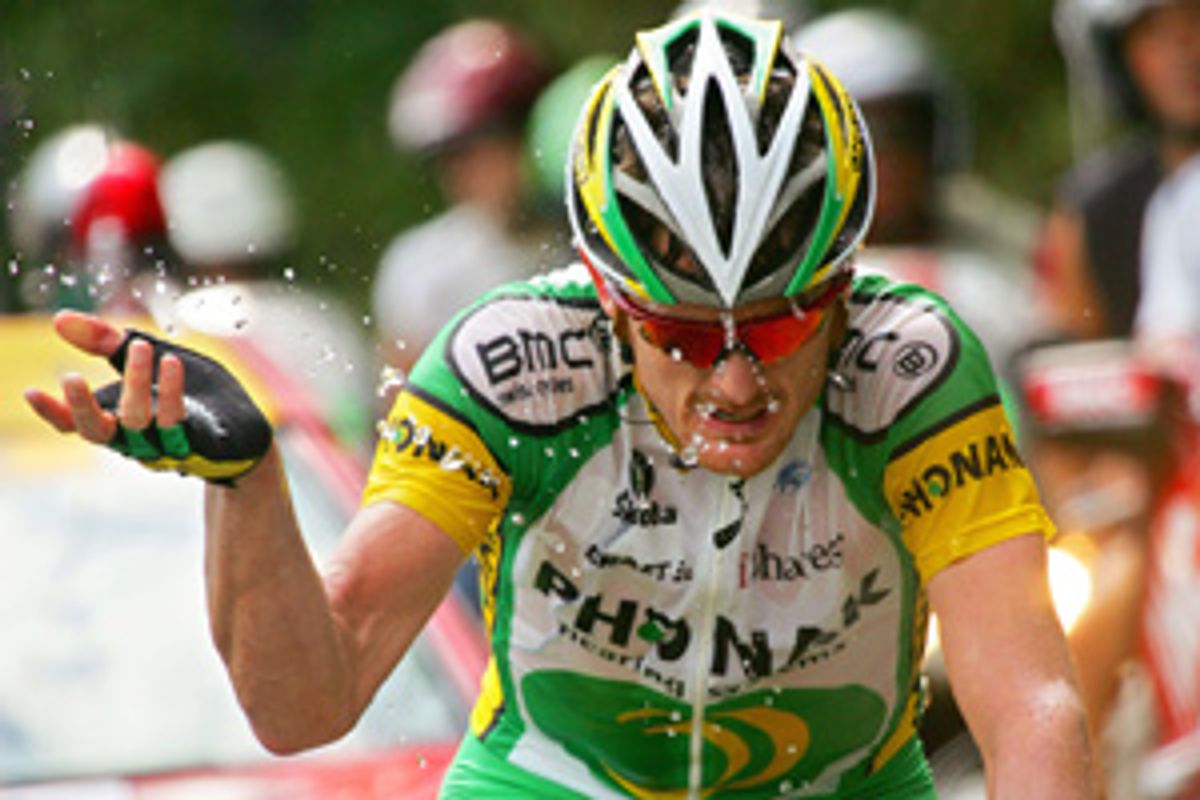 So much for the new hero?

Not necessarily. Not yet, but Thursday's shocking news that Tour de France winner Floyd Landis had tested positive for elevated testosterone levels is exactly what the sport of cycling didn't need this week. Or ever.

Shocking yes, surprising no. The Tour de France and the sport of cycle racing are neck deep in a seemingly endless round of doping scandals. If this keeps up, it'll be deeper than neck deep soon enough.

Landis' team sponsor, Phonak Hearing Systems, announced on its Web site Thursday -- the site is down at this writing -- that it had been notified Wednesday of the rider's Stage 17 sample containing "an unusual level of testosterone/epitestosterone." Phonak, saying both the team and the rider were "totally surprised," suspended Landis Thursday, a routine move pending a backup test.

The Alpine 17th stage, run on July 20, was the one in which Landis, 30, staged a remarkable comeback that many cycling observers called the greatest ride in recent Tour history, by which they meant "recent" in the European sense, maybe a half-century. Winning the Alpine stage a day after dropping to 11th place overall, Landis rebounded to third place. He regained the yellow jersey two days later.

Interest in the event, as judged by television ratings, plummeted this year -- not just in the United States but in cycling hotbeds France and Germany -- with Armstrong's absence and yet another doping scandal. But Landis' incredible story, winning the grueling event by overcoming a degenerative hip condition that will require replacement surgery, had set him up as a star who could attract interest in coming years if he were able to return.

He may still be able to manage that trick, and if so, Thursday's news would just be another difficulty for him to overcome, another part of the story. But at some point, the constant beat of the drug scandals is going to damage the sport's reputation beyond repair.

Speaking on ESPNews, John Eustice, the network's cycling analyst, said, "If this is indeed true and it all does come out, it'll be the greatest blow the sport has ever, ever, ever had." But he also cautioned that Landis is a long way from being convicted.

"Every time an athlete has disputed a testosterone test," he said, "they have won. So the test is not quite as reliable as everyone thinks."

The winner of each stage is tested, as is the overall leader and several randomly chosen riders. Landis' positive test was on his "A" sample. He won't face discipline from the International Cycling Union unless the backup "B" sample also comes back positive in the next few days. Phonak says it'll fire the rider if that happens.

Eustice pointed out that it doesn't make sense for Landis, who has a reputation as a clean rider, to have doped before going all-out to win a stage, knowing he'd then be tested. He also pointed out that Landis has been taking legal cortisone shots, which can boost testosterone levels and fool the test, and that a top rider with a chance to win the test would likely be a little more creative than just doping up on testosterone.

"Testosterone is something that's fairly easily found," he said. "It's not like it's some complicated blood-doping scheme that somehow the laboratory figured out at the end. This is something real straightforward. It just doesn't seem to fit in the approach of someone who's going to win the Tour de France."

Phonak, a Swiss company, was already ending its sponsorship of the team, having tired of the drug scandals that have become synonymous with the sport. Phonak was Tyler Hamilton's sponsor when he tested positive in 2004. Other riders have also had positive tests while riding for Phonak, though some of those have been cleared.

Rumors of Landis' positive test had spread Wednesday when the ICU let it be known that an unidentified rider had tested positive and Landis was an unexplained no-show at a Dutch race where he was to have been the star attraction. He also skipped a race in Denmark Thursday.

Organizers at both events say they tried and failed to reach Landis and Phonak for an explanation, though his Phonak teammates had said Landis was in Germany getting treatment on his hip.

If Landis is guilty, it's one more example of the law-enforcement approach to the drug problem not doing much to end the drug problem. The drug cops call it a success when they catch someone, and in some ways it is. But it's a bigger failure that there are still people to catch, lots of them. More of them all the time, it seems.

Most of what ESPN analyst Eustice said about Landis -- he's always had a clean reputation and it would make no sense for someone in his position to dope -- was also said about Rafael Palmeiro.

I'd like to think that Landis' positive test is a false positive, the result of "a natural process or that this is resulting from a mistake," as Phonak put it in its Web site statement. I hope that's the case. But the sport's reputation, alas, leaves me skeptical. And I'm not the only one.

The Associated Press reported that Landis' mother, Arlene, of Farmersville, Pa., said she wouldn't blame her son if he was taking medication to treat his hip pain, but "if it's something worse than that, then he doesn't deserve to win."

Saying she hadn't talked to Floyd since "that hit the fan," she said she was waiting to hear the facts.

"I know that this is a temptation to every rider but I'm not going to jump to conclusions," she said. "It disappoints me."

Not exactly unequivocal support. I'd like to think that if I were accused of something nefarious, my mom would have enough confidence in me to tell the AP, "He's innocent. I just know this is a mistake."

Maybe Arlene Landis is a tough cookie who isn't the type to gush confidently about her son. Then again, maybe she's just a realist.