Nostalgic for the pastel-hued '80s TV show? Too bad! This somber action picture bravely defies expectations and gives us something wholly new. 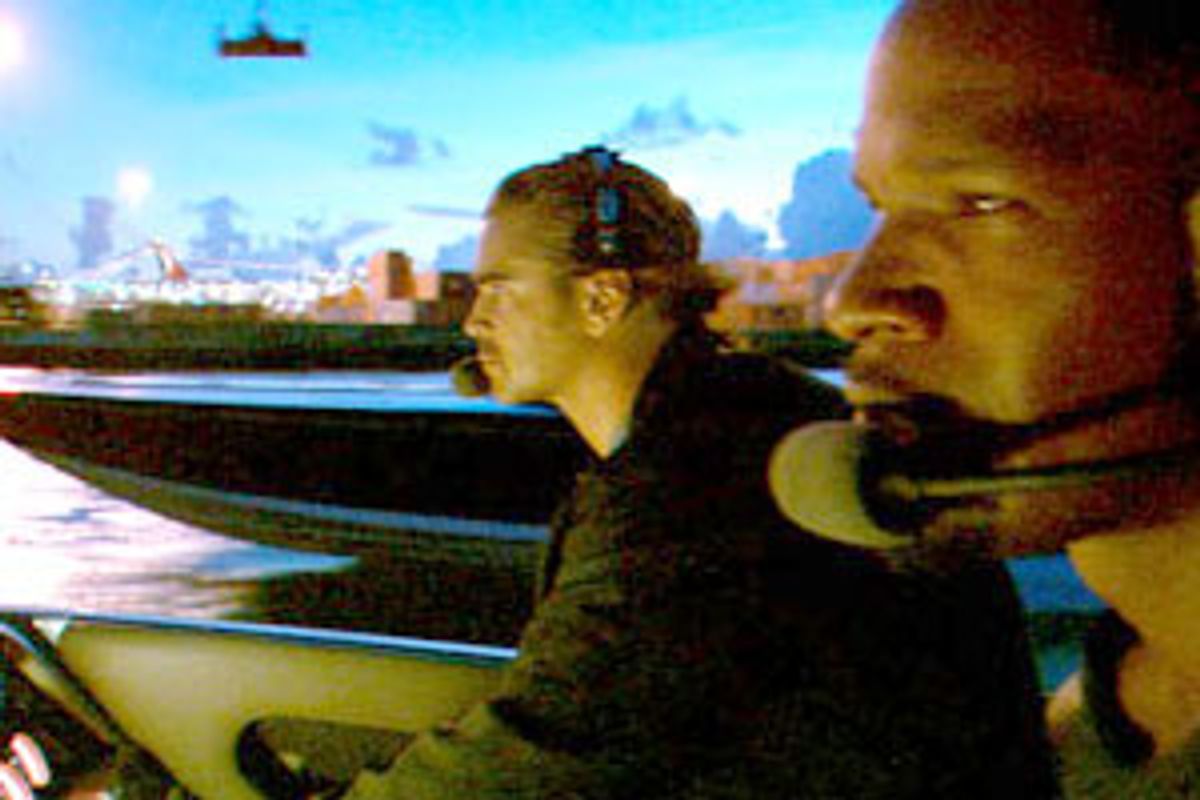 A few years back, a screenwriter friend of mine was pitching one of her original screenplays to an agent. The agent loved the script, but informed my friend there was no way she could sell it -- "There's no pre-awareness," she said. When my friend asked what on earth that could possibly mean, the agent explained that the script wasn't based on a TV show, or a book, or an earlier movie -- in other words, it was based on an original idea and not on something that people had already heard of. There was no familiar set of coattails to affix it to. No one would bite.

One of the lessons here is that Hollywood knows exactly what the public wants -- until it doesn't. In the past year, almost every media outlet that covers entertainment has contained a quote from some Hollywood type banging the tragedy gong because box-office figures are down. And they are down, but only from the outrageous highs of 2004. Now the studios are scrambling to give us what they think we want, a problem because not even we know what we want: Hollywood has colonized our expectations to the point where we don't know what we expect anymore. We watch movie trailers and yawn, thinking we've seen it all before -- even when, upon seeing the actual movie, we realize we haven't. Most movie trailers are edited to make the movie they're selling resemble some other movie that found box-office success. Because pre-awareness sells! Except when it doesn't.

The parade of summer-movie concepts over the past few years has been dominated by remakes of TV shows, a kind of comfort food for modern moviegoers who are nostalgic for all the fun they had watching TV as kids. "Bewitched," "Starsky & Hutch," "The Dukes of Hazzard," the "Mission: Impossible" franchise: "Pre-awareness" guaranteed that these movies would sell themselves, although it didn't mean audiences would actually like them (and in many cases, they didn't). So on the surface, the idea of Michael Mann's directing a movie based on the '80s cop show "Miami Vice," created by Anthony Yerkovich (and executive-produced by Mann), might have been of a piece with these other TV remakes. And yet most moviegoers I know looked at the cast, and the director, and hoped against hope -- and against their experience of previous TV remakes -- that the movie would be good.

"Miami Vice" is good, although perhaps not simply good: This is a fascinating picture, and sometimes a perplexing one, an action picture with a personal sensibility behind it -- it's not just driven by the voices of some unseen marketing committee. The picture is almost nothing like the TV show it's based on. Mann defies nostalgia instead of stroking it: The "Miami Vice" of television was all creamy pastels and sun-drenched vistas, a luxe travel-poster fantasy with just a few sprinkles of danger thrown in. But Mann's movie comes from, and shows us, a very different world. This is a somber action picture, one that understands the thrill of stylish violence but also reckons with the weight and meaning of that violence -- its machismo is laced with regret. The movie's palette is mostly browns, grays and deep-evening blues: Mann and cinematographer Dion Beebe (who also shot Mann's last feature, the astonishing-looking nocturnal odyssey "Collateral") used high-definition cameras to give us colors that sneak up on us, instead of popping out at us. In "Miami Vice," the air feels thick, even when the sun is shining. The camera picks up not just the details of a landscape -- ribbons of nighttime highway lit by the false certainty of headlights, empty lots bordered by sinister-looking warehouses -- but something far more subtle: the feeling that something's always about to happen.

There were times, watching "Miami Vice," when I would peer at the screen, certain that I didn't like what I was seeing; the next minute, I'd find myself compelled to wade deeper into the world Mann had put before me, wanting to know more about its messy secrets. Mann wrote the script, and although the details of the plot are sometimes hard to follow, he does manage to get at the idea of a criminal world as a townscape of overlapping neighborhoods, populated by interlocking chains of middlemen, thugs, informants and bureaucrats. When an informant whom Sonny Crockett (Colin Farrell) and Ricardo Tubbs (Jamie Foxx) have handed over to the FBI winds up with his cover blown -- he's played, with desperate soulfulness, by John Hawkes of "Deadwood" -- the feds request that the Miami cops step in undercover to continue a Colombian drug sting that's about to go south. Their contact man, José (John Ortiz), is just a front for the kingpin, Montoya (Luis Tosar). And even higher up in the organization than José is Isabella (Gong Li), who expertly handles Montoya's business deals, and who has earned his trust in bed as well.

During business hours, Isabella wears dark, narrow suits, so sharply tailored they look poised for takeoff, like a fighter jet; she gives the orders, and the underlings listen. Li vests Isabella with something like imperious vulnerability -- she's ice-cold and meltingly tender at the same time. Crockett seduces her -- it's part of the plan -- but it's no surprise when his calculated wooing turns into the real thing, which puts himself, his partner and the whole operation in jeopardy.

Foxx and Farrell give sturdy performances, although they're not reprising the characters of the TV show in any significant way: Their Crockett and Tubbs are wholly new inventions, keyed to the mood of this complete reimagining of the original material. But there are some crucial things missing from this "Miami Vice." Most notably -- and strangely -- there's very little interplay between Crockett and Tubbs. We get a sense of what their love lives are like: Tubbs has a steady girl, the sharp-witted intelligence analyst Trudy Joplin (played by Naomie Harris, the marvelous English actress most recently seen as the witch-woman in "Pirates of the Caribbean: Dead Man's Chest"), and the two of them have some terrific, funny-tender scenes together. And Farrell and Gong make their characters' tentative courtship feel believable and significant. Even with the limp dialogue Mann sometimes gives them (at one point Crockett looks at Isabella with deep-Irish mournfulness and says, "This is a bad idea, and it has no future"), the two actors create a miniature universe of unlikely romance that's strong enough to cradle them both.

But "Miami Vice" needs to be a love affair, of sorts, between Crockett and Tubbs, and their friendship feels barely limned, let alone defined. And somehow, Farrell ends up with most of the big, memorable scenes (many of which he plays with Gong); Foxx's Tubbs, aside from a few starkly resonant scenes with Harris' Trudy, sometimes seems like a secondary character. And while there are places where Mann's style of dialogue feels perfectly in sync with the action and the story, there are others where his Zen koans of manliness (lines like "I don't know what case you have him on. But whatever it is, it is going bad. And it's going bad right now") are giggle-inducing. It's possible to hard-boil your language a little too much, leaving nothing but shell.

Then again, thank God for movies with flaws, for pictures that don't turn slick, perfunctory professionalism into a kind of religion. "Miami Vice" doesn't necessarily plumb deep themes. But Mann -- who has made such a range of movies it's hard to pin him down, although people generally think of him as an explorer of "masculine" ideas -- turns "Miami Vice" into an exploration of tone and mood, and he makes that enough. The violence in "Miami Vice" is jarring, unsettling and beautifully executed. So often in movies, even action that's well done seems flat and faceless, as if the filmmakers had forgotten that it's OK -- preferable, even -- to have a point of view. In "Miami Vice," Mann's violence has context; he puts feeling into it, which is not to say he sentimentalizes it. When a federal agent shoots a baddie in the head -- the timing of the shooting, a beat ahead of when we expect it, is wondrous in itself -- his brains splash onto the wall behind him, only to dissolve into a nearly invisible spray of blood droplets. The brutal beauty of the image isn't a contradiction to its horror, but a component of it -- because even as we're shocked by this killing (the very suddenness of it is enough to make us gasp), we don't get a cathartic thrill from it. The sequence is grounded in the temporal: Life was there one minute, and it isn't the next. All that's left to show for it is a spatter of droplets, like a bleak rainbow briefly materializing through a sun shower.

In an early sequence in "Miami Vice," a car is shot through with bullets, and Mann shows us the carnage from the inside: Bullets rip through the upholstery, displacing bits of stuffing; the men in the front seat rattle and shiver before they die. The sequence is horrifying, but it's also lashed with a sense of awe. Even the sound design in "Miami Vice" (supervised by Elliott L. Koretz) has been handled with great care: In a massive shootout, the gunfire registers as a muted popping sound -- it's so quiet, it almost seems benign, as if the accompanying bullets couldn't possibly do what they were designed to do.

Mann's approach doesn't soften the brutality: By keeping things quiet, he makes the violence more immediate rather than less. "Miami Vice," like "Collateral" before it, is a decidedly nocturnal picture: Although there are a few daytime scenes, it's most at home in the hush of nighttime, where most of the illumination comes from lights along the highway and the occasional sliver of moon. There's lots of sun in Miami. But in "Miami Vice," it exists mostly as a distant memory, a thing left over from yesterday. Night is the only today that's left.