The Times' endorsement of his challenger is more bad news for Lieberman. But Connecticut Democrats have been thinking about a divorce for years. 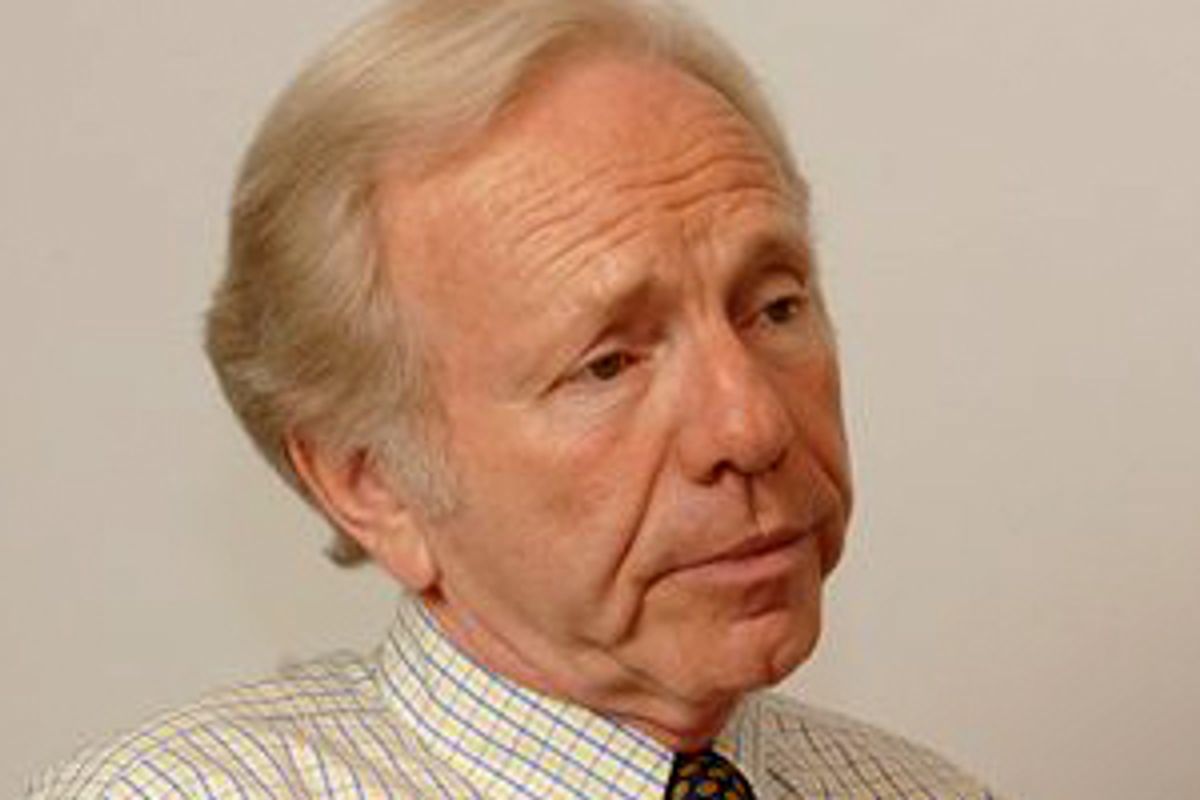 On Sunday, the two most influential newspapers in Connecticut issued endorsements in the Democratic primary race between U.S. Sen. Joseph Lieberman and Greenwich businessman Ned Lamont.

The Hartford Courant offered a tepid endorsement of the incumbent, arguing that since the war is only one issue and Lieberman votes with his party 90 percent of the time, there isn't enough reason to turn him out of office.

What the New York Times said, on the other hand, was momentous. The editors endorsed Ned Lamont, accusing Joe Lieberman not just of shilling for George Bush's war, but of providing Bush cover for his abridgement of civil liberties and expansion of presidential power. Whatever momentum Lieberman might've gained from Bill Clinton's recent drive-by in Waterbury had been slowed with a few sharp words from the paper of record.

But newspaper endorsements have a notoriously iffy impact on political races. Though they can be used to good effect in advertising, it's tough to find a voter who will admit to having been swayed by an editorial. Besides, both papers emphasized Lieberman's support for the Iraq war, which I think misses the point. The reasons for Connecticut's disenchantment with its junior senator long predate the invasion of Iraq or that kiss on the cheek from George Bush or even his strange crush on the whole Bush administration. Lieberman and his home state Democrats have been slogging for years through a troubled marriage, a slow, painful breakup straight out of an Ingmar Bergman movie. Indulge me in a little history.

In 1979, Joe Lieberman was the majority leader of the Connecticut state Senate. That august body took up, as it did every year, a bill that would have allowed people to create living wills so that their families would know their wishes as they lay dying.

The lobbying arm of the Catholic Church fought and beat the bill every year. During the long-winded 1979 debate, as Joe Lieberman sat listening to a Catholic colleague denounce the bill as "man playing God," a 25-year-old newspaper reporter plopped down in a chair next to him.

"Why does it always break down that way?" the reporter whispered. "The more conservative argument always invokes God. The liberals always insist that God has no place in a debate in an American state legislature." (Lieberman was playing nanny that year to a group of rookie liberal senators, mostly disciples of Rep. Toby Moffett, and one after the other they were rising to argue for separation of church and state.)

Lieberman whispered back and forth with the reporter. "Why doesn't somebody make the argument," the reporter asked Lieberman, "that medical science has exceeded the will of God by keeping people alive when they're supposed to be dead? Why not suggest that living wills represent a kind of restoration, allowing people to live in communion with the will of their Maker?"

At that, Lieberman fixed the reporter with a serious look and said, "That's the most interesting thing anybody has said to me all session."

The reporter brightened at such praise, only to watch in disappointment as Lieberman voted against the bill, which failed again.

I was that young reporter. Call it the beginning of my education about Joe Lieberman. Sometimes what he says has nothing to do with how he'll vote.

A few years later, the state legislature passed the damn bill. My mother now has a living will, which is a good thing because she's near death. I spent last Thursday talking to nurses about nutrition and hydration. I spent part of Friday talking to Michael Schiavo, who came to Connecticut to endorse Ned Lamont. In 2005, on "Meet the Press," Lieberman argued that Congress had a legitimate function in preserving Terri Schiavo's 14th Amendment right to due process and in safeguarding her life and liberty.

"I would have kept the tube in," Lieberman said. After 27 years, he is still tracking right on end-of-life issues.

"You can't defeat an incumbent in America," says David Pudlin, a Lamont supporter. "If they want to come back, the rate of return is closer to 100 percent than it is to any other number. We remember the ones who didn't make it, and it usually involves financial malfeasance or sexual peccadilloes of a pretty unusual magnitude."

Lieberman is not in danger of losing the Democratic nomination because of any scandal, says Pudlin, a former majority leader in the Connecticut House of Representatives. "Of all things, it's about issues," insists Pudlin wryly. "That's almost un-American, if you follow electoral politics. It's simply not done."

Lieberman's years in public life have been a steady drumbeat of disappointment for Connecticut Democrats, a liberal lot who do not share his often conservative views. End-of-life issues are just one example. In 1992, the state's Democratic voters picked Jerry Brown over Bill Clinton in the presidential primary. Lieberman, meanwhile, spent the 1990s joining cultural conservative Bill Bennett in a kind of Sherman's March through American culture, handing out Silver Sewer awards for sex and violence and denouncing such pornographic abominations as "Married  With Children."

Tag teaming with Bennett was one of the senator's early experiments in what he calls "bipartisanship," which often entails adopting Republican positions without leveraging any concession from the other side. Tell me how Bill Bennett moved toward the middle to accommodate Joe Lieberman. Pretty much the way Bush and Cheney moved to the center to meet Democrats on Iraq. Not at all.

Yet Lieberman's reputation in Connecticut is not purely that of an out-of-step conservative. It's much more complicated, and frustrating, than that. He's a serial raiser and dasher and re-raiser of hopes.

Gays trust him because he's voted with them on a lot of big issues, but they don't trust him because he voted for the Defense of Marriage Act in 1996. Once he even collaborated with Sen. Jesse Helms on a measure that would have stripped federal funding from public schools that counseled suicidal gay teens that their lifestyle was OK.

Women trust him because he's a reliable vote for abortion rights and don't trust him because he went off the reservation for the only significant vote (cloture) on the Supreme Court nomination of Samuel Alito. During the recent debate over requiring hospitals to provide emergency contraception for rape victims, Lieberman emitted a shockingly callous, and now famous, sound bite. He said it's never more than "a short car ride" in crowded Connecticut to a more accommodating hospital.

That's just the beginning of the catalog of gripes. Long before there were those TV love fests with Fox's Sean Hannity that so enrage lefty bloggers there were earlier love fests with none other than Pat Robertson. On the apocalyptic evangelist's "700 Club," Lieberman complained about moral relativism, said there was too little religion in public life, and said he was pleased that people of faith were taking their principles into the political arena. In 2003, Connecticut political writer Paul Bass chronicled the scramble by the senator's staff to scrub his image from a fundraising infomercial (also starring Robertson and Jerry Falwell) for a conservative religious group with which he had been involved. His 2004 campaign for the presidential nomination was so pitched toward the conservative, moralistic, Southern elements of the party that I jokingly suggested the slogan: "He may be a Jew, but he's a better Christian than you are."

Then there's his famous 1998 denunciation of President Clinton, followed by his relatively hands-off approach to the darker, ultimately criminal scandals embroiling Connecticut Gov. John G. Rowland, with whom Lieberman maintained one of his famous bipartisan friendships. Nobody talks about it much, but there's also a sour feeling among Democratic state office-seekers that Lieberman's campaign help was often not to be found, especially as his own ambitions turned national. "Let's put it this way," one politician said to me. "There aren't a lot of people who use the phrase 'after all he's done for me' in explaining why they support Joe."

Covering Lieberman is a good way to understand how misleading a voting record can be. (Are you listening, Courant editorial board?) Most members of Congress vote with their parties the preponderance of the time. There are other questions to ask. Did he vote differently on a much-more-important earlier amendment or cloture motion? Did he wait until it was clear his vote wouldn't hurt the other side? Are his public pronouncements strangely different from his votes?

Consider Lieberman's behavior during the confirmation of Clarence Thomas 15 years ago, well documented in this article from the political newsletter Counterpunch. Lieberman spoke avidly on behalf of Thomas and disdainfully about Democratic colleagues whose opposition was, he thought, too political. He was pretty much the last senator to commit to a nay vote, and only when his vote didn't matter.

Lieberman wound up with no points against his license for Voting While Republican, even though he supported Thomas actively till the 11th hour. Interestingly, one of his arguments was that Thomas should be judged only on his actual decisions, not on his speeches or writings, a principle Lieberman would probably like to extend to himself these days. In areas such as affirmative action and school vouchers, Lieberman's public statements have caused him more trouble among Democrats than any vote he has cast.

What has saved Lieberman, time and again, has been his famous charm and affability. When politicians and activists march into his office to complain about something he's done, they walk in mad and emerge calm.

He's done it to me too, and it's more than smiling and nodding. Lieberman really seems to be listening and considering the possibility that you're right and he's wrong. And he usually makes it clear that he still likes you, even though you sharply differ with him.

That charm and affability have deserted him this summer. The 2006 Joe is one angry guy. One of the first signs was an explosion on my radio show this March. Lieberman hadn't liked a column I had written the previous Sunday, and he blew up at me. The audio clip went all over the Internet on blogs such as Daily Kos and Firedoglake, which marveled at the crack in Joe's legendary composure and crowed, "He's losing it!"

He never really got his smile back. You might call that a political miscalculation, but I don't think he can help it. Lieberman is truly appalled by the number of former friends who are now foes. He can't hide it. It's all over his face.

For years, the natives around here have been a little restless about Joe Lieberman. Shortly after 2000, I started to hear rumblings about the idea of running a progressive against him, but he was too powerful and too popular. Nobody saw the point of trying.

The New York Times and other national media outlets are right that the Iraq war -- this deeply unpopular, catastrophic adventure -- is what finally made the natives brave enough to act, and what may have ended Joe Lieberman's tenure as a senator. But people in Connecticut know the war was only the tipping point. They have long memories of everything that came before.