Echoes of the Nixon era

Arlen Specter's FISA bill would put President Bush above the rule of law, just as an earlier president would've wanted. 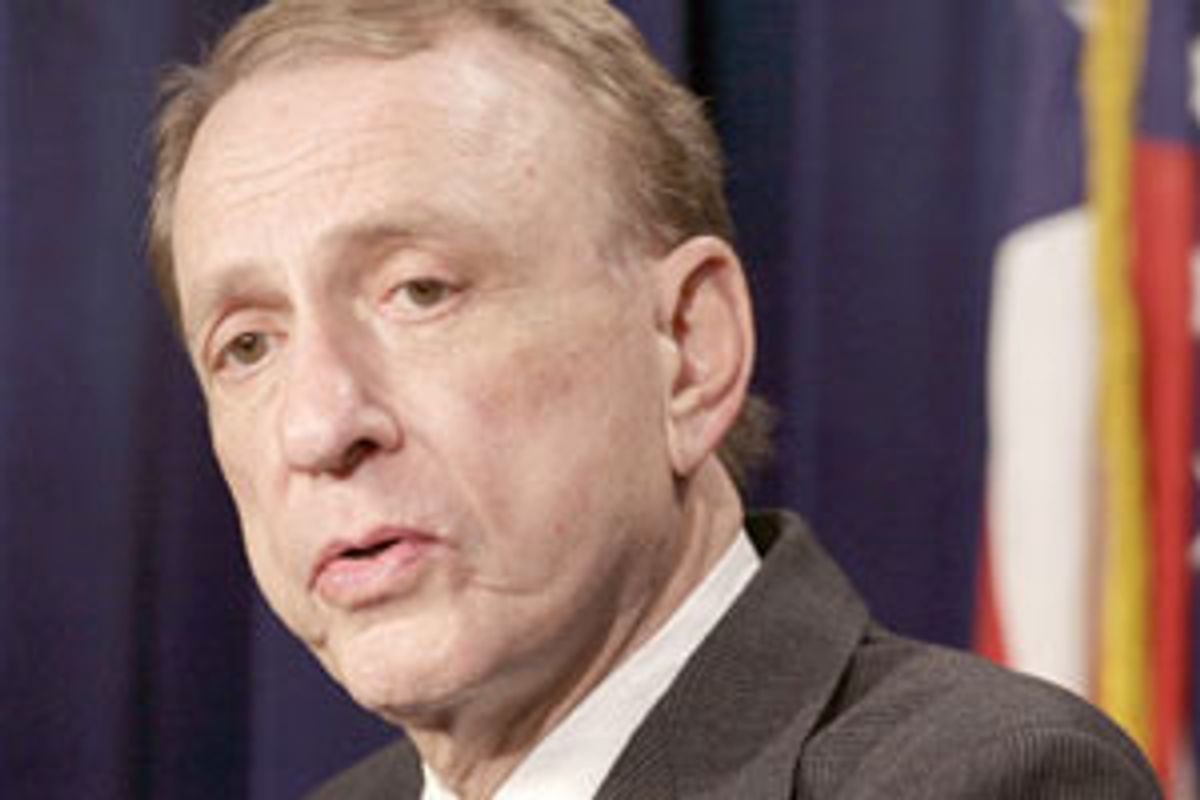 With one piece of legislation, Sen. Arlen Specter seeks to expand the Bush administration's radical theory of executive power beyond the wildest dreams of Dick Cheney or even John Yoo. Just when it looked as though some semblance of checks and balances was being restored, Specter -- the Pennsylvania Republican who masqueraded for months as a tenacious opponent of the White House -- offers a bill that would strike an immeasurable blow for the Bush vision of an imperial presidency.

Specter's bill (S. 2543) is titled the National Security Surveillance Act, and it is framed as a series of amendments to the Foreign Intelligence Surveillance Act, known as FISA. The Senate approved FISA in 1978 in the wake of decades of eavesdropping abuses by the executive branch under both parties. FISA allowed aggressive eavesdropping by the president against terrorists and other enemies of the United States, but required that it be conducted with judicial oversight to ensure this awesome power would no longer be abused.

In reality, Specter does not want to amend the mandates of FISA so much as abolish them. His bill makes it optional, rather than mandatory, for the president to subject himself to judicial oversight when eavesdropping on Americans, in effect returning the nation to the pre-FISA era. Essentially, the president would be allowed to eavesdrop at will, precisely the situation that led to the surveillance abuses of the Nixon White House and J. Edgar Hoover's FBI.

Specter's bill will have three troubling consequences if it becomes law. First, it makes lawbreaking legal. When the New York Times revealed last December that the Bush administration has been eavesdropping without judicial approval for the past four years, it meant that the president has been systematically violating a law that makes such eavesdropping a crime punishable by up to five years in prison. If laws are to have any meaning, then elected officials cannot simply violate them with impunity. Specter's bill not only virtually guarantees there would be no consequences for this deliberate, ongoing criminality, but rewards and endorses the president's lawbreaking by changing the law to conform to the president's conduct.

Richard Nixon infamously told David Frost in a 1977 interview that, by definition, "when the president does it, that means it is not illegal." Specter, in effect, wishes to make the Nixonian theory of presidential infallibility the law of the land. In the process, he also embraces a more modern and equally extreme theory of presidential power, and that is the second alarming implication of his bill.

Specter's proposal is based on the plainly erroneous -- and truly radical -- premise that Congress has no power to regulate presidential war powers, as spelled out in Article II of the Constitution. That is the John Yoo/David Addington "president as monarch" theory that the Bush administration has been peddling to justify everything from the lawless detention of U.S. citizens to the use of torture as an interrogation tool to the president's deliberate violations of U.S. law governing eavesdropping.

Recent judicial decisions have signaled that the federal judiciary is increasingly willing to do what Congress has so glaringly failed to do in the Bush era -- that is, impose minimal limits on presidential power. The Supreme Court's recent decision in Hamdan v. Rumsfeld was hailed as a historic victory for the restoration of checks and balances. The narrow result of Hamdan was to declare illegal the Bush administration's military commissions at Guantánamo on grounds that they violated congressional law requiring that such tribunals conform to the Geneva Conventions. But the broader significance of Hamdan was that it reaffirmed the principle that the president is bound by the restrictions imposed on him by Congress, even with regard to the exercise of his war powers. In doing so, the Court rejected the radical Bush claim to unchecked presidential power in the area of national security.

Specter's bill single-handedly reverses the judicial pushback. With his proposed FISA bill, the senator takes the constitutionally guaranteed congressional power that was just reaffirmed by the Supreme Court and gives it back to the president. It was precisely this theory of unchecked presidential power that the Hamdan decision rejected as alien to the Constitution. Yet Specter's bill, at its core, endorses that theory, and Specter himself, in a Washington Post Op-Ed, justified his bill by espousing this view of unlimited presidential power. Specter argued: "The president's constitutional power either exists or does not exist, no matter what any statute may say."

Specter's justification for his bill is simply wrong as a matter of constitutional law. As Georgetown law professor Marty Lederman put it, Specter's constitutional argument is "utter malarkey" and rests on nothing more complex or noble than a "basic misunderstanding of modern separation-of-powers doctrine." Congress unquestionably has the power -- and has always had it -- to regulate the exercise of numerous presidential powers. Indeed, when Attorney General Alberto Gonzales testified before Specter's Judiciary Committee, even he told Specter that it is false to claim that Congress lacks the power to regulate or restrict "inherent constitutional powers" of the president:

GONZALES: Well, the fact that the president, again, may have inherent authority doesn't mean that Congress has no authority in a particular area. And when we look at the words of the Constitution, and there are clear grants of authority to the Congress in a time of war.

Specter may not get it -- the main debate among law bloggers recently has been whether he really doesn't get it or is just pretending. Bush's handpicked attorney general, however, does get it.

But such discussions may be moot, if Specter has his way. The third and worst thing that Specter's bill would do is place the president's FISA decisions beyond any kind of meaningful judicial review forever, and immunize the Bush administration from any real scrutiny of the legality and constitutionality of its conduct. By design, it would all but kill the various lawsuits pending around the country that allege the president and various telecommunications companies acted illegally when they intercepted the communications of Americans without the warrants required by law.

Ever since the Bush administration's more legally dubious behavior came to light (such as torture, extraordinary rendition and warrantless eavesdropping), blocking judicial review of this conduct has been its paramount objective. To do so, the administration has continuously invoked the "state secrets" doctrine -- a legal weapon that presidents have used in very rare cases to block courts from adjudicating particular legal disputes on the ground that doing so would risk disclosure of vital state secrets. Because federal courts traditionally assume that the president acts in good faith when relying on this doctrine, they virtually always accept the government's argument. The Bush administration took what was a rare instrument and has used it to block virtually every judicial challenge with great success -- until very recently.

In two federal cases -- one brought by the Electronic Frontier Foundation against AT&T in San Francisco, the other brought in Michigan by the ACLU against the Bush administration -- the presiding federal judges have strongly signaled that they intend to scrutinize, rather than blindly defer to, the Bush administration's legal arguments in defense of its NSA warrantless eavesdropping program. And in a remarkable ruling in the EFF case last week, the court emphatically rejected the Bush administration's invocation of the "state secrets" doctrine and refused, at least for now, to dismiss the lawsuit -- the first time a federal court has squarely rejected a president's assertion of this claim. Along with Hamdan, this ruling leaves no doubt that courts are finally resisting the Bush administration's attempts to place its conduct beyond the reach of the law.

First, the bill requires that all pending cases challenging the legality of the NSA program be transferred to the secret FISA court, if the attorney general so desires, which he will. Second, it makes judicial review of the administration's behavior virtually impossible, as it specifically prohibits, in Sec. 702(b)(2), the FISA court from "requir(ing) the disclosure of national security information ... without the approval of the Director of National Intelligence of the Attorney General." That all but prevents any discovery in these lawsuits. Third, it authorizes, in Sec. 702(b)(6), the FISA court to "dismiss a challenge to the legality of an electronic surveillance program for any reason." Arguably, that provision broadens the authority of the court to dismiss any such lawsuit for the most discretionary of reasons, even beyond the already wide parameters of the "state secrets" doctrine.

Beyond its impact on those pending cases, the Specter bill would virtually ensure that all legal questions relating to warrantless eavesdropping -- including the question of whether warrantless eavesdropping violates the Fourth Amendment's requirement of probable-cause warrants for all searches -- be decided by the FISA court, which means that 1) only one side would be present in court to argue these issues (the Bush administration) and 2) all proceedings, including the decision itself, might very well be secret.

It is one thing for specific warrant applications to be conducted in secret, with only one side present, and with even the decision itself always sealed from the public -- the standard operating procedures for the FISA court. But those procedures are plainly inappropriate for deciding critical questions of constitutional law that determine the protections guaranteed by the Bill of Rights to all Americans against the government. The parameters of the Fourth Amendment and decisions as to whether our highest government officials have been continuously violating it cannot possibly be determined in secret and then kept secret from American citizens. Yet the Specter bill would ensure exactly that disturbing, and quite extraordinary, result.