This thriller about books, belief and betrayal covers topical terrain -- JT LeRoy and James Frey, anyone? -- but itself proves unbelievable. 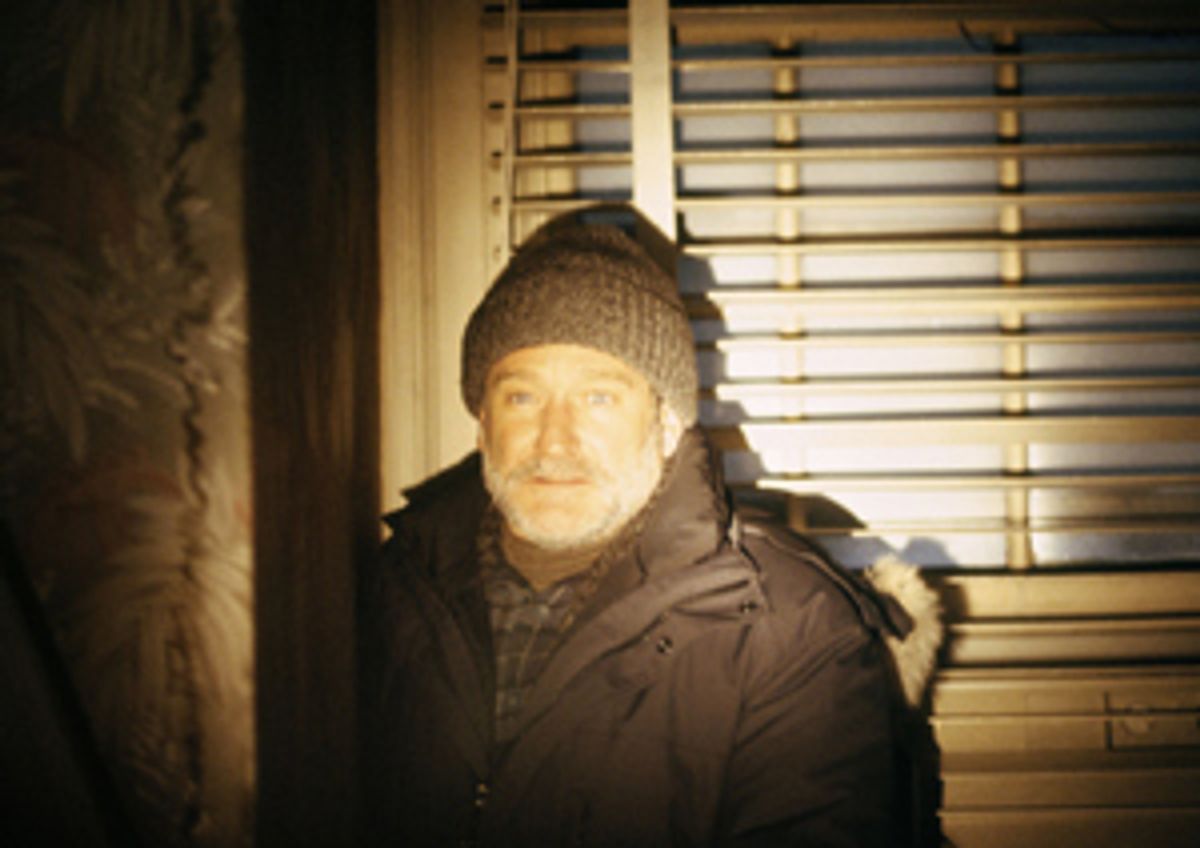 Patrick Stettner's film version of Armistead Maupin's novel "The Night Listener" starts out as a gentle, thoughtful picture about the ways we long for different kinds of love -- romantic love, familial love -- and about how, when a particular type of love is lacking in our lives, we find ways to invent it for ourselves. Robin Williams stars as Gabriel Noone, a radio personality who has made a name for himself by telling stories, in a soothing, deep-midnight story-time voice, that are culled largely from his own life. But he's hit a rocky point in that life: His lover of 10 years, Jess (Bobby Cannavale), has just left him, and the material he's writing, and reading, just doesn't sound right to him anymore. An editor friend, hoping to jolt him out of his malaise, gives him a manuscript to read, a memoir written by a 14-year-old boy who suffered years of grotesque sexual abuse at the hands of his parents, and who now lives with the social worker who's adopted him.

Gabriel is taken with the memoir, and when the kid, whose name is Pete (he's played by Rory Culkin, whose voice has a dozy creepiness), contacts him by phone, he strikes up a phone-and-mail friendship with the boy that evolves into a kind of parental protectiveness. Pete's adoptive mother, Donna (Toni Collette), completes the familial circle, keeping Gabriel apprised of Pete's health issues: The boy contracted syphilis when he was 8, and he now has AIDS; recently, he's been spending a lot of time in the hospital.

But there are angles of Pete and Donna's story that don't add up, and Gabriel, needing to believe in the reality of Pete's story, finds himself both seeking the truth, and not wanting to know it. Maupin's novel was based on personal experience. (Listen to Maupin discuss the book with Salon here.) He received a manuscript from a young teenager who claimed to have survived horrific abuse, and the two began a correspondence that lingered even after Maupin began to have serious doubts about the kid's very existence. But under Stettner's guidance (he also directed the 2001 "The Business of Strangers"), the complex feelings Maupin must have faced in untangling this wrenchingly personal mystery don't survive the trek to the screen. (The script was written by Stettner, Maupin and Terry Anderson, Maupin's ex-partner, who was the first to point out to Maupin the possibility that the kid he'd become so emotionally attached to might be a fraud.) The picture is at its best in its quietest moments: Williams, as a man standing on the far shore of middle age, is particularly touching in his scenes with the younger Cannavale. Gabriel and Jess confess to each other that they'd started out simply wanting to take care of each other, a motivation that somehow wasn't enough to sustain them forever, and you can feel the waves of regret radiating out from the older to the younger, and vice versa.

But the picture skitters into howler territory as Gabriel becomes more and more obsessed with proving the veracity of his young friend's story: By the time he's caught breaking and entering the kid's house, just to get closer to that mysterious heffalump known as the truth, we're left wondering why he just can't accept that he was duped. And while Toni Collette, an actress of stupendous gifts, can probably do just about anything, that doesn't mean she should do just anything. In "The Night Listener" (here comes a big spoiler), she gets the thankless role of Crazy Blind Person. The demonic gleam in her (supposedly) sightless eyes, as she slips into a sweater she's knitted for herself and wants to show off to Gabriel, leaps far over the line of believable wackiness.

"The Night Listener" stretches its tentacles toward some themes that have recently become very topical, in the wake of revelations about how JT LeRoy and James Frey captured our sympathy with made-up stuff. The intentions behind "The Night Listener" are solid: It strives to explore the way we feel betrayed and confused when we form a connection with people that's based on deception -- and the way we often yearn to hang onto the connection even after we know the truth. But on the way to exploring those kinds of subtleties, "The Night Listener" takes the most thuddingly obvious routes, ending with a canned, dried-up nugget from that childhood fave "The Velveteen Rabbit": "Real isn't how you were made; it's a thing that happens to you," Gabriel tells us in voice-over. But the experience of watching "The Night Listener" didn't make me feel "real" at all, only stuffed.