Venezuela's Hugo Chavez has the wallet and the will to keep Cuban socialism running after his friend and role model dies. 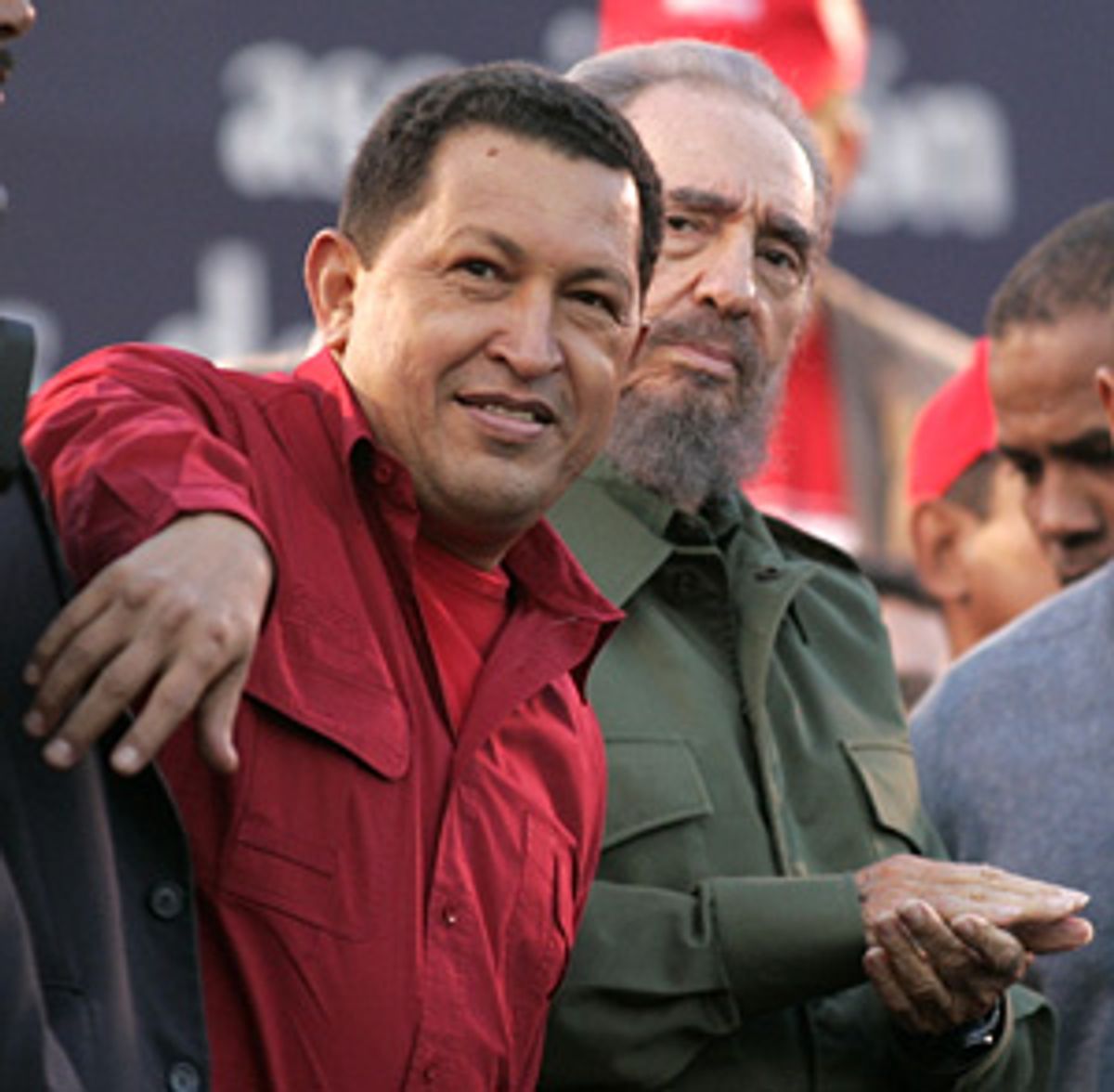 As Cuba inches toward a post-Fidel existence, international attention has focused on the ailing leader and his brother Raul. But it's worth keeping an eye on Fidel's staunchest ally. Venezuelan President Hugo Chavez is likely to pour millions of petrodollars into keeping Cuba socialist.

Chavez is an avowed foe of the Bush administration and the most influential leader in Latin America today. His deep pockets have bankrolled Cuba for the past half decade and shored up the Castro regime. The Venezuelan wants to keep Cuba's power structure intact -- and keep the United States out. "Chavez's message to Cuba is: 'I love you just as you are,'" says Daniel Erikson, director of Caribbean programs at the Inter-American Dialogue, a Washington think tank. "That's music to the ears of Raul Castro."

Of course, what sounds good to Raul gives headaches to George Bush. But then, Chavez enjoys pitting himself against the current American government and specializes in gestures calculated to offend. When he received word of Fidel Castro's illness, the Venezuelan leader was in Hanoi, one stop in a global bash-the-U.S. tour. The previous day he had commended his hosts for their 1960s war with the United States, saying their battles against "imperialism" had set "a big example for the world." Chavez's arrival in Vietnam was preceded by a chummy visit with Iranian President Mahmoud Ahmadinejad, whom he called a "brother and trenchmate." In 2000, Chavez became the first democratically elected head of state to visit Saddam Hussein since the Gulf War. He recently announced he'd like to pay North Korea a visit, too.

Why the urge to stick his finger in W's eye? Chavez has always been a leftist, which guarantees a sticky relationship with the Bush administration. Things didn't really get ugly, however, till 2002, when the Bushies broke open the champagne a bit prematurely after a coup briefly deposed Chavez from the presidency. On his return to power, the Venezuelan stepped up his attacks against the U.S. president, whom he derides as "Mr. Danger."

Chavez has also condemned capitalism as "the road to hell" -- although he hasn't completely eschewed market economics. He does, after all, still sell petroleum to the United States (Venezuela has the largest proven oil reserves outside the Middle East). But Chavez has taken advantage of skyrocketing oil prices to try out some unusual cash-free arrangements. For example, he and Argentine President Nestor Kirchner, a fellow leftist, agreed last year to barter oil in return for Argentine shipbuilding expertise and farm machinery.

The deals are part of Chavez's larger petrodollar diplomacy, which leverages Venezuela's oil wealth to expand his influence in Latin America and help like-minded politicians win elective office. No country has profited more from Chavez's largess than Cuba. He provides the island with 100,000 barrels of oil and refined petroleum products a day. That subsidy will translate into $2 billion this year, according to analysts at the Cuban Transition Project at the University of Miami. The oil shipments not only meet Cuba's immediate requirements but have also provided a surplus that Castro has sold on the open market, generating the hard cash the island economy desperately needs.

Venezuela's generosity, plus increasing investment from countries like China and Spain, enabled Castro to dial back the economic liberalization measures he put in place in the 1990s after the fall of his former sugar daddy, the Soviet Union. And the frenzy is gone from Cuba's desperate post-Soviet pursuit of tourist cash. When the Bush administration imposed tougher economic sanctions on Cuba two years ago, Castro could basically ignore the pressure. He reasserted his authority over the island and laid the groundwork for the posthumous continuation of his regime. In 2002, for example, Castro spearheaded a petition drive to change the Cuban constitution to declare the socialist revolution "untouchable." He also purged pro-reform ministers from the government.

Odds are that a post-Fidel Cuba will adopt some of the trappings of a free-market economy. But Chavez will be a force for instituting as little change as possible. If the Castro brothers pass from the scene and leaders more open to economic reform take over, they may want to be circumspect about economic decentralization, lest they jeopardize the Venezuelan bonanza. "Chavez could say, 'If you change your ways, I'll stop delivering oil,'" says Jorge R. Piqsn, a senior research associate at the University of Miami. "That's a trump card, because without Venezuelan oil the system would collapse."

Some of Chavez's eagerness to keep things as they are in Cuba is due to his strong relationship with Castro. The Venezuelan received a hero's welcome when he arrived in Havana in 1995, shortly after he had been released from jail after masterminding a failed coup in 1992. Chavez has named his own brother Adan ambassador to Havana, and he makes frequent visits to the island. Plus, the Venezuelan seems to look on Castro as a role model. He's hoping to emulate the Cuban's long tenure in power; Chavez recently floated the possibility of staying in office until 2031.

Still, it's not just for sentimental reasons that Chavez would resist changes in Cuban governance. His campaign to see more leftist leaders emerge in Latin America is dependent on the Castro regime. In exchange for oil, Castro has dispatched tens of thousands of doctors to Venezuela and around Latin America to provide medical services in poor neighborhoods. Tens of thousands of patients have been shipped to Havana for eye operations as part of an "Operation Miracle" campaign. "Cuba has been providing the expertise in Chavez's social service delivery," says Erikson of the Inter-American Dialogue. "If that is discontinued, it would undercut Chavez's ambitions."

The Venezuelan's effort to see more anti-U.S. socialist leaders emerge in Latin America resembles Castro's effort to spread the communist revolution in the 1960s. Chavez's efforts have met with more success than his mentor's, but there are limits to his influence. Chavez's ally Evo Morales was elected president of Bolivia last year, but the Venezuelan's anointed candidates in Mexico and Peru came up short in their presidential bids, and they were hurt by anti-Chavez sentiment. Still, Chavez could see a boost to his image in the region if he does clash with the Bush administration over Cuba. "Chavez wants a confrontation with the United States," says Amherst political scientist Javier Corrales. A 2005 Zogby poll found that 81 percent of Latin American elites disapprove of Bush's job performance. A lot of Chavez's appeal stems from whom he has fingered as his nemesis. If the Bush administration does end up very publicly intervening in Cuba, it wouldn't just generate a storm of resentment in Latin America. It would also show, again, how lucky Chavez has been in his enemies.

Alexandra Starr is a freelance writer based in Washington.