Oliver Stone tackles the most harrowing shared experience of our lives -- and it's not the disaster you would expect. 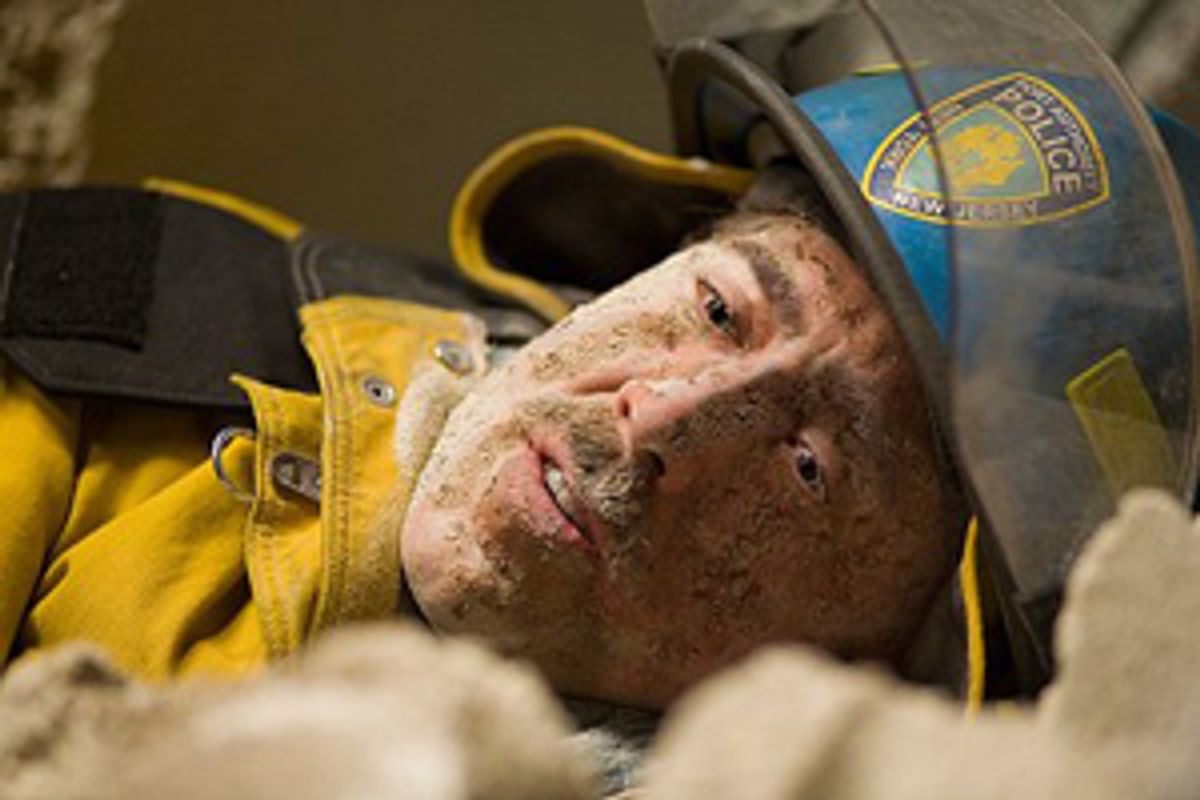 When Oliver Stone thinks, which is possibly not that often, his ideas take the form of gargantuan footsteps. He maps the dimensions of his giant subjects -- the death of JFK, the fall of Nixon, the sprawling ambitions of Alexander the Great -- with a confident, rolling stride. Even if his pictures don't deliver on the greatness they promise, at least their bravado is something to behold, like fraudulent Bigfoot tracks stamped out by a guy with a massive fake foot nailed to the end of a stick.

I doubt anyone was surprised when Stone announced he was going to make a movie about 9/11: It's the kind of mountain-size subject that he just can't resist scaling. "World Trade Center" focuses on the horrific experiences of two real-life Port Authority cops, John McLoughlin and Will Jimeno, who were trapped in the rubble of the collapsed towers, and the anxiety suffered by their families on that day.

In some ways, it's a typically unsubtle Stone movie. Stone can't show New Yorkers (civilians as well as firefighters, policemen and Marines) helping one another through the disaster without later adding a voiceover about how everyone helped each other that day. An early sequence in which inexperienced but dedicated young cops show up at the Twin Towers in the early minutes of the disaster captures the anxious uncertainty on their faces. But Stone also has to insert a shot of a body falling from one of the upper floors, as if the sudden shock on the young cops' faces needed explanation. It doesn't. Over and over in "World Trade Center," Stone acknowledges the importance of showing, as opposed to telling, and then goes ahead and tells anyway. Scene by scene, the picture is practically a treatise on how good instincts can be overridden by bad judgment.

But if movies about 9/11 have to be made at all -- and no one has yet answered the question, for me, at least, of why we should need or want them just yet -- the approach Stone takes with "World Trade Center" certainly isn't the worst kind. The picture doesn't beat you up, like Paul Greengrass' scrupulously made "United 93," a movie that scraped at our feelings of dread and sorrow as we fixated on the experiences of people we knew were going to die. "United 93" is the kind of harrowing moviegoing experience that's supposed to make us feel like better people for having suffered through it. Greengrass didn't want to exploit his subject, and he took the utmost care in every aspect of the filmmaking. But "United 93" was the most punishing movie I've ever seen, not an example of art offering transcendence or deeper understanding, but of picking at a wound that hadn't yet scabbed over. Greengrass approached his subject with a you-are-there immediacy, while Stone settles for old-fashioned dramatization, which may be more honorable. Even when Stone is clumsy, he at least seems to recognize that he can't possibly re-create the experience of these policemen: The best he can do is put it onstage, reminding us that this happened to someone else and not to us.

McLoughlin and Jimeno were two of five Port Authority officers who entered the World Trade Center just before the collapse. All were trapped when the towers fell; the other three officers were killed, but McLoughlin and Jimeno survived, buried for 12 hours under chunks of concrete laced with twisted metal. "World Trade Center" focuses on their experience, enfolding the stories of what their wives and families suffered as they waited for news of their men.

McLoughlin, a sergeant, is played by Nicolas Cage, the go-to actor for roles that require a face capable of showing the weight of responsibility and honor. That face fills the job admirably here: And in most of Cage's scenes, we see nothing but that face; the rest of his body is hidden (and crushed) by debris. Michael Peña, in an ardent, earnest performance, plays Jimeno, a junior officer, who's similarly pinned several feet away: The men can hear, but not see, each other, and their conversation becomes the kind of essential connection that can make the difference between survival and death. The two talk about their families, about the day-to-day responsibilities that make up the fabric of their lives, although "fabric" is the highfalutin name for it -- it's really the kind of workaday crap that becomes inestimably precious when we think we'll never be able to do it again.

McLoughlin grouses about how his wife, Donna (Maria Bello), wanted a new kitchen, and so he's in the process of building one for her. "Right now she has no cabinets, and she's pissed," he tells Jimeno, in a voice that's becoming thick and heavy and weary, as if his lungs were learning to forget what oxygen is like. "So I gotta get outta here." Jimeno tells McLoughlin how he and his pregnant wife, Allison (Maggie Gyllenhaal), have been amiably arguing over baby names: He wants "Alyssa"; she wants "Olivia." He summons a quote from "G.I. Jane" -- "Pain is good; pain is your friend. If you can feel pain, you know you're alive" -- that's applicable to their predicament, and reminisces idly about how "Starsky & Hutch" made him want to be a cop. He even gets McLoughlin humming the show's theme song, and the moment is both funny and delicate, a reminder of the way dumb little details can take up permanent residence in our brains, and also of the way we inadvertently take life lessons from supposedly useless scraps of pop culture. In what could have turned out to be the hour of their death, McLoughlin and Jimeno find themselves humming the theme of a long-gone TV show.

The script was written by Andrea Berloff, adapted from the experiences of the McLoughlins and the Jimenos, and although it's sometimes believably casual, too often it hits with a clang -- particularly in the scenes in which a dutiful but nutso-looking accountant dons his old Marine uniform and heads to Ground Zero to help out. At one point this character, Dave Karnes (Michael Shannon), assesses the steaming ruins of the World Trade Center and intones, "Looks like God made a curtain with the smoke -- shield us from what we're not yet ready to see."

But Stone and his cinematographer, Seamus McGarvey, do know how to use light -- and its absence -- to tell a story. The movie opens with scenes of the city slowly awakening on a very sunny late summer morning, showing how even the city that never sleeps has to stretch and yawn a little bit in preparation for the day ahead. The scenes in which the men lie trapped, talking to each other, occasionally screaming in pain and frustration, are the betrayed promise of that morning. The air in these scenes feels dense and convincingly claustrophobic; in the dim light of their treacherous prison, the men's dust-covered faces are chalky yet urgently distinct -- they're like gray-green ghosts trapped between this life and the next.

And when the action shifts aboveground, Stone and McGarvey show us how the outside world is no refuge from pain and uncertainty. Bello and Gyllenhaal are both terrific: As Allison Jimeno, Gyllenhaal transmits a fluttery nervousness that nonetheless has reserves of strength and resiliency at its core; Bello's Donna McLoughlin is the suburban mom who's usually pretty capable of holding everything together (she and her husband have four kids), but whose world threatens to crack when she realizes she might lose her husband. Bello's eyes have a softness that's inherently a little sad, as if the possibility of loss and sorrow were never very far away -- as if it were no surprise that she should so suddenly be put to the test, even as she can't quite reckon with the unfairness of it.

There's another actress in "World Trade Center" who doesn't get star billing, but who practically explodes the picture from within. In a very small part -- a scene with Bello -- Viola Davis plays a woman whose son works in the towers and who she fears is dead. She and Donna meet in the cafeteria of Bellevue Hospital, where the waiting families of some of the victims have been herded. The woman explains that her last encounter with her son had been a quarrel; he'd had to work late and had missed the dinner she'd cooked.

Davis has only a few lines, but her face is a map of grief; she's a country of one even in a world in which everyone, at one time or another, must feel pain.

"World Trade Center" is perhaps only a marginally effective movie about 9/11, because, I suspect, there can be no such thing as an effective movie about 9/11 -- at least not right now. Dealing with the event directly is impossible; it's like staring at the sun. The only way we can truly get at it is to come at it sideways, as Spike Lee did in his ruggedly heartfelt "25th Hour," or as Kate Bosworth's Lois Lane does in "Superman Returns" when she asks the Man of Steel, "Where were you?" -- and nothing more, because what more does she need to say? Similarly, Davis is, strictly speaking, on the fringe of "World Trade Center." But she tells the whole story, and in less than five minutes. We're only just beginning to figure out how to translate the events of 9/11 into art. Viola Davis' face tells us that, right now, at least, we can't.