Bush supporters are already attempting to squeeze political gain out of the airplane plot in the U.K. 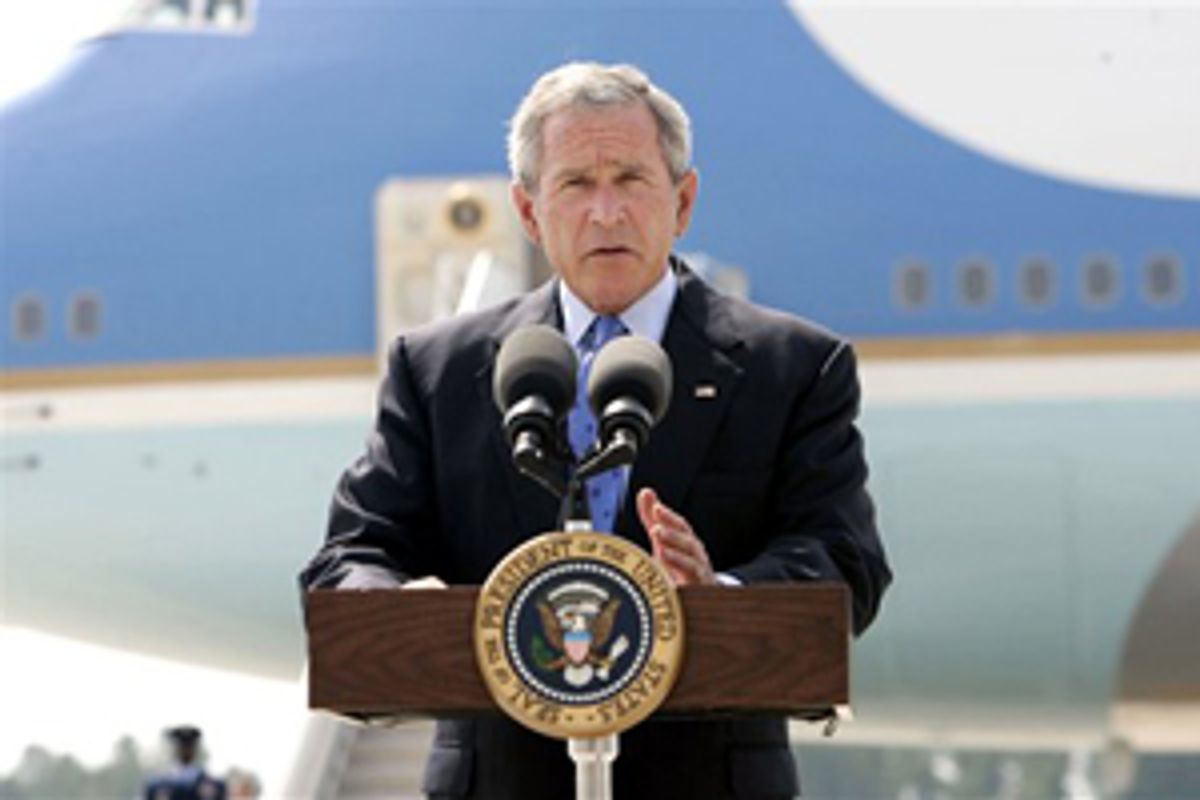 Roughly 12 hours have elapsed since it was disclosed that the British police thwarted an attempt to blow up transcontinental airplanes. Few facts are known about how the plot was uncovered and exactly who was behind it. Nonetheless, supporters of President Bush have wasted no time attempting to exploit this event to make what they evidently perceive are powerful political points in defense of the president and his most controversial policies.

Glenn "Instapundit" Reynolds excitedly points to this terrorist plot and then claims that "some people" -- he does not, of course, say who these "some people" are -- "have decided that the war on terror is passe. But although you may not be interested in terrorism, terrorism is still interested in you." Michael Ledeen in National Review attempts to use this incident to argue that we should confront Iran: "But here was a secret plot we found out about, and we acted. Iran announces its intentions openly, however we don't act."

Also in National Review's Corner, Cliff May quickly seized this plot as a weapon to attack seemingly every political opponent he could think of, from the ACLU and the New York Times to Howard Dean and Ned Lamont. And one popular right-wing blogger who writes anonymously behind the name "Ace of Spades," actually insisted that this event all at once demonstrates the wisdom of warrantless eavesdropping by the National Security Agency, the Patriot Act, Guantánamo military tribunals and torture (only to then casually recant all of that once it was pointed out to him that it was British law enforcement agents, not Americans, who foiled the plot).

The White House is sure to follow suit any minute now, insinuating -- or explicitly claiming -- that this incident proves that Bush was right about the whole array of our country's foreign policy disputes, from Iraq to the current Israel-Lebanon war. This naked exploitation of terrorist threats for political gain occurs every time a new terrorist plot is revealed, no matter how serious or frivolous, no matter how advanced or preliminary, the plot might be. Each time a new plot is disclosed, administration officials and their followers immediately begin squeezing the emotions and fears generated by such events for every last drop of political gain they can manufacture.

But this effort is as incoherent as it is manipulative. Nobody doubts that there are Muslim extremists who would like to commit acts of violence against the U.S. and the West. No political disputes are premised on a conflict over whether terrorism exists or whether it ought to be taken seriously. As a result, events such as this that reveal what everyone already knows -- that there is such a thing as Islamic extremists who want to commit terrorist acts against the U.S. -- do nothing to inform or resolve political debates over the Bush administration's militaristic foreign policy or its radical lawlessness at home.

Invading and bombing Muslim countries do not prevent terrorism or diminish the likelihood that British-born Muslims will blow up American airplanes. If anything, warmongering in the Middle East exacerbates that risk by radicalizing more and more Muslims and increasing anti-U.S. resentment. And the more military and intelligence resources we are forced to pour into waging wars against countries that have not attacked us, the less able we are to track and combat al-Qaida and the other terrorist groups that actually seek to harm us. There are few things that have more enabled terrorism than turning Iraq into a chaotic caldron of anarchy and violence -- exactly the environment in which al-Qaida thrives.

Nor is opposition to the president's lawbreaking somehow undermined when it is "revealed" that there are terrorists in the world who are trying to attack the U.S. Opposition to warrantless eavesdropping, for instance, is predicated on the fact that a constitutional republic that exists under the rule of law cannot tolerate a president who defies the law at will, and is further based on the indisputable fact that the president is fully able to eavesdrop on terrorists in compliance with the law, i.e., by obtaining warrants. Screeching about terrorist threats as though it justifies such illegal conduct is a complete non sequitur. Nobody opposes surveillance of terrorists.

But Bush followers who exploit terrorist threats for political gain and to gin up support for the president's policies are not pursuing rational arguments. They leap at the chance to manipulate terrorist stories because they want to ratchet up the fear levels, precisely because fear obviates rational analysis and increases the willingness of citizens to cede more power and control to the government, to place more blind faith in political officials in exchange for a feeling of protection.

James Madison, in a 1798 letter to Thomas Jefferson, warned about this manipulative tactic: "Perhaps it is a universal truth that the loss of liberty at home is to be charged to provisions against danger, real or pretended, from abroad." And Alexander Hamilton, in Federalist Paper No. 8, observed: "Safety from external danger is the most powerful director of national conduct. Even the ardent love of liberty will, after a time, give way to its dictates."

Over the next several days, at least, we will repeatedly hear Bush and his supporters attempting -- implicitly and overtly -- to transform this terrorist plot to into political support for Bush policies. That is a game they have been playing for several years now, and it is what accounts, more than anything else, for their victory in two consecutive national elections. But it is an intellectually dishonest and corrupt ploy, and the collapse of Bush's popularity strongly suggests that Americans have become increasingly immune to being told that they should support the president's extremist policies and overlook his profound failures, all because there are terrorists in the world who want to commit violent acts.