Honey, I read "The Stranger"!

The president read Camus' "The Stranger" on vacation in Texas, and now you can read the book report he wrote for Laura! 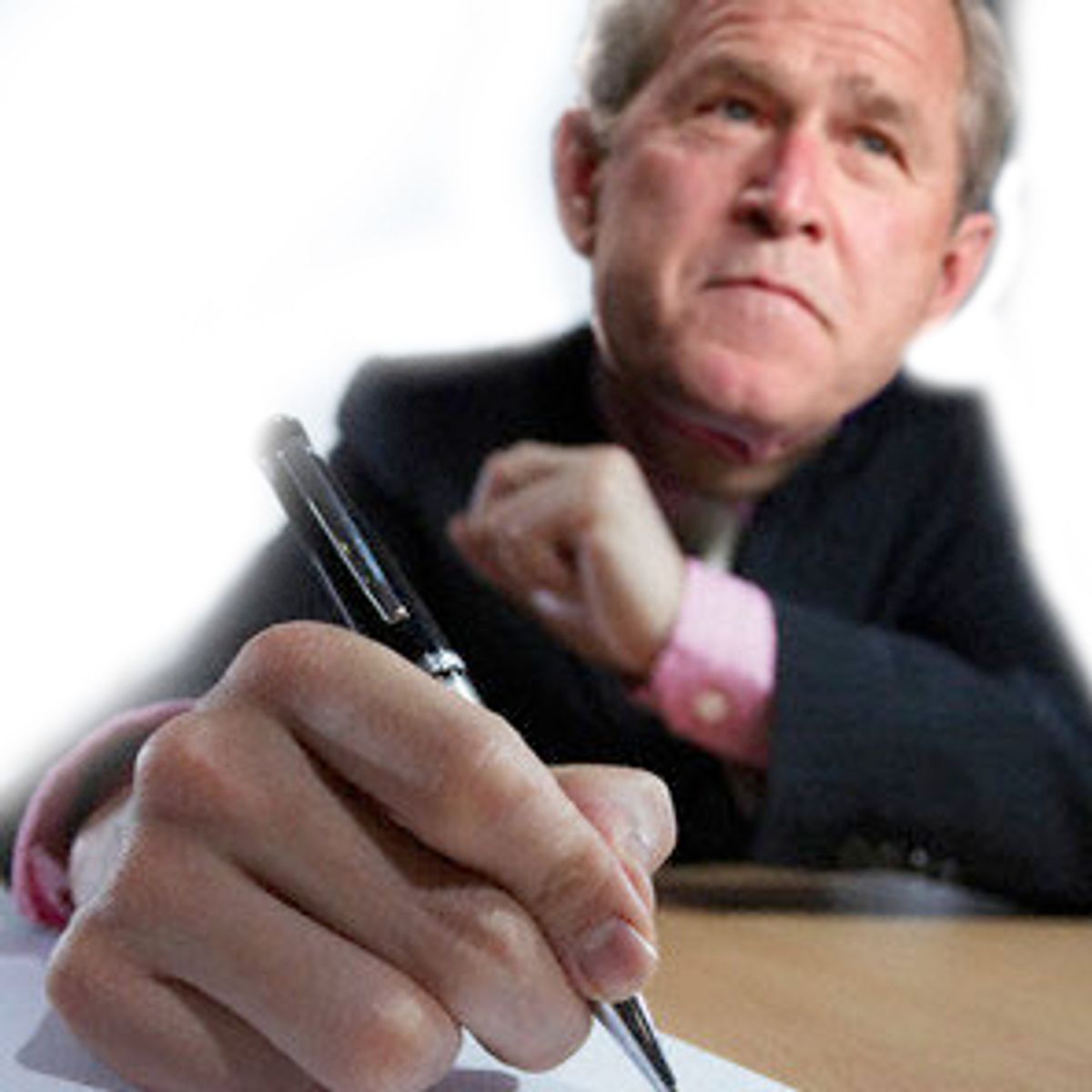 U.S. President George W. Bush quoted French existential writer Albert Camus to European leaders a year and a half ago, and now he's read one of the writer's most famous works, "The Stranger."

White House spokesman Tony Snow said Friday that Bush, on his Texas compound enjoying a 10-day vacation from Washington, had made quick work of the Algerian-born writer's 1946 novel -- in English.

You said no way I could read a book in 10 days. And when I said I was going to read the frog book, you said, Well, George, I hope those big words don't hurt your esophagus too much going down. The joke's on you, woman. I finished the dang thing. And just so you believe me, I'm going to write it all down in a little book report deal, and that way, you'll know I read every darn word. And Condi's going to check my spelling just in case you go all schoolteacher on my butt.

So first of all, lemme tell you, Laura, if all frogs were like Albert Ca-Moose-and-Squirrel, the author, we wouldn't have quarrel with that nation or any other, and I could eat french toast again, not to mention french dressing, which beats ranch all to heck. Now Condi said be sure to remember that Ca-Moose-and-Squirrel was living back in the days of World War II. The big one. Which is when frenchmen used to have a pair. Dad said he flew missions with some frenchies. Over the ocean. Flew with them over the ocean. On missions. Said they knew a thing about mademoiselles, which I'm guessing Ca-Moose-and-Squirrel did, too.

The whole book starts with someone going up to Jesus, and you will never guess who, not in a million. The mama! Who is called by the name of Mammon. I told Condi she was kidding but no. Mammon dies right off, and this guy doesn't even know which day it happened on, which is crazy. If my mom died, you can bet Dad'd be all over me about the thank-you notes, and you mean to say he'd let me get away with "Oh, Mom died today, or maybe it was yesterday, beats me"? Nuh-uh. It'd be "Mom died at 3:31 p.m. Tuesday morning, surrounded by loved ones, and thanks for the fruit basket." And "P.S. Jenna specially liked the tarts."

Mammon's boy is named Meursault, which, when you close your eyes and say it soft, sounds kinda like a car. And he's got this frat brother who's some kind of pimp, I guess, and that guy's name is "Raymond," which is French for Raymond. Oh, and there's this Arab guy who's getting a little antsy with the knife. (Like we haven't seen that before.) So Meursault goes and finds Ahab, and the sun's really bugging him now, which I could see, even though I'm guessing Algeria doesn't get any hotter than Crawford. The frog plugs Ahab, causing him to pre-decease. This is wrong for him to do as there's no red alert or even yellow, and also Muslims is peace loving mostly, and as this is 1940s, there's no Osama or Saddam, unless they're babies. Plus even when Ahab's down, Meursault plugs him four more times, which I don't think they'd even try in Guantánamo. (Better not!)

Well, suiciders has got nothing on Meursault, 'cause being the perpetuator of the act, he goes to jail, and it's like he just gives up. Like Al Gore but faster is what it's like. Or like, remember when I almost gave up on that largemouth bass, and I didn't, and it turned out to be seven and a half by God pounds? So Meursault goes to trial -- I don't think they detain him more than a few weeks -- and at this trial, someone comes out and says, Know what? He didn't cry when Mammon bought it. And I'm like, 'scuse me? Did you ever see Dick Cheney getting womany 'cause Ol' Harry Whittington pretended to be a quail? You think he got where he is, heartbeat away, by being remorsed? 'Scuse me.

Despite not living in Texas, Meursault goes and gets the death penalty, even though he has never once disassembled. This is where I thought it was not realistic. But it picks up towards the end when a minister comes to see Meursault, which my thoughts are this must have been what faith-based initiatives looked like in the old days. It doesn't go well, owing to Meursault has not taken Jesus into his soul, and he's saying this stuff like "Nothing, nothing mattered," and he's shaking that little frenchy priest, and I want to say, Easy, boy. See, even if you went and plugged yourself an Arab, there's universal values, and these values, they're not American values, or you know, European values, they're universal values. And those values being universal ought to be applied universally. Is what I think.

I really liked the last line, Laura. Meursault says, "I had only to wish that there be a large crowd of spectators the day of my execution and that they greet me all with hate." Which reminds me a little of one of Rummy's press conferences. And also Iraq, where, though we are welcomed, it is not a peaceful welcome. There's opinions that don't agree with mine, and that's OK, right, Meursault?

Anyways, I'm glad I read it because next time Monsieur Prime Minister of Frogland Whoever says, What you reading? I can say, Hey, how about that "Stranger" book, huh? Isn't that a piece of work? We shouldn't fear a world that is more interacted, even if it's by books.

And maybe next time, Mrs. First Lady of Smartsville, you'll believe me when I say I think I'll read me a good book tonight. 'Cause "The Stranger" was cool, and even though it was in French, it read just like English. I mean, every word was in English, which makes me wonder why folks even bother learning other languages. Meantime, I can't wait to meet the author, so I can tell him how much his book rocked. Except maybe he'll want to kiss me on the cheek or something, which would make Joe Lieberman all jealous. Never mind, I'll send a note. "Heck of a job, Ca-Moose-and-Squirrel!" You'll check the spelling, won't you? If Condi's not around?