The past of this eternally youthful "city of the world" is captured in the work of journalist Joseph Roth, author John le Carr 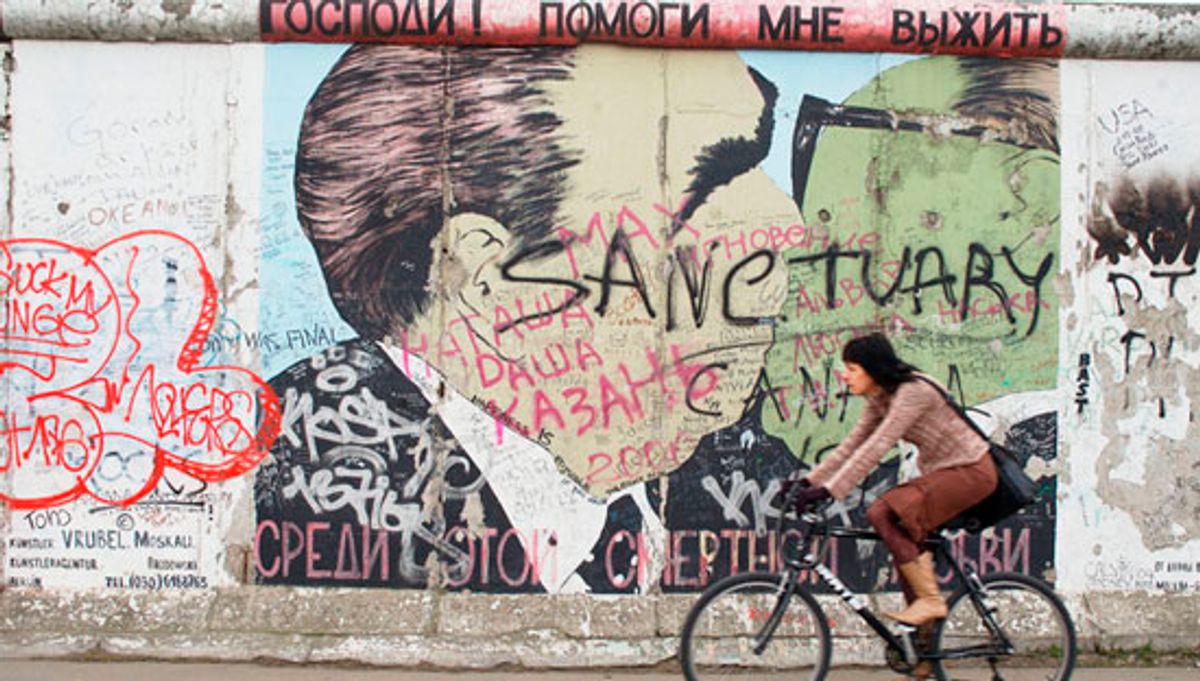 Feb 15, 2006; Berlin, GERMANY; (File Photo. Date Unknown) What's left of the Berlin Wall is one of the attractions of Germany's largest city, which is also the political and cultural centre of the country. Berlin is one of the cities where the 2006 World Cup of Soccer will take place. Mandatory Credit: Photo by Peter Bennett/eyevine /ZUMA Press. (Â¬Â©) Copyright 2006 by eyevine (Peter Bennett/eyevine)
--

Berlin was the capital of the 20th century, home to some of its biggest thrills and most terrible crimes. Now, in 2006, it is closer than ever before to its glory days a hundred years past, once more a roaring center of change. Bismarck, Weimar, Hitler, Vopos, Stasis, David Hasselhoff: Berlin has been conquered, bombed, broken, divided, reunited and survived it all.

And it's done more than survive -- it's practically incandescent. During the Cold War, West Berlin was a hot spot for the fabulous (think David Bowie and Iggy Pop recording "Lust for Life" in Schöneberg), and unified Berlin has become an international destination for contemporary art, a mecca for musicians and actors and exhibitionists of all stripes. The city is absolutely crawling with expats, too -- not to mention the pretty things who keep amphetamine-fueled parties of heavy techno going well into the next afternoon.

Berlin is truly a Weltstadt, a city of the world, as "German" as New York is "American." And like New York, it has been distrusted by the country that lies outside its limits. As David Clay Large points out in his engrossing history "Berlin" (1995), "much of Europe watched in trepidation as the Germans marked the establishment of their new nation with a pompous ceremony at Versailles in 1871, and many Europeans shuddered anew when the two Germanys were reunited in 1990." Yet shuddering hasn't done much to slow Berlin down. A hundred years ago, no other German city "embraced the new world more readily than Berlin, or, as a consequence, became such a magnet for the young." Today, Berlin is again the embodiment of modernity, of change, of restless youth and invention and tragedy.

Indeed, Berlin has had more makeovers than Madonna and suffered under just as many myths of nostalgia. When I was there in 2003, Berliners repeatedly lamented that I had arrived too late: "If only you had been here five years ago," they told me again and again. This, it turns out, is a very Berlin thing to say. As far back as the 1930s, Frankfurt School critic and philosopher Walter Benjamin was turning over stones and turning back the clock to his childhood to excavate the past from the places around him -- the Tiergarten, the Market Hall, the intersection of two streets. His recently republished "Berlin Childhood Around 1900" is a great companion to days lost to wandering about the city, imagining what the galleries and clubs were five years ago, or 50, or 100.

A collection of Joseph Roth's newspaper columns -- published a few years back as "What I Saw: Reports From Berlin, 1920-1933" -- is also a fine guide to Berlin past. Born in Galicia, in the far east of the Habsburg empire, Roth was a journalist and novelist who fought for monarchy in World War I and traveled throughout Europe after his beloved empire fell. A brilliant storyteller with a special talent for the feuilleton -- part essay, part observation, part cultural critique -- he was among the best-paid newspapermen of his time, earning a whole one mark per line. Roth lived in Berlin until Hitler took power, at which point he fled the country.

In essays like "An Apolitical Observer Goes to the Reichstag," "Skyscrapers," "The Berlin Pleasure Industry" and "Nights in Dives," his wry humor and eye for detail bring Weimar Berlin to life, and any traveler will see that his observations are as fresh today as ever. "If the very large department store looked to begin with like a work of hubris," he writes in "The Very Large Department Store," "it comes to seem merely an enormous container for human smallness and modesty: an enormous confession of earthly cheapness."

Alfred Döblin's neglected 1929 masterpiece "Berlin Alexanderplatz" -- the greatest book about the city -- delves deeper into the daily life of 1920s Berlin. The novel opens as Franz Biberkopf, who has served four years for killing his girlfriend, is released from prison in Tegel. "The punishment begins," Döblin intones, when Biberkopf, back on the streets, must try to play it straight. Wandering the ground between Alexanderplatz and Rosenthaler Platz, now home to trendy cafes, galleries and shops, Biberkopf is pummeled by the city, suffering poverty, loneliness and betrayal from friends while flirting with Nazism and communism.

Döblin brought a unique perspective to writing about Berlin. As a psychiatrist who worked in mental hospitals with laborers and workers, he was able to use his knowledge, as well as a healthy dose of mystical figures and symbols, to create a vivid portrait of madness -- and the mad city that drives its inhabitants to desperation. Unlike Christopher Isherwood, whose autobiographical "Berlin Stories" (1963) call up images of bohemian glamour (and are also a treat to read), Döblin's Berlin is unromantic: It is a place of struggle, where the only victory is survival.

Of course, Berlin has inspired a host of espionage novels too, from Ian McEwan's "The Innocent" (1996) -- set in the divided city before the Berlin Wall -- to John le Carré's "The Spy Who Came in From the Cold" (1963), the gold standard in Berlin spy fare. Yet for an actual true-life account of wartime, turn to "A Woman in Berlin: Eight Weeks in the Captured City." Published last year to great acclaim, the book is an anonymous 34-year-old journalist's personal record of the fall of Hitler's regime and of the suffering Berliners endured under the Russians who came to "liberate" them. "A Woman in Berlin" is difficult, painful reading. But it offers a uniquely grim and honest portrait of Berlin life in the last days of its devastating Nazi rule.

The jewel of today's rebuilt Potsdamer Platz, which was destroyed by bombs in WWII and split by the wall in 1961, is the glass roof, cinema and offices of the glittering Sony Center. But outside its curved reflective walls, the city is decked out in graffiti, pockmarked with empty lots; some buildings are still marred by bullet holes. Berlin is fabulous, but wounded. The most obvious sign of the past is the construction that still dots the landscape. Underneath every giant crane is history that has been papered over, put under glass or willed out of existence. And while reflective walls are nice, the numbers don't lie: Unemployment hovers at nearly 20 percent and the city is struggling with $70 billion of debt. (Rent is cheap in Berlin for a reason.) Everywhere hums the tension of the past, the Mauer im Kopf -- the wall in the head -- that divides East and West and breeds Ostalgie, nostalgia for the East, when loyalty to the party was cruelly enforced but at least there was butter on the table.

To investigate this lost life of East Berlin, read Anna Funder's "Stasiland" (2003). An Australian working for German television in the late 1990s, Funder became obsessed with collecting East Germans' stories of life behind the wall. She interviews ex-Stasi men, informers and East Germans who suffered under the Stasi rule and the paranoia it bred. Funder goes beyond the lives of the famous to give regular East Germans -- a people who will no longer exist, who are already ceasing to exist -- a voice. Whether talking to an East Berliner whose sick son was raised in a hospital in the West or the agent who painted the line where the wall was raised, "Stasiland" grants Easterners the humanity that they have been long denied. Their stories are today's "Berlin Stories."

Books Germany The Literary Guide To The World Travel