The sunny scenario of Sunni Arab political integration gets dimmer as speaker al-Mashhadani takes a hard line against Shiites -- and the U.S. 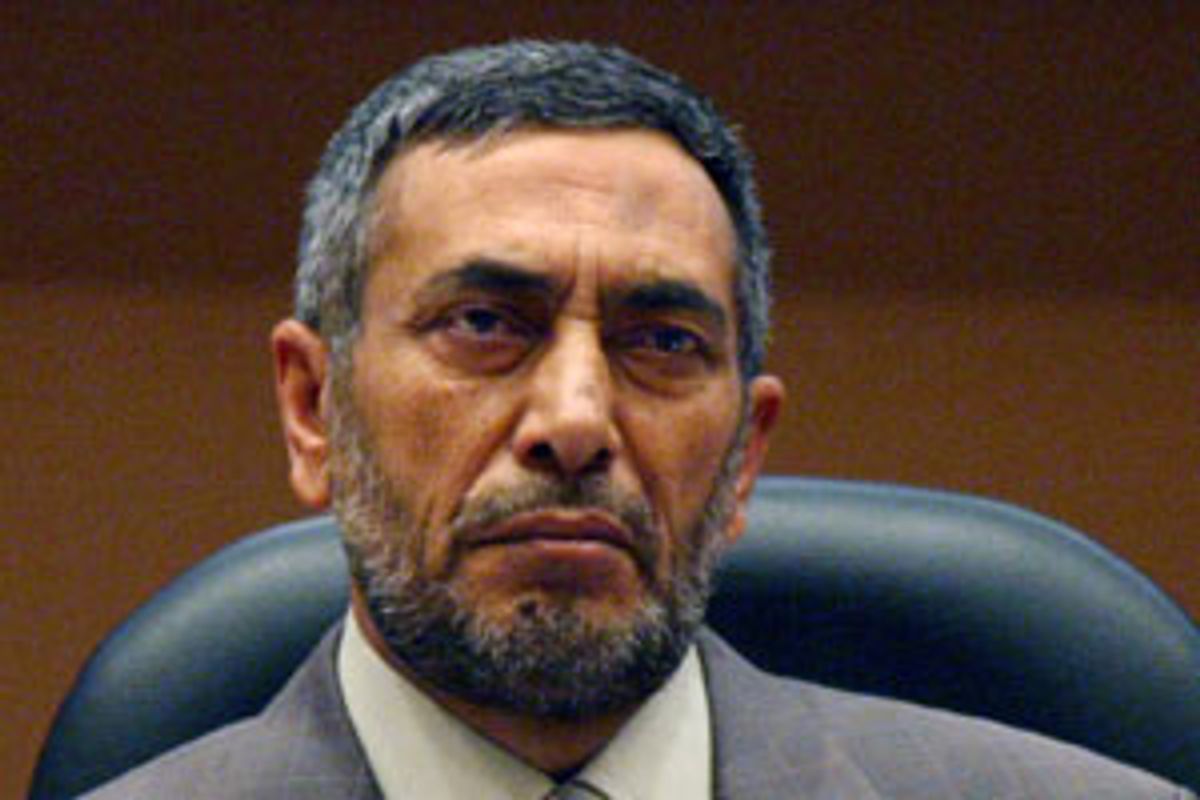 When George Bush met the speaker of the Iraqi parliament, he liked him. During his June trip to Baghdad, Bush sang the praises of Dr. Mahmoud al-Mashhadani, who had been elected speaker in late April. "I was impressed by him," said Bush during a press conference. "He's a fellow that had been put in prison by Saddam and, interestingly enough, put in prison by us. And he made a decision to participate in the government ... It was interesting to see a person that could have been really bitter talk about the skills he's going to need to bring people together to run the parliament."

But when the Iraqi parliament reconvenes next month, the first item on the agenda will be firing Mashhadani. He has put his foot in his mouth too many times. Considering what he's been saying about the United States since his moment with the president, the end of his tenure should come as a relief to the Bush administration. "Who destroyed Iraq? Who plundered Iraq?" exploded Mashhadani in a recent interview. "It is none other than the blue jinn whose name is the American Occupation." Mashhadani's imminent removal, however, is an ominous sign for the future of inclusive electoral politics in Iraq.

The White House narrative about the Iraqi parliamentary elections of last December depicted them as hopeful in their inclusiveness. For the first time, Bush administration spokesmen told us, the Sunni Arabs were forsaking the insurgency in order to join the political process. This willingness to work through the ballot box was supposed to signal the beginning of the end of the guerrilla war.

As Bush explained in a speech to the Wilson Center in Washington, "The enemy of freedom in Iraq is a combination of rejectionists and Saddamists and terrorists. The rejectionists are ordinary Iraqis, mostly Sunni Arabs ... We believe that, over time, most of this group will be persuaded to support the democratic Iraq led by a federal government that is strong enough to protect minority rights." The Bush administration policy was to crush the Saddamists and terrorists and find ways of dividing them from the less implacable "rejectionists."

Among the few advantages to Sunni Arabs of joining in the political process was their acquisition of a handful of high government posts. The office of speaker, or president, of the parliament was earmarked for a Sunni. Several candidates were found unacceptable by the other communities for having been too close in the past to the Baath Party or having been too openly sectarian in their views. After much wrangling, the parliament elected as its speaker, or "president," an outspoken Sunni, Mashhadani.

Mashhadani was born in a Shiite-majority neighborhood of Baghdad in 1948. In the 1970s, after medical school, he joined the military and became a major. But when Saddam invaded Iran in 1980, he opposed the war and barely escaped a death sentence, receiving 15 years in prison instead. He later joined the Salafi, a Sunni revivalist movement, and was reputedly a member of radical Sunni guerrilla groups such as Ansar al-Islam in the late 1990s and early 2000s. He frequented the Ibn Taymiyah Mosque, a center for hard-line Sunnism influenced by Saudi Arabia's strict Wahhabi school. The American military captured and briefly imprisoned him. On his release, he turned to civil politics and became a member of the Iraqi Accord Front, a coalition of Sunni religious parties that gained 44 seats in parliament in the December 2005 elections.

This apparent transformation from a radical allied with Ansar al-Islam, a group the Bush team had tried to link to al-Qaida, into a parliamentarian is what inspired Bush's sunny story of rehabilitation. "They tell me that he wouldn't have taken my phone call a year ago," Bush marveled, "and there I was, sitting next to the guy. And I think he enjoyed it as much as I did."

But was Mashhadani really happy with Iraq's political situation? He may have had other motives in taking the speaker's job. He has been attacking the United States, floating anti-Semitic conspiracy theories, and pushing back against the dominant Shiites ever since he assumed office.

Mashhadani has been particularly scathing about an incident in Mahmoudiya, in which American soldiers allegedly stalked, raped and killed an Iraqi girl. He told an Iranian satellite television station on July 7 that the Iraqi parliament must "confront foreign occupation." He said that such incidents were not isolated cases, and he insisted that only ending the foreign military presence in his country would stop them.

The following week, on al-Arabiyah satellite television, Mashhadani was asked about the sectarian violence in Iraq. He denied that the beheadings and kidnappings were being carried out by his countrymen. "These acts are not the work of Iraqis. I am sure that he who does this is a Jew and the son of a Jew."

"I can tell you," he continued, "about these Jewish, Israelis and Zionists who are using Iraqi money and oil to frustrate the Islamic movement in Iraq and come with the agents." The BBC noted that by "agents," Mashhadani "appeared to be referring to secular politicians who do not identify themselves with religious or ethnic communities."

In July 23, an Iranian newspaper, a pro-regime organ called Kayhan, ran an interview with Mashhadani. The interviewer began by asking him if the United States had had a plan, even before Sept. 11, to occupy Iraq for its petroleum. Mashhadani replied that the American invasion of Iraq had nothing to do with oil, but rather was a millennarian Zionist plot to destroy the country. He said that the Zionists believed that the temple of Solomon must be rebuilt, and Israel as a "great nation" must be reestablished, before "their God" would descend. "That nation will never be established," explained Mashhadani, "unless Babylonia and Assyria, which extend from Hilla to Nineveh, are annihilated."

Mashhadani, the hard-line Sunni, also criticized Washington for its negative view of Shiite Iran. He said, "We condemn all Western attacks against the Islamic Republic of Iran with regard to its nuclear [program], and we know that this is just an excuse when they say Iran is trying to make a nuclear bomb. The Western countries themselves have so many bombs that they do not know where to keep them." He added that Iran was a target for the West because it is a Muslim country. "Otherwise, why don't they attack India? ... India even has war plans. But Iran, whose nuclear program is for peaceful purposes, is attacked."

On July 30, during Mashhadani's trip to Egypt, an interview with him ran in the Cairo-based pan-Arab daily al-Sharq al-Awsat (The Middle East). In it, Mashhadani claimed that the United States wasn't equipping the Iraqi army properly for fear that some units might turn on American troops. The result, he complained, was that the Iraqi military couldn't match the weapons or training of the sectarian and ethnic militias. "This has caused a large security problem," he lamented, "to the point that the armed groups or even one armed group can defeat a brigade from the Iraqi army." He revealed that the Iraqi government was privately talking to some 30 armed guerrilla groups, and that the Iraqi parliament was also seeking forms of dialogue. He did not think it impossible to arrive at an acceptable compromise with some of the groups.

In his Cairo interview, Mashhadani said that it would be relatively easy to pass a resolution in parliament calling for a withdrawal of U.S. troops, maintaining that there was a consensus on this matter within the Iraqi legislature. Everyone, he said, "want[s] to put an end to the U.S. occupation." He said he thought a committee should be established to pursue the issue, but cautioned, "The committee should also study the negative and positive issues so that the U.S. withdrawal from Iraq would not lead to anarchy."

Then, earlier this month, during a visit to Damascus, Mashhadani made his "blue jinn" comment and blamed the United States for the collapse of Iraqi security. "The occupation is the first and last cause of the problem. It has overthrown the [former] regime without a plan, it has suppressed the state with no reason, it has led to the resistance and it has infiltrated it, it has brought al-Qaida to Iraq." He charged that U.S. troops were behind some of the terrorist attacks in Iraq and described today's Iraq as "Americastan."

The brevity of Mashhadani's run as speaker would seem, on its face, to have something to do with all this anti-American invective. Perhaps Bush and U.S. House Speaker Denny Hastert -- who met and bonded with his Iraqi counterpart during that same June trip -- had some second thoughts about their praise of Mashhadani. No doubt the mammoth U.S. embassy in Baghdad has been working behind the scenes to remove this embarrassment from his influential post in government.

American pique, however, will not be the deciding factor in Mashhadani's ouster. If the parliament boots him on Sept. 1, it will be because of his conflicts with Shiite cleric and politician Abdul Aziz al-Hakim, the leader of the largest bloc in parliament. Al-Hakim envies the regional confederacy that the Kurds have established in the north and wants the Shiites of south Iraq to meld their provinces into a super-province that would dominate Iraq. Mashhadani opposes this plan. He fears that the Shiites will monopolize Iraq's petroleum and minerals, most of which lie in the south. Sunni Arabs do not have much in the way of resources, and so cannot simply form their own region in response.

The promise of Bush's scenario, in which Sunni Arabs join the political system and play a positive role in parliament, has not worked out as he envisaged. The Sunni Arab guerrilla movement goes on blowing things up. The Sunni speaker of the house turns out to have an Mel Gibson-esque obsession with Jewish plots. Instead of a dialogue over Sunni Arab aspirations for a united, centralized Iraq, and Shiite desires to devolve power on provincial confederacies, we are seeing hardball played in the Iraqi parliament. There will be no such dialogue. The inability of the Iraqi parliament to tolerate Mashhadani bodes ill for the prospects of reconciliation among Kurds, Shiites and Sunni Arabs. The speaker's job, after all, is reserved for a Sunni -- and all the Sunni parliamentarians agree with Mashhadani in rejecting the Shiite super-province plan. If Mashhadani goes, his successor will probably be a lot like him.