Jesus Rivas talks about wrestling the biggest serpents on earth and how he came to travel with two pillowcases full of snakes on a plane. 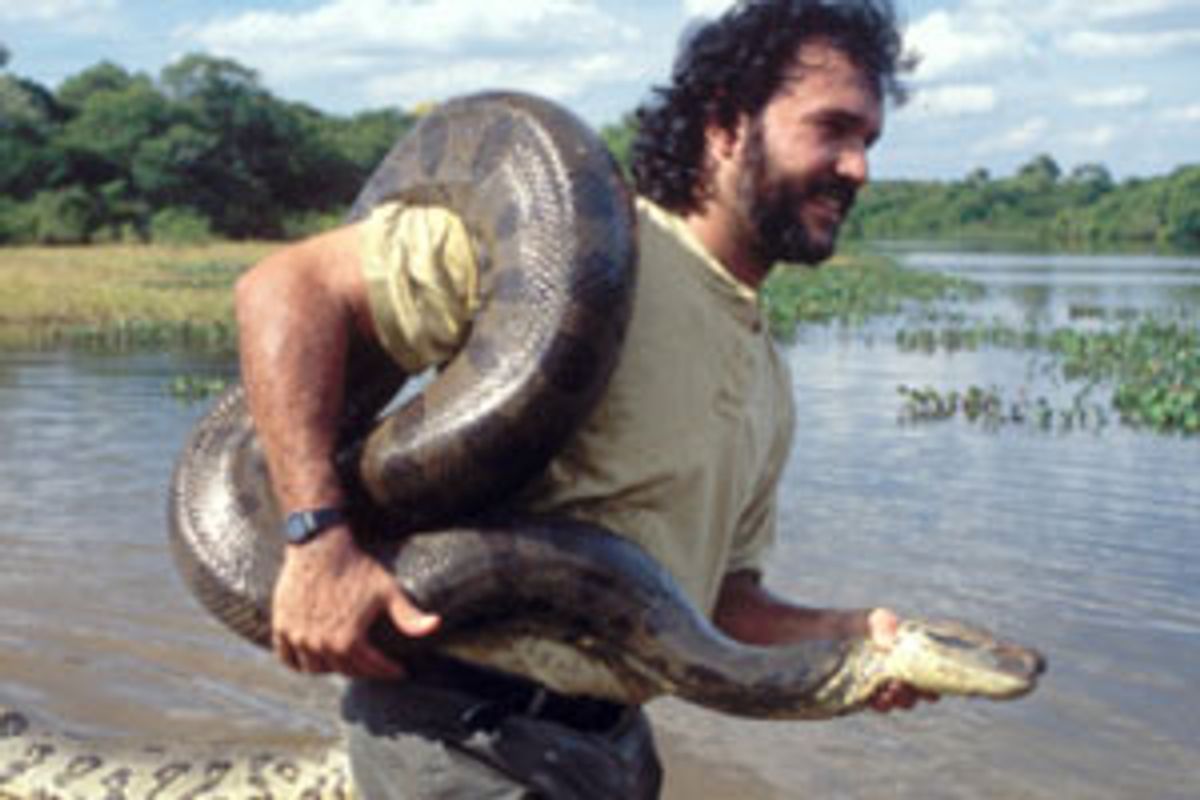 Jesus Rivas loves the green anaconda. The object of his affection is the biggest snake on earth, which regularly dines on 7-foot caimans (Spanish alligators). Rivas loves them so much that he walks barefoot through the swamps of Venezuela, his native country, until his toes touch one of the serpents lounging in the mud, at which point he wrestles them into submission. Perhaps for obvious reasons, field studies of the anaconda were virtually nonexistent before Rivas began pursuing his herpetological passion in the late '80s. Since then, he has captured more than 900 anacondas in the wild and carefully studied their life cycle -- including the previously undocumented "breeding aggregations," the balls of small male snakes that struggle to impregnate a giant female. Rivas has made several TV documentaries about his charismatic study animal, including "The Land of the Anacondas" with National Geographic. He's now an assistant professor at Somerset Community College in Kentucky.

Salon spoke to Rivas by phone about how it feels to snuggle with an anaconda, what to do when a large female tries to wrap you in an "evil loop," and the challenges of actually taking snakes on a plane.

What does it feel like to be close to anacondas. Are they cuddly?

They're not cuddly. [Laughs.] But they're not slimy, either. They're very muscular. When you grab them, you feel you're grabbing something hugely muscular underneath. The skin is smooth. It's nice to the touch. When you squeeze it, you know you're touching an extremely strong animal. You feel the layers of muscle under your hand. She normally grabs you back and holds you around your arm or leg. When I catch them in the wild they are upset, of course, and we have to wrestle.

You have to wrestle?

Yes, she grabs at you and you wrestle her back -- normally with several people. After about 15 minutes, I will be panting and tired, but the snake will be just as tired because her metabolism is slower and she doesn't recover as quickly. So after 15 minutes of struggle, the snake will just give up.

So is the snake trying to wrap herself around you and squish you in the "evil loop" the anaconda is famous for?

[Laughs.] I don't let her do that, but that's what she tries to do. It's about knowing how the animal is going to turn to avoid being caught by the loop.

You mean you've never been strangled or bitten?

Normally I'm the one going after the snake. If the snake came after me, it would be a different story. Normally when they attack prey, they grab with the mouth and then wrap it in a loop. The really dangerous, powerful thing about the anaconda isn't the bite but the squeeze. I have been bitten a few times, but they don't bite to hurt. They bite to hold.

How do you find these large snakes in the swamps of Venezuela?

I know the kind of places where they live -- usually in shallow waters with a lot of vegetation. I go shuffling through the water, feeling with my feet for them and poking with poles in the mud. Normally I find them by stepping on them.

You're kidding. You step on it and then you reach into the water to grab it?

Yes, that's when the fun begins. You know, when you step on something it could be anything. Could be a turtle, in which case there's nothing to do -- you're going to feel the shell. You feel something hard, but you need to reach with your hand to really define what it is. Sometimes you can reach and feel something hard but scaly, in which case it could be a caiman, which is a smaller cousin of the alligator. When I say smaller, it's 7 to 20 feet and with a very big mouth.

Why don't you wear boots?

But being barefoot I can feel thoroughly and detect what it might be and pull out my foot sooner, which is better than putting on a clumsy boot and eventually getting hurt.

Also, I stopped wearing boots because of fungus. I developed a nasty fungal infection all the way up my ankles. It was horrendous. Without boots, my feet would dry more quickly and the fungus went away.

Can a mature anaconda actually eat a caiman?

Absolutely, yes. I have photos of that.

Could a mature anaconda eat somebody the size of Samuel Jackson?

How big is he?

Absolutely. Snakes are known to eat things that size or even bigger. There are records of snakes eating prey that weigh 160 percent of their body weight. So a 200-pound anaconda could eat something that weighs 300 pounds -- no problem.

That's been reported, but the biggest one I've ever captured was 18 feet and about 220 pounds. I've noticed something I call the coefficient of amazement -- the more amazement, the bigger the snake! Where I work in the Venezuelan Llanos there's a long dry season. It could be that anacondas live longer in the Amazon, where it's wetter, and therefore get bigger. But I don't believe anything that I haven't measured myself.

You travel the world studying anacondas. Have you ever traveled with snakes on a plane?

You know, I always try to avoid traveling with animals. But once I was doing a study in husbandry to see how well anacondas would do in captivity. The problem is, it's hard to get babies in the wild because they have a very low survival rate. I had caught a few but there was a zoo in Barquisimeto, a small city west of Caracas, which had a big female who had given birth to a lot of babies -- 29 baby anacondas. It was perfect. They agreed to give me the babies for my research, so I flew from Caracas to go pick them up. After spending a day there, I went to the airport with the babies in a pillowcase to take them back home.

The best cage, as any snake biologist knows, is a pillow case -- there's nothing else. If you're a snake biologist, you won't find any better device or cage.

You had 29 anacondas in a pillowcase?

Actually I had them in two. They weighed a little under a pound each and were about one-half to 3 feet long but they cram together really good. They were fine -- they travel well. It was just a short half-hour flight back to Caracas.

Well, I had permits, but I still had trouble. This was a small-town airport and they didn't have much security, no X-ray machines or anything -- everything was hand-checked. So when it was my turn I decided I better tell the security guy that I have some snakes here because I didn't want him to just open my bag of baby anacondas. He jumped and said, "You can't travel with snakes on this plane, man! If those snakes get loose at 30,000 feet there could be a panic in the cabin. We can't risk that."

I told him not to worry. "They're not venomous. And they're nicely contained in a brand-new pillow case. There's no reason they're going to escape. If you want, I could double-bag them."

Did you have extra pillowcases with you?

He wanted me to put them in a proper cage but I explained that there isn't such a thing. You put snakes in a cage, they'll slither right out of it. You can use a cage with a screen but what the snakes do is rub their noses against it and they wound themselves. So the best is a pillowcase.

The guy wouldn't listen to reason. Next he tried to get the National Guard to confiscate the snakes because they're wild animals. But I worked for Fish and Wildlife at the time and had all the paperwork.

Finally, the security guy said that he had to ask permission from the pilot. I'm standing out on the tarmac with my baby anacondas and everyone is walking past me to board the plane and overhearing the discussion. I thought I'd never get on but very soon the pilot comes out and waves me in.

But what were the snakes doing? Were they wiggling around?

No, the snakes are very calm animals. They do great in bags. They try and move and realize there's no escape so they just chill out and cool down. With the air conditioning they tend to be colder than they like so they don't squirm or move around. I hoped people would think I was carrying bags of cheese or something like that.

What happened when you got on the plane?

But by the time I boarded the rumor had spread. I had to go to the last seat and as I walked down the aisle everyone knew I was carrying snakes. Since the movie "Anaconda," everyone is absolutely terrified of these animals, but the person who had the most extreme phobia was the security guy.

When you sat down, where did you put the two bags of snakes?

One in the overhead compartment and one underneath my seat.

How did they act at high altitudes?

I don't know for sure, but the snakes under my legs didn't move much. I don't think they noticed. They were probably too cold for their liking.

What if those snakes had escaped?

I don't think anything would have happened because the overhead compartment was locked.

But you did have some under your seat.

Well, yes. The first thing that could have happened is some of the passengers would have stepped on them. But they wouldn't have attacked anybody. They were too cold. Anacondas like it from 85 to 90 degrees and above. The plane is set to 70 or 72 degrees. That's a temperature at which they live fine but are not very active. Snakes depend on temperature in order to be happy.

So were the passengers happy?

I don't know, but at the end of the flight the pilot wanted to see them. So I opened the bag and he said, "Oh, cool." We were already back on the ground in Caracas.

Once I took some mature female anacondas to the gynecologist.

To the gynecologist -- the OB-GYN. I didn't have enough financing to afford the expensive field equipment I needed so I found a doctor who was willing to let me use his equipment to do an ultrasound. I offered to bring the snakes in on the weekend -- they were several adult females between 9 and 17 feet long -- but he told me to come in at 7 a.m. before his patients arrived. I got there with my snakes in a metal drum, got one out, wrestled it and put it on the table. The doctor was very excited because he could see the small baby snakes coiled up inside the mother, just like human babies.

Unfortunately, his patients started arriving before we were through. Four or five women saw me with the large anacondas and turned absolutely white.

Are there any other scientists in the world who go barefoot in the swamps looking for large snakes?

No. None that I know of.