Lieberman's racially inflammatory strategy may backfire when people remember his history of pandering to Louis Farrakhan. 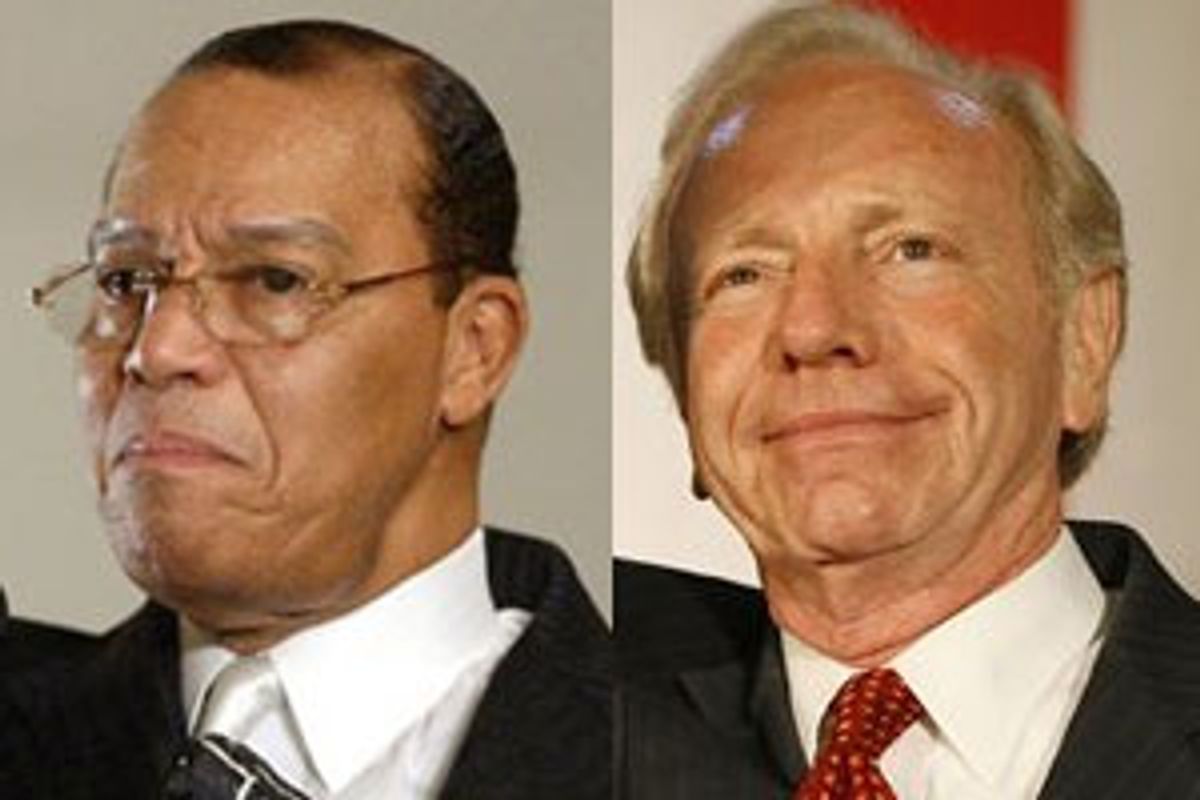 Ever since Joe Lieberman lost the Connecticut Democratic primary, he has been telling voters that he stands for "a new politics of unity and purpose." Yet he and his supporters have simultaneously pursued an old politics of division and distraction by drawing attention to the two controversial personalities who stood behind challenger Ned Lamont on primary night.

The Lieberman campaign is trying to frighten white voters in Connecticut -- and Democrats in Washington -- by reminding them over and over again that Al Sharpton and Jesse Jackson support Lamont. This week, the senator's aides told the New York Times that playing the two African-American preachers off against Lamont will enhance Lieberman's appeal on an independent ballot line. "Primary night was the first time that many Connecticut voters saw Lamont on TV, and he's surrounding himself with two of the more divisive and problematic figures in the Democratic Party," said Dan Gerstein, the Lieberman campaign's communications director.

It's true that Jackson and Sharpton, who bustled onto the podium the evening of the primary to grab their share of the Lamont spotlight, tend to be polarizing figures. But what if Lamont had praised an even more polarizing black leader? What would Lieberman say if his rival had reached out to someone really outrageous, like Louis Farrakhan?

If he were honest, he'd exclaim "Great idea!" -- because that's exactly what he said six years ago.

Lieberman can hope to get away with his racially inflammatory strategy only if everyone else forgets not only his habit of sucking up to Jackson and Sharpton but his history of stroking the most bigoted black leader in the world. Evidently he and Gerstein (who was also his spokesman during the 2000 presidential campaign) expect that nobody will mention the embarrassing episode when Lieberman's ambition (and opportunism) led him to praise Farrakhan. Given the laziness and amnesia that afflict the national press corps, they may be right.

After all, the truth about Lieberman's past flattery of Farrakhan (and Sharpton and Jackson) flatly contradicts the mainstream definition of him as a principled statesman. For someone who insistently presents himself as a moral absolutist, the "conscience of the Senate" is in fact a ruthless practitioner of situational ethics. Not so long ago, he liked to talk about his warm conversation with Jackson on the day that he became a major party's first Jewish vice presidential nominee, his eyes moist and his voice emotional as he recalled Jackson saying "something that went to my heart" about breaking down barriers for everyone. Not so long ago, he called Sharpton his "dear friend" and "brother" during the Democratic presidential primary debate sponsored by the Congressional Black Caucus and Fox News.

But that was then, and this is now -- and Lieberman is nothing if not a creature of the moment. When someone like Sharpton, Jackson or even Farrakhan can be used to his advantage, he eagerly sidles up and pours on the unction. And when Sharpton and Jackson turn up on the other side, he demonizes them with equal sincerity, which is to say none. Divider or uniter, friend or foe, principle or pander: It all depends on what is best for Holy Joe.

That was why, while campaigning as Al Gore's running mate, he fulsomely praised Farrakhan on a national radio program. During an interview with April Ryan of American Urban Radio Networks on Sept. 26, 2000, Lieberman sought to reassure the mostly African-American audience of the black-owned broadcasting group about his mixed record on affirmative action and other issues.

When Ryan asked him about Farrakan's caustic response to his nomination on the Democratic ticket, which included questioning his "dual loyalty" to Israel and the United States, Lieberman responded with a meek appeal for mutual understanding.

"Look, Minister Farrakhan has said a few things, including earlier in the campaign, that were just not informed," he said. "But, you know, I have respect for him and I have respect for the Muslim community generally." Asked whether he would be willing to meet with the infamous preacher of hate, he said: "Of course I would be open to sitting down and talking with Minister Farrakhan. It hasn't sort of come together yet, but I look forward to it ... I'd like to do that. I think that's a great idea ... This is a time to knit the country together more and to make us, as Al Gore always says, the more perfect union that our founders dreamed of." Moreover, Lieberman added, "I have respect for him ... I admire what Minister Farrakhan is doing."

What Lieberman said he admired most about Farrakhan was, quite naturally, the minister's massive effort to register black voters. As Ryan later explained to Bill O'Reilly, the would-be vice president was forthright when she challenged his sudden interest in Farrakhan. "He said, 'But it's time for us to come together.' And he's trying to win. That's basically what it is. He wants to win an election and the African-American vote is crucial."

What Lieberman had politely neglected to mention on American Urban Radio was Farrakhan's lengthy record of vicious diatribes against the Jewish people, whom the pseudo-Muslim demagogue has described as "bloodsuckers," as adherents of a "dirty religion" or "gutter religion," as "wicked deceivers of the American people," and as "the synagogue of Satan." Farrakhan offered no apologies for any of those comments, but sensing a chance for fresh publicity, quickly told Ryan that he would be delighted to meet with the Jewish senator.

Not surprisingly, Lieberman's startling overture to Farrakhan stunned and infuriated many of his admirers, both in and outside the Jewish community. The American Jewish Congress scolded the senator, saying, "There is good reason why no reputable political leader of either party has been willing to meet with Farrakhan." New York Post cartoonist Sean Delonas drew Lieberman ushering Farrakhan out of his Senate office with the caption "Thanks for stopping by, Louis ... now who's next?" while a Klansman, a Nazi and Saddam Hussein awaited their turn with him.

From there the reaction continued downhill fast, despite Lieberman's swift backtracking. He promised not to meet with Farrakhan until after Election Day, but that mollified no one. Many observers, especially those who had once admired the Connecticut senator, were revolted by his eagerness to seek black votes by conciliating a racist rabble-rouser. That humiliating gesture, along with his flip-flopping on affirmative action, school vouchers and Social Security, was widely described as a permanent blemish on his character.

Village Voice columnist Nat Hentoff, the right's favorite liberal, lamented that "Lieberman has already diminished himself as a man of principle -- his religious exhortations aside -- by abandoning so many of the positions he has held ... But his most extraordinary act was his desire to meet with Louis Farrakhan, whom he says he 'respects.'" Hentoff expressed doubt that Lieberman would ever overcome "his self-inflicted diminishment" and redeem himself.

Conservative Boston Herald columnist Don Feder was unsparing. "Speaking of political whores, Senator Joe Lieberman could end up having a red-light district named for him ... In a close election, the black vote is crucial to Democrats -- and, sad to say, Farrakhan has a following in the community. To become America's first Jewish vice president, Lieberman is willing to condone the sort of demagoguery that led to the Holocaust."

Comedian Jackie Mason got into the prostitution metaphor too, quipping that Lieberman "has flipped over more times than a mattress in a hotbed motel."

Liberal Washington Post columnist Richard Cohen wrote that Lieberman had "soiled himself with equivocation" over Farrakhan, adding, "It was an ugly sight." In an editorial headlined "Where's the Old Joe Lieberman," Cohen's newspaper regretted the changes in the senator since his nomination for vice president. "Was it an attack of amnesia -- or cowardice -- or a morally backward desire to ingratiate himself with followers of Louis Farrakhan that made Joe Lieberman embrace the leader of the Nation of Islam?" the Post asked. "Whatever the explanation, it was pitiful to watch. Senator Lieberman said, with no credible evidence, that Mr. Farrakhan 'wants to change ... He wants to be more constructive.' The only change we've seen is in Senator Lieberman. And it's been for the worse."

New York Post columnist John Podhoretz charged that he had "sold his soul, and found out it didn't hurt -- so he kept going."

Even the editors of the New Republic, devoted in those days to the advancement of Gore and thrilled with Lieberman as his running mate, could not contain their disgust. "Is this some kind of hideous moral payback, whereby Lieberman's past colorblindness means he must now pay more, not less, homage to his party's worst instincts so as to prove his partisan bona fides?" they wondered. "If so, the price is too high. This magazine remains deeply committed to the ticket on which Joseph Lieberman runs, and, of course, to the man who chose him. But the Connecticut senator seems to have forgotten that pandering is pandering, with or without God. What on earth, or in heaven, is going on?"

After the post-election struggle finally concluded with the Supreme Court's anointing of the Republican ticket, the National Review answered that question in a long, harsh analysis by Jay Nordlinger. He recalled how the magazine's founders, the Buckleys of Connecticut, had enabled Lieberman's elevation to the Senate and how Lieberman had repaid that debt by becoming "Republicans' favorite Democrat." But in 2000, wrote Nordlinger, "he had his rendezvous with Al Gore and national Democratic status, and collapsed like a house of cards. To be sure, the Lieberman style remained intact: the religiosity, the sanctimony, the self-absorption. But the substance of the man seemed to evaporate before our eyes." Cataloging all of his perceived sins, with special attention to the Farrakhan fiasco, Nordlinger wrote scathingly of Lieberman's "awful veneer: the unctuousness, the moralizing, the posturing, the lectures, the sniveling, the [moral] 'wrestling,' the self-love."

Yet he doubted that the senator's reputation would suffer for long, concluding presciently: "But will anyone remember? Hard to say. One can imagine Lieberman regaining his aura: delivering a couple of conciliatory speeches, making nice to Republicans, who are always suckers for Democratic niceness, astonishing as it is."

He only had to make nice to George W. Bush to win back the National Review, Washington Post, New Republic, New York Post and Washington Times, no matter how appalled they once were by his wheedling flattery of Farrakhan. He has regained his "aura," indeed, and now he can pander again, just like the good old days.