Even the FBI says there's no evidence of a bomb plot, but prosecutors in Michigan refuse to set three Arab-Americans free. 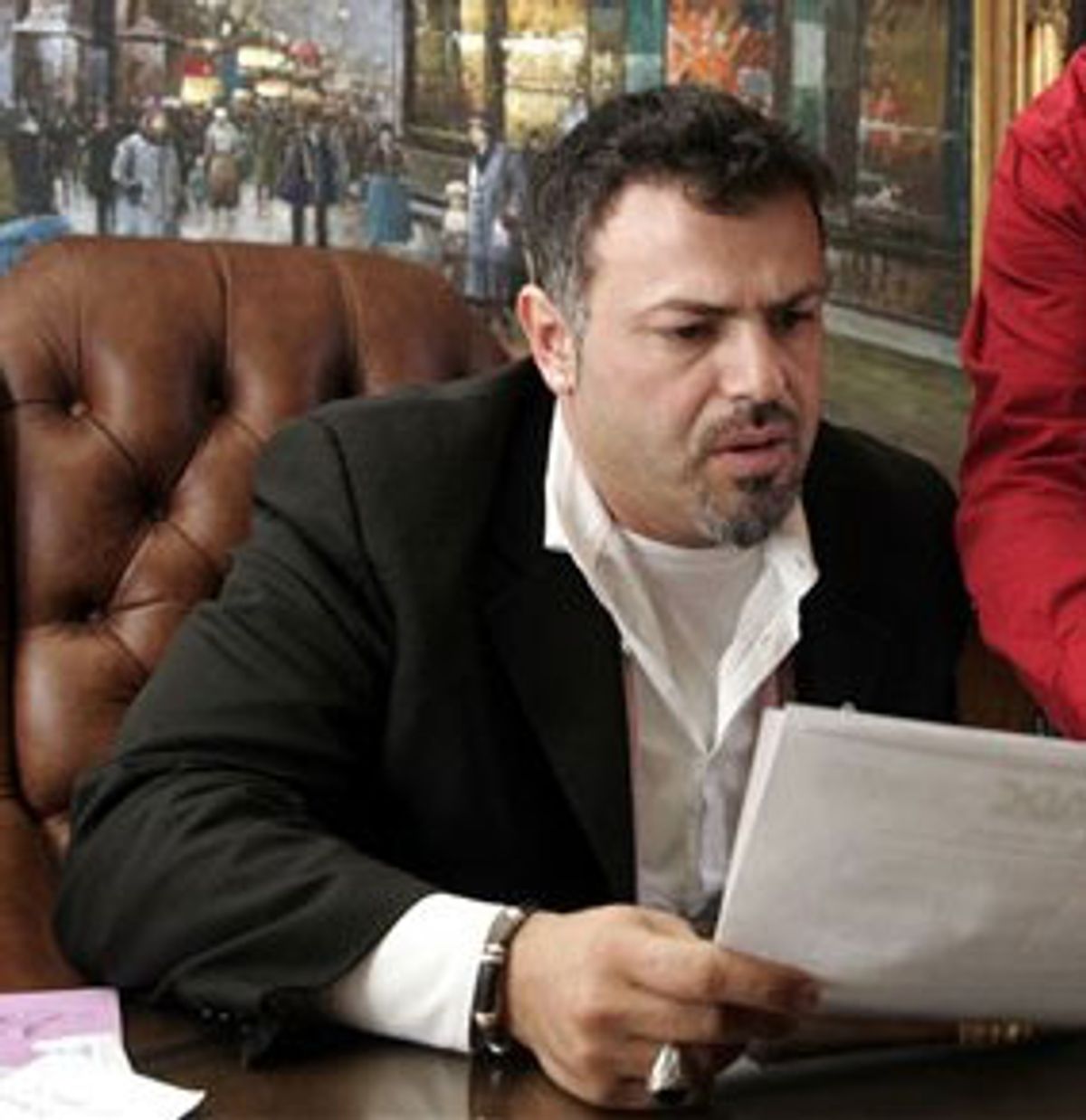 Attorney Nabih Ayad drove two hours north from the Arab-American enclave of Dearborn, a suburb of Detroit, to tiny Caro, Mich., last Wednesday in hopes of springing three of his clients from the Tuscola County jail.

The clients, three young Palestinian-Americans from Texas, had been arrested while driving their van from Wal-Mart to Wal-Mart buying cheap cellphones. The county prosecutor had filed state terrorism charges against the trio, believing they were jihadis plotting to blow up the Mackinac Bridge. Though Ayad knew that the terrorism case was already collapsing, and expected his clients would soon be in the clear, he still wanted to get them out of jail on bond in the interim.

When Ayad reached Caro, however, his clients weren't there. Someone at the courthouse told him the men had been taken to Bay City by U.S. marshals. The state case had been dropped, but the men were facing new federal charges. Except they were no longer accused of being terrorists. They were charged with trafficking in cellphones -- a common practice of buying in bulk and reselling that Ayad insists isn't even illegal. "These are B.S. charges," he fumed via his own cellphone on Wednesday as he drove from Caro to Bay City in search of his clients. "We are going to fight them all the way."

Ayad said prosecutors are trying to save face by charging the men with anything they can, now that initial reports of a plot against the bridge have proved dubious. "To us, it's a way of doing damage control," Ayad said. "They want to come up with anything to get themselves out of this hole they are in."

It's possible that the authorities are trying to hold the men, two brothers and a cousin who range in age from 18 to 23, until they're certain they pose no threat. Or, as legal experts have suggested, federal authorities may still believe in a terror plot but, lacking sufficient proof, have opted for another avenue of prosecution.

It's also possible that Adham Othman, Louai Othman and Maruan Muhareb are collateral damage in the war on terror, unlucky enough to have been Arab-Americans driving through a rural county the day after the Heathrow bomb plot was revealed. At first investigated by the feds as potential terrorists, they were then charged under a little-used post-9/11 Michigan terror statute. When that case collapsed for lack of evidence, they then became, to Salon's knowledge, the first people ever federally charged with fraud for the bulk reselling of cellphones. They no longer face 40 years in prison, but they're still looking at jail time for acts that officials in other states deem unworthy of prosecution, and that police in other states had decided -- after detaining the Othmans and Muhareb -- did not even merit arrest. "If their name was Bill," Ayad snapped, "we would not be talking."

On Aug. 10, British authorities announced that they had made 24 arrests in a plot to use liquid explosives to down airliners en route to the United States from London. Stepping off Air Force One in Wisconsin that morning, the news from Britain still fresh, President Bush called the arrests "a stark reminder that this nation is at war with Islamic fascists." He warned Americans to be on the alert. "We're still not completely safe, because there are people that still plot and people who want to harm us for what we believe in."

Less than 24 hours later, police in Caro, population 4,000, stopped the three men outside a local Wal-Mart with roughly 1,000 cheap cellphones in their van. It was 2 a.m., and they had just purchased 80 cellphones from the store, raising the suspicion of an employee. Less than a year before, federal law enforcement officials had warned their state and local counterparts to be on the lookout for people buying large numbers of prepaid cellphones, since the phones could be used as detonators. The Caro police arrested the Othmans and Muhareb.

The media pounced on the story once local authorities, led by Tuscola County prosecutor Mark Reene, announced that they suspected the three men of planning to blow up the immense and picturesque Mackinac Bridge, the 5-mile span that separates Lake Michigan and Lake Huron and connects Michigan's upper and lower peninsulas. Breathlessly, newspapers and TV reported that the men were trafficking in cheap, virtually untraceable TracFones, an alleged favorite of terrorists, and that they had conducted surveillance of their alleged target. Michigan's WNEM TV-5 reported that the men were Texans, but were of "Palestinian descent" and that the phones, "can be used to remotely detonate explosive devices or even to make methamphetamine." Two days after the arrests, the Coast Guard announced that it had increased patrols near the bridge to ward off any possible attack.

Then the story began to deflate. On Aug. 14, the FBI and the Michigan State Police announced publicly that their investigation showed no evidence of a plot. "There is no information to indicate that the individuals arrested have any direct nexus to terrorism," Daniel D. Roberts, the FBI's special agent in charge, announced in a written statement. "There is no imminent threat to the Mackinaw[sic] Bridge."

Press reports suggested that Reene's evidence about the bridge plot was based on photographs confiscated from the men. But Michigan State Police spokeswoman Shanon Akans told Salon the FBI analyzed the photos and found only "tourist-type" shots. Ayad told me his clients had taken around 20 pictures of the bridge -- when they were stuck on it in a traffic jam. He said most of the confiscated photos were of "ducks and lakes and trees and ponds and things of this nature."

By the 14th, U.S. Attorney General Alberto Gonzales, speaking in Chicago, was already sounding defensive about the Michigan arrests. "I don't know how many of you have ever gone to a store to purchase 80 to 100 cellphones at a time," he said. "I would consider that somewhat unusual and I think it would be perfectly legitimate to say, 'Hey, is there something going on here?'"

But buying cellphones in large quantities is a common practice throughout the United States. Companies sell the cheap phones at a loss, hoping to make money when people buy time on a specific network later, using a prepaid airtime card. Middlemen purchase the phones for, say, $20 apiece, then reprogram the phones so that they can be used with any cellphone service, and resell them at a 100 percent markup. Some middlemen leave the reprogramming to others and pocket less profit. Store owners know that the cellphone companies disapprove of the practice and would prefer that the phones be sold only a handful at a time; the bulk buyers are aware of this and often purchase the phones late at night, when stores are understaffed and clerks are less likely to enforce the restrictions.

When the feds would not take the terrorism case, Reene decided to handle the prosecution himself. He announced on Aug. 15 that he would try the men in state court, saying they had violated Michigan's post-9/11 antiterror law by providing "material support" for terrorism and "surveillance against a vulnerable target." The charges carried prison terms of up to 40 years. "Evidence and information exists to support the charges that have been authorized in these cases," Reene claimed in a prepared statement.

For experts on terrorism, the simple fact that Reene had resorted to state law was a clear signal that there probably was no terror threat. Experts said they were unaware of any terrorism cases since 9/11 where federal officials had not taken the lead and instead allowed states to prosecute would-be terrorists. "I can clearly tell you that federal officials will never turn over the leash in the case if it is a serious terrorist threat," stated Jeffrey Addicott, director of the Center for Terrorism Law at St. Mary's University School of Law in San Antonio, Texas. "They just wont do it." State laws have been deployed only against "eco-terrorists" and others charged with criminal behavior unrelated to the war on terror.

By Aug. 16, Reene's state charges had also collapsed. But just when it looked as though the men from Texas might walk free, the feds stepped in. It is not known why federal officials who had declined to prosecute the men just days before suddenly changed their minds. Neither Reene nor U.S. attorney Stephen Murray would return repeated calls from Salon.

When he turned the trio over to federal officials, Reene released a statement insinuating that the men may still have been involved in some dark international conspiracy. "The nature of the evidence and information at issue in this case has both interstate and international aspects," Reene proclaimed. He said the three men "have each been charged with federal offenses," but did not mention that those new charges had nothing to do with terrorism.

A spokeswoman for the U.S. attorney for the Eastern District of Michigan, Gina Balaya, said the new federal charges, conspiracy to traffic in counterfeit goods and money laundering, are strictly related to the cellphones. The criminal complaint alleges the three men were altering the phones for use on any network, like a regular, more expensive cellphone. What Balaya did not address is the novelty of the prosecution. A spokesman for a cellphone company, who asked that neither he nor his company be identified, said he was unaware of any previous prosecution anywhere for the bulk reselling of cellphones.

The prosecution is particularly remarkable given what happened in another very similar case last week. Just three days before the Michigan arrests, Osama Sobhi Abulhassan and Ali Houssaiky were apprehended in Marietta, Ohio, and admitted they had bought about 600 phones in the preceding months. In that case, too, the FBI quickly announced there was no terror threat, and state officials dropped felony terrorism charges against them on Aug. 14. Neither Abulhassan nor Houssaiky face any charges for simply buying the phones in bulk. "There is no evidence to justify any federal charges," Michael Brooks, a spokesman for the FBI in Cincinnati, told Salon.

The three Michigan defendants had apparently had run-ins with the police prior to passing through Caro but were never arrested. Ayad claimed that in their interstate quest for cheap cellphones, his clients had talked about the business to the FBI in Arkansas and state police in Wisconsin, and neither expressed concern about their entrepreneurial spirit. Louai Othman has also said the men were questioned and released in North Dakota, South Dakota and Minnesota.

In one possible explanation for the new charges in the Michigan case, Addicott, the terrorism expert, said federal prosecutors may have become convinced that there was, in fact, some "nexus" to terrorism but had insufficient evidence to prosecute successfully. Instead, they are going after the cellphone activity. "I can speculate that they may, in fact, believe there are indications of something that is not right," Addicott noted. "They will use other tools to dispose of the case. That happens all the time."

But the arrests in Michigan and Ohio angered advocates for Arab-Americans and American Muslims who blamed a pervasive climate of fear in the United States, fanned by fiery rhetoric from the very top. When President Bush spoke of a war against Islamic fascists, said Dawud Walid, executive director of the Michigan chapter of the Council on American-Islamic Relations, he encouraged the worst instincts of police. Walid invoked a classic American television show: "All that," Walid warned, "sets the climate for these Barney Fife cops."

Dubious arrests also threaten to sabotage relations between American Muslims and law enforcement officials who may need close cooperation from the Muslim community to ferret out real terrorist plots. "This is not how we face and fight terrorism," said Imad Hamad, the regional director in Michigan of the American-Arab Anti-Discrimination Committee. "We have to keep in mind that terrorism is our common enemy."