Democrats roll the dice on Nevada

The party pushes aside New Hampshire in favor of a caucus in Harry Reid's home state, and its presidential hopefuls will pay the price. 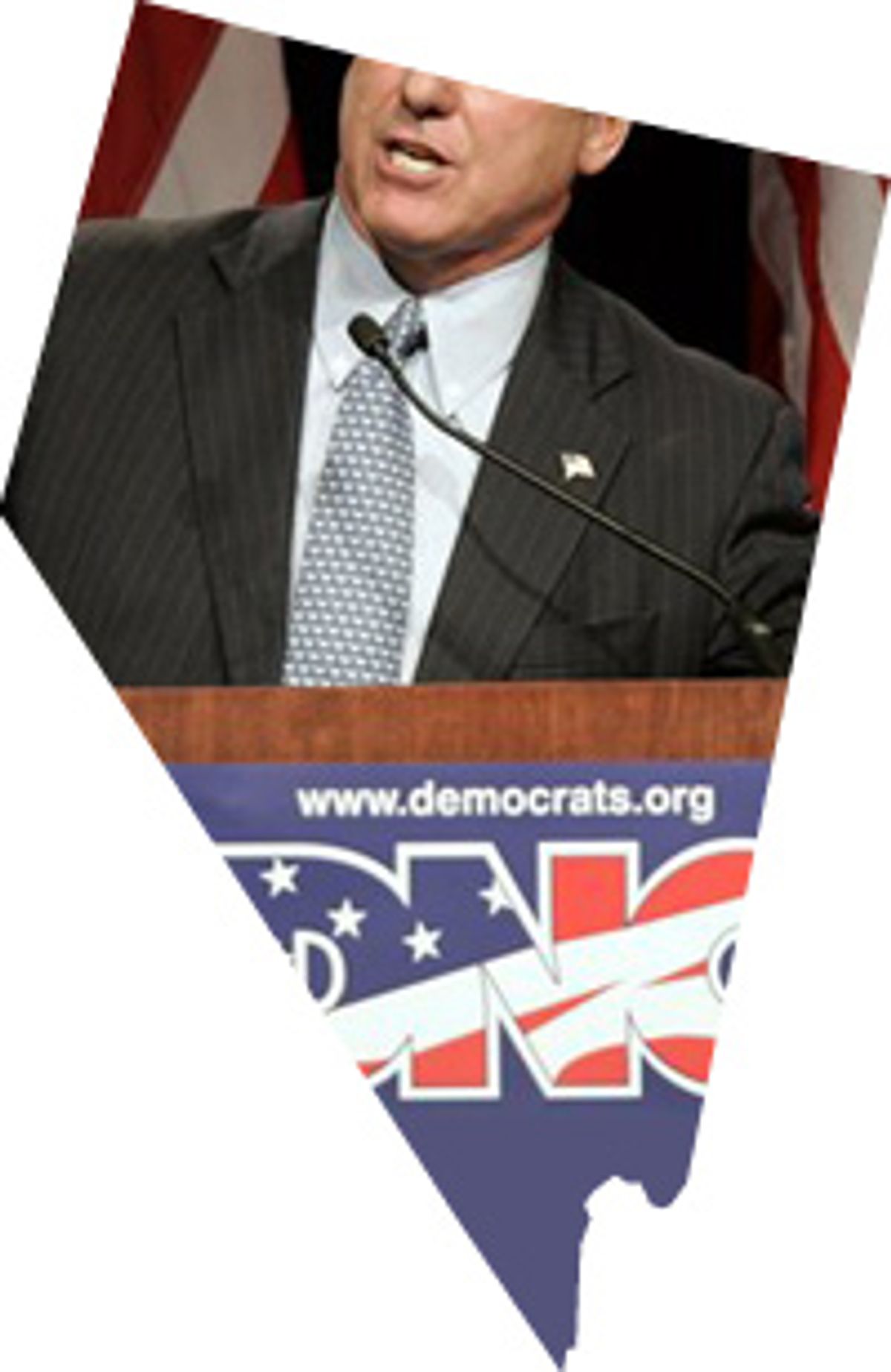 After the 2004 elections, the Democrats went through a period of soul-searching to find a way to reach out to economically hard-pressed voters animated by what pollsters call "moral values."

Less than two years later, over this past weekend the Democratic National Committee formally approved a plan to dump the New Hampshire primary from its traditional second spot on the presidential calendar and replace it with the state least likely to help the Democrats bridge this God gap. Yes, the DNC has decided that after the opening-gun Iowa caucuses of January 2008 will come the three-lemon spectacle of the Nevada caucuses. As a DNC member active in the rules fight put it sarcastically, "Great. Now the candidates can go from pandering to hog farmers in Iowa to appealing to whores and lap dancers in Nevada."

These are sentiments unlikely to please the Reno Chamber of Commerce or Senate Minority Leader Harry Reid, who put his chips on the line as the chief booster for his home state. But the problem in this era of YouTube is that what happens in Las Vegas doesn't just stay in Las Vegas. With the Republicans maintaining the time-tested Iowa-then-New Hampshire schedule, you can be sure that GOP operatives will be monitoring every image of Democratic presidential hopefuls campaigning in and around casinos for the inevitable embarrassing moments ("Is that snake part of your act?") that come with politics in a state dominated by the often-gamy gaming industry.

To the uninitiated, it may seem obsessive to brood about the 2008 political calendar 17 months before Iowans will assemble in school cafeterias and church basements to pick their White House favorites. But the order and timing of the caucuses and primaries will shape the contours of the Democratic nomination fight and influence the party's chances of capturing the Oval Office. If the DNC's new schedule holds, in January 2008 the candidates will pinball in eight days from Iowa to Nevada to New Hampshire. Then, after a merciful one-week break, will come the South Carolina primary.

For nearly 40 years, the Democrats have been the party of peace, prosperity and endless tinkering with the rules for nominating a president. Part of it is the party's abiding commitment to affirmative action, which has led to hair-splitting wrangles over the practical meaning of diversity.

The Democrats have also been comically ham-handed at trying to tilt the order of the primaries to achieve a desired ideological outcome -- most notably clustering Southern primaries in the 1980s only to nominate emblematic Northern liberals Walter Mondale and Michael Dukakis.

The one argument in favor of this rejiggered calendar is that it adds balance to a process that has long been dominated by Iowa and New Hampshire, two white-bread states with the ethnic diversity of a 1950s sitcom. Nevada, about 20 percent Hispanic, is a Western swing state that bitterly frustrated the Democrats in 2000 and 2004, as both Al Gore and John Kerry fell 20,000 votes short of victory there. And South Carolina, while a bastion of Southern Republicanism, has a population that is 30 percent black.

But this added diversity comes at a dangerously high price. Democrats campaigning in Nevada cannot avoid the casinos, since the blackjack dealers and cocktail waitresses are integral parts of the party's base. Colorado, another Rocky Mountain state where Democrats are making inroads, would have been a politically shrewder choice than Nevada, but local party leaders preferred to work to bring the 2008 convention to Denver. Unlike Iowa, Nevada lacks a vibrant caucus tradition, with just a paltry 9,000 Democrats participating in 2004. A Nevada primary would be more ... er ... democratic, but the party thought that a caucus might mollify New Hampshire, which thus keeps its nearly 90-year lock on holding the nation's first primary.

Having covered the last seven New Hampshire presidential races, I am unabashed in my partisanship on behalf of the primary and the living-room style campaigning that goes with it. Not only are voters here admirable skeptics (decisively rejecting George W. Bush's royalist claims in 2000), but the state deserves to be rewarded by the Democrats as the only one to switch from red to blue in the 2004 general election. Diversity would have been served by giving a Western state (even Nevada) its own campaign week after Iowa, New Hampshire and South Carolina.

Instead, by wedging Nevada between Iowa and New Hampshire, the DNC once again accelerated the rush to judgment that has been producing de facto presidential nominees earlier and earlier every four years. With four delegate contests now slated for January, it is conceivable that the 2008 Democratic race could be effectively over by Groundhog Day.

Back in the days of a more leisurely and rational calendar that began with Iowa in February and continued for nearly four months, Bill Clinton did not lock up the 1992 nomination until he won the California primary in early June. This traditional timetable set up a perfect rising narrative arc in which Clinton went from electoral triumph to choosing Gore as his running mate to the New York convention to the triumphant post-nomination bus trip all in the space of two months.

By contrast, Gore and Kerry had little to do for months, other than campaigning languidly without winning many votes, after they were anointed as their party's nominees in early March. The rapidity with which Kerry swept to the nomination because of the clustering of the 2004 primaries in February contributed to his dazed and confused failure to react to the Republican "Swift boat" ads that helped reelect Bush.

For more than two decades, everyone from earnest political scientists to cynical campaign consultants has been peddling their own schemes for reforming the primaries. My own personal plan, which has about as much chance of being adopted as I do of being on the ticket in 2008, would space four kickoff states a week apart from each other in February -- beginning with Iowa, then going through New Hampshire, a Western primary (preferably Colorado) and finally South Carolina. After that, the primaries would slowly unfold from March till June, giving voters a chance to deliberate seriously over their choice.

The DNC -- reflecting the zigzag logic that often comes with collective decision making among Democrats -- did make one tentative move toward reducing the frontloading of the 2008 schedule. The party's rules committee approved a proposal, which will go to the full DNC early next year, that would grant bonus delegates to states that wait until the spring to hold primaries and caucuses. These bonus delegates may not prove enough of a lure to persuade state legislatures to schedule later primaries, but at least the DNC is belatedly recognizing that the party risks choosing a candidate in February and becoming overwhelmed by buyer's remorse (prompted by scandal, gaffe or just a changed political environment) in May.

Since presidential politics is governed by the law of unintended consequences, it is premature to assess which 2008 contenders will be aided by the DNC's misguided attempt to downgrade New Hampshire. But having offered that caveat, I would nervously guess that Hillary Clinton benefits from the early clustering of primaries and caucuses, since it makes it harder for an underdog challenger to emerge. And John Edwards has to be pleased with the exalted status of South Carolina, his birthplace and the site of the one major primary he won in 2004.

All that is speculative. What we do know is that the Democrats have made a huge gamble on Harry Reid's home state. And as the DNC doubles down on Vegas and double-crosses New Hampshire, the betting here is that the party will rue the day it got suckered by the high-stakes game called the Nevada caucuses.