The dismal, humorless world of Jack Bauer has us rooting for the terrorists. 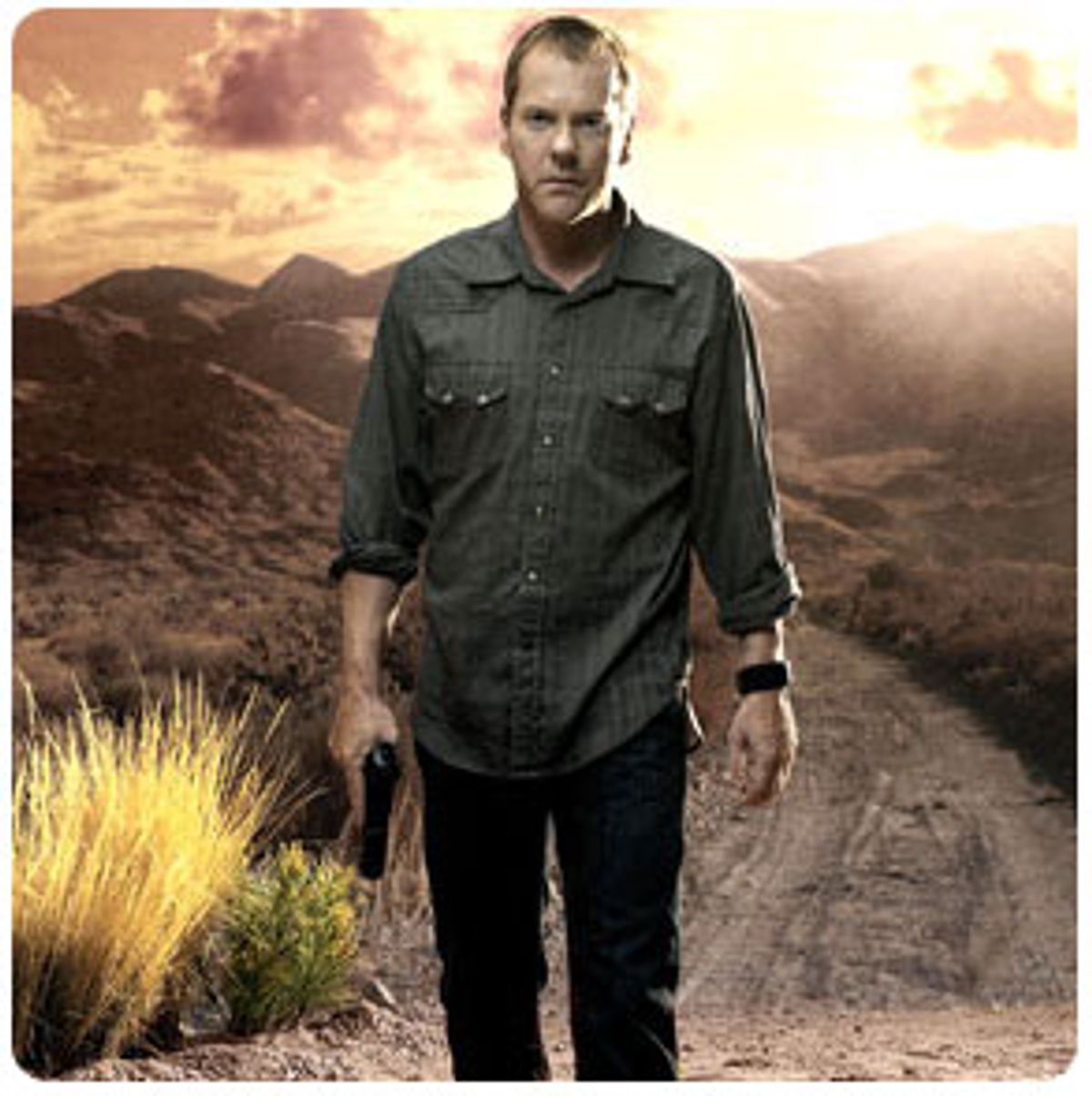 Every January a little psychodrama happens in my living room. TiVo dutifully begins to record episodes of the new season of "24" and I wrestle with my long-standing love-hate relationship with the show. I love what everyone else loves: the series' whip-crack plot twists and gasping cliffhangers. I hate what seems to bother nobody else: pretty much all the main characters.

Of course, "24" also looks dismal, shot in a murky industrial palette of black, indigo and cathode green, and with actors who all look like they've just been called in for an IRS audit. But even the show's visual poverty makes it ideally suited to the tiny screen of my video iPod where, unlike, say, "Lost," it can be used to while away hours on planes or trains without fear that I'll miss something.

It's usually during the first few episodes that the grinding monotony of all the ongoing characters tempts me to bail out entirely. None of them has changed or developed an iota since Season 1. Yes, there are always zingy supporting performances, most recently, Gregory Itzin's weaselly President Logan and Jean Smart's high-strung first lady. But those characters are almost always killed off or locked up by the season finale, and only the most tenacious (like Penny Johnson Jerald's Sherry Palmer) have managed to fight their way back for another round.

The ongoing characters -- Jack, Tony, Michelle, the egregious Kim, and various other CTU staffers -- have been getting more and more annoying every year, so there was ample joy in Mudville (or at least in my house) when Tony and Michelle got offed last season. Never will we be expected to care about their desperate attempts to rescue each other again! And, of course, there's Chloe, whom everyone professes to adore, but let's face it: The only reason Mary Lynn Rajskub pops in this role is because everyone else is so colorless. There's really not that much to Chloe: Where the other CTU staffers are grim and earnest, she's grim and surly.

My biggest complaint, however, is the clenched humorlessness of CTU. To which people will often respond that a 24-hour nuclear/chemical weapons/presidential assassination crisis is hardly the time for jokes. Au contraire, mes amis. As Jerry Dunn's invaluable subcultural slang dictionary, "Idiom Savant," demonstrates, the professions that generate the most extensive, creative and funny slang are precisely the ones that deal in life-and-death situations: cops, nurses and soldiers. Black humor and wisecracks are crucial tools to building camaraderie in high-stress jobs that expose people to the worst of human behavior and suffering.

But there's no camaraderie at CTU. Instead, these waspish drones bicker and intrigue like the staff of an insurance company or a poetry magazine -- any office where the stakes are so low that people get easily sidetracked into currying favor and screwing their enemies. Don't tell me there's no room for esprit de corps in CTU, when everyone who works there can always be persuaded to spare a few minutes to berate a co-worker or have a heart-to-heart with some wigged-out relative. The most miserable trick of "24" is that it takes what's probably an exciting and meaningful profession and makes it seem just like the swamps of mean-spirited triviality where most Americans work.

A friend of mine who briefly sampled then dismissed "24" insists that the whole show is an elaborate setup, designed expressly to give Jack Bauer an excuse for behaving like a total asshole. She has a point. If the rest of CTU's staff bantered, or did anything else to more closely approximate humanity, they'd only show up Jack for what he really is: an insufferable, self-righteous borderline sociopath. He's truly the dreariest of the lot. Many's the time I've watched him yelling into his cellphone like the world's worst boss ("I don't care! Get me those protocols right now!") and thought that a little nuclear meltdown might not be too steep a price to pay to see this guy on a slow boat to China. Maybe the show's creators read my mind, because that's exactly where Jack was the last time I saw him.