You, sir, are no Abe Lincoln

Bush may wish he measured up to the Great Emancipator. But he does stack up quite nicely against Andrew Johnson. 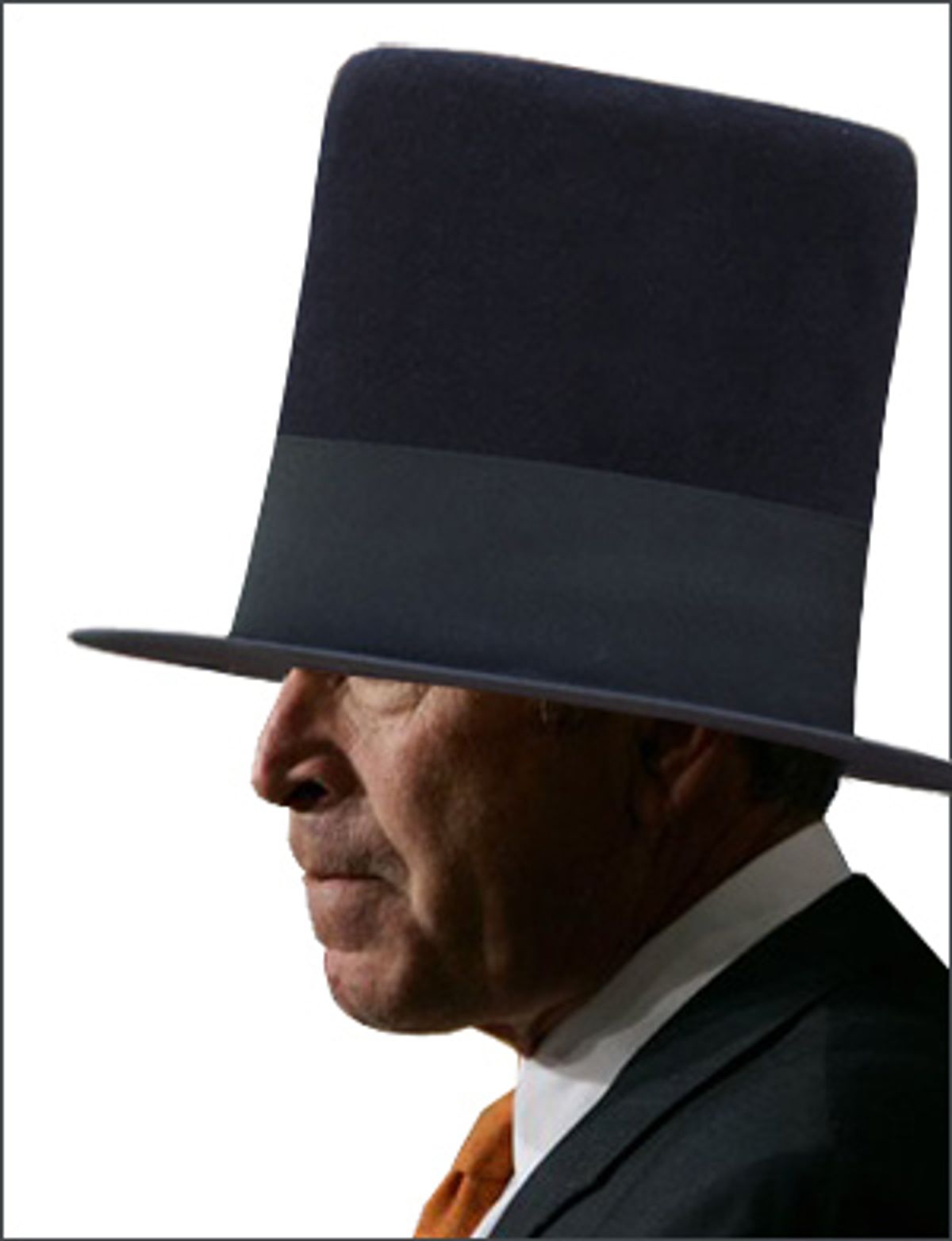 News reports about President Bush's tragically short and recently concluded Crawford vacation were dominated by the bizarre information that the president's aprhs-brush-clearing reading included "The Stranger" by Albert Camus. But lost amid the resulting snark was another item on the president's alleged summer reading list: "Lincoln" by Richard J. Carwardine. It would be pleasant to believe that Bush was learning about this great leader in an attempt to upgrade his own modest executive skills. It seems more likely, however, that Bush is attempting to console himself by imagining ways that he is like the Great Emancipator. Alas, those similarities are either superficial or illusory. If anything, Bush is the anti-Lincoln; he bears far more resemblance to another 19th century statesman, Lincoln's inept successor Andrew Johnson.

Every president, of course, tries at some point, in the words of Lincoln biographer David H. Donald, "to get right with Lincoln." We can be glad that the current president has apparently not yet begun to speak directly to Lincoln's portraits, the way Richard Nixon did during his waning hours in the White House. But Bush and his supporters have tried to claim the mantle of Lincoln's greatness.

"In a small way, I can relate to the rail-splitter from out West because he had a way of speaking that was not always appreciated by the newspapers back East," Bush said in 2005. On the eve of the 2004 election, former Bush speechwriter and loyal supporter David Frum quietly altered a famous Lincoln quote to support a more elaborate comparison. "Lincoln was the last US president to seek re-election in the middle of a big war whose outcome remained uncertain," he wrote in the Financial Times. "He was disliked in Europe because he too was seen -- and correctly seen -- as a disturbing and destabilizing force in the world, who spurned peace in favor of victory. And he was, finally, the author of the words that best sum up how millions upon millions of Americans feel about the 43rd president: 'We cannot spare this man. He fights.'"

Last month, Berkeley law professor John Yoo, author of many of the Bush administration's now-infamous torture memos, extended the analogy. The Hamdan case, he suggested, was the equivalent of obstacles placed in Lincoln's way by a pro-slavery Supreme Court. "If the commander in chief couldn't have taken wartime actions on his own," he explained in the Los Angeles Times, "then the slaves would have remained Confederate property during the Civil War."

It's easy to see why an unpopular president and his beleaguered supporters would find similarities between Bush and Lincoln. Like Bush, Lincoln before his election was an obscure, inexperienced provincial figure with an at-best shaky military record. (Lincoln served nearly three months in the militia during a flare-up of hostilities with the Indians. Though he never saw combat, he recalled, "I had a good many bloody struggles with the mosquitoes, and, although I never fainted from loss of blood, I can truly say I was often very hungry." )

Like Bush, Lincoln found himself leading the nation in a war he didn't anticipate. He was reviled by much of the public as a buffoon, and was mocked even by members of his official family. Many professional soldiers were withering in their criticism of his decisions. He pushed executive authority to extremes never before imagined; he created the first "national security" apparatus since the Alien and Sedition Acts fiasco of 1798; he showed no hesitation about curtailing civil liberties, aggressively used military commissions to try American citizens for aiding the enemy or even speaking against the war effort, suspended the writ of habeas corpus, and maintained his own system of extra-legal executive prisons, including one that stood on the site of the present Supreme Court building.

But the differences are far more important than the similarities. On the personal level, Lincoln had none of Bush's obstinacy and egotism. He scorned yes men, and surrounded himself with Cabinet officials better known than he was, refusing to purge even those actively working against his own political interests. He had no personal vanity at all (when a political opponent accused him of being "two-faced," Lincoln responded, "If I had two faces, would I be wearing this one?"). The historical imagination rebels at the very idea of his swaggering around in the cavalry equivalent of Bush's flight suit. He was always ready to sit down with his adversaries, favored compromise whenever possible and never held a grudge. "With malice toward none, with charity toward all" was for Lincoln more than a rhetorical flourish; it was the key to his greatness.

Most important, Lincoln was a lawyer. It is hard to find any sign that Lincoln thought himself above the law. He had none of Bush's scorn for procedures and rights. He used executive authority in an emergency -- and always dutifully reported to Congress and asked for its ratification as soon as a new session began. He restricted civil liberties temporarily, and without enthusiasm -- he once compared his suspension of habeas corpus to the drugs doctors give to induce vomiting. Unlike this administrationwhich will not ask for legal authority even when it knows it will receive it -- Lincoln never did anything to prove a point. He didn't have an authoritarian bone in his lanky body. His objective was victory for the Union, not power for himself.

George W. Bush is Lincoln the way Dan Quayle is Jack Kennedy. Bush does, however, stack up quite nicely against Andrew Johnson, one of the least successful presidents in our history. That's because, even though Bush has most of Johnson's flaws, he runs almost no risk of being impeached by his own party.

Johnson was another untutored figure from the frontier. Personally, he and Bush are goober peas in a pod: stubborn, arrogant, intolerant of anything but complete support, convinced that compromise is weakness and criticism is treason. Like Bush, Johnson relied on a few sycophants; like Bush, Johnson would scarcely meet with, much less compromise with, his critics. Once in 1865, when the Radical Sen. Charles Sumner of Massachusetts pleaded with Johnson to change his Reconstruction policy, the president responded by spitting tobacco juice in Sumner's silk hat. Johnson had his own struggle with alcohol -- during his vice-presidential inaugural address in 1865, he was falling-down drunk. He was rigid, angry, resentful, impulsive and grandiose. He liked to compare himself to Jesus and once publicly denied that he was Judas Iscariot. Johnson even had a party-hearty offspring problem: His son Robert was so frequently dissolute and drunk in the White House that the president considered sending him abroad on a convenient diplomatic mission.

Like Bush, Johnson early in his term had military power, political popularity and an opportunity at greatness; like Bush, he threw it away in pursuit of vengeance, personal vindication and a narrow, extreme political agenda. If Bush is hoping that future historians will paint a different portrait of him than contemporary reports, he should consider that history has not been kind to Andrew Johnson.

It would have been nice if Johnson had been more like Lincoln. It would be even nicer if Bush would try to emulate him. It's a bit late, however. Bush has already made one of the most important mistakes that Lincoln avoided. The story is right there on pages 177 through 180 of Carwardine's "Lincoln." If only Bush had read it sooner!

Early in the war, an overzealous American commander halted a British ship on the high seas and arrested two Confederate envoys on their way to London. The act was hugely popular with the American public, which felt about England the way Bill O'Reilly feels about France -- but it threatened to bring Britain into our Civil War on the side of the Confederacy. Lincoln at first felt defiant, but when he calculated the odds, he meekly released the captives and paid compensation to the Crown. It was inglorious, but, as Carwardine notes, "Lincoln had navigated past the greatest point of danger: 'two wars on his hands at a time.'" Lincoln won the war that came upon him, but he never chose it.