Westerners who came here in the '70s left magnificent travel writing that captured the rugged, captivating land before war tore it apart. 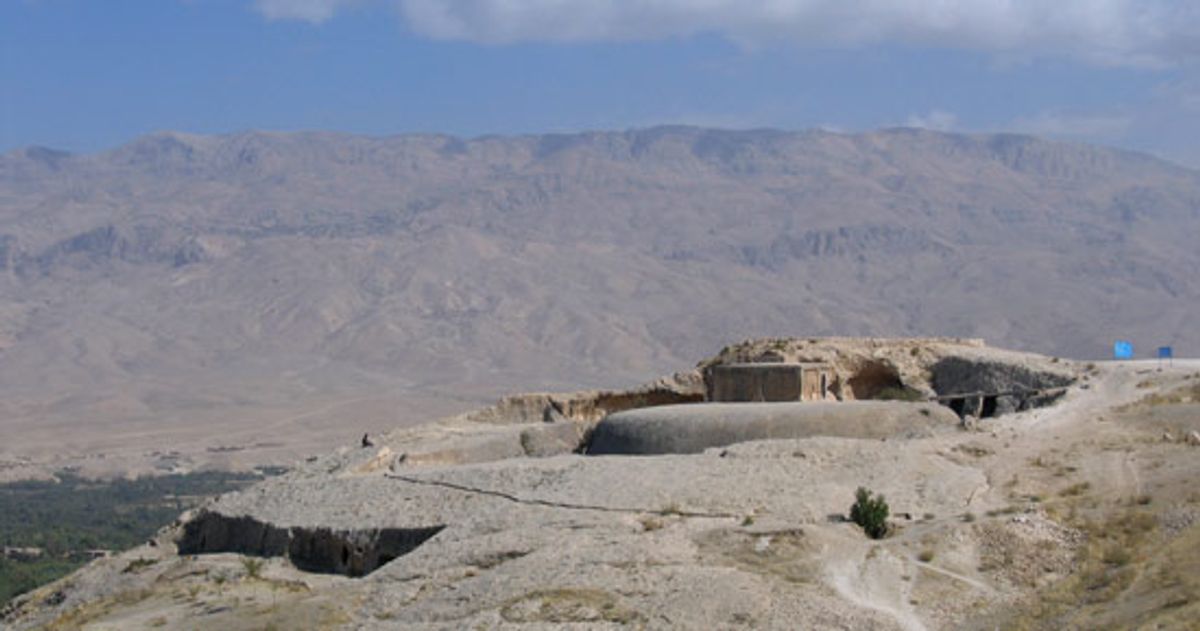 Unless you are one of those intrepid Japanese who turn up occasionally here as in the remotest of places, chances are that you're not visiting Afghanistan as a tourist. There hasn't been much of that since the early '70s, when shaggy young Westerners made their way through Afghanistan en route to India, smoking hash and buying those bulky embroidered sheepskin coats that still lurk in vintage stores back home.

Today most foreign visitors either have a job to do or are visiting expat friends. And it may feel self-indulgent to travel for pleasure in Afghanistan now -- why aren't you helping the poor or starting a business and working six days a week like the other internationals?

It shouldn't. The country badly needs tourism to bring cash to the provinces, especially isolated, mountainous areas unlikely ever to develop other legitimate sources of income. While many visitors are under the impression that Kabul is safer than the outlying provinces, the reverse is usually the case. Common sense would dictate staying out of actual war zones -- these days, that's Helmand and Kandahar provinces -- but after six trips to Afghanistan and visits to 42 other countries, I'd say that the 10 Afghan provinces I've visited are no more dangerous than rural South America or Africa, places that routinely attract determined visitors.

These journeys, challenging for me, were nothing special by the intrepid standards of the '70s, the era of the last traditional travel books about Afghanistan -- or perhaps the last era when one could write a travel book about Afghanistan that doesn't reflect the sadness of the decades of war. (Rory Stewart's much-acclaimed "The Places in Between" is a travel book with the innocence and much of the joy removed, as befits the grim winter of its 2002 setting.) My two favorites from this period, Peter Levi's 1972 "The Light Garden of the Angel King" and David Chaffetz's "A Journey Through Afghanistan: A Memorial" (1981), recount long journeys by horseback, foot, car, bus and small plane across parts of Afghanistan rarely traversed by foreigners today. They also illuminate the last days of a medieval rural society before war and television opened it to the outside world.

Levi, then a 40-year-old Oxford scholar and a converted Roman Catholic ordained as a Jesuit priest, went to Afghanistan in search of Hellenistic ruins. His travel companion, the late Bruce Chatwin, became much better known, but Levi went on to hold an Oxford Chair in Poetry in the 1980s and published three books of poems as well as works of classical scholarship.

The donnish Levi is predictably disdainful of the hash trade: "Every kind of smuggling device was for sale, strings of hash beads, hash belts, hash-heeled shoes and for all I know hash codpieces." But he reveled in every possible Afghan pleasure besides sex and drugs, from the varieties of apricots and birds to the Greek-influenced pillars of Kushan architecture.

Easily the equal of the better-known Robert Byron as a stylist, Levi shares the same British bite and aesthetic passion. Here is an observation on the several-days-long horseback trip from Chaghcharan to the circa A.D. 1200 minaret of Jam, the second highest in the world at 213 feet: "We were facing a composition of rock, waterfall and tree like a Chinese drawing, and when we climbed above it we saw a series of fine, fresh-looking goat drawings on the rock face. Whoever was responsible, these were crisp, formal, observant drawings and there is no age of history or of prehistory they would have disgraced."

David Chaffetz echoes Levi's aestheticism, but he was just out of Harvard (class of '76) when he made his trip, with a young man's urge to prove himself and a certain relish in physical hardship. His broad acquaintance with Farsi and the Quran enriches both his account and his relationships with the Afghans he meets, which go much deeper than Levi's. (Levi admits to little Farsi.)

He and his companion, Willard Wood, a French language translator in later life, bought horses and went to the ruined caravanserais and mosques that are so far off the road the rest of us only hear of them in rumors. I've never heard of any other Westerners who spent so much time in the high mountains and dasht, or plains, of eastern Herat province, in Farah, Baghdis, Maimana -- ancient areas rich in history and ruins. Someday I mean to follow in their footsteps on a wonderfully described horse- or foot-only path up from Obeh -- no metropolis itself -- to visit a splendid ruin called Shah-i-Mashhad in Baghdis province of which Chaffetz says, "The love of the workman himself is as fresh as though the stucco were unset still."

Chaffetz echoes Levi's high British flourish and caustic epigrams. He's a particularly keen observer of people's behavior: "Waiting in line was a skill; the Heratis knew how to look as though they had been waiting in line for hours, when in fact they had just taken a seat ... The louder a Herati complained, the less one should have believed him." Or, "For his past absence, he excused himself on account of a sick relative -- which meant that I shouldn't ask any further. Oh, the convenient sick relatives of the Afghans."

There is no recent (post-jihad period) general history of Afghanistan in English by a Farsi speaker, beginning with prehistory and continuing to the present. For this, consult the painless summary in the Nancy Hatch Dupree guidebook "Afghanistan" (widely available in original and pirated editions in Kabul).

Recent events are covered by all too many books, but most of them are potted summaries of others' works and are filled with errors. Imagine setting oneself up as an expert on French history or politics without being able to read a French newspaper or talk to a Frenchman -- well, there is a small shelf of works about Afghanistan's recent history by people who do not speak either Farsi or Pashto and somehow don't see this as a problem.

I can recommend one book by an Afghan, Amin Saikal, "Modern Afghanistan: A History of Struggle and Survival" (2004), covering the period beginning with the Durrani dynasty's coming to power in 1747. Saikal, an academic in Australia, writes with great authority about the structural factors in Afghan society that he believes have led to its many problems. Unlike the Western experts who focus on "visible sociological and geo-strategic factors," Saikal looks at "relationships between elite behavior and outside power rivalry." "In a nutshell," Saikal says, "polygamic rivalries within the successive royal families from the end of the eighteenth century to the pro-Soviet communist coup of April 1978" derailed Afghan efforts to found a stable state. Disgruntled royal relatives called in outside aid to depose their kinsman the king, which resulted in Afghan governments requiring foreign support to stay in power.

I don't buy Saikal's analysis entirely -- and I am suspicious of the Afghan tendency it exemplifies to blame outside powers rather than Afghan society itself for the country's turbulent history. But he has an enviable command of the historical material, especially before the early 1980s when he fled Afghanistan. And while it's clear here and there that Saikal's first language is not English, his intelligence and analytical ability transcend the sometimes stodgy prose. The book is available now only as a pricey hardcover, but a paperback edition is coming out in December.

After this heavy lifting you may be in the mood for more travel, this time with the youthful hero of James Michener's 1963 "Caravans," set in Afghanistan in 1946. I'd avoided reading this early Michener novel for years for stupid snobbish reasons, and when I picked it up this spring, I found that some of the scenes were set in the very province I was going to visit, Nimroz, which Michener traveled through in a long trip to Afghanistan in 1955.

"Caravans" isn't the packaged late-Michener multigenerational saga, but a surprisingly nuanced and unpredictable thriller that morphs, awkwardly, into a love story. But in addition to the evocative descriptions of large swaths of Afghanistan, Michener offers fascinating cameos of Afghans in the first generation of modernity. Unlike Levi and Chaffetz, whose encounters tend to be either with the working class or with officialdom, Michener introduces his hero to Afghan professionals and aristocrats.

The hero, Mark Miller, is employed in the American Embassy in Kabul, which allows Michener some set pieces about diplomatic life, but the book gains momentum when Miller makes his way to Kandahar, Zaranj and back up through the central mountains of Afghanistan. At the start he's on an official mission to track down missing American beauty Ellen Jasper, and later, he's part of a nomad caravan crossing Afghanistan's central massif.

What separates "Caravans" from the rest of my long shelf of books on Afghanistan is sex. There's almost no inkling in most of those books that this activity exists, though the family sizes in Afghanistan argue otherwise. And in an instance where the '50s seem surprisingly liberal, not only is the missing American woman married to a progressive Afghan, in fact an Afghan too progressive for her, but Miller has a sweet affair with the teenage daughter of the nomad chief. (This being 1963, it's his first sexual experience, too.)

Michener covers almost as much ground as Levi and Chaffetz, also on foot or horseback, with much of the action set in the now-embattled south. Miller's trip across the desert from Kandahar through Helmand province -- a very dangerous place that produces a third of the world's heroin -- to Zaranj is not on the tourist route today. (I flew into Zaranj from Kabul.) But "Caravans" also features mullahs who attack and spit on unveiled women in the street and a public execution, thankfully no longer a part of Afghan life. Partly through his encounters with these experiences, Miller changes and grows up in Afghanistan. Like Levi and Chaffetz, the young Michener suggests that Afghanistan is not merely a good place to get lost.

Afghanistan Books Taliban The Literary Guide To The World Travel