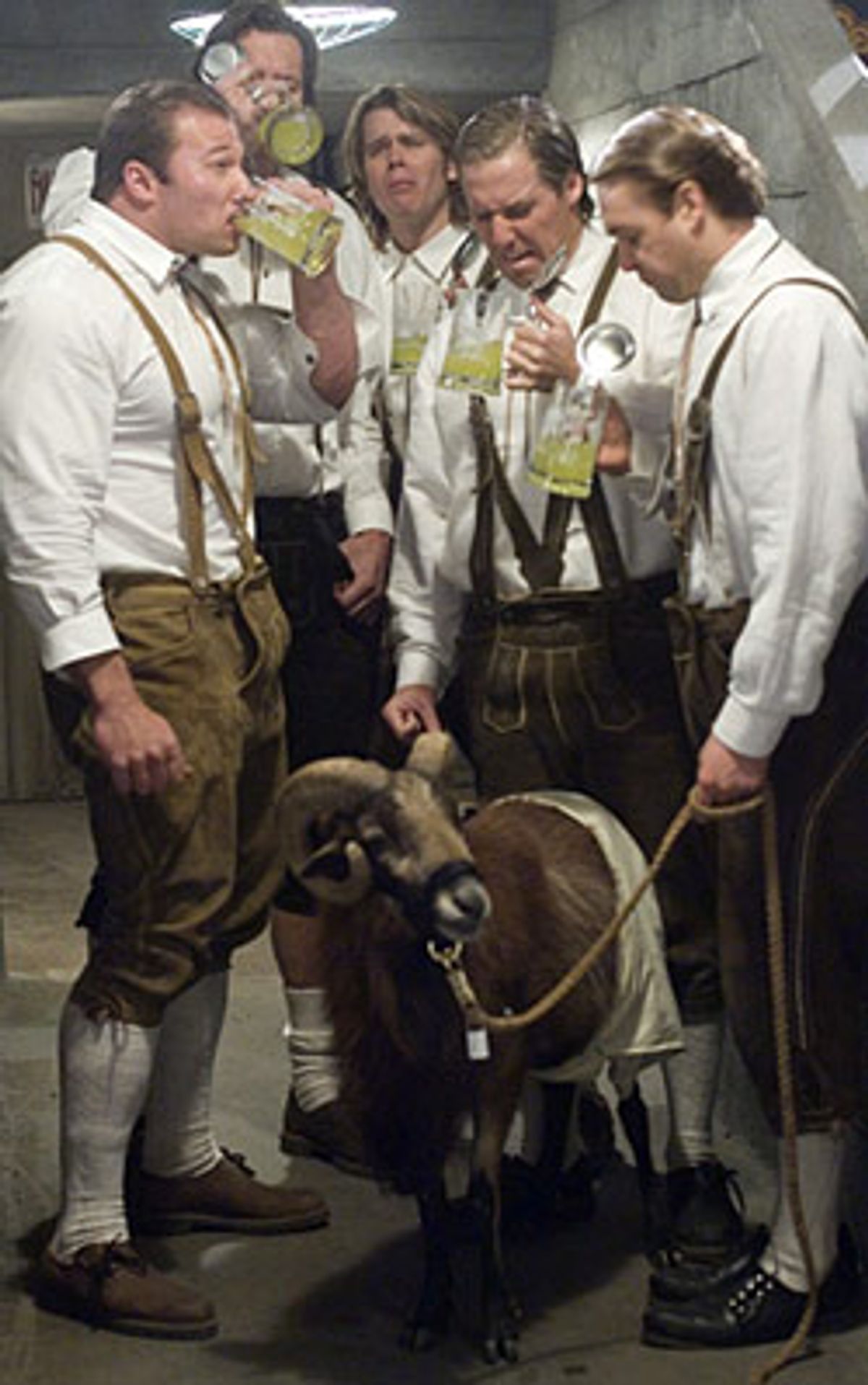 Dumb comedy is one of the hardest things to write about or talk about. Mostly because you have to use such little words, so dumb people can understand you. No, wait! That's not what I mean! Absurdist humor is actually a delicate instrument, and the line between stupid and hilarious -- or rather, the intersection of stupid and hilarious -- is such an individual matter, that one person's pants-peeing delight is another's snoozapalooza.

So I can't claim to know, in any scientific way, that "Beerfest," the high-concept new movie from the Broken Lizard comedy troupe, is a disappointment. It's always amiable and occasionally very funny. In telling the story of a secret Fight Club-style drinking competition that literally takes place beneath Munich's famous Oktoberfest, it hopes to become the ultimate frat-boy beer-drinking cult movie. I don't think it gets there. I had some good chuckles but hardly any uncontrollable, tear-producing guffaws, and I watched it with a large and diverse New York audience composed of actual citizens (not just a roomful of poker-faced critics) who seemed to have about the same response.

I think the Broken Lizard guys have flashes of brilliance (here as in their previous feature, "Super Troopers"), and their combination of gutter crudity and slightly more cerebral absurdity is appealing. As a devoted fan of such recent dude-humor classics as "Old School," "Road Trip" and even the unjustly derided "Saving Silverman," I long for some new blood in the field. But something about the B.L. group dynamic just isn't working for me. They expend too much time on big, dumb, obvious jokes -- like making all the German villains in "Beerfest" wear lederhosen and talk like girly-man versions of Arnold Schwarzenegger -- and toss off much funnier material in two seconds. Nobody expects mordant, Lewis Lapham-style political satire in a movie like this. But I frankly believe the Lizard boys are selling themselves, and their audience, a little short.

Leading Lizard Jay Chandrasekhar, who directs their films and has the funniest role in "Beerfest," is beginning to develop a career outside the group (he directed "The Dukes of Hazzard"), and I suspect that's for the best. That's cold, I know. But there are moments when Chandrasekhar -- a big, bluff guy with a bad '70s haircut, an Indian face and a cheerful Midwestern demeanor -- seems to be in a different (and funnier) movie from the other four Lizards. As Barry Badrinath, a one-time college beer-games legend reduced to turning tricks under a railroad bridge, while wearing ludicrous red clam-diggers and huge aviator shades, he displays something of the committed self-delusion shared by all great dudely comedians, from Jim Carrey to Will Ferrell. You just wish the movie was about Barry and his so-called struggles, rather than the laborious effort to build an American team to conquer the German demons at Beerfest.

Yeah, there's a plot here, and it takes itself much too seriously for my tastes. Brothers Todd and Jan Wolfhouse (played by the two clean-cut Lizards, Erik Stolhanske and Paul Soter) head back to the ancestral homeland to spread their German-born grandfather's ashes, and stumble on the dark and indeed rather confusing secrets of Beerfest. Turns out their beloved granddad was a bastard child, his mom, their still-living Great Gam-Gam (Cloris Leachman), was employed in the world's oldest profession, and their cousins, the sinister von Wolfhausens, are determined to a) demolish them in the hallowed beer-pong and quarters competitions of Beerfest and b) retrieve the family's missing beer recipe, which emigrated with granddad.

Sent home humiliated, Todd and Jan seek to reunite their band of college drinking buddies, who have all drifted on to less momentous things like work and family life. Besides Chandrasekhar's Barry, these include fellow Lizards Steve Lemme, as science-geek Fink, and Kevin Heffernan as a crewcutted meathead known as Landfill, who has done three years in prison and become a Black Muslim. (Just one of the many potentially great gags in "Beerfest" that gets totally dropped.) You can feel this plot edging uncomfortably close to "Old School," can't you? That's probably why we learn nearly nothing about these guys' non-beer-related lives, which is both a structural weakness and a loss of much possible material.

Hey, there's plenty of yuks along the way, from watching Cloris Leachman do horrible things with a 9-inch German bratwurst (she's a terrific sport in this terrible part), to the nightmarish Fellini underworld that lies along the hidden path to the gates of Beerfest. But roughly 66 percent of this movie is either gags involving those lederhosen and those bad German accents or a cliché-ridden sports movie where the sport in question involves porky guys drinking massive amounts of beer.

Now, while I have been known to enjoy a cold, frosty one, I can't claim ever to have belonged to the quarters 'n' pong demographic. (Some of the games played at Beerfest I've never even seen before.) Possibly "Beerfest" will speak to the collective psyche of American manhood in a way that is simply beyond me. But if the Lizardmen are really going to pick up the fallen mantle of Cheech & Chong and make "Potfest" (potentially starring Willie Nelson), as promised, then I eagerly await their return. What's that smell, you ask? No, it's not the smell of skunky German beer or ropy Jamaican weed, or even of mediocre raunchy comedy. It's the smell of freedom.