Has hip-hop's once unstoppable juggernaut finally chugged to a halt? 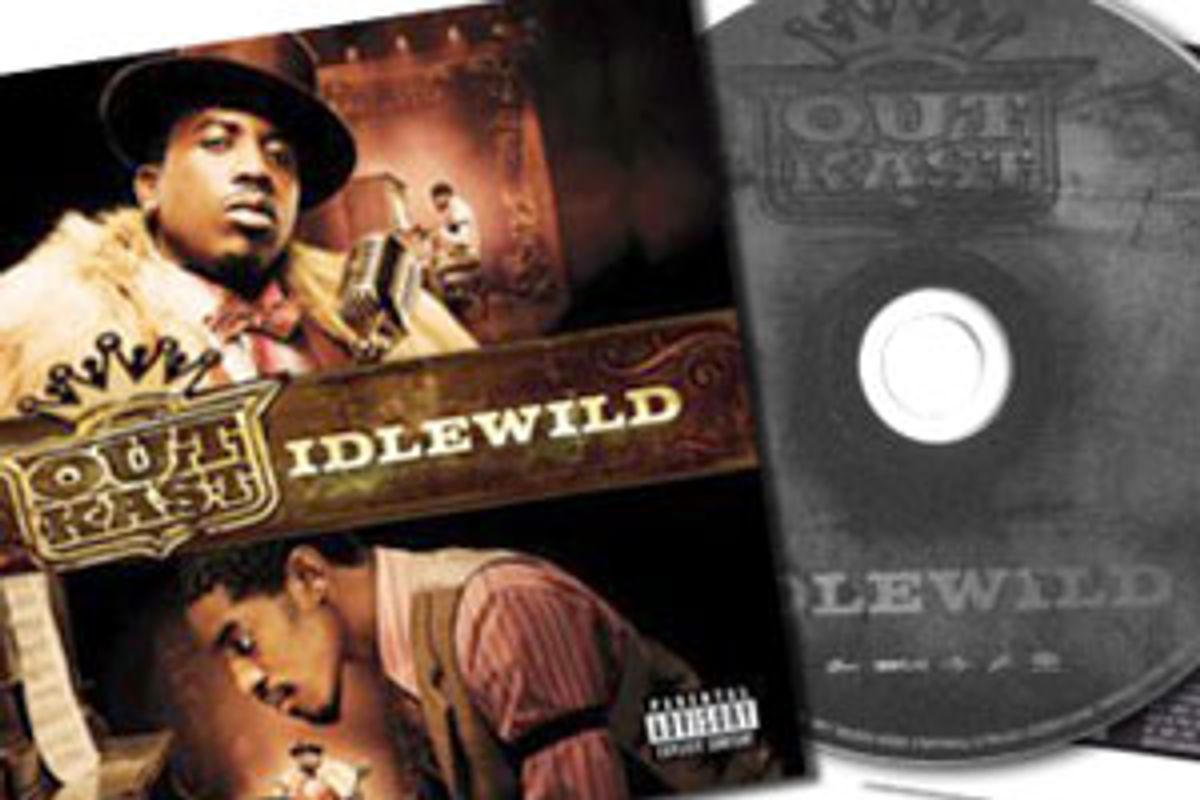 Ever since OutKast came out of Atlanta 12 years ago, hip-hop's beloved duo has been riding one long wave of critical adulation and popular acclaim, each album outselling the last, each album taking a legitimate artistic step forward, and each album confounding expectations. But now, with the tepid and unadventurous "Idlewild," Antwan "Big Boi" Patton and Andre 3000 (né Benjamin) have done the last thing anyone expected: delivered their first dud.

Released alongside the film of the same name, the '30s-era jazz-tinged record finds the two unable -- or in Andre's case, seemingly unwilling -- to come up with anything near the across-the-board unstoppability of "Hey Ya," soulful depth of "Ms. Jackson" or breezy charm of "The Way You Move." And if the nagging breakup rumors indeed come true, "Idlewild" would end up as more than just a misstep -- it would stand as the feeble goodbye of an act that, at its best, made music at a level on par with such as maverick geniuses as George Clinton and Prince.

With the release of its debut back in 1994 -- when Southern hip-hop was still seen as a mere country cousin to the East and West Coast scenes -- OutKast scored right off the bat. "Southernplayalisticadillacmuzik" reached No. 20 on the Billboard charts on the back of the hit single "Player's Ball" -- a lolling, infectious track that tied Big Boi's quicksilver, gangsta-influenced delivery to Andre's boho-rap sensitivity and slathered it all with greasy Southern funk. Not even out of their teens, OutKast effectively kick-started Southern rap's rise to preeminence.

Maybe they'd gotten hold of some stronger herb, but whatever the cause, 1996's "ATLiens" was an eerie, cosmic, quantum leap forward. Recorded mainly with live instruments, the spacey, hypnotic album charted at No. 2 and, as they rapped on "Extraterrestrial," positioned BB and A3K as forces of nature, "like hailstorms and blizzards in the middle of spring." With a hypersyllabic vocabulary, outer-space imagery and disregard for boundaries, the band placed itself as heirs to the tradition of George Clinton's space-obsessed Parliament-Funkadelic and the genre-defying Prince, artists with enough talent and vision to make the mainstream come to them.

Which is what began to happen with 1998's 2-million-selling "Aquemini." That album, which combined the gritty funk of the first record with the smoky haze of the second, both confirmed OutKast's awareness of its place in a musical tradition and demonstrated its willingness to plunder that tradition for all it was worth. That simultaneous reverence and irreverence helped separate OutKast from the rest of the millennial rap royalty. Yes, Jay-Z sampled old soul tunes, Dr. Dre was equally indebted to P-Funk, and Kanye West rhymed over richly orchestrated rap symphonies, but nobody pulled disparate elements together as successfully as Andre and Big Boi. Their first unequivocal masterpiece, "Aquemini" (a melding of the duo's astrological signs) showcased the new stars pulling off back-porch funk ("Rosa Parks"), rapid-fire psychedelic riffing ("Chonkyfire"), reggae-inflected nightclub anthropology ("SpottieOttieDopalicious"), electronic madness (the George Clinton-guesting "Synthesizer") and awe-inspiring mic skills ("Da Art of Storytellin' Parts I and II") with an unmatched sense of cultural certainty and virtuoso creativity.

If "Aquemini" marked the arrival of a major talent, "Stankonia" (2000) was the sound of that talent in full bloom. "Ms. Jackson," an empathetic, regretful and impossibly catchy song about a child born out of wedlock, gave the band its first No. 1 single and won a Grammy for best rap song, but it was just one part of a larger, even more impressive whole. "B.O.B. (Bombs Over Baghdad)" was a vicious, electro-fueled Middle Eastern scorcher; "Gasoline Dreams" exploded with righteous indignation of the kind Public Enemy used to wield; and as if it were necessary, "So Fresh, So Clean" claimed that the two longtime friends were "cooler than Freddie Jackson sippin' a milkshake in a snowstorm." Four times platinum and a Grammy winner for rap album of the year, "Stankonia" established OutKast as pop music's most forward-thinking superstars and the hip-hop act everyone could love.

2003's double-disc "Speakerboxxx/The Love Below," doubled "Stankonia's" sales and won the Grammy for album of the year. But while the album was hailed as OutKast's greatest moment, it also signaled that things had changed: Andre was now espousing his love of jazz and saying he was bored with rapping, but Big Boi only wanted to keep pumping out the slickly creative, radio-ready jams he did so well. The tension between Andre's avant-garde urges and Big Boi's populist impulses became apparent through the eventual shape of the record: essentially two jointly released solo efforts, "Speakerboxxx/The Love Below" was an OutKast album in name only, with actual collaboration between the two cut to a bare minimum.

"Speakerboxxx" was the better received of the two discs, a highly entertaining mix of sultry Southern rap that left most of the competition in the dust. But the frisson, the spark, was missing. Big Boi does what he does better than just about anyone else, but even that couldn't quite compensate for the absence of his more glamorous and creatively restless partner. At least Big Boi was consistent, which couldn't be said of Andre. "The Love Below" turned out to be a rambling and unfocused bout of intermittently inspired lunacy. The inescapable acoustic soul and paisley heart of "Hey Ya" helped obscure the fact that much of "The Love Below" was aimlessly self-indulgent goop. Experimentation, not pop, had become Andre's favored métier, but he viewed experimentation as a means, not an end. When Coltrane extended "My Favorite Things" into an endless series of snake-charmer improvisations, it was part of a concentrated effort to achieve religious ecstasy through music. When Andre recast the same tune as a drum and bass techno workout, he did it only because he could, with appropriately eye-glazing results. As if Andre's new devotion to an unsteady muse weren't frustrating enough, his decision to abandon rapping (one of the best MCs of his era, he now raps only sporadically) for off-key crooning was akin to Hendrix trading in his guitar for a ukulele. It became plainly obvious that, having reached undreamed of levels of artistic and popular success (and still under 30), Andre's only obligation was to his whims.

Which brings us to "Idlewild." If "Speakerboxxx/The Love Below" was OutKast's version of the Beatles' "White Album," with its utter lack of collaboration serving as an aural harbinger of that band's eventual split, then "Idlewild" scans like one of those overlong and ignored Prince albums from the mid-'90s -- a small handful of gems (the hard-swinging "Call the Law," "The Train's" gorgeous nostalgia) weighed down by serviceable genre exercises (the bored bedroom throb of "N2U") and navel-gazing experimentation (the accurately titled and helium-voiced "Makes No Sense At All").

Continuing the near-total estrangement that began on "Speakerboxxx/The Love Below," Andre and Big Boi appear together on just four of the album's 25 tracks. Of those, "Mighty O" is the best, with a catchy Cab Calloway sample, but it certainly doesn't thrill like the band's past hits. On the solo tunes, Andre seems content to croon tunelessly over almost aggressively uninteresting walking bass lines and atonal piano tinkles. "Hollywood Divorce," featuring Snoop Dogg and Lil' Wayne, is an exception, and it's also one of the few tracks Andre deigns to rap on. Even when he manages to hit upon something affecting, like the sorrowful gospel of "Dyin' to Live," he cuts it short, as if he isn't able to sit on an idea long enough to develop it. Big Boi contributes his usual handful of seductive grooves, some attractively garnished with stride piano licks and torchy singing ("Call the Law"), others, like "In Your Dreams," merely reiterating past glories.

If the album had been a total mess, it might have given us something to think about, lent the impression the band was shooting for something greater. But with minor exceptions, "Idlewild" mostly just sits there, neither good enough to inspire nor bad enough to offend. It's somehow appropriate that the album comes to a close with eight minutes of formless, completely negligible blues guitar jamming. Coming from an act responsible for arguably the most important and original popular music of the last decade, "Idlewild's" pure inconsequentiality is a grave portent for OutKast's future. If only they'd released an ambitious disaster.

Last year's wildly entertaining "Big Boi Presents... Got Purp? Vol. 2" suggested that Big Boi might no longer derive any benefit from having his contemporary hit-making skills tethered to Andre's more far-flung desires. Away from OutKast, Big Boi could get down to the business of booty shaking. Andre might also benefit from a dissolution; freed from the expectations accompanying OutKast projects, he could set about making the far-out soul jazz hip-hop record he clearly wants to make. But guesswork is ultimately useless when it comes to OutKast, because if there's one thing Andre 3000 and Big Boi have proved over the course of 12 years and six albums, it's that no one knows what the hell they'll do next.