And the Buffy goes to...

Our third annual award to the most underappreciated show in all of TV land. 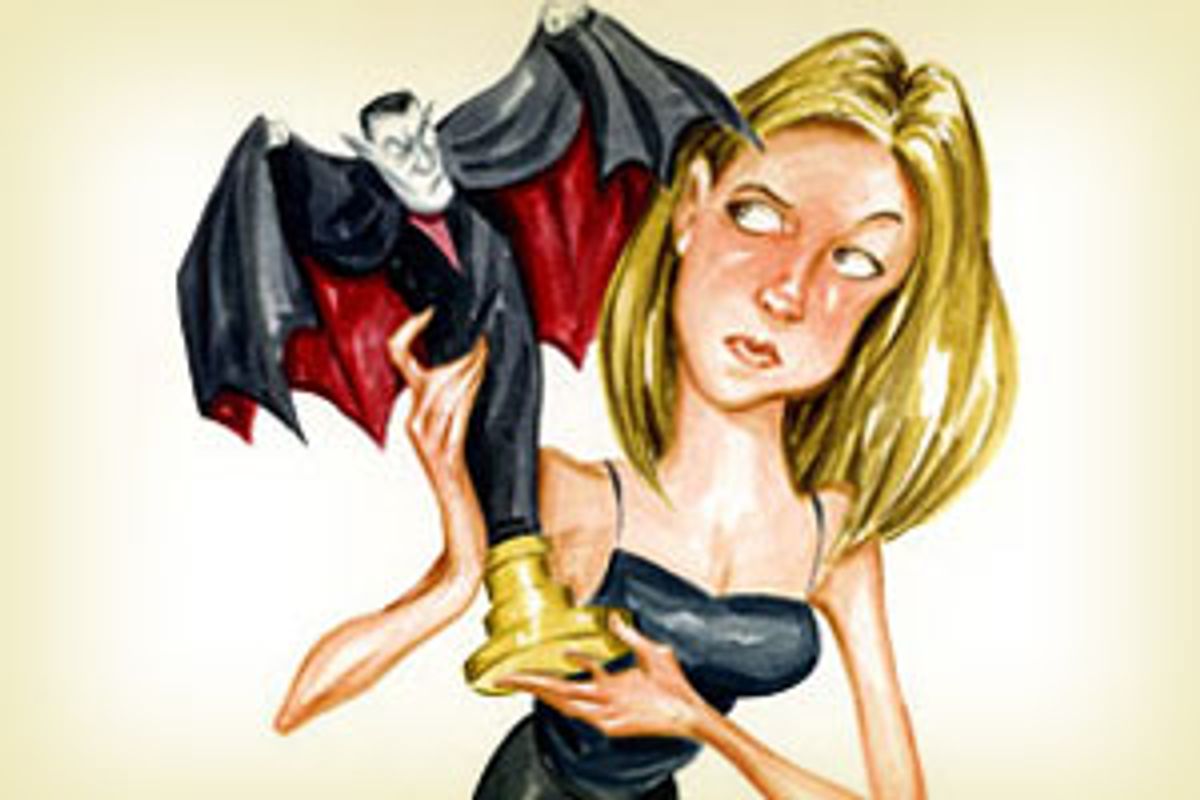 This year's Buffy, an annual token of our deep and abiding love for a relatively underappreciated TV show, goes to ... "Battlestar Galactica"!

Which of course should come as no surprise to any loyal reader who's familiar with our paeans to the show over the past year. We've thrilled at "Battlestar's" cross-dressing, cigar-chomping heroine, marveled at its elaborate yet intuitive mythos -- where the monotheists are the killer-computer Cylons -- and cheered on its satisfyingly complex conflicts and characters. We're not sure there has ever been a show with a stronger array of fascinating female characters -- Starbuck (Katee Sackhoff)! President Roslin (Mary McDonnell)! The late, evilly great Admiral Caine (Michelle Forbes)! And while "Battlestar" is technically a science fiction show, it's blessedly free of the genre's lazy kitsch; there's not one damn Wookie or Ewok or any other variety of Furry in sight.

Many of you are already fans. Some of you urged us to watch the show at the very beginning. We know you'll clutch this golden Buffy to your bosom with pride. But others of you -- and we're addressing you, Emmy voters, directly here -- ignore us like the petulant little pills you are. Having never watched a single episode of "Battlestar," you picture bad fight scenes on cheap green screens with fake laser beams. You think "Battlestar" is some anti-Republican thing, and you think awards shouldn't reward politics (silly, silly you). Sure, that guy who pads around the office in fuzzy clogs loves the show -- and he's a geek. Plus, you saw Allison Janney at the mall once, and she seemed really nice, so you've decided to vote for "The West Wing" over and over and over again, until they pry the remote from your dead, cold hand.

So, we've decided, in the spirit of honest discourse, to try to see it your way. Maybe you're right. Maybe "Battlestar Galactica" isn't worth our time. In fact, putting ourselves in your shoes ... we begin to see things a little more clearly now. So as a counterpoint to the Buffy, we give you the following:

2. The gripping, conflicted experiment with democracy aboard Galactica seems too unrealistic. Politicians make good decisions and elections are always fair!

4. The personal crises on the show -- breast cancer, loss of loved ones, the brutal disillusionment of loving someone you can never have -- are unbelievable. They live on a spaceship! Now, if they lived on Wisteria Lane ...

5. I don't want a President Roslin, with her clear-eyed pragmatism and steely political instincts, when I can have the portentous speechifying of President Bartlet!

6. A woman president? Come on, it's already science fiction, why tip over into the realm of fantasy like "Commander-in-Chief"?

8. There's too much realistic adventure and too many pulse-racing fight scenes; I don't like to get that excited.

10. I like my science fiction peopled with multi-nostriled characters sporting thick, blue, leathery skin. Too many of the "Battlestar Galactica" characters are preposterously hot, and stubbornly refuse to ooze green, viscous liquids. Who wants that?