As he travels the nation to commemorate Katrina and 9/11, the president is only highlighting the tragedy of his own incompetence. 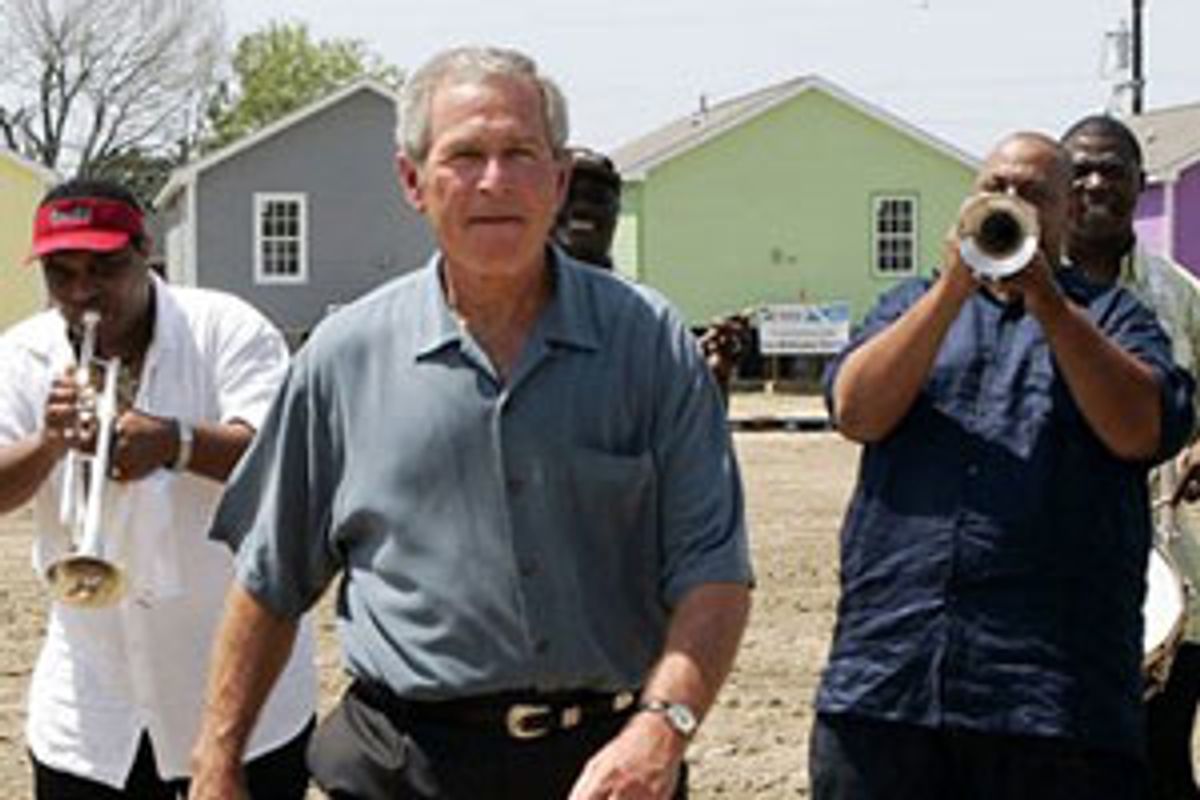 President Bush declared a National Day of Remembrance on Aug. 29, the day of Hurricane Katrina's landfall -- not on Sept. 2, the day the federal government finally responded to the disaster. He has begun commemorating highlights of his presidency as though he were a guide leading visitors through the wonders of the George W. Bush Presidential Library. His dissociation is one element in the continuity of his methods.

The population of New Orleans is about half of the 455,000 it was when the storm hit, reduced to the size it was in 1880. Here the Bush administration has built a bridge to the 19th century. Along the Mississippi coast, fewer than 5 percent of the wrecked homes are being rebuilt. The $17 billion in federal community development block grants has only now slowly begun trickling in. Little of it will go to low-income homeowners and none to renters, who constitute about half of those displaced.

On his Remembrance tour, his 13th visit to the region since Katrina, Bush arrived first, on Monday, in Mississippi. "It's a sense of renewal here," he proclaimed, gesturing out at the beach. "You know, each visit, you see progress. I was struck by the beauty of the beaches. The beaches were pretty rough after the storm, as you know. Today they are pristine and they're beautiful. They reflect a hopeful future, as far as I'm concerned."

The next day he came to New Orleans to herald "progress." "We're addressing what went wrong," he declared in a voice that quickly trailed from bravado into passivity. Later he perked up, after calling the storm "biblical," offering his own King James version of Katrina rebuilding: "There will be a momentum, a momentum will be gathered. Houses will begat jobs, jobs will begat houses."

Katrina week is an ordeal he must weather before 9/11 week, which will begat the Republicans' midterm elections campaign. Even on the day Bush was obliged to stage what appears will be his annual Groundhog Day in New Orleans until the end of his term, Secretary of Defense Donald Rumsfeld previewed the fall season's political line. At the American Legion convention, he attacked "some who argue for tossing in the towel ... some seem not to have learned history's lessons ... quitters ... the Blame America First mentality." In Iraq, and everywhere else for that matter, "fascists" are the enemy, failure to support the administration is appeasement, and the press is subverting the struggle by reporting stories like those about torture at Abu Ghraib.

Rumsfeld did not mention the clash the day before between units of the Iraqi army and Muqtada al-Sadr's Mahdi army (Sadr is Prime Minister Nouri al-Maliki's most important political ally), in which 28 were killed, including an Iraqi general and more than a dozen soldiers, beheaded in a town square after they ran out of ammunition. In July, Rumsfeld had ridiculed the notion that sectarian strife in Iraq bears any resemblance to civil war. "If you think of our Civil War, this is really very different," he said. The metrics would seem to be satisfied when large-scale military units battle, but Rumsfeld retreated from bloody facts on the ground to higher rhetoric. "Can we truly afford to believe that, somehow or someway, vicious extremists could be appeased?" he charged, and went on without describing the "vicious extremists" (Muqtada al-Sadr?), except as "fascists."

Making his escape from New Orleans, Bush laid preparations for a Churchillian reenactment during the upcoming 9/11 week. In his press conference last week Bush had upset his past innuendoes by conceding that the relationship of Saddam Hussein to the terrorist attacks of 9/11 was "nothing." But in an interview with NBC News anchor Brian Williams on Tuesday, Bush scrambled to repackage his all-inclusive unified field theory. "They -- they weren't -- no, I agree, they weren't Iraqis, nor did I ever say Iraq ordered that attack, but they're a part of -- Iraq is part of the struggle against the terrorists ... I personally do not believe that Saddam Hussein picked up the phone and said, 'al-Qaida, attack America.'" Thus Bush remembered a story no one had ever suggested before he did in his interview; and in refuting his own concocted tale he hinted once again at dark liaisons between Saddam and al- Qaida.

Bush could hardly wait to put remembrance of Katrina behind him. He rushed to the American Legion convention on Thursday to begin a series of speeches on the stakes in the war on terror and Iraq that will climax with his commemoration of Sept. 11. Framed by the tragic date, Bush hopes to recapture his image as the president holding the bullhorn while standing on the rubble of the World Trade Center. His idea of memory is the erasure of almost everything that has followed his heroic moment. He wishes to remember the past so long as most of it is forgotten.

Bush's remembrances of 9/11 only point to the opportunities that he has squandered. When he stood on the ruins of the World Trade Center virtually the whole world had declared its solidarity with the United States, al-Qaida had lost almost all sympathy throughout Muslim communities, and even Syria and Iran offered to help the United States destroy the terrorist threat. Now Bush stands on the rubble of his policy and reminds us by his presence what he has not built.

Even the recent indictments in London of members of a terrorist ring there, achieved through effective law enforcement techniques, underline Bush's continued denigration of law enforcement and the rule of law and militarization of policy. The London plot also glaringly but silently carries the suggested possibility that 9/11 might well have been preventable.

Five years later, the Day of Remembrance for Sept. 11 should properly begin on Aug. 6 to recall the Presidential Daily Briefing that Bush received in 2001, titled "Bin Laden Determined to Strike in US," which he ignored, dismissing his CIA briefer: "Well, you've covered your ass now." Before then, the administration had shunted aside the terrorist issue as something tainted by association with Bill Clinton. Counterterrorism chief Richard Clarke was ignored and demoted, pushed off the National Security Council Principals Committee. Despite Clarke's urgent entreaties the Principals Committee discussed terrorism only once, deciding at Rumsfeld's behest not to fly Predator drones for surveillance over Osama bin Laden's camps in Afghanistan. Bush's final dismissal of the threat warning on Aug. 6 meant that the CIA and FBI and other agencies were under no pressure from above to coordinate or even to be on the alert for terrorist plots.

In the aftermath of the derelict approach before 9/11, incompetent bungling has been compounded. By now the history is all too sadly familiar: allowing bin Laden to escape at Tora Bora by failing to commit U.S. troops; draining personnel and resources from Afghanistan in the run-up to the invasion of Iraq; contempt for our alliances and disregard of world opinion; and the incredible accumulation of blunders in Iraq that have produced the present and ever-widening crisis, which has restored and sustained prestige for terrorism from Baghdad to London, constantly replenishing a potential reservoir of able and willing terrorists. To that extent, Bush has transformed his initially false conflation of Iraq and terror into a fact, though terror has become a more universal tactic than he allows, deployed in Iraq by Shiite militias (sometimes operating as police or army) and Sunni insurgents alike.

On the day Bush visited New Orleans, Attorney General Alberto Gonzales appeared in Baghdad to meet with Iraqi officials on detainee and interrogation policy. As White House counsel, Gonzales had notoriously referred to the Geneva Conventions on torture as "quaint" and helped preside over Bush's abrogation of them. He has also overseen Bush's policy of appending signing statements to bills enacted by Congress, declaring that the president alone will decide which laws and parts of laws he will enforce or not enforce -- including those regarding torture techniques -- a general policy that the American Bar Association last month stated was "contrary to the rule of law." On Wednesday, in Baghdad's Green Zone, Gonzales memorably explained the limits of permissible methods of torture: "It's difficult to decide what is appropriate and what is allowed under law."

Bush's ratcheting up of his ahistorical analogies since "mission accomplished" in Iraq has always been in inverse relationship to crises produced by his absence of strategy. Rumsfeld's phantasmagorical séance summoning the specters of Adolf Hitler and Neville Chamberlain, apart from the transparency of his deluded grandiosity, should also be understood as the deliberate substitution of fever for strategy. With the Bush administration, the more heated the rhetoric, the emptier the policy.

Each disaster of Bush's presidency triggers remembrance of another. Bush's neglectful behavior before Katrina recalls his studious indifference to terrorism on the eve of 9/11. His refusal to respond to the briefing by Max Mayfield, director of the National Hurricane Center, that the levees would likely be breached eerily repeated his administration's dismissive attitude toward Clarke's warnings and the Aug. 6 PDB on bin Laden. From 9/11 to Katrina, the pattern, we can now recall, is remarkably consistent.

Remembrance of Bush's fiascoes does not overshadow the reality that they are not sealed in the past but are continuing catastrophes. As new failures unfold, the old ones appear in their refracted light. Memories of Bush's damage acquire deeper meanings with each new calamity.

Consider: In the New Orleans black community of the Lower 9th Ward, only 200 of its original 14,400 residents have returned to their blasted homes. Though statistics are unavailable, it is likely that Hezbollah has already rebuilt more homes in southern Lebanon than Bush has a year after Katrina in the Lower 9th Ward.