A popular incumbent governor persuades social moderates alienated by fights over abortion and Darwin to quit the GOP and run for office as Democrats. 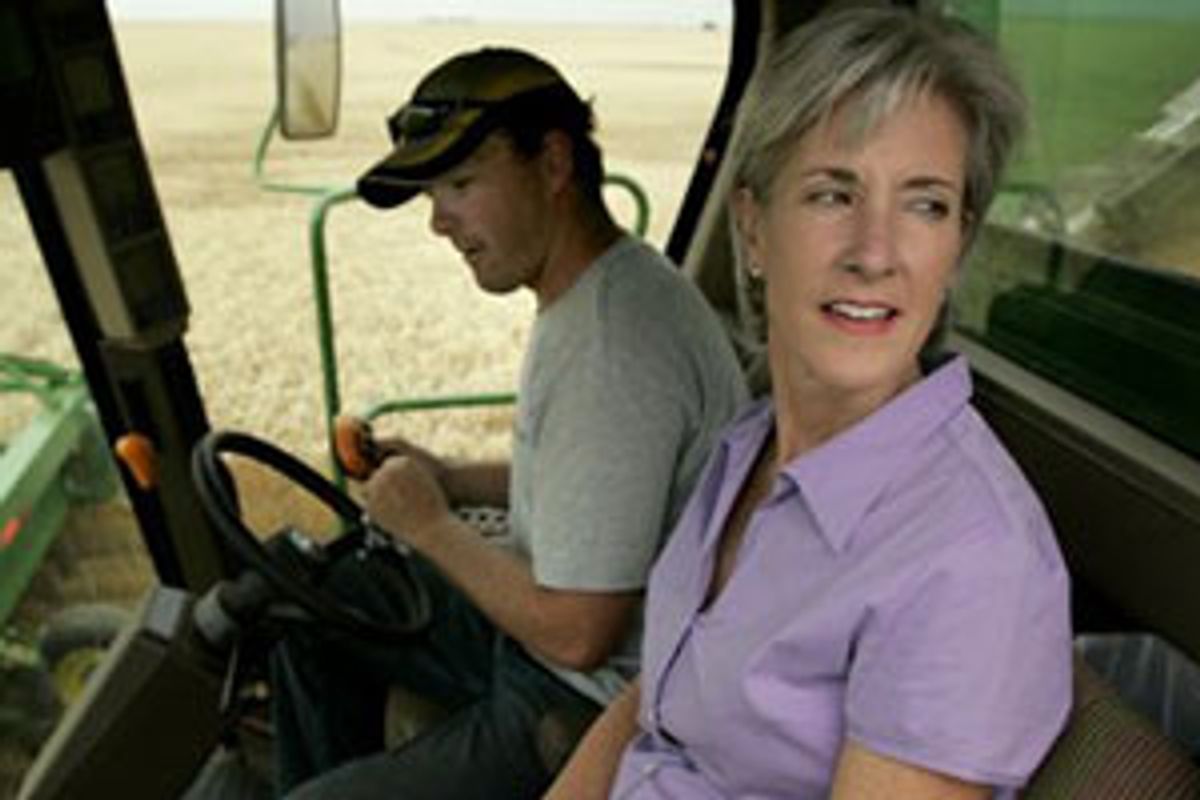 On the last Sunday night in May, Mark Parkinson and his wife, Stacy, asked two of their best friends out to dinner at a country club in Cedar Creek, an exclusive planned community in the upscale Kansas suburbs southwest of Kansas City. They met Paul and Joyce Morrison in a private windowless room at the Shadow Glen golf course clubhouse because Mark had a secret he wanted to share with the other couple, something he needed the Morrisons to keep to themselves for 72 hours.

Parkinson, the chairman of the Kansas Republican Party from 1999 to 2003, was planning to come out of the closet that Wednesday -- as a Democrat. At the request of incumbent Kansas governor Kathleen Sebelius, a Democrat, Parkinson would be switching his party registration and running as the Democratic candidate for lieutenant governor.

As Parkinson remembers it, the Morrisons weren't shocked. The couples had been close for 20 years, close enough that Morrison was godfather to Parkinson's oldest child, and in recent years their private conversations had often turned to their growing disenchantment with the conservative direction of the state GOP.

"There's been a long series of Republican infighting over issues that do not affect people's daily lives," Parkinson explains. "I'm 49. I got tired of fighting about whether Charles Darwin was right when I was 14 or 15. I'm not spending the rest of my life on that issue."

Besides, just a few months before, Parkinson had been part of Sebelius' successful push to get Paul Morrison, a fellow moderate and the four-term district attorney of Johnson County, to ditch the GOP and run for state attorney general as a Democrat.

Moderates and social conservatives have been battling for the soul of the Kansas GOP since 1994, when the conservatives first won control of the party machinery. Although registered Republicans outnumber Democrats 2 to 1, Kathleen Sebelius is about to exploit that ideological schism to win a second term by a comfortable margin. In 2002, she beat a conservative Republican nominee by appealing to voters who care more about schools and taxes than abortion and evolution -- and by recruiting a centrist Republican to run as her lieutenant governor. Four years later, Sebelius has again tapped a moderate Republican as her running mate, and this time eight other party-switchers will join her on the Democratic ticket. Depending on whom you believe, in her cross-the-aisle raids Sebelius has either found an effective strategy for turning Kansas a little less red, or she has used her personal popularity to mask the slow decline of her party.

Via e-mail, because she says her cellphone isn't working while she's on the road in rural Kansas, Sebelius explains her recruitment drive with a well-worn laugh line about her mate of 30 years: "I'm converting Republicans one at a time. First my husband, Gary..."

Sebelius, who rarely misses a chance to stress cooperation and compromise, doesn't like to sound aggressive. "I joke that it's my strategy, but quite frankly it's nothing I set out to do. It's just worked out that way in some cases. I'm happy to work with anyone who has a good idea to move Kansas forward, regardless of party labels."

Clearly, however, it is a strategy. Every Republican who switched parties did so after talking by phone or in person with Sebelius.

The roots of the strategy that dares not say its name lie in the huge numeric disadvantage Democrats have long faced in Kansas. It's a matter of practical necessity, says outgoing lieutenant governor (and former Republican) John Moore. "When we took office, we had ten of 40 Senate seats that were Democratic," he says, "and 42 or 43 of 125 seats in the House of Representatives." Democrats can't pass bills -- or win elections -- without Republican votes.

In 2002, only John Moore switched affiliation. As GOP state chairman in 2002, Parkinson called Sebelius' decision to pick Moore as her running mate a gimmick and proclaimed, "Any Republican who supports Kathleen Sebelius for governor is either insincere or uninformed." Four years later, when Parkinson announced that he would be the governor's new running mate, Republicans printed up fliers that featured his "gimmick" sound bite and papered the windshields of cars outside the building where he made the announcement.

Parkinson shrugs off his embarrassing quote. "I thought she was doing it as a stunt," he says. "What she has done over the last four years is run the government in an open and independent way ... She has appointed Republicans, Democrats, independents, to posts all over the state. It was not a one-shot deal to get elected, but it was her demonstrating a new way of leadership. As so often is the case, I was wrong."

This year, the number of switchers has become an honest-to-God trickle. Besides Parkinson and Morrison and secretary of state candidate David Haley, a Republican who became a Democrat in 1992, six former Republicans are seeking House seats as Democrats. A seventh former Republican running for the House lost in the Democratic primary.

Though Sebelius did contact all these newly minted Democrats, she seems to have gotten many of their phone numbers from Larry Gates, the plainspoken chairman of the Democratic Party in Kansas. Gates is a lawyer in Johnson County, just like Morrison and Parkinson. Gates knew Parkinson and Morrison socially before any issue of party switching arose. Gates also sensed that other moderate Republicans weren't happy with the direction of their party.

Gates casts the raids on GOP membership in terms of bipartisanship, following Sebelius' script, but also mentions the intimacy of Kansas politics. "You can say publicly that you're trying to reach across party lines to solve problems, and we are, but to do it on a more personal basis is when you start getting results," he says. "So we talked to all those folks, and every time I thought that someone was interested in perhaps doing it, I certainly picked up the phone and called up the governor, and the governor was very interested and excited to call anyone we asked her to call."

All along, however, Sebelius and Gates have been abetted by the social conservatives who dominate the Kansas Republican Party. When conservative Republicans won seats on the state school board, for example, and changed the science teaching standards to include the theory of intelligent design, Kansas became a national punch line, and moderate Republicans squirmed.

Morrison, the Democratic candidate for attorney general, says that it took more than a call from Sebelius to persuade him to switch. Morrison, who calls himself a "very, very moderate person," felt that incumbent Phill Kline had turned the attorney general's office into a platform for partisan politics. Kline made headlines when he attempted to access the medical records of Kansas women who'd had abortions. "So much time and energy," Morrison says, "is being spent on pursuing a narrow partisan agenda that most people don't agree with."

For Cindy Neighbor, who's running for the state House, the decision to ditch the Republican Party came when she looked at a platform that included opposition to stem cell research and support for school vouchers and the teaching of intelligent design. "Even when they say they're a wide-open party," Neighbor laments, "it's, 'If you don't agree with us, you're not one of us.' It was about being able to have some freedom to be an individual rather than just a puppet."

Her decision also says something about the dynamics of Johnson County, from which fully half the switchers hail. Just outside Kansas City along the Missouri line, affluent, suburban and booming Johnson County now holds a half million people, fully a fifth of the state's population, and much of the state's power. Its median income is by far the highest in Kansas.

In his famous book "What's the Matter with Kansas?" -- which attempts to explain the conservative hold on the American heartland -- Thomas Frank calls his native county a "happy, humming confusion of freeways and malls and nonstop construction" and notes that a local newspaper columnist had dubbed it "Cupcake Land." "You know what it's like," writes Frank, "even though you haven't been there."

But in the midst of those planned communities lies Sebelius' strength, and it's symbolic that Parkinson and Morrison had their private meeting in a Johnson County golf club. The county is strongly Republican, but local voters are not social conservatives. "They're fiscally conservative," explains Kansas State University political science professor Joe Aistrup, "always for cutting government and cutting taxes -- except for education." Sebelius, says Aistrup, used an emphasis on education to peel off moderate Johnson County voters, and in the wealthier northern end of the county in particular, she is especially well-liked by affluent voters turned off by social conservatism. Adding two popular Johnson County politicians in Parkinson and Morrison to the ticket only increases her appeal.

Ron Freeman, a conservative and the executive director of the state's Republicans, scoffs at the notion that there is any ideological split in his party, and writes off all these brand-new Democrats as mere opportunists. "I think you might recall when Mark Parkinson switched, when Paul Morrison switched, and Cindy Neighbor switched, their comment was, 'Moderates cannot win an election in a Republican primary.' I think the whole case wasn't because they're moderate. They just felt they simply, individually, weren't electable as Republicans. These people have strong political motives more than philosophical motives."

But there is a split. The Johnson County Republicans even put up a Web site, since taken down, naming the names of the moderate Republicans In Name Only they most despised. The moderates formed their own anti-conservative group called the Kansas Traditional Republican Majority.

At the same time, says Aistrup, the addition of former Republicans may be shifting Kansas Democrats to the right. "Any time, as a party, you start expanding the base to include former members of the other party, you're recalibrating the party to a more moderate point of view."

Thomas Frank views these new Democrats with a healthy dose of skepticism. "I like to see Democrats win, and I like Kathleen Sebelius," he says. "On the other hand, I don't think it's that great a victory if people come to the Democratic Party without any kind of change of heart, or if the Democratic Party is just becoming full of moderate Republicans. Then that's, in some ways, a terrible defeat for my side, for Team Liberal."

There is certainly evidence that the Sebelius strategy has not yet made the state more Democratic. Today the Kansas House has four fewer Democrats than it did in 2002, and the number of Democratic state senators remains a dismal 10 out of 40. Both Democratic and Republican voter registrations have fallen since 2002, but the Democratic decrease is bigger.

But there are also signs of resurgence. In 2004, 39 Democrats ran for Republican-held House and Senate seats. This year, 58 Democrats are contesting Republican seats. Kansas Democratic Party leaders say that they've partnered with Howard Dean's Democratic National Committee to get more people organized at the precinct level, and to get more candidates in races. In Johnson County, the real battleground, where Republicans hold 21 out of 22 state House seats, most incumbent Republicans ran unopposed in 2002. This year, Democrats will contest all but one seat.

Mark Parkinson says the real change is behind closed doors, at least in Shadow Glen and the swanker precincts of Cupcake Land. "Unless you're running for office, there's no reason to go down to the courthouse and change your voter registration. I talk to people every day who are registered Republicans but tend to support Kathleen and Paul, they just don't have any reason to go down and change their registration." "A lot of people," Parkinson insists, "have switched mentally."