Bush's confession that the CIA has been secretly holding prisoners is a cynical move to boost Republicans in the polls. 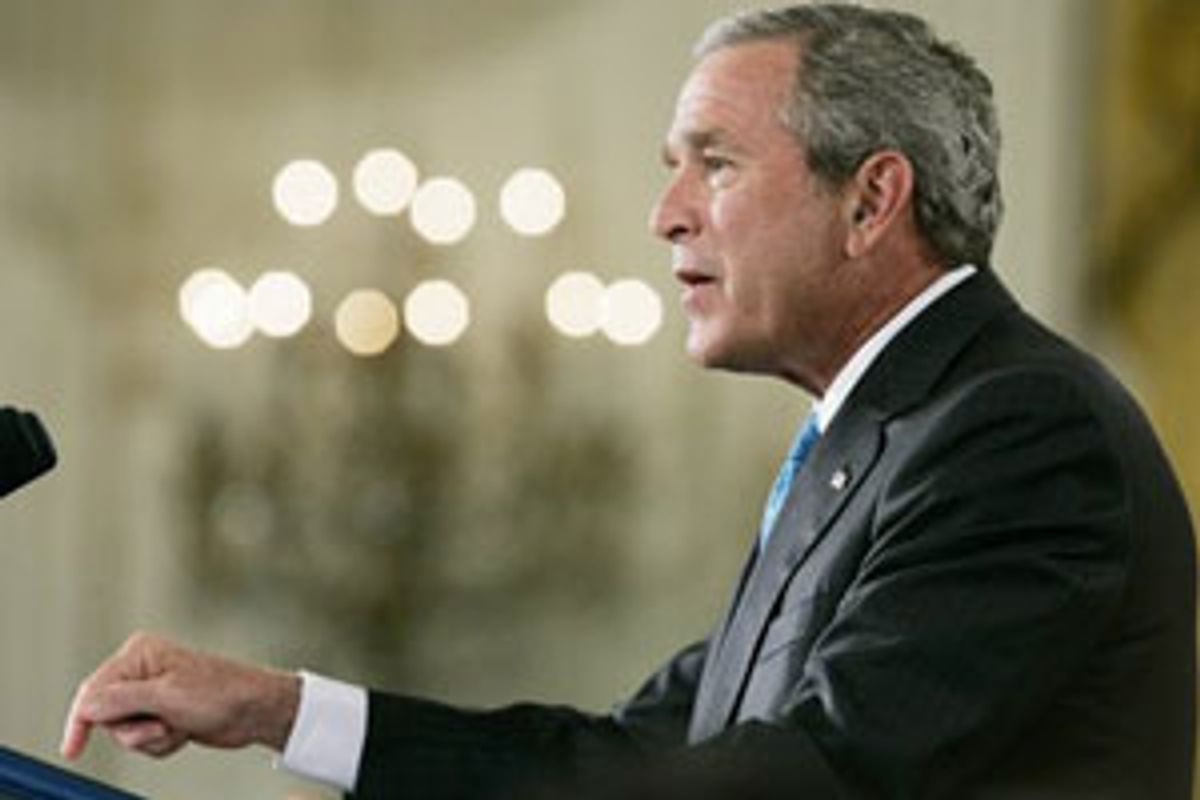 President Bush acknowledged on Wednesday, for the first time, that the CIA has been holding top al-Qaida prisoners, including Khalid Sheik Mohammed, in secret prisons. Bush announced that 14 such prisoners would be transferred to the Pentagon's custody at Guantánamo Bay, Cuba. The president also said that those prisoners would be tried before a military commission and, consistent with a Supreme Court ruling in July, would be afforded the protections of the Geneva Conventions.

This announcement may appear superficially to constitute a reversal, or even a capitulation, by the Bush administration, but there are significant political benefits to be gained from the White House's maneuver, including election-season pressure on lawmakers to support policies the administration has pursued all along for the "war on terror."

Last November, reporter Dana Priest revealed in the Washington Post that the Bush administration has "been hiding and interrogating some of its most important al-Qaida captives" in secret CIA-operated prisons, known as "black sites," located in Eastern Europe and elsewhere around the globe. Shortly thereafter, ABC News reported that one of those prisoners was Mohammed, the al-Qaida member who the Bush administration claims was the "mastermind" of 9/11. ABC also reported that in one of the black sites, Mohammed was subjected to "waterboarding," a practice the White House describes as an "enhanced interrogation technique" but that many human rights advocates consider to be a form of torture.

Although the Bush administration refused to confirm or deny Priest's story, it has claimed generally since 9/11 that members of al-Qaida are not prisoners of war, but instead are "enemy combatants," and therefore are entitled to no protections under the Geneva Conventions. That theory would legally justify secret detentions or any other treatment of al-Qaida detainees. But in July, the U.S. Supreme Court rejected that claim in Hamdan v. Rumsfeld, ruling that the Geneva Conventions apply to all detainees, including al-Qaida members. That ruling forced the administration's hand with regard to the CIA's "black sites," as it would be illegal under Hamdan to continue to hold detainees in secret prisons beyond the reach of the law.

Republican strategists have made explicitly clear that their strategy for the midterm elections, now just two months away, is to highlight the terrorist threat to the fullest extent possible. Accordingly, top Bush officials, including the president, have spent the last week giving a series of extraordinary speeches about terrorism, featuring highly charged accusations of "appeasement," along with escalated rhetoric equating the threat from al-Qaida to that posed by the Nazis during World War II and by Communists under Lenin and Stalin. Republicans clearly want the news dominated by alarming discussions of the terrorist threat, as opposed to the highly unpopular war in Iraq, which has receded from view in recent weeks despite continued grim developments.

Publicly showcasing the most dangerous and prized al-Qaida suspects, as the White House did Wednesday, has already provoked exactly the visceral reminders of the 9/11 attacks that the administration believes will provide it the most political punch. As the so-called 9/11 mastermind, Khalid Sheik Mohammed is one of the best-known and most ominous terrorists of all. Virtually every news Web site and cable news program is now repeatedly displaying the photograph of a bedraggled, angry Mohammed, taken after he was dragged out of bed in Pakistan in the middle of the night and detained by American soldiers in March 2003. Short of capturing Osama bin Laden, it is difficult to imagine what could bolster the administration's political objectives more than having such a vivid and alarming image associated with the 9/11 attacks once again filling television and computer screens everywhere.

The transfer of these detainees to Guantánamo is also certain to provide the administration with a powerful new weapon as Congress debates various legislative proposals designed to regulate military commissions and interrogation techniques in the wake of the Hamdan ruling. The Bush administration is insisting that Congress do nothing more than simply endorse, legislatively, the military commissions that the administration already created. The administration is also seeking authorization for the CIA to employ controversial interrogation techniques such as prolonged sleep deprivation and waterboarding -- a policy Vice President Cheney in particular has fought for fiercely on Capitol Hill.

But numerous lawmakers, including top Republican senators such as Lindsey Graham and John McCain, are insisting that additional due process safeguards be provided to detainees. They include the right for detainees to be present for the proceedings, the right to have access to the evidence against them, and the banning of statements from detainees obtained under coercion (techniques such as waterboarding). And the Senate has previously made clear its opposition to use by the CIA of the more extreme "coercive" tactics for which the administration is seeking authorization.

In the past, the administration has depicted such efforts to protect fundamental principles of due process as "giving rights to terrorists." By announcing that Mohammed himself is now to be one of the detainees to be tried before a Guantánamo tribunal, the administration is sure to argue that the "mastermind" of the 9/11 attacks does not deserve such privilege. Particularly for those in Congress facing tough reelection battles, the prospect of being depicted as an advocate for Khalid Sheik Mohammed is sure to give them pause when deciding if they will insist on greater safeguards for Guantánamo detainees.

Unsurprisingly, the White House has chosen the ideal time to politically pressure Congress in hopes of regaining some of the ground it lost in the watershed Hamdan decision. That ruling forced an end to its policy of holding detainees at "black sites." By announcing the transfer of these detainees to Guantánamo for trials before a military commission, the administration advances its political objective of highlighting terrorism, and simultaneously makes it much more difficult for Congress to defy its wishes in the legislative battle over Guantánamo.