Like Karen Hughes and Harriet Miers, Condi Rice dotes on her boss and shields him from critics. Meanwhile, the State Department suffers neglect. 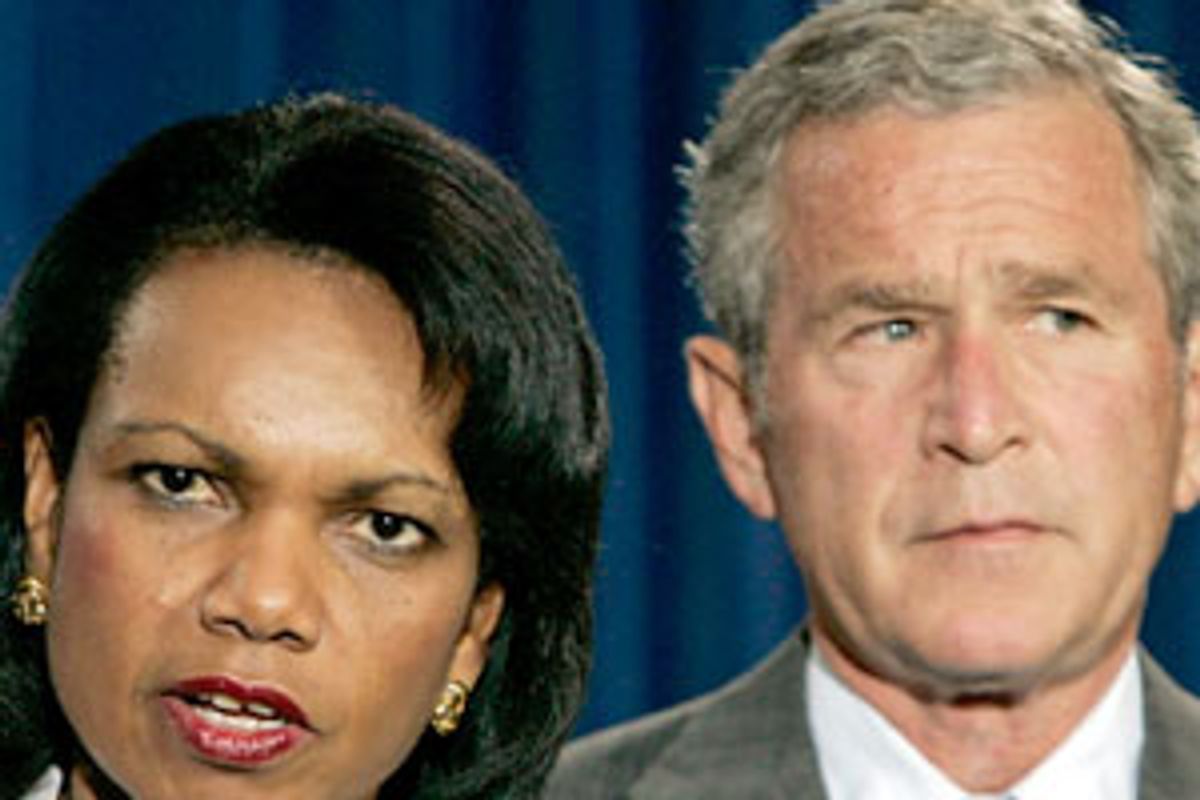 About two weeks after the 2004 presidential election, on Nov. 13, the British Embassy in Washington held a surprise 50th birthday party for Condoleezza Rice. Upon her arrival ambassador David Manning presented her with a red Oscar de la Renta-designed gown for which the embassy staff had managed to secure the "state secret" of her size. When Rice changed into the dress and emerged like Cinderella she was met by her Prince Charming, dressed in a tuxedo, the man she once called "my husband," President Bush.

At the State Department's senior policy meeting the following Monday, an official remarked about the red dress, "It gives new meaning to 'they have your number.'" The next day Bush announced his appointment of his national security advisor as his new secretary of state.

Bush's relationship with Rice is perhaps the strangest of his many strange relationships. The mysterious attachment involves complex transactions of noblesse oblige and deference, ignorance and adulation, vulnerability and sweet talk. Like his other female enablers, Karen Hughes, his political image-maker and undersecretary of state for public diplomacy, and Harriet Miers, his legal counsel, Rice is ferociously protective. She shields him from worst-case scenarios, telling him to ignore criticism that misunderstands his greatness, and showers him with a constant stream of flattery that he is a world-historical colossus.

Rice so jealously guards her relationship that her former deputy at the State Department, Robert Zoellick, left after only about a year in his post, feeling himself excluded from playing a serious part in foreign policy decision making. Since his resignation in June, there has been no replacement or mention of one. After observing Zoellick's frustration, no serious person wishes to get between Rice and her object of affection, and as a result there is no one in charge of running the State Department on a day-to-day basis.

As national security advisor, before 9/11, Rice protected Bush from counterterrorism chief Richard Clarke's warnings about al-Qaida attacks and demoted Clarke. Before the invasion of Iraq she lent her imprimatur to the disinformation about Saddam Hussein's weapons of mass destruction and peddled it to the major media. She did not demand an Iraq postwar stabilization plan. Nor did she object to the Pentagon's seizure of Iraq's civil governance responsibilities from the State Department. Before Israel's attack on Lebanon in July, she did not caution against the possibility of Israeli failure against Hezbollah. She was party to the decision to lend full war materiel and intelligence support to the effort if Israel would undertake it. She requested no potential or actual damage assessment.

In the beginning, the didactic academic lectured her pupil that he stood at a crossroads like 1947, the making of the Cold War policy, "present at the creation," as Truman's secretary of state Dean Acheson described it. After 9/11 she inculcated in Bush the notion that he was a world builder and could imprint his design on a scale to match the Peace of Westphalia of 1648 that established the sovereignty of nation-states.

In July 2005, shortly after Rice became secretary of state, she transported the department's senior professional staff to a West Virginia retreat, where her head of policy planning, Stephen Krasner, delivered a lecture on the Peace of Westphalia followed by a lecture on the Truman Doctrine to explain the magnitude of Rice -- and Bush's -- ambition for "transformational diplomacy."

This May, as the situation in Iraq drastically worsened, Rice directed the senior staff that she wants no more reporting from U.S. embassies. She announced in the meeting, according to one participant, that people write memos only for each other and that no one else reads them. She said she didn't and wouldn't read them. Instead of writing reports, the diplomats should "sell America," she insisted. "We are salesmen for America!"

On Tuesday, kicking off the midterm elections campaign, Bush delivered a speech that cited Osama bin Laden's screeds, Lenin's "What Is to Be Done?" and Hitler's "Mein Kampf," and promised "complete victory" in Iraq. Rice contributed her own comparison of the "war on terror" to the American Civil War. "I'm sure there are people who thought it was a mistake to fight the Civil War to its end and to insist that the emancipation of slaves would hold," she said.

But the more delirious the rhetoric, the more hollow the policy. "There is no plan for Iraq," a senior national security official with the highest intelligence clearance and access to the relevant memos told me. "There is no plan. No plan."