Ben Affleck plumps up and adds weight to this picture about the mysterious demise of "Superman" star George Reeves. 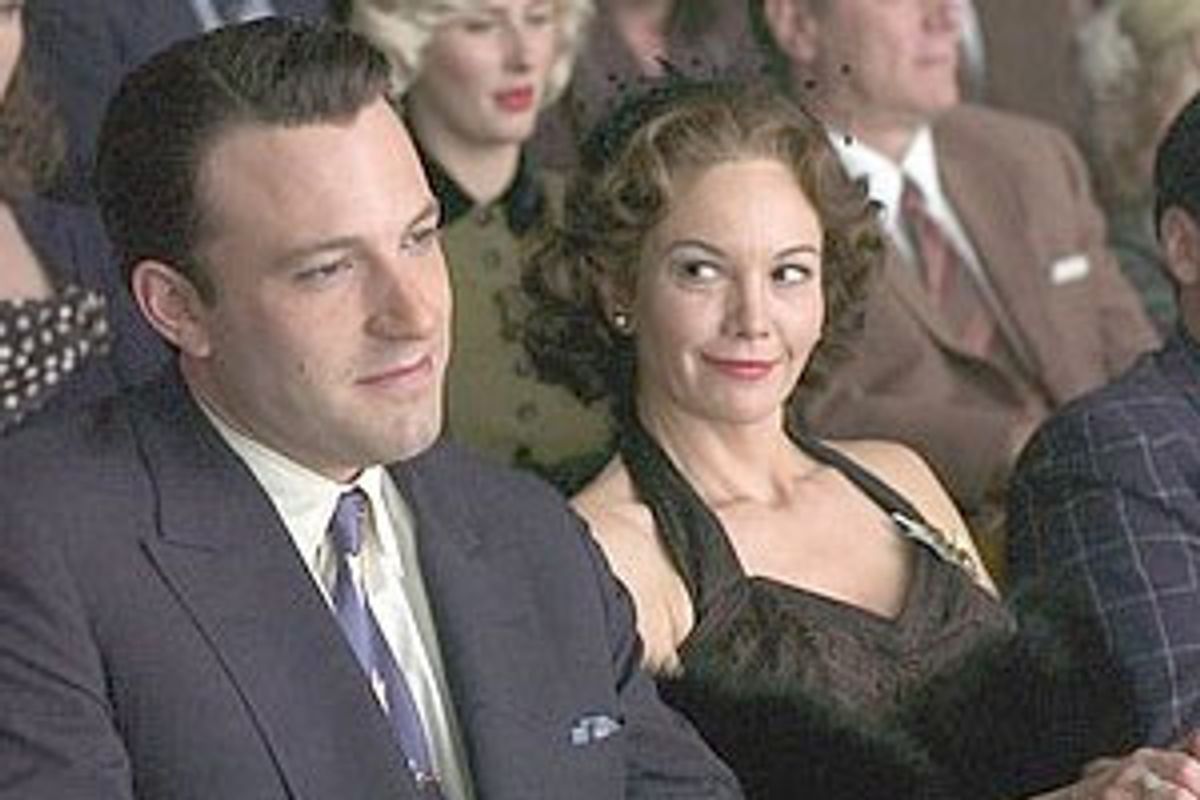 In 1959, George Reeves, a sometime film actor who ultimately made a name for himself playing Superman on the affectionately remembered television serial, was found dead in his Hollywood Hills home. He'd been felled by a single bullet, and although his death was ruled a suicide at the time, there have always been unanswered questions nestled around the case.

The mystery of Reeves' death is the subject of "Hollywoodland," written by Paul Bernbaum and directed by Allen Coulter (who has previously directed episodes of "The Sopranos" and "Sex and the City"), although the movie doesn't attempt any definitive answers. (Watch a clip from the movie here.) Coulter and Bernbaum blend fact and speculation, with a heavy dose of the latter, to tell the story -- and to map the psyche -- of the charismatic but troubled actor. And even though parts of the picture don't quite hold together, in the end, it sticks with you. A study of depression and disappointment in postwar Hollywood rendered in subtle but resolute brush strokes, the picture throws off a gentle, melancholy glow.

The movie opens with the actor's death and flips between Reeves' story and the investigation of his death: Reeves (Ben Affleck) dies in his bedroom, after retreating from a small party being held downstairs, and when the cops who show up to investigate cast their eyes from his body to the room's open window, we know exactly what they're thinking. His fiancée, Leonore Lemmon (portrayed as a rather coarse gold-digger type by Robin Tunney), has told them that Reeves had been depressed. But when a bottom-feeding private investigator, Louis Simo (Adrien Brody), starts looking into the case, he picks up threads of Reeves' story that suggest he might have been murdered: For years Reeves had been romantically involved, openly, with Toni Mannix (Diane Lane), the former-showgirl wife of MGM honcho Eddie Mannix (Bob Hoskins), a tough little fireplug of a man with long-standing mob ties.

The first significant glimpse we get of Affleck's Reeves is as a bluish corpse laid out on a coroner's table, a Hollywood leftover that no one knows quite what to do with. Shortly thereafter, Coulter and Bernbaum shift the action back to the early '50s, pre-"Superman," and we see Reeves skulking about in Hollywood nightclubs, looking to get his picture in the paper to remind Hollywood -- and himself -- that he's still somebody. (Reeves had played Brent Tarleton in "Gone With the Wind," but his movie career had never taken off.) Affleck put on some weight for the role, and while I'm not generally a fan of weight gain as an acting technique, there's something unusually touching about the actor's face here: The extra baggage under his chin gives his boyishness a temporal quality; this is a picture of handsomeness with a clock ticking behind it.

When Reeves first meets Toni, he charms her by self-deprecatingly showing off his patented actor's facial expressions, and she identifies each one gleefully: "Noble! Stoic! Heroic! Bad Shellfish!" The two tumble into bed on that first night and become almost inseparable thereafter, and Affleck and Lane effortlessly make us understand why. Neither of them wants to come off as taking themselves seriously -- their breezy banter is like something they once read in a movie script and memorized for later use. But the undercurrents of their conversation tell the more important story. Toni is several years older than Reeves, and beneath their casual, carefree veneer, they're both worriers, knowing that their chances for happiness (and, in Reeves' case, career success) will diminish with each new wrinkle or unsheddable extra pound.

Lane is wonderful here: She's one of those rare actresses who can bring flirtatious vitality to a character without blasting us with excessive twinkle. Toni is confident and irresistible, but Lane understands that the flip side of such allure is the fear of losing it, and (with the exception of one scene that's rendered a bit heavy-handedly) she shows us flashes of Toni's desperation as if they were glimpses of a shapely leg beneath a crinoline -- a suggestion rather than an overt declaration.

"Hollywoodland" suggests that Reeves took on the role of Superman reluctantly: He considered himself a serious actor and thought putting on a silly, stretchy suit was beneath him. (To add insult to injury, the suit wasn't even Superman's proper red and blue; to show up properly on black-and-white television -- the show later switched to color -- it had to be a nondescript gray.) Coulter shows Reeves donning that suit for the first time, with Toni looking on: He frowns at the sight of those puffy padded muscles built right in -- their fake masculinity is an outright affront to the dignity he's trying so hard to sustain.

But he reluctantly becomes accustomed to the suit and the fame it brings him: In one of the picture's most sharply directed scenes, Reeves makes a live promotional appearance in front of a group of kids in Cub Scout uniforms and cowboy outfits (and their parents -- the show was designed to appeal to adults as well, and it succeeded). When Reeves hears his cue from backstage, he takes one last swig from his flask (he was a notorious partyer) and, heeding the tinny but still eerily heroic-sounding music tootling over the cheap loudspeaker, leaps out to face his public. He wrestles with some baddies, twisting their guns into useless licorice loops. Then Coulter and Affleck execute a deft shift, from joyous nostalgia to ominousness; the scene simultaneously heightens the movie's drama and sends us deeper into Reeves' character.

But Reeves' story is only part of "Hollywoodland," and that's a problem. The suffering of down-and-out detective Simo isn't just a framing device here; Coulter and Bernbaum give it a weight equal to Reeves' travails, suggesting a parallel, or at least a kinship, between the two men, and yet Simo's story just doesn't resonate in the same way. Separated from his wife (the terrific Molly Parker) and young son (Zach Mills), Simo has plenty to be miserable about. But even though Brody works hard -- and he's got those magnificent drooping eyes, which suggest both innocence and a seen-it-all-before weariness -- his scenes don't spark, and the movie drags around them. Simo just isn't as compelling as Reeves and Toni are, perhaps partly because there's something inescapably moving about a guy who played a superhero on TV and yet felt less than adequate in real life. In fact, "Hollywoodland" may be less about the dark side of Hollywood than about the frailty of human nature: There's more between man and Superman than just a layer of fake muscle.