Mocking Bush is my patriotic duty

A comedian explains how cruel jokes about the president can stop terrorism. 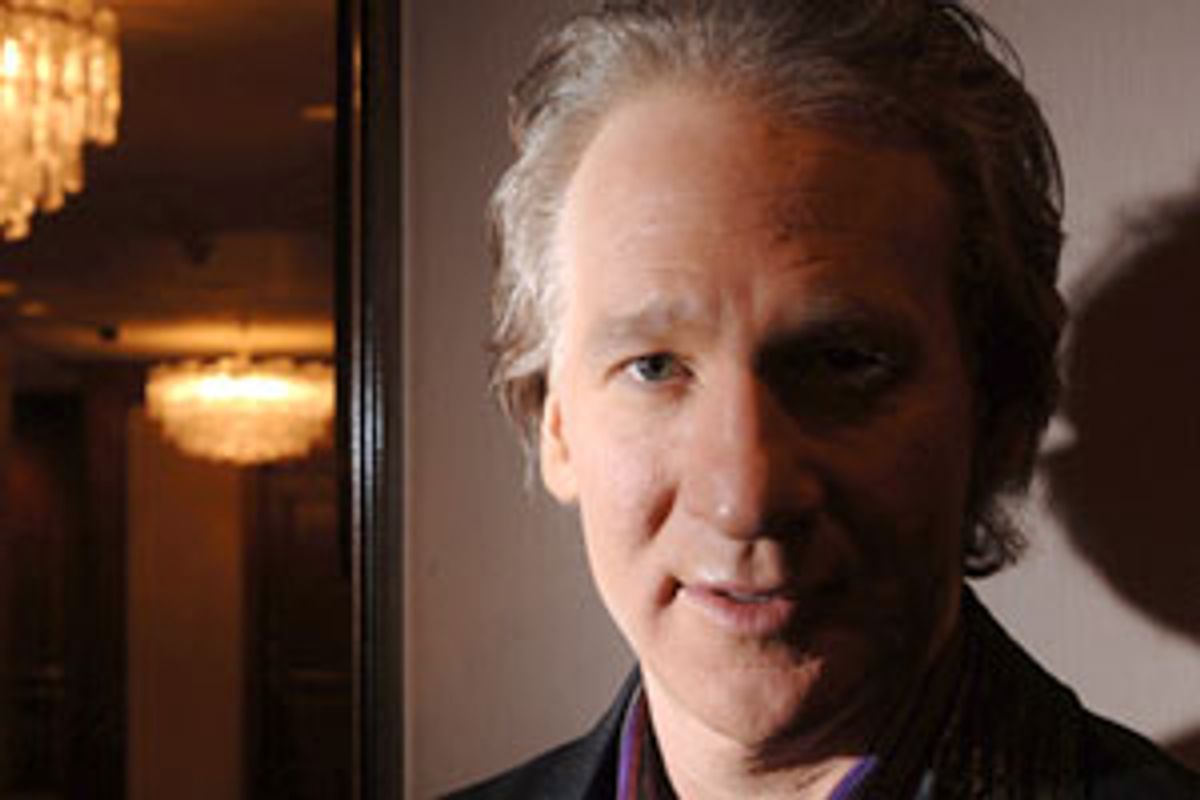 New rule: Bad presidents happen to good people. Amid all the 9/11 anniversary talk about what will keep us safe, let me suggest that in a world turned hostile to America, the smartest message we can send to those beyond our shores is, "We're not with stupid." Therefore, I contend -- with all seriousness -- that ridiculing this president is now the most patriotic thing you can do. Let our allies and our enemies alike know that there's a whole swath of Americans desperate to distance themselves from Bush's foreign policies. And that's just Republicans running for reelection.

Now, of course, you're gonna say, "But Bill, ridiculing Bush is like shooting fish in a barrel," or, as Dick Cheney calls it, "hunting." Maybe, but right now it's important, because America is an easily misunderstood country these days -- a lot of the time it's hard to make out what we're saying over the bombs we're dropping.

But we are not all people who think putting a boot in your ass is the way to solve problems, because even allowing that my foot lodged in your ass would feel good, which I don't -- what then? OK, my boot is in your ass, but I can't get it out, so I'm not happy, and it's in you, so you're not happy -- there's no exit strategy.

Anyone who opposes the indefinite occupation of Iraq shouldn't be labeled an al-Qaida supporter. That's like saying that if I tell my exterminator that there are more efficient ways to rid the house of vermin than hitting them with a hammer, I'm "for the rats."

So yes, for the sake of homeland security, I ridicule the president -- but it gives me no pleasure to paint him as a dolt, a rube, a yokel on the world stage, a submental, three bricks shy of a load, a Gilligan unable to find his own ass with two hands. Or, as Sean Hannity calls it, "Reaganesque."

No, it pains me to say these things, because I know deep down George Bush has something extra -- a chromosome. Cruel? Perhaps, but it may just have saved lives. By doing the extra chromosome joke, I sent a message to a young Muslim man somewhere in the world who's on a slow burn about this country, and perhaps got him to think, "Maybe the people of America aren't so bad. Maybe it's just the rodeo clown who leads them. Maybe the people 'get it.'" We do, Achmed, we do!

And that's why making fun of the president keeps this country safe. The proof? I've been doing it nonstop for years, and there hasn't been another attack. Maybe the reason they haven't attacked us again is they figured we're already suffering enough.

If I could explain one thing about George W. Bush to the rest of the world it's this: We don't know what the hell he's saying either! Trust me, foreigners, there's nothing lost in translation, it's just as incoherent in the original English. Yes, we voted for him -- twice -- but that's because we're stupid, not because we're bad. Bush is just one of those things that are really popular for a few years and then almost overnight become completely embarrassing. You know, like leg warmers, or Hootie and the Blowfish, or white people going, "Oh no you di-int."

So while honoring the anniversary of September 2001, we must also never forget September 2000. That's the month when Gov. George W. Bush said, "I know that human beings and fish can coexist peacefully." If you don't believe me, you can look it up on both internets. The world changed on 9/11. He didn't. That's why we owe it to ourselves, and our children, to never stop pointing out that George W. Bush is a gruesome boob.