Despite a few tweaks, ABC stands by its deceptive miniseries, and in tonight's episode, all the lies make Bush look better. 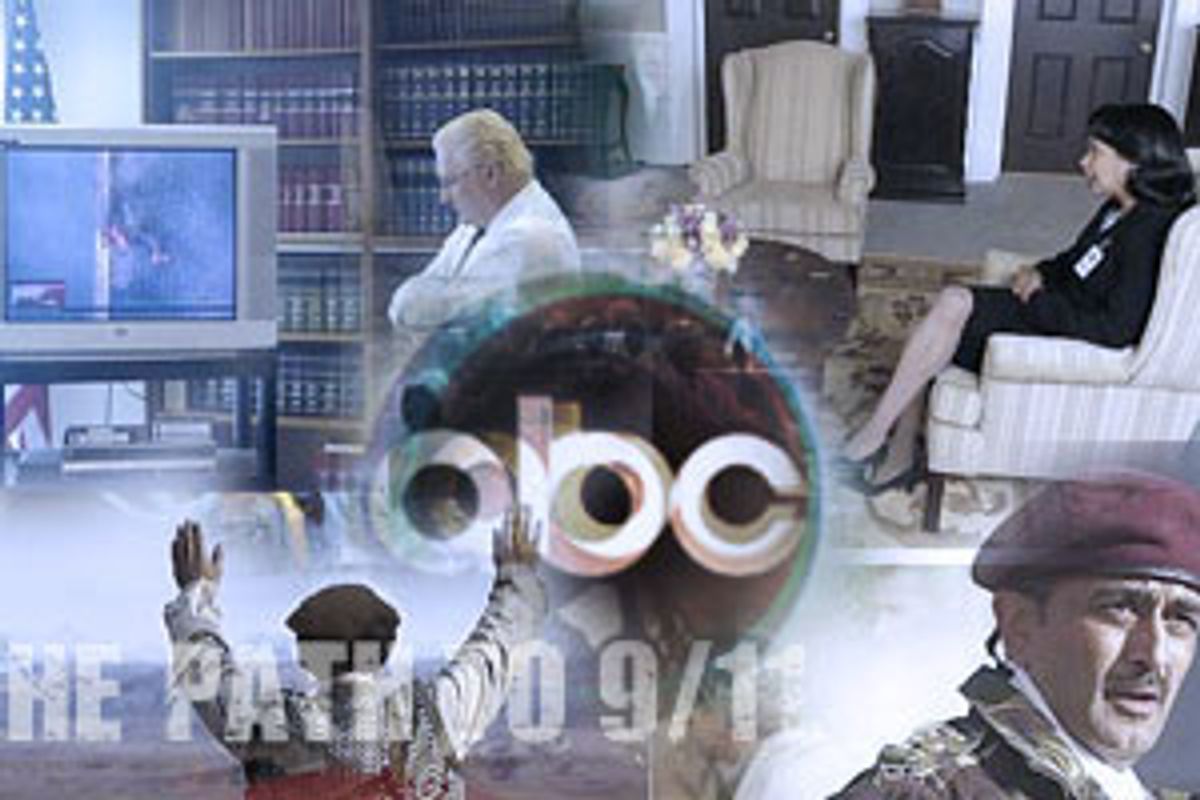 Despite right-wing claims that ABC edited the series to make it easier on Bill Clinton, the worst distortions went uncorrected -- and there are plenty more to come.

"ABC bows to Bill & friends," the New York Daily News blared Monday. But that's only the latest media distortion of the dishonest docudrama "The Path to 9/11." As everyone knows by now, the two-part miniseries is an anti-Clinton hit job written by a conservative Iranian-American, Cyrus Nowrasteh, a friend of Rush Limbaugh, that lards blame for the tragedy on President Clinton and his cabinet and airbrushes the culpability of George W. Bush and friends.

Although ABC has been widely depicted as caving to Clinton administration veterans by editing the movie in the days before it aired, in fact, the changes in Sunday night's Part 1 were minimal, and didn't fix the biggest falsehoods. And Monday night's installment is arguably more unfair and inaccurate, ignoring the Bush administration's own missteps around al-Qaida and propagating a well-debunked 9/11 lie -- that the president gave Vice President Dick Cheney the order to shoot down hijacked airliners.

In Sunday night's segment, one of the biggest distortions was that the CIA and Northern Alliance fighters had a clear shot at bin Laden in early 1998, but the Clinton Cabinet dithered. (In fact, the 9/11 Commission report found widespread doubt about the U.S. capacity to actually get its target at the time.) In the original version of "Path to 9/11," the situation is drained of ambiguity -- we've got bin Laden in our sights -- and National Security Advisor Sandy Berger is the clear bad guy, insisting, "I don't have that authority" to OK the operation, and hanging up the phone on CIA director George Tenet.

In the final version aired Sunday, there's still no doubt that we can get bin Laden. Berger says the very same line, but doesn't hang up on Tenet. Instead, he passes the buck to him, and Tenet whines that he'll get all the blame if the operation goes awry, like Attorney General Janet Reno after she authorized a move on the Branch Davidian compound in Waco, Texas. The scene stands as a monument to Clinton-era impotence, with Northern Alliance leader Ahmed Shah Massoud intoning darkly, "Are there no men in Washington?" Soon thereafter we see shots of a bouncy Monica Lewinsky as the president intones, "I did not have sexual relations with that woman..."

Arguably the worst distortion in Part 1 of "The Path to 9/11" went utterly uncorrected. Secretary of State Madeleine Albright, depicted as a high-WASP bitch on wheels, neutralizes what little testosterone the Clinton men have (at least when it comes to bin Laden rather than interns) any time she's on the screen. She hectors and lectures, but a Tomahawk assault on a bin Laden campsite is authorized despite her reservations. When it misses the al-Qaida leader by a few hours, it's clear he was warned by Pakistan (in fact, U.S. officials did warn Gen. Pervez Musharraf, for fear he'd see missiles in his airspace and suspect India had launched an attack.) The film clearly fingers Albright as having warned the Pakistanis, and in fact she seems downright proud of blowing the operation. But it was (Republican) Defense Secretary William Cohen who asked vice chairman of the Joint Chiefs of Staff Gen. Henry Hugh Shelton to warn Pakistan.

What does Monday night hold? Another big ABC lie has been that the second half of the film apportions blame more fairly, laying out the mistakes of the Bush administration as well. That's only true if you think Condoleezza Rice is the president. Like Albright, she comes off as a schoolmarmy, hierarchy-obsessed smarty-pants more interested in protecting the president -- who is described as really, really wanting to get bin Laden -- than protecting Americans. But Bush himself gets off unbearably easy.

There's no reference to his monthlong vacation after receiving the Presidential Daily Briefing "Bin Laden determined to strike in the United States." There's no scene showing Rice or Cheney ignoring the warnings of former Sens. Gary Hart and Warren Rudman's terrorism commission, as they did. There's certainly no scene of the president reading "The Pet Goat" for many painful minutes after he's informed of the attack on our soil the morning of Sept. 11.

Maybe the worst lie I haven't seen critiqued has to do with whether Bush gave the go-ahead for American fighter jets to shoot down hijacked airliners. In fact, though Cheney bragged he and Bush made that decision, the NORAD tapes acquired by the makers of "United 93" and published in Vanity Fair showed that never happened. Military officials waited in vain for such an order, but it never came.

The liberal blogosphere is either blamed or credited with getting ABC to at least slightly alter the docudrama. (One important change is that it no longer presents the fictionalized work as representing the findings of the bipartisan 9/11 Commission.) In fact, despite the howls of bloggers and Clinton administration officials, the network hung fairly tough. I'm always a little uncomfortable when public pressure forces a media company to edit a piece of work because of politics -- certainly I wouldn't want Salon edited by a team of Pat Robertson and Harry Reid. But in this case, given the number and seriousness of the inaccuracies and the distortion of the 9/11 Commission's work, the network should have listened to its critics. ABC's decision to stand behind a damaging, distorted version of Sept. 11 makes a sad day that much sadder.