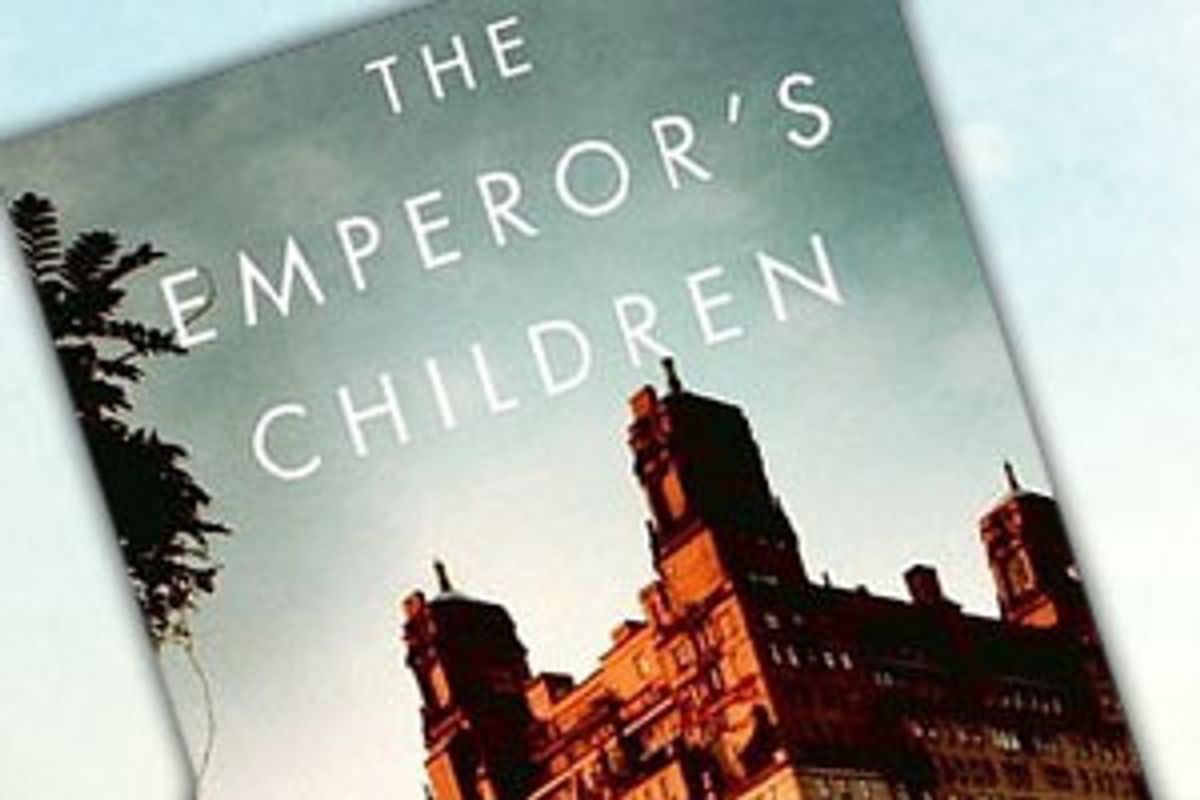 An early chapter in Claire Messud's new novel, "The Emperor's Children," finds Murray Thwaite, an acclaimed journalist, pondering a manuscript in his study. He has removed his work-in-progress -- a series of reflective essays called "How to Live" -- from its locked drawer, only to be interrupted by his beautiful, 30-year-old daughter, Marina. An aspiring writer, she has come to seek guidance about her stalled life. Murray, struggling to conceal his annoyance, humors her with a perfunctory stab at playing mentor. Before summarily adjourning the conversation with a hug, he asks her that clichéd question: "What do you want to do with your life?"

The scene is rich in irony, and tells us a lot about Murray Thwaite. Composing a manifesto of unsolicited advice to unknown readers, he can't spare the time to counsel his own daughter in need. But there's another revealing juxtaposition: On paper, Murray meditates on "how to live," but reflexively, he phrases the question differently, in terms of what to "do with" a life. And if "How to Live" is surely, as Murray worries, a grandiose book title, then conceiving of life as something to be shaped and manipulated is, if not grandiose, then at least a luxury confined to a small segment of humanity. The notion is quintessentially American, and the highly educated New Yorkers in "The Emperor's Children" confront it with a special brand of anguished expectation. Messud, training her extraordinarily perceptive vision on this social world, has expanded her range and ratified her own status as a literary star.

The cast of characters is a constellation of family and friends linked to the Thwaites. Danielle Minkoff, Marina's sensible best friend from their undergraduate days at Brown, works as a producer of television documentaries. Julius, another college friend, won some early success as a freelance critic, but distractions -- money troubles, a sybaritic gay lifestyle -- have derailed his progress. Ludovic Seeley is a suave Australian who recently arrived in Manhattan to launch a cultural magazine. Just before his relocation, he met -- and intrigued -- Danielle at a party in Sydney, Australia, where she was on a business trip to research a project about Aborigines; through her, Ludovic becomes entangled with this group. Finally, there's Frederick, nicknamed Bootie, Murray's 18-year-old nephew. Overweight and awkward, Bootie was admitted to Harvard but went to state school for financial reasons and promptly dropped out to become an autodidact. Now, Emerson and Tolstoy in tow, he makes a pilgrimage from his hometown upstate to the city, hoping to get to know his admired uncle.

The novel is largely about the meaning of success, and Messud's characters define it in various ways. Julius and Marina are, in a sense, similar: They crave literary achievement but balk at the necessary labor. Julius barely scrapes by on freelancing; Marina, floundering on a long overdue book project about the semiotics of children's clothing, relies on the largesse of her parents. Narcissistically, unhappily, they prefer these indignities to what they see as bourgeois or ordinary: jobs, regularity, schedules. But they have arrived at their dogma from opposite origins: Marina needs to live up to her background, while Julius, from a humble family outside Detroit, needs to escape his. "It all came down to entitlement," Julius observes. "Marina, feeling entitled, never really asked herself if she was good enough. Whereas he, Julius, asked himself repeatedly, answered always in the affirmative, and marveled at the wider world's apparent inability to see the light. He would have to show them."

Julius' aspirations, however, are hindered by a new affair (having secretly resorted to temping, he seduces his boss) -- a weakness to which the truly ambitious would never fall prey. The single-minded Ludovic Seeley, for one, appears more likely to subordinate his love life to his professional goals than vice versa -- indeed, when he becomes romantically involved with Marina, his motives are suspect. Bootie, by contrast, is not a careerist. He would probably scoff at Ludovic's efforts to assemble a star-studded launch party for his magazine. (Susan Sontag hasn't replied, Ludovic complains to Marina. "But at least Renee Zellweger is a yes.") With the fierce purism of youth, Bootie's ambitions are perhaps the grandest of all. For him, the pursuit of knowledge and wisdom is everything. And he is sure that his Uncle Murray is of like mind, indifferent to accolades -- a conviction that sets him up for inevitable disenchantment.

This novel is a departure, in certain ways, from Messud's past work, two novels and two novellas. An American setting is a first for the cosmopolitan author. (Although she was born in the States and lives here now, she spent much of her life elsewhere. Her mother is Canadian, her father French-Algerian, her husband British, and her characters have been correspondingly far-flung.) While the prose remains exquisitely precise, patiently unfurling in comma-rich sentences, it is less lyrical and embroidered here. And where previous fiction favored character studies and atmosphere over plot, "The Emperors Children" is more story-driven than ruminative.

It is also more concerned with the superficial, as Messud acknowledged in a recent profile in the Guardian. (There was "a conscious effort to fit the form and the substance," she is quoted as saying. "In a world of lots of surfaces, to try to make the surfaces tell.") She nails the habits of her demographic: Marina, passing Bootie in Central Park, is on the way not merely to yoga, but to "my favorite outdoor yoga class." Danielle and Ludovic, at a fashionable restaurant, are served "wispy constructions adrift on oceans of white porcelain." This deployment of cultural markers can seem at once satirical and fetishistic, perhaps unavoidably for an examination of the lifestyle details of a kind of aristocracy. Yet Messud's astute perceptions extend beyond the social realm. She is equally adept at evoking a self-conscious hand gesture, excruciating awkwardness, and the small betrayals that take place even between ostensibly loyal friends.

Messud's characters, while less intimately known than in previous fiction, are nonetheless sharply drawn and alive. Danielle, the most sympathetic, is especially vivid, with a plausible interior life that receives disproportionate authorial attention. Although not immune to envy or the lure of New York literary society, she is grounded and content with her moderately prestigious job producing documentaries, and with her spare West Village studio (content, at least, until the plot takes off). And nearly all the characters are gratifyingly complex. The only exception is Ludovic, a one-dimensionally unlikable operator.

Although not much of a flesh-and-blood character, Ludovic is a mouthpiece for some interesting ideas, the engine of most of the substantive debate among the characters. He's a proponent of seeing things clearly, of debunking (his magazine's name is "The Monitor"). "What could be rarer, more precious, more compelling than unmasking these hacks for what they are?" he asks, referring to New York media royalty. "Than an instrument to trumpet that the emperor has no clothes, and the grand vizier has no clothes, and the empress is starkers, too -- do you get my point?" He is the one who suggests the title for Marina's book about children's clothing -- "The Emperor's Children Have No Clothes" -- from which Messud takes her own.

The title's "emperor" also refers to Murray, whose relationships with most of the younger characters -- his "children" -- are at least loosely paternal in fraught ways: The female characters relate to him like Electra, the male ones like Oedipus. These relationships drive the plot, which is a feat of irresistibly readable storytelling, at times agonizing in its tension. A treacherous affair begins; Bootie, now a gravely disappointed acolyte, plots a spectacular betrayal. Explosive results feel inevitable.

These developments aside, there's another source of foreboding in the narrative. As readers will quickly realize, this is a Sept. 11 novel -- or really, a Sept. 10 novel, exploring the last days of an era. It opens in March of 2001. The characters are, of course, oblivious to the approaching disaster -- conspicuously so. Danielle refers to the dearth of news ("The biggest thing is Nicole Kidman in Moulin Rouge!"); Julius calls the times "almost criminally uninteresting." But our own awareness invests the narrative with a sense of dread.

When 9/11 comes, the day's consequences are not about politics or tragedy. Instead, we see the more mundane ways New Yorkers were affected in the immediate wake of the attacks. Messud captures that moment, summoning the disorientation, the reordering of priorities, as well as the images: "dust-covered, bewildered people, some crying, drifting up the avenue, lots of them, like refugees" The day also plays a pivotal role in the narrative, defusing the other story lines; the effects of this literal explosion avert their feared outcomes. And the economy's recoil and the changed national mood result in some lost jobs and reassessed career dreams. For the novel's privileged bunch, it's a wakeup call. This time, life does what it will with them.