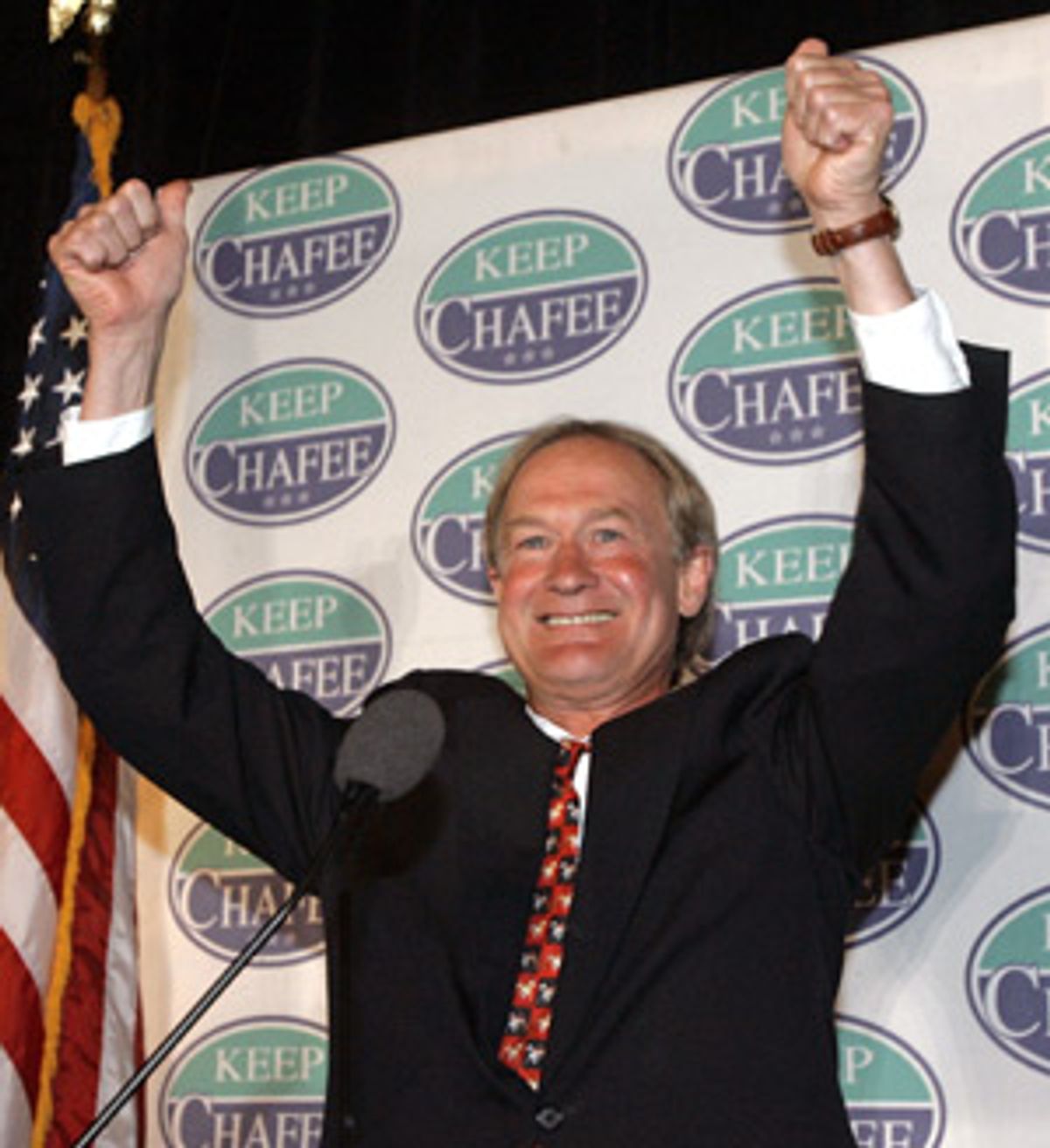 In truth, the battle over the future direction of the Republican Party was decided at the 1964 GOP Convention when the party nominated Barry Goldwater -- and rejected the East Coast centrism personified by Nelson Rockefeller. But incumbent Lincoln Chafee's narrow (5,000-vote) primary victory over populist conservative Steve Laffey still had reverberations far beyond Rhode Island. No matter how bravely the Democrats spin the outcome, Chafee's 54-to-46 percent triumph, while not unexpected, was a blow. Gone are hopes of an easy Senate seat pickup here, since the national Republican Party had announced in advance that it would abandon the state as unwinnable if Laffey prevailed. Now Democratic nominee Sheldon Whitehouse, a former state attorney general, will face a tough battle against Chafee -- the only GOP senator to vote against the Iraq war -- in a race that the Providence Journal already gleefully described as a "WASP preppy political Olympics."

At the downtown Providence bar McFadden's, the site of the Democratic primary night celebration, the mood was distracted. A dozen TV sets were turned to the Republican primary coverage -- all with the sound off -- which was the equivalent of watching a car crash in a silent movie. As Chafee held onto a narrow lead through the evening, a graying local Democratic politico standing at the bar commented, "Joe Lieberman had the wrong views, but the right party. Chafee's the opposite -- the only thing wrong with him is that he's a Republican."

When Whitehouse offered his own victory statement (he had nominal primary opposition), he inadvertently underscored the difficulty in making a political case against Chafee. "One of the first decisions a senator makes is whether they will vote for a U.S. Senate controlled by the Republicans or led by the Democrats," Whitehouse said, reciting his prepared text from memory. "It's on that the George Bush agenda will rise or fall ... I can promise you this: I will never vote for a United States Senate under Republican leadership."

Even without the aid of a focus group, it is easy to grasp that this argument against Chafee is as verbose as it is valid. How do you convince liberal Rhode Island voters -- who revered Chafee's late father, John, during his quarter century in the Senate -- that the incumbent's party allegiance is more important than his voting record? Since Mitch McConnell, the GOP Senate majority leader in waiting, is little known outside the backrooms of the Capitol, Whitehouse lacks a symbol to personify the implications of Chafee voting with the Republicans to organize the Senate.

Laffey, who campaigned in the primary as the last angry man in Rhode Island, was quick to endorse Chafee in his concession speech. But the scorched-earth primary left scars likely to carry over into the fall campaign. Not only did the national arm of the Republican Senate majority run vicious attack ads against Laffey, but Chafee, that rare politician with a Caspar Milquetoast streak, personally joined in the onslaught. How jarring for voters to hear a voice-of-doom TV narrator declare ominously, "Steve Laffey: Untrustworthy, unpredictable, unreliable!" and then have the ad immediately switch to a bland "I'm Lincoln Chafee and I approve this message." Darrell West, a Brown University political scientist, said in an interview Tuesday before the polls closed, "The negativity on Chafee's part is problematic because, up to now, he has [had] such a nice-guy reputation. And it would carry over to the race with Whitehouse, since, because of the lateness of the primary, Chafee has only eight weeks to rebuild his image."

Chafee may have also risked his independence by depending so heavily on the national Republican Party to run his get-out-the-vote operation. Referring to both the snarky ads and GOP on-the-ground support, Whitehouse said in an interview at the end of the long evening, "I think it has created a new perception of Lincoln Chafee. And I think it's disappointing for many people to see what he engaged in to win this race -- along with all the Bush operatives who were sent up here to help him."

Whitehouse may be disappointed, but virtually all candidates resort to negative ads if the polls are threatening enough. As Bill Lynch, the state Democratic chairman, put it, "Having seen the last month of the Chafee campaign, I fully expect they will say and do anything to get reelection. And we will respond."

In a sociological sense, it will be intriguing to see if the tenor of the Whitehouse-Chafee contest becomes nearly as personal and vindictive as the GOP primary. Laffey is a maverick, a self-made outsider, while Chafee and Whitehouse share the same aristocratic lineage. In fact, the fathers of both nominees were roommates at Yale, and their sons attend the same prep school. "I like Linc Chafee," Whitehouse said Tuesday. "This is not an issue about him personally. I hope and expect that he also likes me and my family."

Perhaps the biggest factor in the fall campaign is simply the unswerving Democratic allegiance of voters here. When I foolishly asked Whitehouse if he feared the Republican Party's unchallenged mastery at maximizing its turnout, the Senate nominee resorted to the slow style of speech normally reserved for backward children and cabdrivers with a shaky command of English. He said, with a slight tone of exasperation at out-of-state reporters, "We are in R-h-o-d-e I-s-l-a-n-d."