Run over in the middle of the road 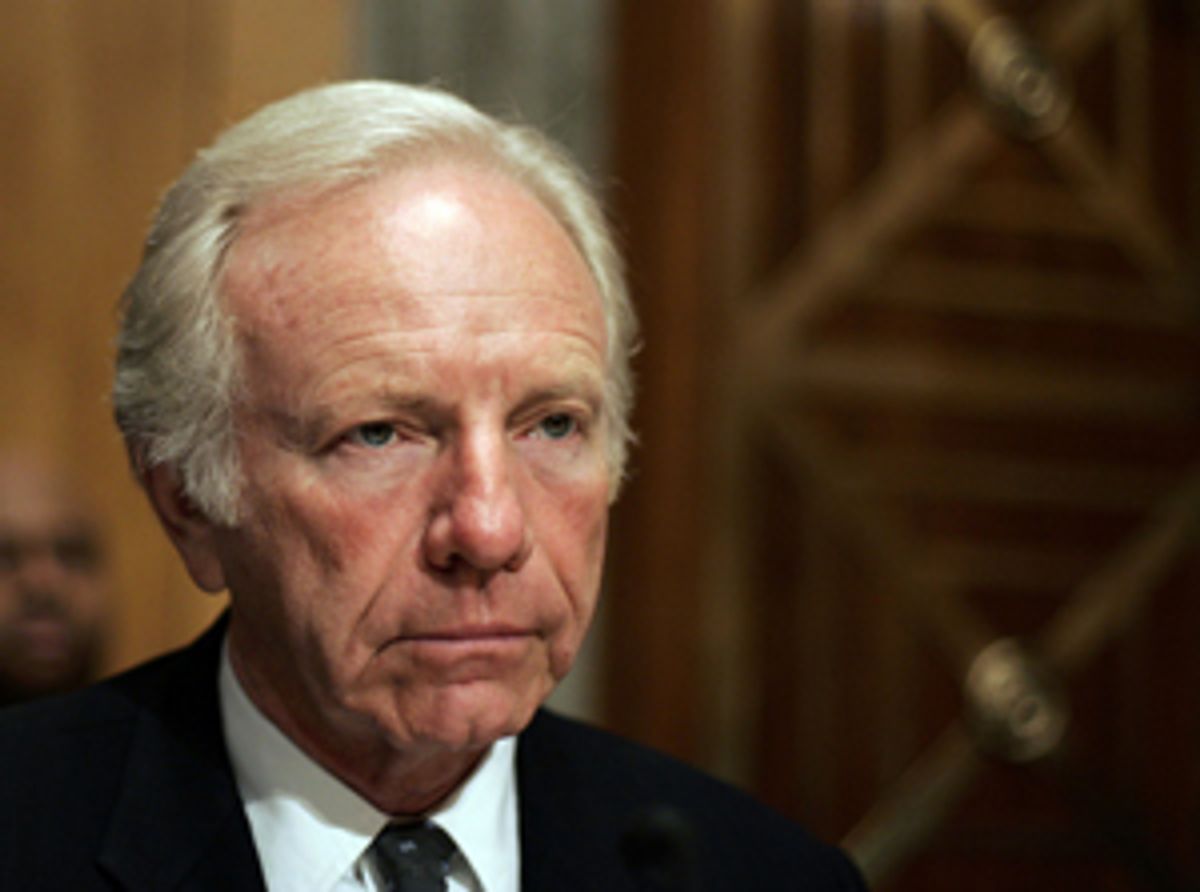 Tuesday was supposed to be a day of political self-affirmation for Joe Lieberman. The junior senator from Connecticut, who still sits on the Democratic side of the room but is on November's ballot as an independent, was appearing at a series of events that were meant to promote his message of compromise and nonpartisan governance. It's a message that he hopes will resonate with enough voters that he will defeat the nominee of his own party, Ned Lamont. But Tuesday didn't turn out quite as Lieberman planned.

In committee chambers, Homeland Security Secretary Michael Chertoff was scheduled to address Lieberman and his colleagues on home-front progress in the "war on terror." On the Senate floor, his colleagues were beginning debate on a bipartisan port security bill that Lieberman had nurtured for months. And in the afternoon, Lieberman was scheduled to unveil a new painting to commemorate the Connecticut Compromise of 1787, when America's forefathers agreed to set their differences aside to hammer out the structure of the U.S. Constitution. At every stop along the way, Lieberman planned to take a moment to praise moderation and compromise, his campaign theme as he runs an independent campaign against the liberal upstart Lamont.

The day started well enough for Lieberman, with the senator squarely on message and Democrats and Republicans both playing nice. Just before 10 a.m., Lieberman took his place as the minority leader of the Senate Committee on Homeland Security and Governmental Affairs. He congratulated his colleagues for their ability to "forget party labels and work together as Americans." "In a capital city which has become all too partisan," he said, "on the question of homeland security  this committee has acted with a real sense of unity."

But such positive talk does not go far these days in Congress. Both Democrats and Republicans have been ratcheting up their rhetoric in anticipation of November's election. Just minutes after Lieberman finished speaking, Democratic senators began a press conference across the street, on the second floor of the Capitol Building, to announce a proposal to amend Lieberman's bipartisan port security bill. Sen. Charles Schumer, the New York senator who is leading Democratic 2006 election efforts, took the opportunity to warn against a continuation of the Bush administration's "grossly mismanaged and underfunded" efforts to protect the nation against terrorist threats.

"This past week everyone has been asking, are we safe?" Schumer announced in a press release handed out to reporters. "Well, if you look at the area of port security, the answer is a resounding no." He proposed an amendment to require a four-year timetable for every cargo container entering the United States to receive a scan for nuclear materials. The proposal had all the trappings of a political gambit. By proposing a strict timeline for 100 percent screening, Schumer and other Democrats could paint Republicans who opposed the amendment as soft on homeland security in the coming election. Under the current bill, as co-written by Lieberman, 100 percent nuclear scanning of overseas cargo would be installed as soon as it was "possible" and "practical," and no timeline is set.

Republicans, for their part, were ready to fight back. Maine Sen. Susan Collins, who chairs the Homeland Security committee and works closely with Lieberman, had sent her staff to circulate an opposition press release to reporters attacking Schumer's amendment. "100% Scanning of Cargo Containers Is a Red Herring," announced the Collins release, which was printed on committee stationery and quoted from a recent Washington Post editorial and shipping industry position papers. The Schumer plan, the release continued, was a "superficially appealing ... recipe for crippling our manufacturing and commerce."

But the issues aside, by 10:15 a.m., Lieberman was already losing control of the day's message. Partisanship had reared its ugly head. New Jersey Democrat Frank Lautenberg, who supports the Schumer amendment and sits on the Senate's Homeland Security committee, grabbed a copy of Collins' press release from the Capitol and hightailed it back to the committee hearing room, where his colleagues continued to congratulate each other on their bipartisanship. When it came his turn, Lautenberg began reading Collins' release into the record, implicitly attacking the chairwoman for making such claims on official committee stationery. "If we inspected one out of 20 people going into the White House or coming into this place, would we feel secure?" Lautenberg asked, rhetorically, as Lieberman listened. "I don't think so."

Moments later, Lautenberg stood in the hallway outside the committee room telling reporters of the coming showdown. "That's the first shot across the bow," Lautenberg said, of the Collins release. When asked if he thought the Homeland Security committee had been an oasis of bipartisanship, as Lieberman suggested, Lautenberg chuckled. "I mean, come on," he said. "There is a mind-set here that says do it our way or no way." As an example, he pointed to a debate last year over the formula for homeland security grant funding, when Lieberman had sided with the Republican leadership. "Sometimes the best of us err ... Sen. Lieberman agreed with Sen. Collins," Lautenberg complained. "It's hard when there is such harmony in the [committee] leadership."

About an hour later, Lieberman, hoping to keep up his theme of the day, staged a telephone conference call with reporters to discuss his leadership on Homeland Security issues. Again, he praised the committee that he leads with Collins for creating "a high ground of bipartisanship" in a "destructive and partisan" environment. When asked, however, he dodged questions about the Schumer amendment and the ensuing tumult in the committee room. "I want to talk to Senator Collins," Lieberman said. "I am in the process of trying to educate myself."

Though it was not yet lunchtime, Lieberman found himself in the middle of a partisan Catch-22, forced to choose between the compromise bill he had brokered with his Republican partners, and a Democratic proposal that seemed designed to paint Republicans as soft on homeland security. "There is a real confusion on terminology here," Lieberman said of the Schumer proposal.

By the time lunch ended, any semblance of bipartisan cooperation had long since dissipated. Over on the House side of the Capitol, Republican Majority Leader John Boehner had speculated to a reporter that Democrats are "more interested in protecting the terrorists than the American people," a quote that was repeated by reporters for the reactions of senators in the hallway. Senate Minority Leader Harry Reid of Nevada appeared before the television cameras to denounce President Bush's Monday night speech commemorating Sept. 11 as partisan "finger pointing." "We had a wonderful opportunity last night to listen to the president bring people together," Reid said. "He didn't do that."

But Lieberman, one of the last bipartisan champions in the Senate, soldiered on. At 3 o'clock, he appeared as scheduled with other senators to commemorate the new painting of the Connecticut Compromise, an oft-forgotten turning point in U.S. history. The compromise, which occurred before the Constitutional Convention, proposed a bicameral legislative branch, the House and the Senate, a deal that satisfied both agricultural states with scant population and the more populous states. "That work was the work of compromise," Lieberman told the hundred or so history buffs in attendance, again emphasizing the day's theme. "In this capital these days, some people speak of compromise as if it were surrender."

A few minutes later, Lieberman was again surrounded by reporters asking about the hard partisan realities of the current legislative session. A reporter asked if he worried the port security bill would get bogged down by the partisanship he so disdains over the coming days. Though a reception was just beginning to commemorate a harmonious day in the 18th century, the senator stopped to acknowledge the present. "I must say," Lieberman allowed, "I am a bit concerned about it."