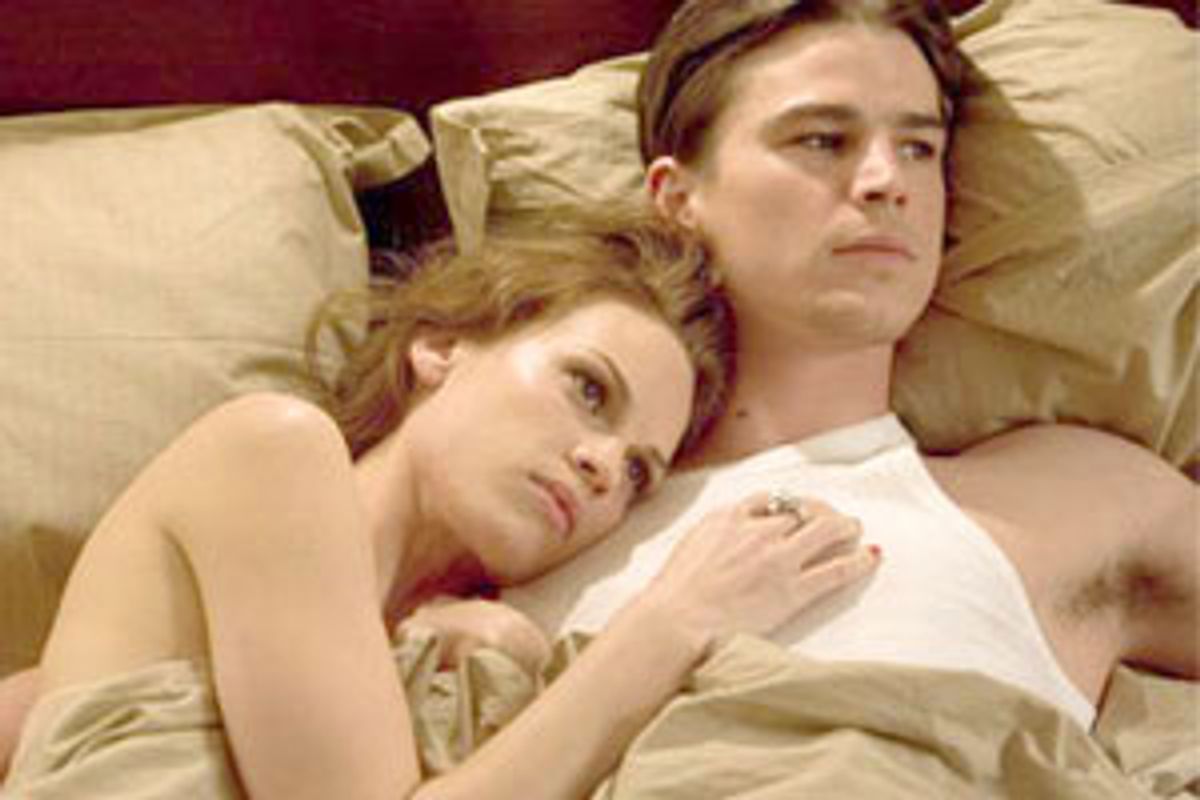 The marrow-and-bone elegance of hard-boiled fiction -- the kind of prose left behind by the likes of Raymond Chandler and James M. Cain -- is determined not by how many words a writer can pack in, but by how few he needs. To see how James Ellroy, supposedly a master of modern hard-boiled fiction, stands up to the true masters, try this simple test: Look at your bookshelf and see how much space any three novels by Cain or Chandler take up. Now try the same with any three books by Ellroy.

Ellroy is the kind of writer who uses 30 words when eight would do, and still falls down on the job when it comes to descriptive writing. In one sentence he'll introduce a character as a "slatternly woman" and, a few paragraphs down, refer to her as a "slattern": Instead of giving us the picture with a few well-chosen words on her housedress, her hair, perhaps the misapplication of her lipstick (as Cain would have), he goes for the cheap shorthand, as if to free up more words to squander elsewhere.

But because a good filmmaker, let alone a great one, can often tease poetry out of a bad book, there was reason to hope that Brian De Palma could work wonders with "The Black Dahlia," his adaptation of Ellroy's 1987 novel. It gives me no pleasure to say that "The Black Dahlia" is a listless, surprisingly dispassionate picture: With the exception of a few scenes, there's something glassy and glazed about it. De Palma is, as always, attuned to craftsmanship -- this isn't a carelessly made movie, and the editing, by De Palma's longtime associate Bill Pankow, is characteristically crisp. But the picture never gets past a surface reading of the tragedy at the heart of the Black Dahlia murder case: The mystery of the lost girl who couldn't be saved should have been a natural for De Palma, but in only a few sequences does he allow himself to get close enough to touch it. Mostly, the picture is curiously detached. It's stylish in the De Palma mode, but not nearly as resonant as those of us who love him hoped it would be.

"The Black Dahlia" -- both book and movie -- is a work of fiction with a very real, and very famous, Hollywood murder case at its core: In 1947, the body of Elizabeth Short, a 22-year-old Massachusetts woman with a taste for men in uniform and a tendency to concoct elaborate fantasies about her love life, was found in a weedy empty lot. Her body had been bisected at the waist, disemboweled and drained of blood. Short had been beaten and tortured before her death, and her mouth had been slashed ear-to-ear into a ghoulish approximation of a grin.

In real life, Short's killer was never found, although Ellroy concocts an elaborate solution for the case (one that, incidentally, De Palma and screenwriter Josh Friedman fiddle with considerably). "The Black Dahlia" tells the story of the murdered woman, in spectral, ragged fragments, as it's seen through the eyes of two detectives investigating the case, the relatively green Bucky Bleichert (Josh Hartnett) and the considerably more seasoned Lee Blanchard (Aaron Eckhart, an interesting actor who comes off as surprisingly inert here). The two men become obsessed with the case (even though De Palma never quite clarifies the roots of Lee's obsession, in particular), trying to unravel the elusive threads of Elizabeth Short's last few days and weeks. Together and separately Lee and Bucky follow Elizabeth's trail from a lesbian nightclub she occasionally frequented, mostly to score free drinks (this occasions the movie's wittiest scene, featuring an elaborate floor show with k.d. lang as a tuxedo'ed crooner flanked by a chorus line of haughty, topless lovelies) to a bungalow she shared with other girls who, as she was, were hoping to break into movies. (The luscious Rose McGowan appears briefly as an ambitious movie extra kitted up in a dazzling Egyptian slave-girl costume.)

Even as their hunt for Short's killer brings them together, Lee and Bucky happen to be in love with the same (live) woman, platinum bombshell Kay Lake (an uncharacteristically stiff but dependably luminous Scarlett Johansson). And Bucky, in the course of unraveling the mystery, drifts into the clutches of rich-girl femme fatale Madeleine Linscott (Hilary Swank, in a mannered performance that's like a smudge on the screen). In one very strangely directed scene -- I wasn't sure if it was supposed to get the kind of laughs it drew at the screening I attended -- Bucky finds himself trapped at a Linscott family dinner presided over by Madeleine's eccentric captain-of-industry father (John Kavanagh) and her freakishly unbalanced mother (Fiona Shaw, a wonderful actress whose performance here is misguided and badly shaped).

The intent of "The Black Dahlia" feels wobbly and uncertain. The plot has been greatly streamlined from Ellroy's book, but even so, it isn't any clearer, and the ending, convoluted and barely believable, hits with a thud. It's easy to believe that each scene was conceived, shot and acted with a great deal of care, and yet the bits don't come together in the kind of exhilarating, challenging whole we expect from De Palma. For the most part, the characters' actions and feelings seem foggy, and Hartnett doesn't have the muscle to carry the picture: I often find Hartnett difficult to watch, not because he's a bad actor, but because I see him working so hard, and so humbly, toward being a good one. He has a sweet, receptive face: He's a good reflector of the feelings of the characters around him. But here he's the Roach Motel of actors: Feelings get in, but they don't get out. Hartnett tries to be expressive, but he comes off as blocked and helpless, and delivering the picture's tough-guy dialogue, particularly in the framing voice-overs, he's awkward to the point of sounding pained.

A few scenes are beautifully shot: Early in the picture, Lee and Bucky, who were both professional boxers before joining the force, get into the ring together for a police fundraiser. Cinematographer Vilmos Zsigmond keeps the action sharp and clear, and his burnished-bright lighting makes the bout look like a moving, breathing George Bellows' painting, "Dempsey and Firpo" come to life.

But the big problem with "The Black Dahlia" is that De Palma fixates too much on the detectives and not enough on the girl herself. I can only think that's because he can't bear to: The story of Elizabeth Short (what we can know of it), and her terrible end, are almost unbearable if you gaze on them too directly. The most powerful sections of the movie are several screen tests, used interstitially, that bring home this fictional Elizabeth Short's vulnerability and wiliness, and her desperation for fame and attention. She's played wonderfully by Mia Kirshner, and her fragility and toughness are teased out by the voice of the man -- the director, the voyeur -- behind the camera. We don't see that man, but we hear his voice, coaxing her into doing all the things an actress must do: For him, she becomes Scarlett O'Hara, declaring with actressy intensity that she'll never go hungry again; she tells the story of the death of one of her lovers, dissolving into tears and then brightening up, knowing that men like to be around a happy, cheerful girl, not a sad one.

The voice of the man behind the camera is De Palma's, as clear an admission as any I can think of that, as a filmmaker -- even one working nearly 60 years after her death -- he's complicit in Elizabeth Short's suffering, in the death of her dreams. These screen-test clips are the only places in the movie where De Palma comes close to the depth of feeling this material needs.

In the past 10 years or so, I've had more casual conversations than I can count in which I've had to defend De Palma against charges of misogyny, or claims that he's just a slick stylist who knows how to push buttons. De Palma does know how to push buttons, but I think what really enrages people is that he pushes buttons they didn't know they had. He also trusts us, his audience, to do the work of thinking and feeling, and sometimes, through no fault of his own, we balk at the responsibility. In his greatest pictures -- "Casualties of War" would be at the top, with "Blow Out" and "Carlito's Way" hovering nearby -- perhaps he's asking us to relinquish some of our pride as moviegoers, as bright people hip to the trickery of the movie arts, in order to reinforce our dignity as human beings. No wonder so many people hate him.

When I heard De Palma was adapting "The Black Dahlia," I was both nervous and excited: Nervous because I knew De Palma naysayers would fixate on the idea that of course he'd be attracted to this grisly murdered-girl material. Excited because I was sure that De Palma could locate, and give life to, all the heartbreak inherent in Elizabeth Short's story. So much of De Palma's work is driven by the pain of the hero who suffers because of his inability to save the girl. (In his flawed but gallant "Mission to Mars," it's the woman who can't save the man: The astronaut played by Connie Nielsen watches, simultaneously paralyzed in horror and electrified by love, as her husband, played by Tim Robbins, drifts out into space.) I've heard people call "Casualties" misogynist because in it a woman -- a Vietnamese girl named Tran Thi Oanh, played by the extraordinary Thuy Tu Le -- is raped and murdered, yet the movie isn't wholly about her experience. But Oanh's ghost haunts every frame. She isn't just a character in the movie. She is the movie.

Maybe I was expecting De Palma to make Elizabeth Short live for us in the same way. Almost everyone knows what the Black Dahlia was: A body found ravaged in a field, a woman who probably consorted with the wrong element and had to pay the price for it. But before the Black Dahlia was a body, she was a woman, and I was hoping De Palma would be able to restore some of her life to her. Elizabeth Short is a girl worth saving, and not even De Palma can.