Blythe Danner chews the scenery in this seriocomic tale of infidelity and early midlife crisis. Did someone say "Oscar"? 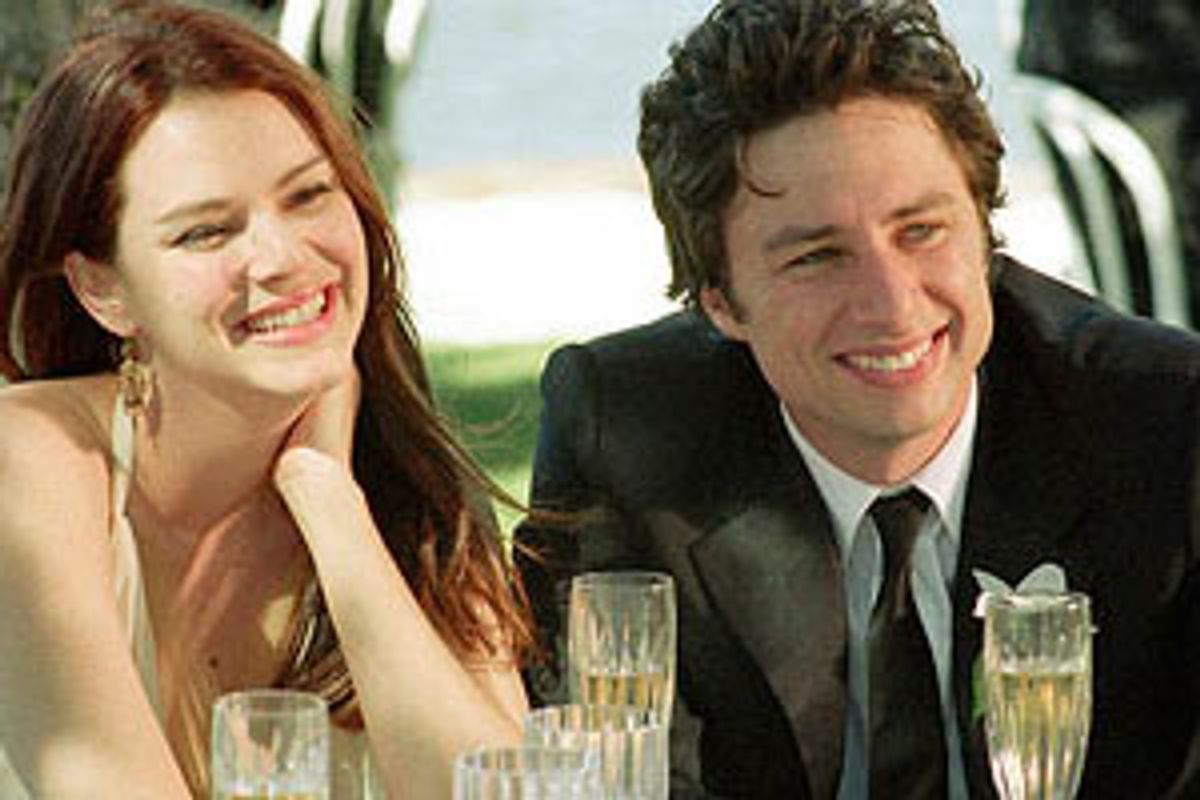 There's a friend of mine who doesn't like to see plays because, she says, they always have people yelling at each other and slamming doors. I'm telling her right now: Skip "The Last Kiss," which is one of those movies that's a lot like a play. But if you're OK with yelling and door slamming, along with bad decisions, painful confessions and difficult heart-to-heart talks between guys, this seriocomic tale of infidelity and early midlife crisis is a well-constructed example of that staple genre of the fall season, the prestige Hollywood ensemble drama.

This film certainly arrives with the appropriate pedigree: It's written by Paul Haggis, auteur of the multiple-Oscar-winning "Crash" (who was also nominated for his "Million Dollar Baby" script), and directed by Tony Goldwyn, the veteran actor and industry insider whose first film was the much lauded adultery drama "A Walk on the Moon," with Diane Lane and Viggo Mortensen as the too-hot coupling. Goldwyn isn't Ingmar Bergman or anything behind the camera, but he's economical and unfussy, and he knows how much rope to give his actors. Haggis may be in line for another Oscar nomination here; much as I disliked "Crash," the man has tremendous skills in structuring melodramatic narrative and sketching characters in a few broad, quirky strokes.

In adapting Italian filmmaker Gabriele Muccino's international hit (also called "The Last Kiss," at least in English), Haggis has stayed close to the spirit and characters of the original, trusting -- wisely, I think -- that the vagaries of middle-class arrested adolescence don't need much translation. Our central man-boy is Michael (Zach Braff), a Wisconsin architect about to turn 30 who is sent into a tailspin by the news that his live-in girlfriend, Jenna (Jacinda Barrett), is pregnant.

Braff has never impressed me as an actor of significant range, and he still doesn't. But this is a careful, subtle performance; he does a lot with a little. Considering what Michael does -- embark on a hot-and-heavy flirtation with a college-age gamine he meets at a friend's wedding -- it would have been easy to make the character a cliché of noncommittal jerkass dudeliness.

Instead, Braff plays Michael as a sweet and sensitive sleepwalker, dedicated to ignoring the consequences of his actions. He loves Jenna and he's excited by Kim (Rachel Bilson of "The O.C."), his new size-2 coed sweetheart. So what's the problem? If he avoids waking himself up and resists all efforts at introspection, he can bounce from one to the other without quite noticing that he's lying to both of them (and himself) and generally acting like a flaming asshole. I am sorry to report that this is a deadly accurate report on certain behavioral tropes in the human male.

Although Michael's struggles are front and center, this is a film about young men's faltering efforts to come of age, deliberately reminiscent of "Diner" (and accidentally reminiscent, perhaps, of the delirious "Old School"). Michael's buddy Chris (Casey Affleck) has just had a baby with his wife but is strongly considering bolting. (A fine performance, in an exceedingly painful subplot.) Izzy (Michael Weston) has been dumped by his high school sweetheart and wants to set out in an R.V. for South America. Blond surfer-god Kenny (Eric Christian Olsen) meets the perfect girl, a long-legged, no-strings sexual gymnast -- but she wants him to meet her parents!

Almost inevitably, the women's roles are a shade underwritten. But as it is throughout the cast, the acting is fine and even sensational. As Jenna, Barrett has to go from undisturbed domestic placidity to hurricane-force harridan at the flip of a switch (yelling and door slamming ensue). Like many women in her situation, Jenna engages in a little too much bile and self-pity, but Barrett makes us feel how the uncontrolled emotional currents running through her like electricity transcend any rationality. Bilson is surprisingly good as Kim, who is simultaneously the sexually forward younger woman of masculine lore and a vulnerable, romantic soul. (Sadly, she does not give Michael a copy of "Siddhartha," as the analogous character does in Muccino's film.)

But, hey. I've been holding out on you. If the purported center of the film is all the histrionics around the Michael-Jenna-Kim triangle, its real heart lies with Tom Wilkinson and Blythe Danner, as Jenna's parents. In the very first scene we begin to see how Danner will command the movie every second she's on-screen. Michael and Jenna come over for dinner to announce their "big news," which Anna (Danner) assumes means they're getting married. Completely flummoxed by the actual news -- a baby on the way but no ring -- Anna stumbles through the rest of the dinner with her hair sticking out on both sides like Sally Field's "Flying Nun" wings, supplying warm champagne and patting Michael on the head as if he were the family retriever.

Wilkinson's Stephen is a psychiatrist who's so monosyllabic and unemotional that we can't decide, for most of the movie, whether he's a chilly creepazoid or a wonderful husband and father. Anna is something else again. You can't say that Danner's acting is understated, but it ain't supposed to be. Anna is a later-life WASP mom on her 19th nervous breakdown, always ready to suck all the oxygen out of the room and burst into flame. If Jenna's a bit of a drama queen, she learned from the master. In directing everyone else's attention to her suffering, Anna does everything short of pulling her hair out by the roots or melting like the Wicked Witch of the West. Come to think of it, she does do that in one scene.

It's a scenery-munching, showboating performance but also a profoundly generous one. Anna's an impossibly self-absorbed person, but never small spirited or narrow minded. She loves her daughter and her husband as well as she can, after her own fashion, which is all any of us can ever manage. Danner will surely win an Oscar if enough people see this film, but the real point is that her stormy, erratic gender-bender Lear performance elevates "The Last Kiss" above a well-made genre drama.

Answering the question of whether Michael and Jenna will get past the Kim crisis and settle down with that forthcoming baby is just plot mechanics -- and not terribly interesting. But as Anna's meltdown demonstrates, people of all ages hurt each other in relationships. We can't help it, and most of us, most of the time, are coping with it, responding to it, taking responsibility for it or running away from it, as the case may be. "The Last Kiss" is more a capable-craftsman film than a work of genuine dramatic insight, but here and there it opens a window onto the terror and wonder of grown-up life, one its characters don't especially want to look through.