The GOP wants to see your I.D.

Anger and outrage lit up Congress Thursday, as Republicans defended their voter I.D. bill against charges it will suppress minority turnout. 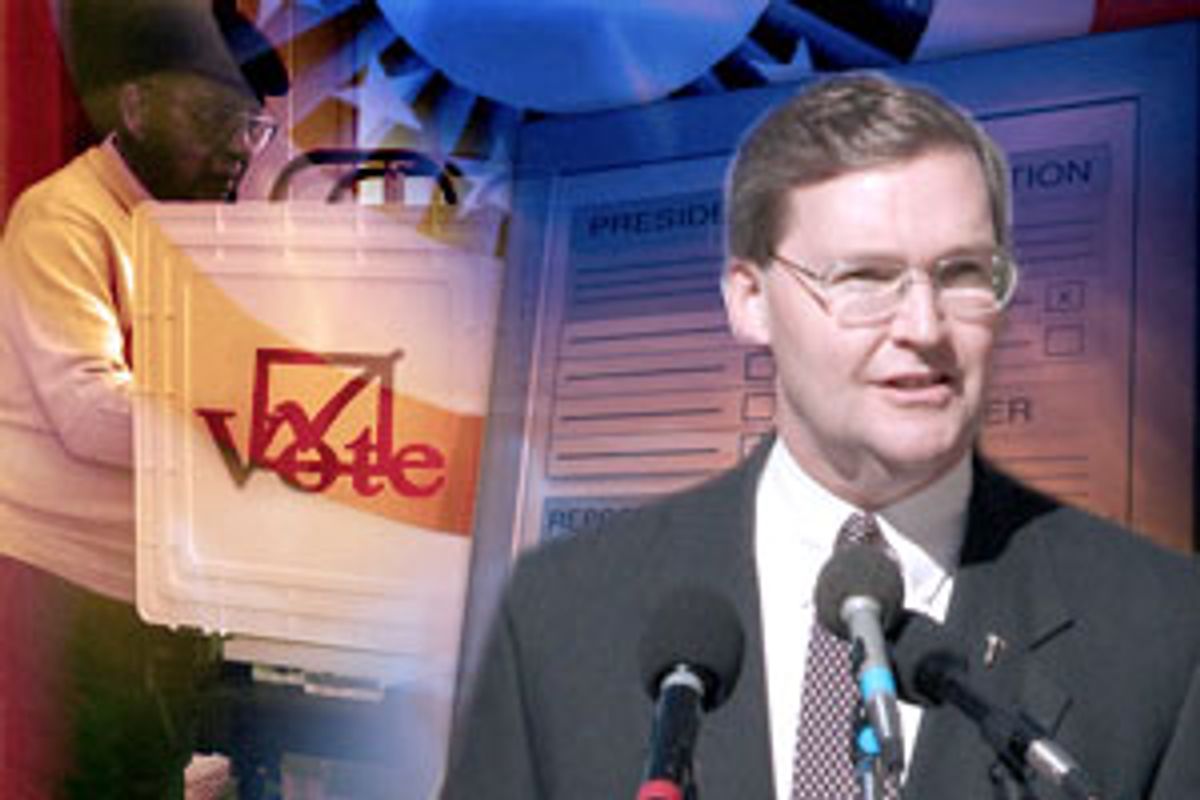 Rep. John Doolittle, a California Republican, was mad as hell and he wasn't going to take it anymore.

"It's outrageous to hear my colleagues sit there and say that the Republican Party is embarking on a move to suppress the vote of ethnic minorities throughout the country," he shouted Thursday at a meeting of the House Administration Committee. "That is blatantly false. I am not going to sit here and by my silence give any credence to that assertion. That's ridiculous."

The outburst was so remarkable that the ranking Democrat on the committee, a fellow Californian, couldn't resist prodding Doolittle a bit more. "Who is presenting the legislation here?" asked Rep. Juanita Millender-McDonald, who was speaking out of order.

That was, of course, a rhetorical question. For about an hour, the committee had been debating a GOP-sponsored bill that would require every voter in the nation to produce a government-issued photo I.D. to cast a ballot in federal elections. Most major civil rights organizations, from the NAACP to the National Council of La Raza, have said that the proposal will disproportionately prevent poor and minority citizens from voting. AARP, a nonpartisan lobby for the elderly, has cautioned that "many persons who are qualified to vote but do not have ready access to documents -- such as birth certificates, driver's licenses and passports -- that never have been deemed necessary in the past may lose the fundamental right to vote." Democrats have charged that Republicans are just trying to keep liberal voters from the polls.

Doolittle, for his part, had not been convinced by these claims. In fact, until he took the microphone, he appeared completely uninterested in the whole proceeding, choosing instead to carry on a side conversation with John Mica, a Republican representative from Florida. But now he was on a roll. "Let me tell you something: When we have fraud, it diminishes all of our right to vote," he shot back at Millender-McDonald, his voice growing even louder. "The incidents that I am aware of anecdotally are claims that there are urban situations where people have voted multiple times, which have been documented, and which have been on the Democrat side, not the Republicans."

Perhaps Doolittle had gone too far. He had begun his oratory by saying that Republicans held nothing against minority voters. Now he was suggesting that "urban situations," where minorities live in large numbers, were more prone to voter fraud, although, he said, "I will admit that sin spreads across both parties in terms of individual actions."

The debate was over by lunchtime. The Administration Committee voted along party lines to move the bill to the House floor just in time for an election year showdown next week. A similar bill has been introduced in the Senate, though no vote is planned.

Under the Republican proposal, all American voters will have to present valid government-issued photo identifications to vote in federal elections beginning in 2008. If voters do not have an I.D. handy on Election Day, they can cast a provisional ballot, but the ballot will be counted only if an actual photo I.D. is produced within 48 hours. The bill also provides federal money to provide free identification cards to any citizen who cannot afford the typical government processing fees.

Once it gets before the full House, the bill is sure to spark similarly inflamatory debate. Ever since the disputed 2000 presidential election, Republican and Democratic activists have been ratcheting up the rhetoric over issues of voter fraud and disenfranchisement. The protests include a broad swath of issues, from hackable electronic voting machines to draconian voter registration laws and the unequal distribution of polling places. But in this election year, Republicans have chosen to put forward only the voter I.D. bill, saying they are simply following one of many recommendations from the 2005 bipartisan Carter-Baker Commission on Federal Election Reform.

The truth is more nuanced. As voting rights advocates point out, the bill could affect traditionally liberal groups more than mainstream Republicans. Because ethnic minorities, students and seniors are less likely to possess photo I.D.s, they will be the ones hindered from voting or required to go the extra mile to attain a proper I.D.

The voter I.D. issue also has the advantage of appealing to conservative voter anger over illegal immigration, an issue that has divided Republicans in Congress and hurt them in public opinion polls. Earlier this summer, Southern California Democrat Francine Busby narrowly lost a special election for Congress after telling a largely Latino crowd, "You don't need papers for voting." Though she later apologized, her opponent, the Republican Brian Bilbray, charged that Busby was encouraging illegal immigrants to cast ballots.

Following this script, Republicans are sure to focus the debate next week on the issue of immigration. A vote against the bill, Republicans will likely charge, is a vote in favor of ballot fraud. "It seems we should all be able to agree that voting should be limited to citizens of the United States," said Michigan Rep. Vernon Ehlers, a relatively nonpartisan patrician who chairs the Administration Committee. "That has been the law for years."

But Democrats outside the interest groups point out that there are already laws on the books that make it a felony, punishable by up to five years in prison and deportation, for a noncitizen to vote in a federal election. In recent years, the Justice Department has prosecuted only handfuls of cases of voter fraud, and evidence of illegal immigrants casting ballots has surfaced only occasionally over the last several decades. As California Democratic Rep. Zoe Lofgren put it at Thursday's hearing: "Illegal aliens are sneaking across the border for a job, not to vote."

At the same time, there is scant historical data on how voter I.D. laws affect turnout. Federal data shows that about 91 percent of the voting age population has a state-issued driver's license, though other studies have shown economically disadvantaged Americans are more likely to lack photo identification.

Hans von Spakovsky, appointed by President Bush to the Federal Elections Commission, presented a paper to the Federalist Society on Wednesday that argued state I.D. laws had little impact on minority turnout, though his analysis was based on comparing turnouts in different election years. Eric Jaffe, a Washington lawyer at the Federalist Society who moderated the event, observed that arguments over voter turnout are perennially based on little more than anecdotes. "What always strikes me about these debates is the dearth of actual relevant evidence," he said.

In recent years, Missouri, Arizona and Georgia have passed laws requiring photo identification at the polls, prompting drawn-out court challenges in each case. (The number of states with some poll I.D. requirement grew from 11 in 2001 to 24 in 2005.) In September 2005, the Carter-Baker Commission recommended a federal voter I.D. law as a way to streamline the jumble of voting standards that now populate the nation. "There is no evidence of extensive fraud in U.S. elections or of multiple voting, but both occur, and it could affect the outcome of a close election," the commission concluded. "Our Commission is concerned that the different approaches to identification cards might prove to be a serious impediment to voting."

The commission's recommendations assumed, of course, that Congress would address the voter I.D. issue as part of a large-scale reform of the many electoral problems faced by the nation -- a list that includes the reinfranchisement of ex-felons, improved voting machine security and more inclusive voter registration procedures. At this point, however, no one should expect much more than shouting on the House floor to rally voters in November.