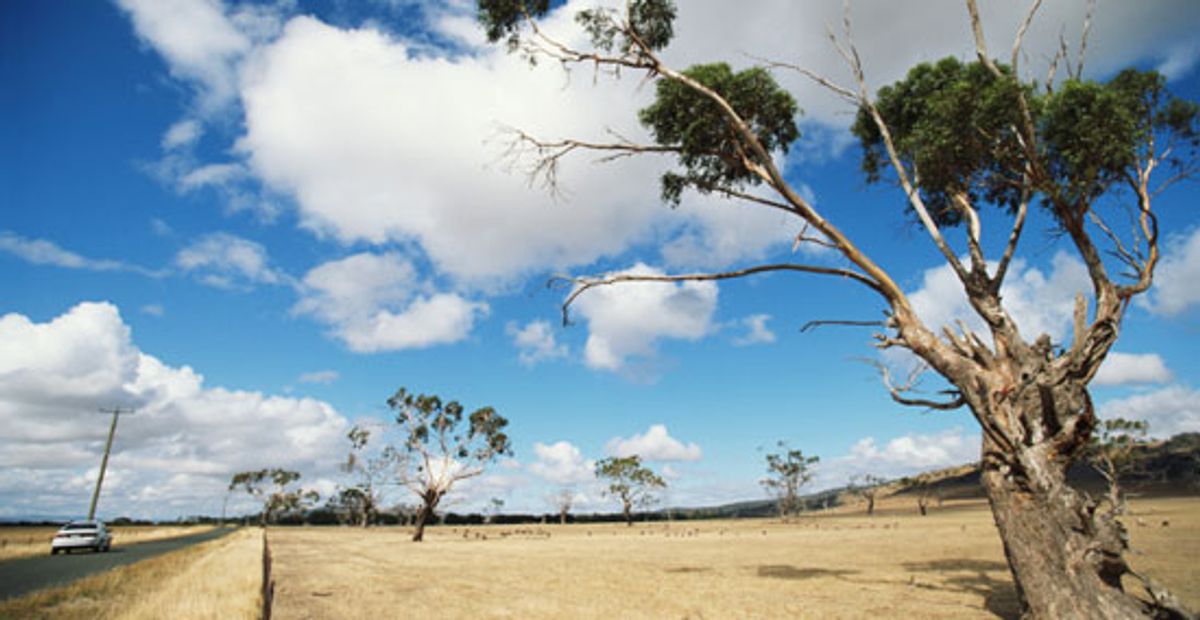 "Australians can't bear it that the outside world pays so little attention to them," writes British-American author Bill Bryson in "In a Sunburned Country," his 2001 travel memoir on Australia. This is true. While we're not often surprised that nobody knows that Canberra (not Sydney) is our nation's capital, Australians are interminably dealing with terrible, old jokes involving Paul Hogan, Foster's, kangaroos as transportation, and shrimp on the barbie -- not to mention constant incredulity that humans survive in a country teeming with poisonous snakes, spiders and sharp-toothed beasts.

In preparing a non-Australian for down under, it's also true that the best accompanying literature is that which risks reinforcing the cliché of Australia as the land of the wild, the dangerous and the empty. Our literary history is packed full of the stereotypes that Americans, at least, hold so dear. But, at its best, Australian literature manages to cut through the cliché and reveal some of what is at the core of our collective rough-as-guts personality.

Bryson's book does just that. His sweeping, wry reportage provides a cringingly accurate analysis of the fierce pride Australians have in our rugged, Neanderthal image. In Sydney, Bryson's guides -- a local reporter and photographer -- insist that Bryson must experience two great Australian pastimes: boogie boarding and playing the pokies. (Pokies is Australian for poker or slot machines, mate.) Boogie boarding, they explain, is when "you take a miniature surfboard and paddle out into the sea, where you catch a big wave and ride it back to shore. It's easy. You'll love it." Amid the silly account of Bryson's complete inability to do this, his guides' dismissive attitude toward the dangers involved prepares Bryson's readers for a culture as diligent in its frivolity as its geographical elements are extreme.

"What about the sharks?" Bryson asks. Noting that it has been "at least a couple of months" since a shark attack, the photographer concludes, "Sharks are way overrated as a danger. Way overrated. It's the rips that'll get yer," nonchalantly referring to the underwater currents that "often carry people out to sea."

Such curious stoicism is more seriously addressed in Jill Ker Conway's 1989 memoir, "The Road From Coorain," an earnest account of growing up in a rural part of New South Wales. The country's most populous state, it boasts Sydney as its capital, and spans a vast chunk of our famed, lush central-east coast (Bondi just one of its many legendary beaches) and then deep into the barren mainland, much of which is bush or desert. Conway writes intricate, intimate descriptions of the flat, crackling landscape: From the purple desert peas and "nut-flavored" grasses that thrive around the vital Murray River, she sweeps readers into "the dead heart of the country," where her family lives off the land, cultivating grain, breeding sheep and cattle, and silently hoping for rain.

Hard work governs Conway's childhood, broken up in "a good season" by rowdy dances in the closest town. In the prevailing low times, however, depression seeps in. Conway writes of an unspoken divide between her extraordinarily beautiful mother and proud, hardworking father, a schism that plays over and over in Australian literature: "It seemed flatter and more barren than any land [my mother] had ever seen. She saw no landmarks to identify directions, only emptiness. My father saw a strong fertile soil, indications of grazed-out saltbush, dips and changes in the contours of the land and its soils, landmarks of all kinds."

Conway makes the perfect travel companion: She is unsparing and sincere as she writes of her experience traveling from the country's desert through country towns and outer urban areas until she arrives with her mother in Sydney. The majority of Australians have never lived on this land, but many of us learn about it through Conway. She writes of a time that has passed, but the contrast she conveys between urban and rural, bush and city, is as stark now as then and as essential to the contemporary Australian experience.

The death of her father when Conway is 11 is the impetus for her move from the country -- he dies while fixing a pump that might water the family's withering flock of sheep. It's as wrenching a story as Peter Carey's epic and audacious novel "True History of the Kelly Gang" (2000), which begins: "I lost my own father at 12 yr. of age and know what it is to be raised on lies and silences my dear daughter." The book, which was an international bestseller, imagines the life of infamous bushranger Ned Kelly, perhaps the most celebrated (real) figure in all of Australian history -- picture Jesse James, Paul Bunyan and Paul Revere rolled into one. Carey, one of our most celebrated authors, infuses Kelly with such wit and empathy that his book reads as much as a tempestuous coming-of-age tale as an opinionated retelling of a fraught and crucial time in Australian history.

In an unpunctuated, uneducated Australian Irish, Kelly narrates his feral upbringing at the hands of his poor, foul-tempered Irish parents as well as his first childhood crimes. "Within the year I would of learned to kill a beast very smart and clean and have its hide off and drying in the sun before you could say Jack Robertson but on this 1st occasion I failed to find the artery," narrates young Ned of his first killing of a neighbor's fat heifer. Later, as an adult, Kelly's beautifully wrought vernacular whirls readers through dusty locations like Benalla, Euroa and Stringy Bark Creek, all of which lie in the eucalyptus-thick bushland between Canberra and Melbourne. Kelly was hunted through this terrain by mounted (English) police until the final, fiery showdown at Glenrowan, about 150 miles north of Melbourne. Here, in 1880, Kelly's outlaw status came to an end and his legend as an icon of rebellion began.

Many days' drive west along vast stretches of highway and rough, rugged coast sits Perth, a sparse, flat, tree-studded city that lies between the long, buttery beaches along the Indian Ocean and the low, sprawling hills of the Darling Ranges. Said to be the most isolated city in the world, Perth and its surrounding coastal and country towns provide the backdrop for most of Tim Winton's novels, the best of which is "Dirt Music" (2001), a slow, seething domestic drama set in a small, well-to-do fishing village. Georgie is a privileged, edgy ex-nurse and city girl, married to the town's star fisherman. She reads literature and binge-drinks and -- when she decides to end her monotony and hitchhike out of town -- meets Lu, a hunky musician with a sad past. The book conveys an insidious hopelessness even in the midst of remarkable natural beauty -- "sun-torched surfaces," quaint and quiet dirt roads and steady, open water. People with nicknames like Fox and Bird and Darkie drink themselves to unnecessary deaths or float for days across the thick blue of the ocean. Winton's choppy, rhythmic language captures the flowing and convoluted pace of western Australian life: "The grey sand was hot underfoot and the afternoon sun roasted the back of her neck until they came to a grove of tuarts whose shade and pad of fallen litter offered some relief."

But all this despair is not limited to the wild open spaces. Andrew McGahan's "Praise" (1998) plays out in the suburban living rooms and skanky beds of winterless Brisbane, the capital of Queensland on the northeast coast, home to surfers and indie rockers alike. Here, lanky Gordon Buchanan drinks beer (Tooheys, not Foster's), and smokes, and fucks his nymphomaniac girl, Cynthia, who has a rotten case of excema. The pair work in the bottle shop (liquor store), when they can make it there. Gordon drives a 1970s Holden Kingswood -- a beast of a car so legendary in status that Andy Warhol, had he been Australian, would have used it instead of a Brillo box. Cynthia is ever threatening to leave Gordon and follow her parents hundreds of miles north to the tropical city of Darwin. McGahan is our Denis Johnson; Gordon Buchanan our dulled-down, overdeveloped narrator of urban substance-fueled woes, and the book moves with the raw, dry tone American audiences might recognize from Australian films like "Lantana" and "Little Fish" (or indeed, the film version of "Praise" itself).

It's hardly a surprise, then, that Bryson found us "an extraordinarily self-critical people" with a bizarrely pessimistic outlook. "You encounter it constantly ... a nagging conviction that no matter how good things are in Australia, they are bound to be better elsewhere," he writes. None of which matches up with our extraordinary contribution of talent to Hollywood or our reckless romance with nature. Or does it? Either way, both sides of Australia are there for you, our dear cousins -- the dusty old men, the barbecued prawns and the occasional crocodile fight. Leave it to the non-Australian to bring it home: "Maidens' long bar was lined from end to end with sun-leathered men in shorts and sweat-stained muscle shirts and wide-brimmed hats," Bryson writes of visiting one country town pub. "It was like stepping in to a Paul Hogan movie. This was more like it."

Books The Literary Guide To The World