The first-term Illinois senator lit up the party faithful in Iowa, igniting much speculation and securing his status as an alternative to Hillary Clinton. 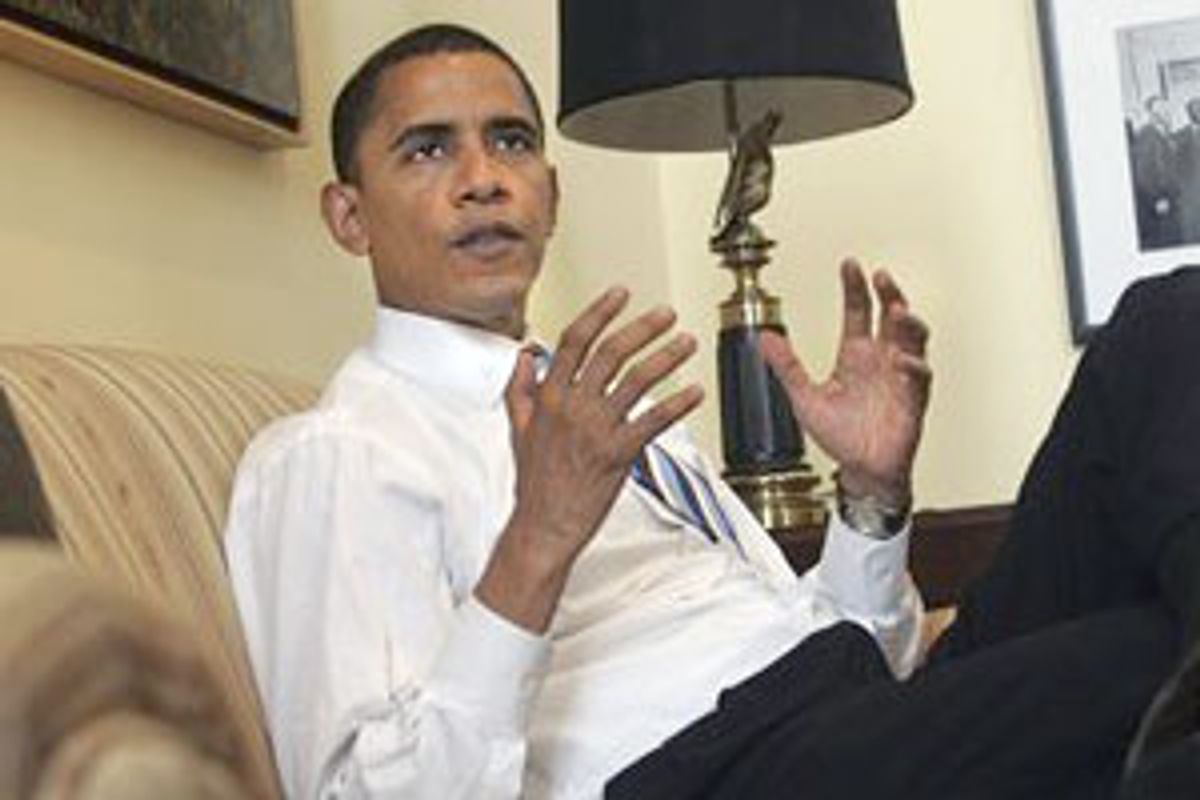 Barack Obama made a speech Thursday night in Louisville, Ky., before 5,000 cheering Democrats, and he got little more than a nice write-up in the Louisville Courier-Journal. Obama made a similar speech here Sunday afternoon to 3,000 party activists at the biggest event on the Iowa Democratic calendar -- and the electric response among the press was that the first-term Illinois senator is all but running for president in 2008.

Sixteen months before the opening-gun 2008 Iowa caucuses, Obama has replaced Al Gore as the season's most beguiling -- yet probably unattainable -- alternative to Hillary Clinton. His rapturous return last month to Kenya, the land of his father's birth, underscored that Obama is truly the ranking African-American politician. But no transatlantic journey could match the symbolism of Obama's quick flight Sunday across the Mississippi to serve as the star attraction at Iowa Sen. Tom Harkin's annual steak fry.

Despite a threat of thunderstorms, Sunday was one of those sparkling late-summer days when Iowa lives up to every fantasy fostered by "The Field of Dreams" and "The Bridges of Madison County." From the church-social feel of the food tent to the joyous lilt of "Happy Days Are Here Again" when Harkin and Obama were first introduced, the steak fry was a prime example of the good-natured retro politics at which Iowa excels.

Standing on an outdoor stage decorated with pumpkins and bales of hay, Obama mocked the Bush administration's policies without ever resorting to the shrill invective that has become a staple of partisan rhetoric. "I've had enough of using terrorism as a wedge issue," Obama declared forcefully, before shifting to a lighter tone. "I don't know about you, but the war against terrorism isn't supposed to crop up just between September and November in even-numbered years. That seems to be the pattern. There is a sudden burst of activity, a sudden urgency, three months before an election."

For the most part, there was little new in Obama's speech, since the nearly 40-minute address, which he delivered without referring to notes, was mostly an artful pastiche of earlier rhetoric. Some of the anecdotes were powerful, such as Obama's encounter with a 105-year-old black woman at a campaign rally during his 2004 Senate race. What was striking through much of the speech was not what the fledgling senator said but the fierce attention that Obama inspired from the audience. The faces in the crowd radiated a rapt intensity that you see in patriotic movies from the 1930s and 1940s but rarely in real life. If there is ever an eye-contact primary, put your money on Obama.

A political picnic, by its nature, is an occasion to echo the views of the audience rather than to challenge their preconceptions. In other venues, Obama is capable of playing a political iconoclast. In a provocative speech in June, the senator sharply criticized "liberals who dismiss religion in the public square as inherently irrational or intolerant, insisting on a caricature of religious Americans that paints them as fanatical." But the furthest Obama ventured from Democratic boilerplate Sunday was a Clinton-esque riff about how "we don't want government to solve all our problems. But what we do want is government to help."

Nothing in the speech -- save perhaps for a coy "I'm going to have to come back to Iowa again" -- did much to unravel whether Obama will have the temerity or the moxie to jump into the 2008 presidential race little more than two years after he was first elected to national office. The senator is certainly taking far more rhetorical pains than, say, Gore to keep his options open. Obama's disavowal of interest in 2008 seems more Swiss-cheese-esque than Sherman-esque. Like other reporters granted similar brief interviews Sunday, I tried to pin Obama down and instead got the beginning of the putative candidate's standard wind-up-toy answer: "I was asked the day after I was elected and I said that I was not running. Two years later, nothing has changed my mind. But you never know. The world is --" At this point I broke in to ask, "You mean things can change?" Obama replied surprisingly directly, "Yeah, things can change."

It is easy to come up with contingencies that could change Obama's mind, from Hillary Clinton deciding to stay in the Senate (a seismic event that would transform the Democratic landscape) to a growing "Run, Barack, Run!" groundswell (the senator will publish his second autobiography, "The Audacity of Hope," next month) to a void opening up if, say, the Democratic front-runner stumbles badly late next year.

What surprised me as I talked to random Iowans at the steak fry, though, was a palpable worry that Obama might lose his gilt-edged glow if he sought the nomination too soon in his career. Two years after his stirring keynote address at the convention in Boston, many Democrats already regard Obama as the greatest natural talent in the post-Clinton party. As Iowa attorney general Tom Miller said to me shortly after Obama left the stage, "A great speech. You can't beat charisma."

When an almost equally junior senator named John Edwards was debating whether to run for president in 2004 or seek reelection to the Senate and save the White House dreams for another year, one of the most potent questions raised by his political advisors was, "What are you going to learn with four more years in the Senate that you don't know now?"

It is a provocative question -- and one that Obama may be privately wrestling with now. But for the moment, Obama appears to be thinking about short-term matters. Like planning on returning to Iowa in the coming weeks ostensibly to campaign for a Democratic congressional candidate. And if Obama makes a few new friends on that trip, why, he would merely be keeping his options open.