The most scabrous critique of Bush's education policy isn't coming from a think tank or newspaper but from the grittiest drama on television, "The Wire." 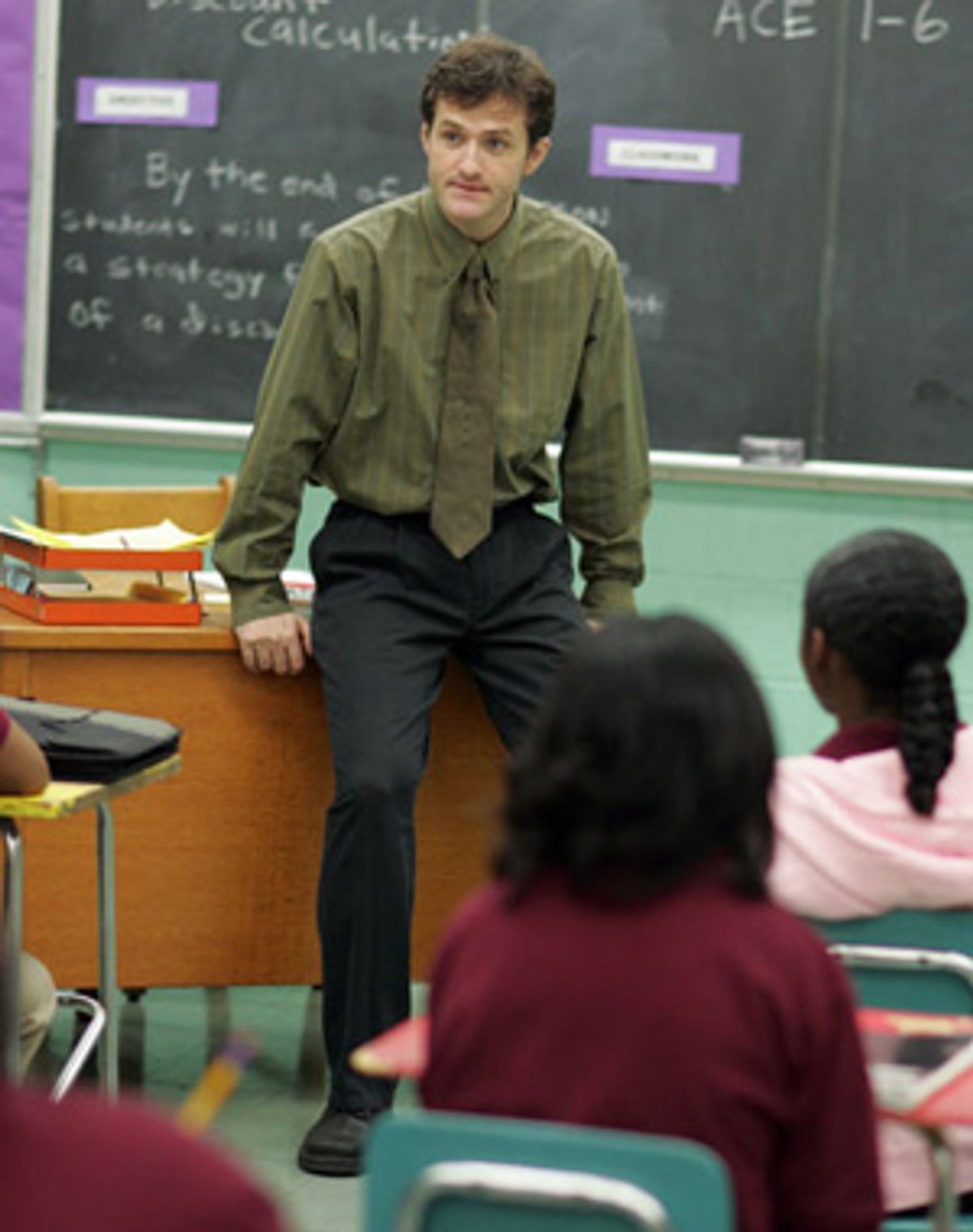 Early in the superb new season of HBO's "The Wire," Roland "Prez" Pryzbylewski, disgraced cop turned rookie math teacher at Edward J. Tilghman Middle School in Baltimore, attends a meeting with several veteran teachers. Fans of "The Wire" already know Prez's back story as a perennial fuck-up who turned out to be a surprisingly gifted investigator of the drug trade's paper trail, but who in the end had no instinct for the street; his police career ended last season when he accidentally shot and killed a black undercover cop. Now he's the new guy in the teacher's lounge, sitting on a hard chair in an overlit room with three gimlet-eyed women.

"Keep your windows closed," one advises him about the hard-case students he hasn't even met yet. "Makes 'em drowsy, and drowsy's good."

"Build in lots of activities in your lesson plan," says another. "You keep them busy, you keep them off guard."

As the three women file out, the camera lingers on poor, stunned Prez (the excellent Jim True-Frost), and you can see he's already wondering if he might be better off back with the violent young hoppers on the drug corners of West Baltimore. Built into this scene is a good deal of verisimilitude. Informed by the experiences of producer Ed Burns -- who, like Pryzbylewski, was both a detective and a schoolteacher in Baltimore -- "The Wire" is taking on the crisis in urban public education, the same way it has in previous seasons examined such highly charged issues as the futility of the "war on drugs," the institutional corruption in the police department, and the slow strangulation of the industrial working class, from a political point of view best described as Old Testament liberal in its rage for social justice.

We all know the Stations of the Cross for the inspirational-teacher film by now: the naive young teacher's disastrous first class; the staff meeting that devolves into a bitch session about unruly students, pointless paperwork and the idiotic directives of the administration; the embittered veteran teacher condescending to the idealistic rookie in the teacher's lounge; a climactic confrontation that either threatens violence or delivers it; and a final, tear-jerking moment of redemption as the teach finally reaches the kids. Some of these moments show up even in "The Wire," but it has ever been the collective genius of the show's writers to reinvent stock situations and characters through brilliant storytelling and a pointed intelligence. What's remarkable about the new season of "The Wire" is how they modify and transcend these tropes to deliver a passionate and remarkably detailed and incisive critique of public education in the era of No Child Left Behind.

Thus, in Episode 3 of "The Wire," written by the novelist Richard Price, we get a sly reference to the story's genealogy as Ms. Donnelly, the school's unflappable assistant principal, barks, "Don't go up the down staircase," at the stampede of kids on the first day, and Prez's canonically disastrous first class that same day vividly recalls Sandy Dennis' in the 1967 film "Up the Down Staircase." But then in Episode 4, "The Wire" ventures into more politically charged territory with the return of the formidable Robert Wisdom as Howard "Bunny" Colvin, the veteran police commander who last season trashed his 30-year career by, in effect, legalizing the drug trade in certain neighborhoods of his district, in an ambitious and finally disastrous plan. This season he teams up with a nebbishy academic to try something similar at Prez's school, namely separating "the corner kids" (the ones already implicated in the drug trade) from "the stoop kids" (the ones who still obey their parents and teachers). Colvin argues that the regular classes will be able to learn now that the mouthiest kids are gone, and the corner kids will get extra attention from a special program devoted solely to socializing them. Right from the start, the administration is skeptical.

"Isn't this just tracking?" asks one administrator, invoking the discredited educational strategy of segregating students by aptitude and (by implication) likelihood of success. To which Colvin replies -- just as he replied last season when he was asked if he wasn't just legalizing drugs -- So what? Kids are going to learn something, somewhere, so why not teach them what they need to know in school, instead of holding them to a standard they cannot possibly hope to meet? The scheme is tentatively approved, but the administrator tells Colvin and the professor not to "do anything that makes us look bad." At first, Colvin's experiment shows good results, as the corner kids slowly learn that there's more to social interaction than fight or flight and Pryzbylewski's classroom calms enough to allow his native intelligence and decency to work on his students -- allow him, in the parlance of "The Wire," to show some flex. He makes progress by improvising a curriculum, teaching his kids probability, for example, by letting them play dice in class, a game they know from the corner. Then a couple of obstacles are thrown in his path, one institutional and one sociological, bringing the show to the crux of its diagnosis of what ails the urban school system.

The institutional obstacle is the No Child Left Behind policy. With the approach of the annual, NCLB-mandated Maryland State Assessment test, Pryzbylewski's hard-won progress stalls as he's forced not only to teach to the test -- basically giving the kids the answers in advance -- but even to turn his math class into an English class for a time, to improve the school's low language arts scores. In the meantime Colvin's kids, who are only just learning to say "please" and "thank you" and not to call each other "bitch" and "motherfucker," are forced to take the same test, for which they are not, and cannot realistically be, prepared. It becomes clear that the school has more to gain by simply "disappearing" these hopeless students (aided by a creative truant policy that only requires offenders to show up one day a month) than by trying to teach them anything.

With NCLB coming up for renewal next year, I'm not sure what it says about the debate on education that the sharpest and most high-profile critique I've seen or read comes from a brilliantly foul-mouthed HBO series about cops and drug dealers that's grittier than all the "CSIs" put together. There's no denying the visceral power of the show's indictment, as we see the pedagogically deadening effect of "teaching to the test" scathingly dramatized, as the kids who were giddily learning probability the week before now slump comatose at their desks as Prez coaches them instead in bullshit test-taking strategies. Even more scathing is the show's continuing indictment of a bureaucracy's imperative to cover its own ass, in this case the school's yielding to the temptation to corrupt the test results in its favor.

"We're just juking the stats," says Pryzbylewski, comparing the massaging of the test scores to the police practice of downgrading crimes (from rape to assault, for example) in order to lower the official crime rate. If this seems overly cynical, consider the recent report in the Washington Post that revealed that Maryland's own assessment showed that 82 percent of its fourth graders were proficient in reading, while the National Assessment of Educational Progress, known as the NAEP test, showed only 32 percent proficiency. Forget "Law and Order"; it's "The Wire" that's ripped from the headlines.

The other obstacle in the path of a serious education, though, has nothing to do with laws or policy initiatives: It's simply the irresistible pressure, and pull, of the corner on the lives of these kids. In one memorable scene in "Up the Down Staircase," an experienced teacher walks Sandy Dennis down an especially scary block near their school and tells her, of their students, "This is where they spend 18 hours a day, and we have them for six. Almost insurmountable odds, 18 to six." "The Wire" is a brilliant sermon on this scripture, dramatizing the corrosive effect of the street on four young boys, whose intertwined stories, in a series full of heartbreak, are the most poignant and harrowing in the history of the show. Together they recall the story of the doomed young drug runner Wallace from Season 1, and multiply it by four. One kid, Dukie, hides his books and clothes so that his family won't sell them for drug money; Michael becomes the fiercely protective de facto parent to his younger brother; Namond, the son of imprisoned Barksdale lieutenant Wee-Bay, is bullied by his horrific mother into the family business; and the impish Randy, who has a gift for entrepreneurship, is pressured by both police and school officials into snitching on his peers, an extremely dangerous pursuit in the world of "The Wire."

These interwoven stories stitch together the show's other, equally riveting plotlines -- the ongoing investigation of the murderous drug kingpin Marlo Stanfield and the mayoral campaign of the white city councilman Tommy Carcetti -- into a wholesale critique not just of cynical education policy, but of a political culture unable to rescue generation after generation of children. Even without the boondoggle of NCLB, Simon and his colleagues are saying, the schools face insurmountable odds when the street is an ineradicable presence in the classroom, and the classroom has a negligible effect on the street. Fixing education, in other words, will take more than just fixing education policy.

Characters on "The Wire" -- and perhaps their writers -- have consistently demonstrated little respect for anybody, cop or teacher, who works above the level of the street, and little respect for airy theories of law enforcement or education, let alone underfunded federal mandates. Indeed, in the working-class aesthetic of "The Wire," the more hands-on you are, the more honorable you're likely to be, and the further you are from the street, the more likely you are to succumb to inertia or corruption or both. By showing Pryzbylewski, in a later episode, quietly intervening in the life of one of the four boys, the show suggests that the heart of education will always be a one-on-one interaction between teacher and student, regardless of the political or institutional context.

Sad to say, the things that were wrong with the high school in "Up the Down Staircase" 40 years ago are the same things that are wrong with the middle schools here, especially in "The Wire": too many kids with too little hope; too few teachers with too little pay and too much to do; and an underfunded, bureaucratically top-heavy system tacitly willing to give up on kids from the wrong neighborhoods in order to juke the stats. On top of these perennial problems, No Child Left Behind, in "The Wire's" scabrous critique, is a vicious joke, preparing the very kids it's ostensibly designed to help for nothing in particular, and even, in practice, leaving behind the most difficult students because they fuck up the test results. One of the plotlines in "The Wire" resolves finally with an individual act of charity straight out of "Oliver Twist" -- not that there's anything wrong with that, necessarily, but it's a helluva thing to see tough-minded liberals giving up on any hope of institutional reform. Dickens is the novelist most often cited as the model for "The Wire's" scope and complexity, and for the show's intensity for social justice. Pryzbylewski's teaching craps and Bunny Colvin's ad hoc social engineering are better than nothing, but they don't solve the larger problems. Rescue one kid, and that still leaves all the others out there, banging on their corners, with no hope and not even much of a life expectancy. Even Dickens himself would have to say, in the redolent patois of the corner boys, that shit ain't right.