It may be naive, but Bill Clinton's initiative to solve the planet's biggest problems is raising the prospect of a world where America can lead again. 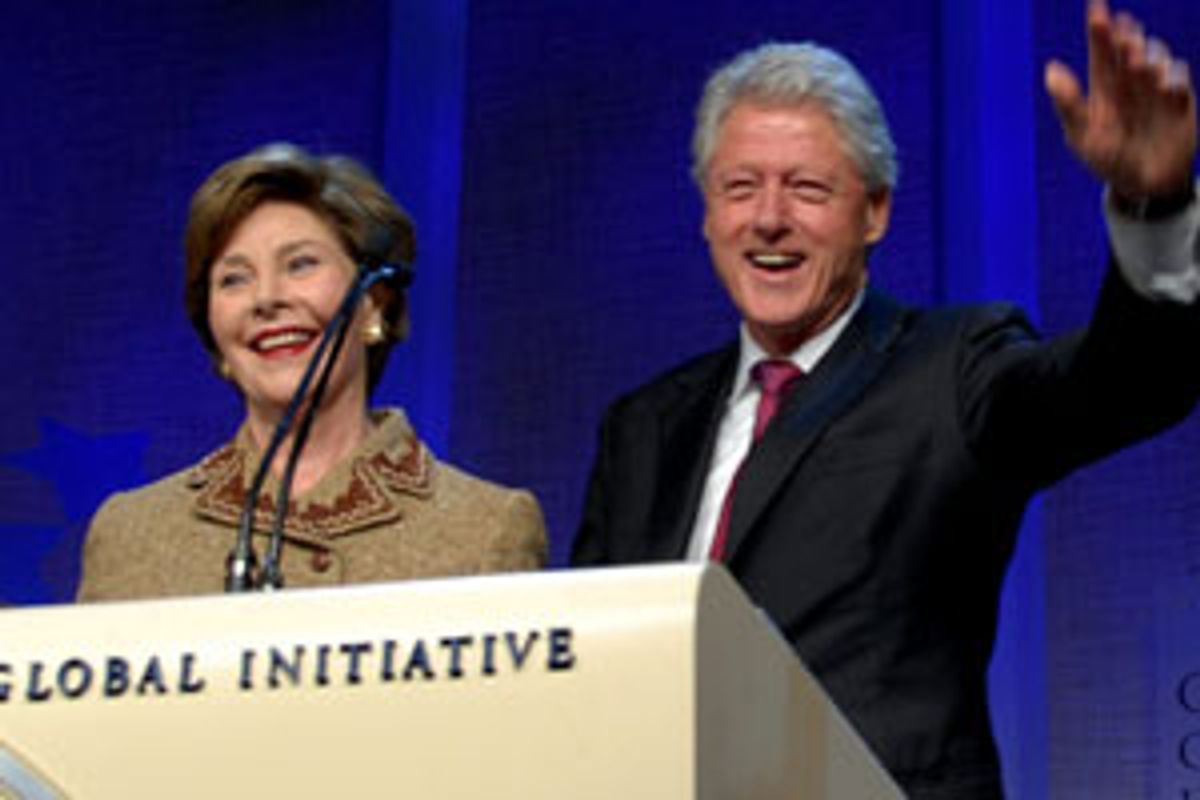 On Wednesday morning, the Clinton Global Initiative commenced its second annual meeting in New York with a speech by Laura Bush, whose public approval ratings are much higher and more durable than those of her husband (or anyone else in the Bush administration aside from Condoleezza Rice).

With her game attempt to prove that the government of George W. Bush is engaging the world with compassion and creativity, she earned the standing ovation that greeted her. And in the spirit of the initiative, which seeks a "commitment" to improve the planet from every participant, Mrs. Bush concluded her remarks by announcing a $16 million plan to provide thousands of African villages with "play pumps" -- clever merry-go-round devices that use the energy of children to pump clean water.

Standing beside her were former AOL chairman Steve Case, whose family foundation will pay to implement the project, and of course Bill Clinton himself -- the impresario and visionary whose foundation's goals merely include alleviating poverty, disease, and religious and ethnic conflict while cooling off global warming. It was hard to blame the former president for being so obviously pleased by the gracious presence of Mrs. Bush, even if he has always been a little too eager to get along with his political foes.

But the deeper truth is that Clinton's tireless worldwide outreach to the business, nonprofit and government sectors -- many of whose most important players showed up for the second CGI gathering this week -- represents a profound rebuke to the policies and priorities of the Bush administration. That became obvious on the morning after the first lady's appearance, when Clinton introduced Richard Branson to make an extraordinary promise. Over the next 10 years, Virgin Airlines and Virgin Rail will devote all corporate profits, estimated at $3 billion, to research and investment in technologies that have the potential to mitigate global warming.

In the Bush White House, meanwhile, they still prefer to do nothing about climate change -- which Al Gore passionately described as this generation's most important project when he spoke at CGI a few hours after Branson's press conference (during which the British entrepreneur incidentally credited the former vice president for persuading him to make such an enormous commitment). The contrast between the energy and ambition of the Clinton initiative, which mobilizes money and people behind great causes, and the blind stagnation of the Republican government, which does nothing while the world literally burns, could not be more telling.

It isn't that Clinton is about to change the world tomorrow. Indeed, the global initiative's $6 billion worth of commitments (including Branson's) won't go very far in a sweltering, suffering world of 6 billion souls, more than half of whom are destitute, sick or both. Its emphasis on public-private partnerships, on doing well by doing good, may entrust too much to the corporate sector. And its determination to bring everybody together, regardless of differences in ideology and power, may be naive.

For his part, Clinton prefers to stress the most concrete achievements of his foundation and its remarkable roster of partners, who range from Nobel Peace Prize winner Wangari Maathai of Kenya and British chancellor Gordon Brown to Rupert Murdoch, Barbra Streisand, and literally thousands of activists and entrepreneurs on the ground. By the second day of this year's conference, thanks to Branson and dozens of others, the CGI had more than doubled last year's commitments of $2.5 billion; by the conclusion on Friday afternoon, they will no doubt amount to considerably more.

Yet the former president is insistently articulating an alternative to Washington's dominant right-wing worldview -- and raising the prospect of a world where America can lead again, with regained prestige and government competence. Whether intentionally or not, he is demonstrating what world leadership really means.

It is possible, although he would probably resist the idea, that the symbolic value of his conference is even greater than those huge dollar totals. At a time when American government seems oblivious or worse toward human need and environmental peril, the former president is raising the standard of practical compassion and challenging the priorities of conservatism. The message of CGI is that things can change and that ordinary people can act -- and that they should expect governments, corporations and institutions of every kind to act, too.

What may come next is a plan to involve thousands or even millions of people at the grass roots. Not long before this year's CGI convened, Clinton invited more than a dozen of the most prominent progressive bloggers to a luncheon meeting in his Harlem, N.Y., offices. What some perceived as an attempt to mollify his wife's Internet critics may have had a broader purpose. The former president, never especially adept with computers, wants to understand the magic of the netroots.

"I'd like to make CGI a global movement that engages all citizens, in their own way, to commit to make a lasting change in the world," he told me on Thursday afternoon. "Individuals have the power to do extraordinary things if given the opportunity." He imagines the future of his global initiative as "an eBay of ideas, where we bring together people with ideas with those who have the means to bring those ideas to life. Anyone can make a commitment, large or small, and make a difference. This is my vision for CGI, to be a vehicle for this and serve as a means for all people to commit to make this a better world for our children."

Such a movement would serve not only as a forum for a new kind of global civic activism but could wield unprecedented political power as well -- to demand that governments around the world cooperate and use their resources to end poverty and preserve the planet, at long last.