The Virginia Republican denies using the "N-word," but two additional sources say he did. 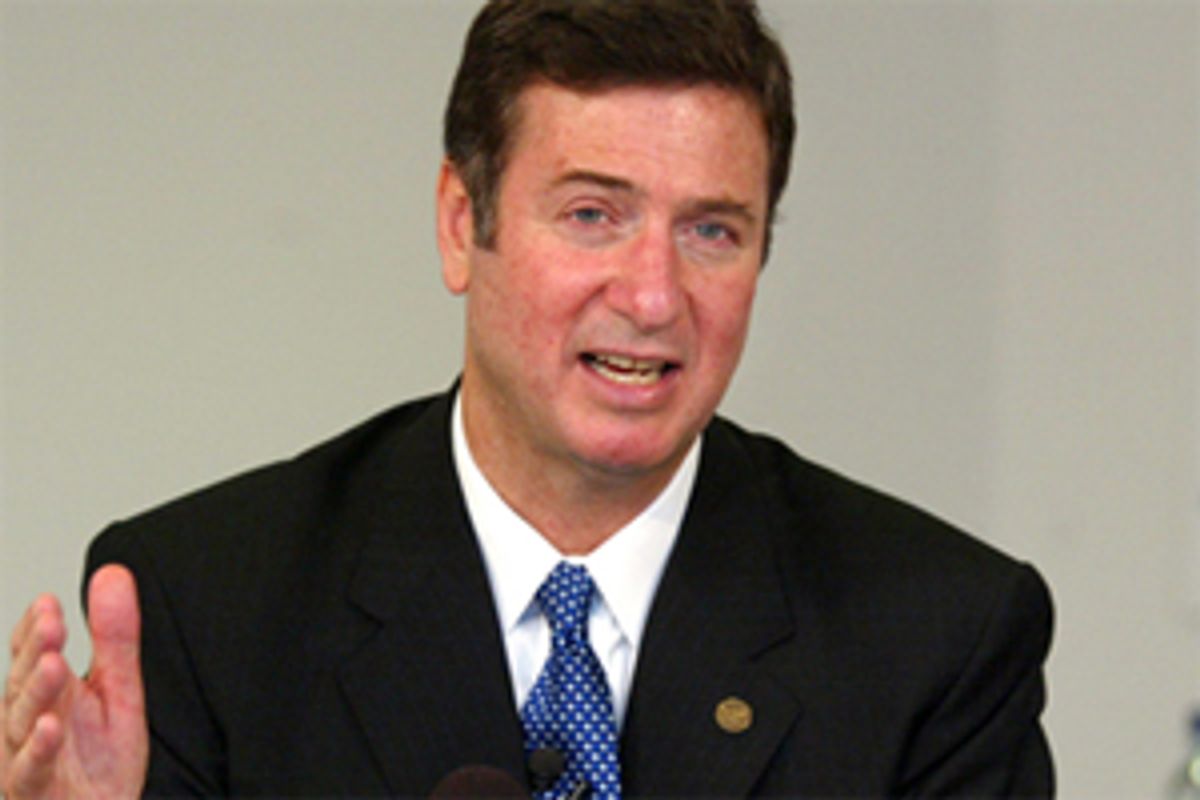 Sen. George Allen on Monday morning vigorously denied the claims made in a Salon article by three of his former University of Virginia football teammates that he used a racial epithet and demonstrated racist behavior during college.

"Let me say this again very clearly so no one can misunderstand this," the Virginia Republican said at a press conference in Richmond, Va., according to the Daily Press of Newport News, Va. "These allegations and this story ... are false."

The Washington Post quoted Allen calling the claims in the Salon article of one former teammate, Ken Shelton, "absolutely false," "pure fabrication" and "nonsense." According to the Post, Allen said the "N-word" was not a part of his vocabulary. "It wasn't then. It hasn't been since. And it is not now," the senator said.

But within hours, two more former acquaintances of Allen's had come forward to claim that they knew Allen had uttered the word "nigger." The New York Times, the New Republic and the Post reported that Christopher Taylor, an anthropology professor in Alabama, said Allen used the word in the early 1980s when Taylor visited a pond near Allen's then home in Virginia. Taylor told the news outlets that Allen had spoken of turtles in the pond, saying, "Around here" the only people who "eat 'em" are black, whom Allen described using the racial epithet.

Ryan Lizza at the New Republic reported that Taylor had recounted this exchange in an Aug. 17 e-mail to another academic anthropologist at the University of Virginia. Taylor told Lizza that he identifies as a Democrat and opposes Allen's reelection. But Taylor added that he never intended for his e-mail to become public.

Allen political consultant Chris LaCivita told the Post that Taylor was lying. "This guy is not credible period," LaCivita said. The Times and the Post reported that Allen's wife at the time, Anne Waddell, confirmed Taylor's visit to their property, but said Allen would never use such racially insensitive terms.

In a separate event, Larry Sabato, one of the most quoted political scientists in the country, appeared on MSNBC's "Hardball With Chris Matthews," where he claimed to know that Allen had used the racial epithet. "I'm simply going to stay with what I know is the case, and the fact is, he did use the N-word, whether he's denying it or not," said Sabato, who was Allen's classmate at the University of Virginia, where he now runs the Center for Politics. Sabato did not initially elaborate on the source of his knowledge. But when contacted by Salon Monday night, Sabato said the source was distinct from Taylor and Shelton, a North Carolina radiologist.

On Sunday, Salon reported that Shelton said he remembered several incidents of Allen's racist behavior during their college days, in addition to Allen's use of the epithet. Shelton said Allen told him that he preferred Virginia to California because "blacks knew their place" in Virginia. He said Allen gave him the nickname "Wizard" because Shelton shared a last name with Robert Shelton, who served in the 1960s as the imperial wizard of the United Klans of America, a group affiliated with the Ku Klux Klan. Shelton also said he watched Allen put a severed deer head into a mailbox that Allen believed to be owned by a black resident of a rural area of Virginia.

Two other former teammates of Allen, who asked not to be named out of fear of retribution, also told Salon that Allen had used the racial epithet and displayed racist behavior in college. Salon interviewed 16 other teammates and college friends of Allen's who did not recall Allen displaying racist views in college, though two of those teammates remember having concerns about Allen's exhibition of the Confederate flag.

Before the latest two revelations on Monday, the Allen campaign put out a press release with the accounts of four former college football teammates of Allen's and a former football team trainer. The trainer and two other teammates claimed that Shelton had received the nickname "Wizard" only because of his athletic abilities. All four of the teammates said they had never known Allen to use racial slurs or demonstrate racial intolerance.

One of the teammates in the press release, Doug Jones, is listed on the Virginia Republican Party Web site as the "Unit Operations Co-Chair for the Allen campaign in Fairfax County." When Allen was the governor of Virginia, he appointed a second teammate cited in the press release, Charles M. Hale Jr., to the Virginia Board of Mining Examiners, according to state records. As governor, Allen also gave an appointment to the wife of George Korte, a third teammate in the press release. According to state records, Allen appointed Holly Korte to the Virginia Board of Social Services. And he appointed Joe Gieck, the former trainer, to the Governor's Commission on Physical Fitness and Sports.

Also on Monday, the National Republican Senatorial Committee put out a press release attacking Salon and its Washington correspondent for running the story. Committee spokesman Dan Ronayne described the teammates' recollections in the Salon article as "scurrilous charges."

In an article that appeared in Tuesday editions, the Post reported that its reporters had contacted two former University of Virginia athletes, who spoke on condition of anonymity, saying they feared the effect of coming forward on their livelihoods and families. Both athletes told the Post that they recalled Allen frequently using racial epithets in college.