"The Last King of Scotland" 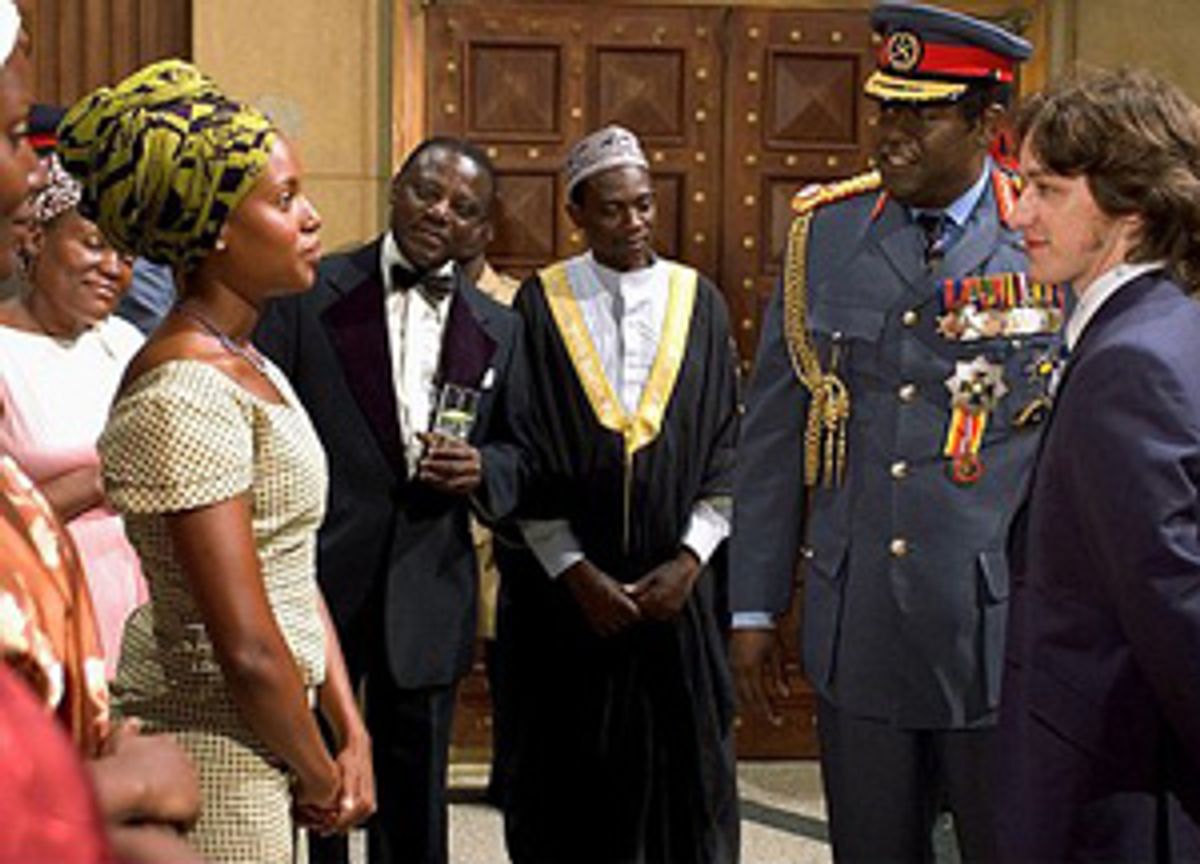 For Westerners, accounts of the terrible acts perpetrated by foreign dictators often have a faraway, horror fairy-tale quality: Even if we can reckon with the basic notion of unspeakable evil, our conception of how a human being can get away with such atrocities is usually more abstract.

In Kevin Macdonald's "The Last King of Scotland," a fictional story set against the nightmare-real backdrop of 1970s Uganda, Forest Whitaker shatters abstraction and replaces it with flesh, blood and unspeakable charm. Whitaker plays Ugandan dictator Idi Amin, who seized power in a 1971 coup and began a murderous reign, fueled by his own delusions and paranoia, that flourished until he was ousted in 1979. Amin, who professed admiration for both Hitler and Stalin, kidnapped and killed citizens who posed even the slightest imagined threat to him; he set up an interrogation and torture headquarters in a Kampala hotel; in 1972, he expelled the country's considerable Indian and Pakistani population -- remnants, in his eyes, of British colonialism -- claiming to have received instructions from God in a dream. To reinforce his supremacy, he bestowed outlandish titles on himself, like "Lord of All the Beasts of the Earth and Fishes of the Sea," and the possibly even wilder "King of Scotland," a moniker born of his peculiar affinity for that country.

"The Last King of Scotland," based on Giles Foden's 1998 novel, begins as a comedy and ends up a bad dream, a cautionary tale about the dark corners into which political -- and youthful -- naiveté can lead you. Nicholas Garrigan (James McAvoy) is a young Scottish doctor who hightails it out of his homeland as soon as he gets his medical degree, driven partly by a thirst for adventure but maybe more by anywhere-but-here restlessness. (From his bedroom in the stifling family home, he twirls the globe, vowing to move to the first country he hits with his finger: That turns out to be Canada, so he spins again -- Uganda it is.)

Even at the beginning of his bumptious adventure, Nicholas' principles are never in doubt: He takes a post at a medical mission run by a harried but ferociously dedicated Dr. Merritt (Adam Kotz) and his wife, Sarah (Gillian Anderson, who, in a very small role, conveys a woman whose altruistic gravity is grazed with just a touch of loopiness). Nicholas quickly falls into step at his new job, instantly warming to his Ugandan patients even as he recognizes that everything he can do to help -- many of the locals put more trust in witch doctors than in the medical kind -- is never going to be enough.

And then one day, simply by being in the wrong place at the right time, Nicholas ends up treating the country's new leader, Idi Amin, for a minor injury. (The scene is staged, and played, with a sharp comic terseness that foreshadows the movie's gradual darkening.) The affable Amin is so impressed with Nicholas' take-no-guff demeanor that he offers the doctor a post as his personal physician, an offer that Nicholas accepts somewhat impulsively, treating the appointment as just another square on the game board of his grand adventure. In no time, he has become the dictator's trusted confidant.

We see, of course, where all this is headed, but Macdonald segues with impressive grace into the story's more sinister territory. This is Macdonald's first fiction feature -- his previous credits include the 2003 mountain-climbing documentary "Touching the Void" and the 1999 "One Day in September," about the 1972 Munich hostage tragedy -- and he seems to be in almost complete control of the material and its pacing. (Jeremy Brock, Peter Morgan and Joe Penhall wrote the script, adapted from Foden's novel.) Macdonald does lose his footing late in the picture, fixating too graphically on a few instances of torture and dismemberment: Sometimes what you don't show is more horrifying than what you do, and Macdonald hasn't figured out how to traverse that line.

But Macdonald and his actors do understand the way people and landscapes can work magic on us, both white magic and the darker kind. Nicholas is understandably delighted when Amin gives him a Mercedes to tool around in (he allows himself only a vague awareness of the dictator's henchmen, who are always lurking nearby with their rifles). But what delights him, and us, even more is a lilting version of "Loch Lomond" sung in his honor by Amin's gathered subjects, dressed in colorful, decidedly un-Scottish costumes. (Amin presides over this wild scene in a kilt.) The singers are accompanied by African drums and Scottish pipes, and the result is weird and beautiful, as graceful and as odd as a three-legged cat. McAvoy -- who played Mr. Tumnus, the faun, in "The Chronicles of Narnia" -- makes Nicholas so likable that we're able to forgive him for being snowed by the charisma, and the largesse, of the treacherous Amin. He's a wholly sympathetic naif: We stick by him even when we want to shake him (as when he allows himself to slip into an entanglement with one of Amin's wives, played by the superb Kerry Washington).

Much of the picture was shot on location in Uganda, and Macdonald and his cinematographer, Anthony Dod Mantle, use the locales with supreme effectiveness, showing us a sunny paradise with suffering and terror lurking just beyond the gates. But the greatest embodiment of those contradictions lies within Whitaker himself. This is a wonderful, horrifying performance: Whitaker doesn't take the easy way out by playing Amin as a killer clown, a treacherous buffoon. Amin might have been crazy, but Whitaker -- at the beginning of the movie, though not the end -- teases out threads of believable sanity and charisma. This is how dictators get away with murder: by wielding personal charm like a mace.

Whitaker vests Amin with winking intelligence: We see him constantly reading the people around him. He allows them to amuse him even as he's calculating what he might be able to get out of them. Whitaker's Amin is shaped like a bear, so seemingly harmless with his quaint, rolling walk, his chest puffed out of his general's uniform as if the gold buttons marching down can barely contain his inflated ego. What kind of harm could this rotund, congenial fellow possibly do? Whitaker doesn't shy away from that question, and the answer he gives us is like a bullet to the gut. The character of Nicholas is a fictional one, or, rather, a composite: Foden based him on a number of real people who were part of Amin's inner circle (and who were lucky enough to escape). But Whitaker's Amin is bitterly real. When Amin addresses the citizens of his country, telling them with super-size confidence, "I will wear the uniform of a general. But in my heart, I am a simple man, like you. I am you," he's not telling a lie. Whitaker's Amin does know what's in their hearts. It's his greatest weapon, and he'll be sure to use it against them.