As Democrats scramble to protect detainee rights and their own congressional futures, President Bush is angling for a star-spangled signing ceremony just before the midterm elections. The rush is "very political," says Sen. Dianne Feinstein -- and will likely succeed 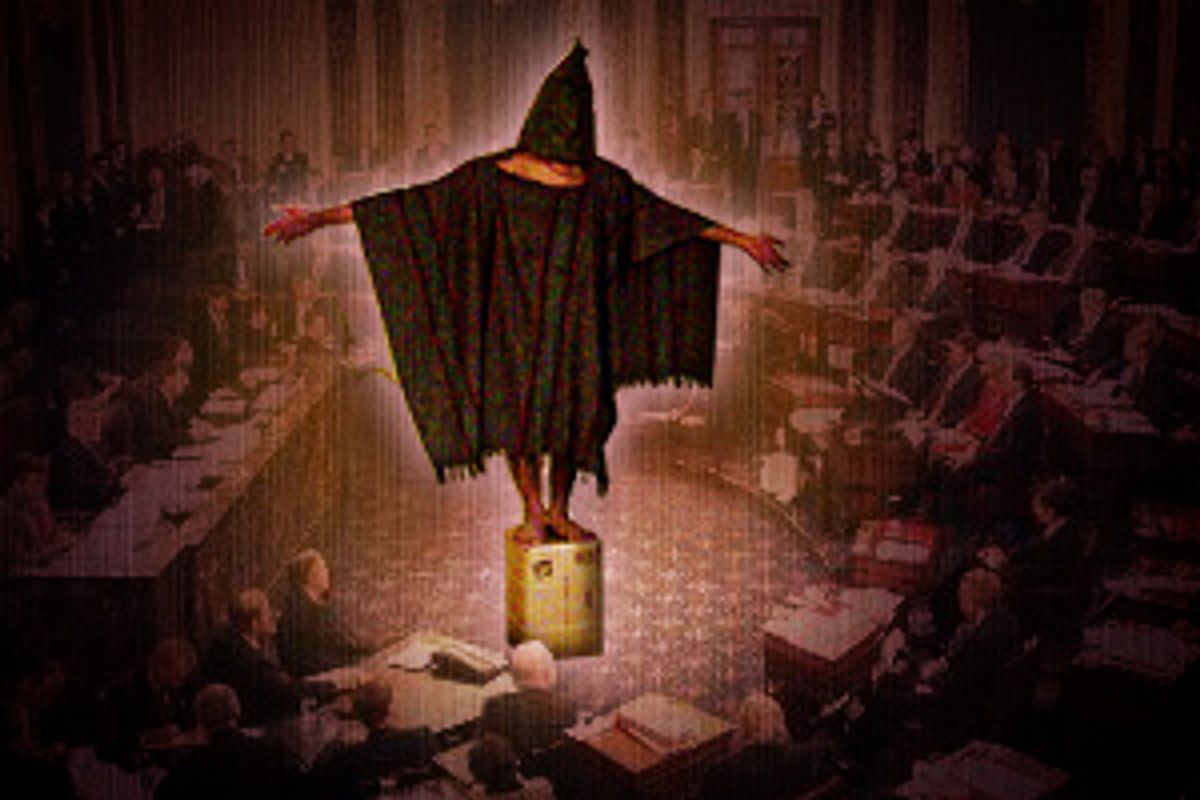 The Republican Congress Wednesday moved to the cusp of passing landmark legislation to broaden the definition of "enemy combatants" in America's global "war on terror" and to eliminate the right of all detainees to have judicial review of their incarceration. With George W. Bush eager for a star-spangled signing ceremony as Congress adjourns this week for the election season, the House approved the administration bill by a 253-168 margin, while the Senate was expected Thursday to reject the last four amendments standing in the way of passage.

The legislation, which was prompted by a June Supreme Court decision applying the Geneva Conventions to prisoners held by U.S. forces, had originally provoked a well-publicized struggle over placing legal limits on interrogation techniques. While a White House effort to redefine the anti-torture provisions of the Geneva Conventions was largely rebuffed by a recent bipartisan Senate rebellion, the compromise that three Republican senators negotiated with Bush officials included provisions eliminating the right of habeas corpus for all detainees.

"This provision would perpetuate the indefinite detention of hundreds of individuals against whom the government has brought no charges and presented no evidence, without any recourse to justice whatsoever," Vermont Democrat Patrick Leahy declared at the start of Wednesday's Senate debate. "This is un-American. It is unconstitutional and it is contrary to American interests." Congressional critics argued that, coupled with an expanded definition of "enemy combatant," the legislation would permit the government to indefinitely imprison any non-citizen -- including a long-time resident of the United States who holds a green card -- without review by the courts

Despite the far-reaching implications of the legislation, the Senate galleries were virtually empty throughout the day, while most news coverage treated the congressional debate as of far more transient importance than the recent television confrontation between Bill Clinton and Fox TV host Chris Wallace. Many legislators had only a shaky understanding of what was in the Senate bill since its provisions were still being revised, after consultation with the White House, Tuesday night. As California Democratic Sen. Dianne Feinstein complained in a Tuesday interview, "I don't understand this rush other than to make it very political. This is a huge thing that our people are going to have to live by ... It is important not only that it works, but that it also be just."

The Bush administration has argued that legislation is urgently needed because the June Supreme Court decision in Hamdan v. Rumsfeld had invalidated the proposed military tribunals to try the detainees at Guantánamo Bay, Cuba. Yet the need for haste was belied by the reality that it would take months for any trials to begin because, among other things under the legislation, the Defense Department would have to appoint judges and establish a new Court of Military Commission Review. As Scott Silliman, a law professor at Duke University who specializes in national-security litigation, put it, "This thing is so spiked with politics. The rush is purely political and for no other reason."

Congressional Democrats were clearly skittish about the implications of their votes on the detainee legislation so close to the November elections. While the party mustered 160 votes against the legislation in the House, there were prominent defections among those facing tough races. Among those Democrats voting with the GOP majority were Ohio Senate candidate Sherrod Brown (normally one of the most reliably liberal members of the House), Tennessee Senate contender Harold Ford, as well as imperiled House incumbents Leonard Boswell (Iowa) and Melissa Bean (Illinois).

Senate Minority Leader Harry Reid had originally agreed Wednesday to a schedule that would have so truncated debate that all amendments would have been considered in one day. After Leahy publicly objected, the vote on four of the amendments and final passage was delayed until Thursday. In the only Senate vote Wednesday -- to substitute an earlier version of the legislation (approved by a bipartisan Armed Services Committee majority before being watered down in negotiations with the White House) -- Reid managed to hold virtually the entire Democratic caucus together. But the amendment failed when it attracted only one Republican supporter, Rhode Island moderate Lincoln Chafee, who is facing a difficult reelection fight.

But Leahy was clearly frustrated by the white-flag mood among some Senate Democrats. As he said in an interview, "In my own caucus, people say, 'We can't oppose this, look what happened to Max Cleland.'" (A Vietnam veteran confined to a wheelchair because of war wounds, Cleland, a Georgia senator, was defeated by GOP attacks ads in 2002 because he had supported a Democratic filibuster delaying the establishment of the Department of Homeland Security). Leahy recounted that his weak-kneed Democratic colleagues also argue, "'We have to go along with it because we'll never be able to explain it back home.'" That prompted the Vermont senator to add, "Maybe one way to explain it is to say, 'I stood up for you and your rights.'"

One way that rights will be eroded by the bill is through a change in the meaning of the legal term "enemy combatant." Current Pentagon regulations describe an enemy combatant as anyone who "engages in acts" against the United States. The new legislation would broaden that to also include anyone who "has purposely and materially supported hostilities" against America. And to add a further note of confusion, elsewhere in the bill an enemy combatant is defined in circular fashion as anyone so designated by a new Defense Department entity, the Combatant Status Review Tribunal.

Defending this accordion-like definition on the Senate floor, South Carolina Republican Lindsey Graham -- one of the three Senate Republicans who negotiated with the White House -- said, "I am firmly in the camp that when it comes to determining who an enemy of the United States is -- who has taken up arms and presents a threat to the nation -- that is not something that judges have been trained to do, nor should they be doing. That is something our military should do."

Many of the provisions of the legislation are so new or so murkily drafted that legal experts and human-rights advocates have not reached a consensus about their implications. There is considerable debate, for example, about whether the bill's treatment of the Geneva Conventions would permit the CIA to continue such notorious interrogation techniques as waterboarding. There also remains some question whether it might be permissible under the bill to declare an American citizen an "enemy combatant," thereby stripping him of any access to the courts. Graham and other Republican senators stoutly denied this possibility during Wednesday's debate.

The Senate's rush to judgment underscores the dangers of negotiating with the Bush administration once the White House takes an extreme position. The three GOP dealmakers (Graham, John McCain and Senate Armed Service Committee chairman John Warner) succeeded in their effort to get the president to retreat from his deliberate attempt to eviscerate the Geneva Conventions and undermine the Supreme Court decision in the Hamdan case. The Senate Republican troika were aided in their headline-making efforts to outlaw torture by an army of former military lawyers and such high-profile recruits as former Secretary of State Colin Powell.

But history may judge this to be a Pyrrhic victory. In exchange, the White House was allowed to blatantly rewrite the pending legislation in regard to habeas corpus and the definition of enemy combatants. This time around, amid the mind-numbing blur of end-of-session legislative maneuvers, these aggressive efforts by the administration to be allowed to hold detainees for years (and even maybe decades) without judicial review has provoked only dutiful resistance from most congressional Democrats and a so-what shrug from the press and the public.