Democrats are poised to pick up a U.S. House seat in Arizona. Can Republican Randy Graf stop them by exploiting voters' fears of illegal immigrants? 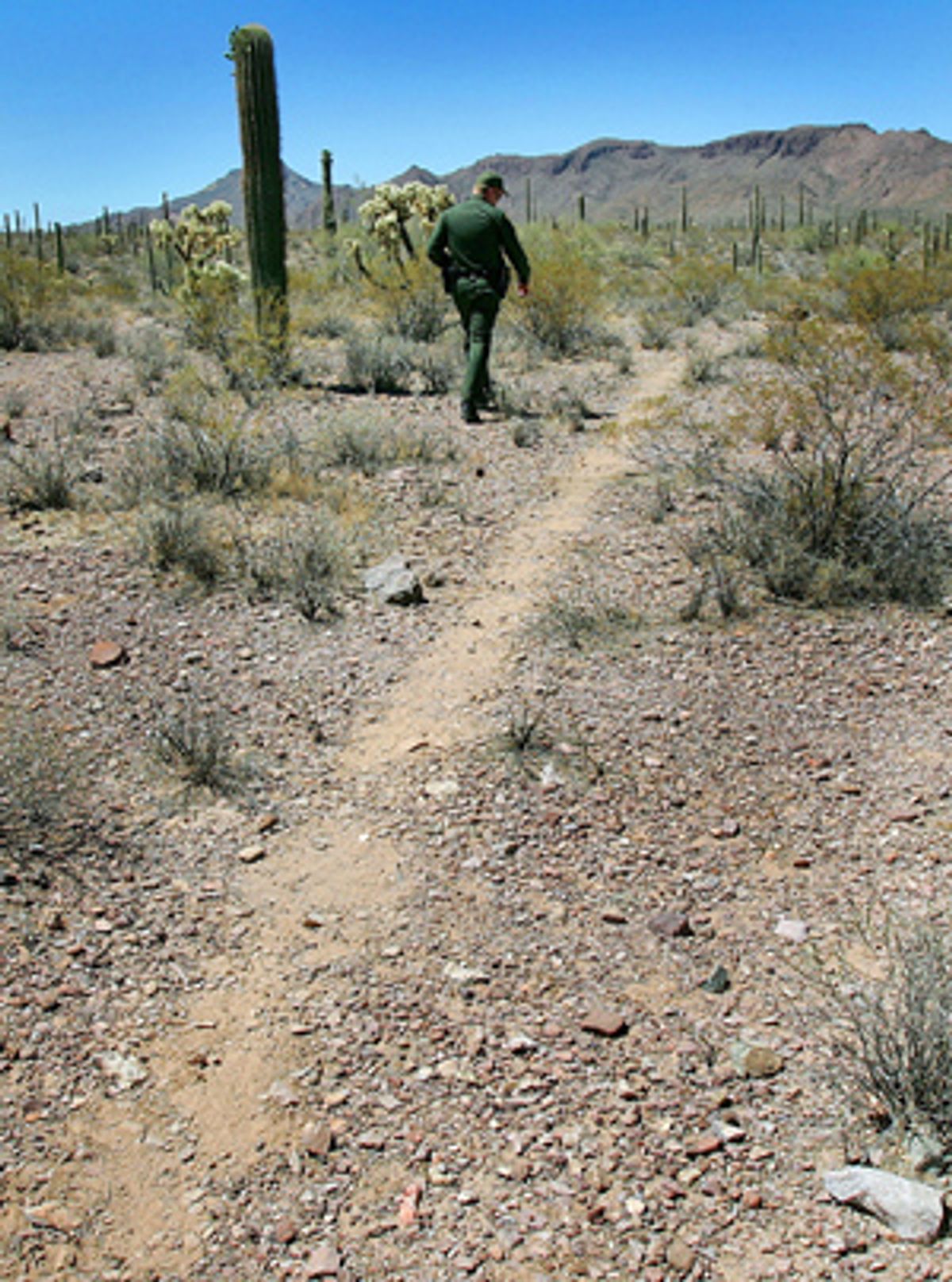 In mid-September, much to the dismay of moderate Republicans, staunch conservative Randy Graf emerged as the GOP candidate in a key congressional race in Arizona. Graf won a bruising five-way primary for the right to challenge Democrat Gabrielle Giffords for the seat to be vacated by Jim Kolbe, a moderate Republican who represents Arizona's 8th Congressional District. The race between Graf and Giffords is one of a handful that may determine whether Republicans or Democrats control the U.S. House of Representatives after elections this November.

Graf is a former golf pro who favors cowboy boots and plainspoken slogans like "principles over politics." Formerly a state lawmaker, he once backed a failed bill that would have allowed Arizonans to carry guns into bars and restaurants. He has been a member since its inception of the Minuteman Civil Defense Corps, a border-monitoring group intent on stopping illegal immigrants. He hews to the far right on social issues from abortion to gay marriage to stem-cell research.

But if Graf is hanging his political hopes on any one issue, it's immigration, where he is an unabashed hard-liner. Arizona's 8th District -- home to some 141,000 Republicans, 121,000 Democrats and 95,000 independents -- stretches from liberal-leaning Tucson to conservative strongholds along the U.S.-Mexican border. A primary entry point for illegal immigrants, the region is a political flash point for increasingly concerned Arizonans.

Kolbe's retirement has given Democrats the opportunity to pick up a seat in their bid to take back the House, with Giffords running well ahead of Graf. According to a poll released Sunday by the Tucson Weekly, conducted in late September by veteran Republican pollster Margaret Kenski, Giffords had the support of 52 percent of voters, versus 34 percent for Graf. Those numbers include a significant GOP crossover -- only 62 percent of the Republicans said they would be voting for Graf. And independents were favoring Giffords over Graf 55 percent to 20 percent.

But with five weeks to go, Graf is betting that his hard-line stance on immigration can boost his chances to win the race, which may be a bellwether not only for control of the House, but also for an issue that has sparked nationwide protests and sharp debate in Washington for many months. While the latest poll shows Giffords beating Graf on a range of issues from healthcare to Social Security reform, voters were evenly split on one point: which candidate could be more trusted to handle border security. Graf's campaign will test anew the power of immigration to galvanize voters in Arizona, one of several swing states in the western United States whose residents are increasingly moderate on social issues while maintaining strongly conservative views on taxes, issues of law and order, and immigration.

Immigration reform has faded as a top issue in Congress, as plans for legislation stalled months ago in part due to GOP infighting between moderates and hard-liners. But it remains a top priority for voters across southern Arizona, according to several recent polls.

Graf is now emphasizing an array of perils he says are rising from the south. In an interview with Salon, Graf said his campaign is "about securing this border to stop the drugs, terrorism, the human tragedy of people dying in the desert, and the influx of three or four or five million illegal aliens a year who are just walking across the border."

Graf scoffs at any proposal to grant legal status to illegal immigrants already working inside the country. He says he wants the border sealed shut and that he would deport the estimated 12 million illegals now living and working in America.

Moderates on immigration, including Giffords, contend that deportation would be costly and impractical. But Graf brushes those criticisms aside, arguing that if the government cracks down on businesses that employ illegal immigrants, and denies those immigrants benefits, millions of them will pack up and "self-deport" to their home countries.

Both candidates know that Arizona voters' fears and frustrations about immigration have been mounting. After the federal government began tightening border security in California and Texas in the mid-1990s, migrants flooded Arizona, exacting a toll on the region. Border crossings in the harsh desert terrain are treacherous; a federal report estimated that more than 200 illegal entrants died in 2005 alone while crossing into the U.S. Border Patrol's Tucson Sector.

Struggling migrants have left behind mounds of trash in the desert, cut through fences around ranches in Cochise County, and overwhelmed rural hospitals, pushing some of them to the edge of bankruptcy. More recently, the so-called coyotes who smuggle immigrants in from Mexico have become increasingly desperate and violent, leaving some border residents fearing for their lives.

Patrick McKenzie, a 75-year-old retired federal worker who said he switched from voting Republican to voting Democratic during the Clinton years, said he'll be voting for Graf this year. "I think it's about time that somebody started doing something for us taxpayers, especially in Arizona," said McKenzie, who lives in San Manuel, a small town north of Tucson. "Let's face it, Mexico is not our friend. They're taking everything from us."

Mercedes Maharis, 64, a documentary filmmaker who moved to Cochise County in 2004, says she has "lived in terror" as illegal immigrants have crossed her acre-plus property in the middle of the night. "It's out of control," she said. "We're vulnerable here." A registered independent, Maharis isn't sure yet which candidate she'll support in November. "I don't believe that any of them has a handle on it," she said regarding the immigration problem. "It seems to be running in extremes. I don't think that extremes are the answer."

Maharis added that she is concerned about Graf's other conservative positions. "I don't think religious issues ought to be part of a campaign," she said. "They should be separate."

Similarly, the Sept. 12 primary left local Republicans divided. The day after the vote, Kolbe released a statement saying he could not support Graf, although he left the door open to an endorsement before Election Day. "There are such profound and fundamental differences between his views and mine on several key issues that I would not be true to my own principles were I to endorse him now for the general election in November," Kolbe said.

Since then, Graf has been attacking Giffords on immigration. "She obviously voted against virtually any measure that the legislature tried working on the last few years to deal with it on a statewide level," Graf claimed. "That is part of what this campaign will be about -- to educate the voters where I stand on the issues and make sure they understand where she has been on this issue."

Graf's allies have also been working to educate the voters, using some hard-hitting tactics. Last week, the Minuteman Political Action Committee -- an offshoot of the Minuteman Civil Defense Corps of which Graf is a member -- began airing a TV ad calling Giffords a "liberal extremist" who supported everything from amnesty to welfare benefits for illegal immigrants.

"They just made up a bunch of false charges and put them on television," said Rodd McLeod, Giffords' campaign manager. But the Giffords campaign likely wasn't surprised. Even before the Minuteman ad aired, Giffords anticipated the need to inoculate herself against charges by Graf that she was soft on border security. While serving in the Arizona state legislature from 2001 to 2005, she generally voted against punitive measures aimed at illegal immigrants. But her first campaign ad after Graf won the GOP primary criticized the Bush administration and the GOP-controlled Congress for failing to secure the border.

She is continuing to play up that message, pointing out that crackdowns on employers of illegal immigrants have decreased in the last few years. "Clearly the priority of this administration and this Congress has not been to go after the demand side of this problem, but to go after the supply side," Giffords told Salon. "We have to approach both sides."

The race between Giffords and Graf in some ways reflects the faultlines in the Republican party on immigration. Her party affiliation notwithstanding, Giffords has essentially aligned herself with moderate Republicans. She says she supports a "bipartisan" solution like the one touted by Republicans such as the outgoing Kolbe, and Arizona Sen. John McCain. She wants to see a guest-worker program as well as an increase in the number of Border Patrol agents. And although she opposes a blanket amnesty for illegal immigrants now in the United States, she favors allowing immigrants who have lived in the United States for several years to have a path to citizenship, as long as they speak English and pay a fine or back taxes.

Graf's position fits that of conservative House Republicans, such as Judiciary Chairman James Sensenbrenner of Wisconsin and Rep. Tom Tancredo of Colorado, who have pushed for an enforcement-only approach that calls for an expensive wall to be built along much of the border, and no guest-worker program.

McLeod says his candidate's more moderate approach -- similar to that of top Republicans and the president -- will resonate with swing voters. "John McCain, Arlen Specter and George Bush are not exactly raging liberals," he said.

Kenski, the long-time GOP pollster, acknowledges that the immigration issue continues to be a powerful motivator in the region, but says Graf needs to broaden his campaign if he hopes to win. "He needs to talk about something other than the border," she said. "You can't run on a single issue and if that's his strategy, he's got a problem."

But the Graf camp remains confident that a hard-line focus on immigration can bring them a shot at victory next month. As Graf campaign manager R.T. Gregg puts it: "The border got us here and the border will take us home."

Jim Nintzel covers politics for the Tucson Weekly and teaches journalism at the University of Arizona.