I'm due in four weeks and if the predictions of my mother friends are accurate, I should feel like a total impostor, a crappy mom, a complete failure. 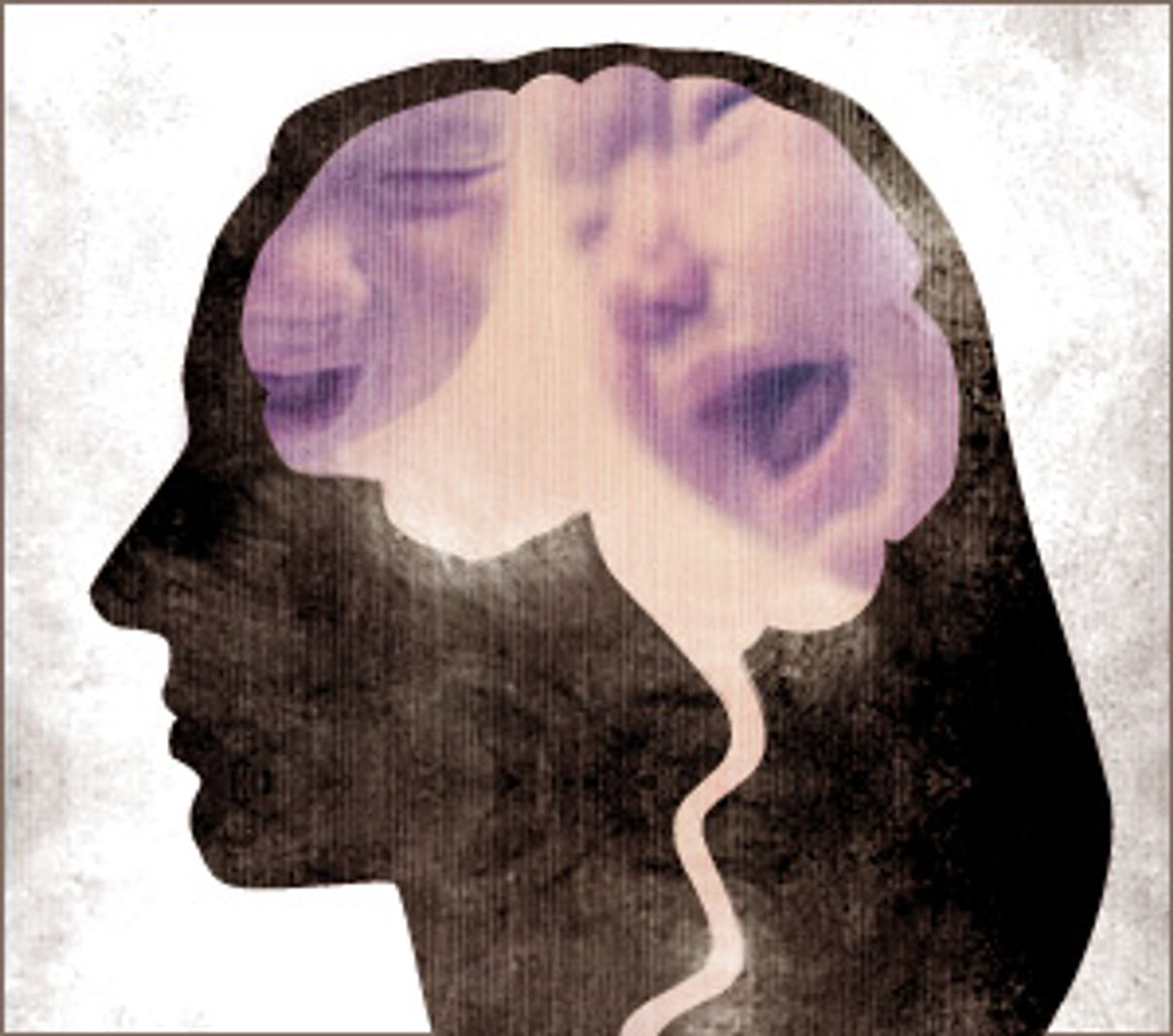 The joys of motherhood await me! In about a month, if all goes well, I'll be the first-time mother of a newborn. According to my friends who are mothers, this means that the healthy glow and abnormally cheerful moods of pregnancy will soon be gone, replaced by a sallow zombie mask. I'll have trouble running a brush through my hair, my stomach will sag like an empty duffel bag, there will be big, dark circles under my eyes, and acquaintances will speculate as to the severity of my postpartum depression -- which will be very, very severe indeed.

Of course I'll try my best to do everything I've been told -- I'll try not to "overthink" breast-feeding but will aim to achieve a "good latch," I'll try to pump early and often, I'll nap when my baby is napping, I'll make my husband change every single diaper and walk the baby in a million little circles, I'll treat motherhood as my brand-new, overtime, around-the-clock job, I won't attempt to vacuum or shower or pay bills, I won't guilt myself into thinking I should be back at work prematurely -- but even so, I'm told that I'll feel angry and sullen and overwhelmed. I'll cry over nothing, or over the fact that there's a lamprey-like beast sucking my will to live straight out of my sore breasts.

Yes, just four weeks from now, if the predictions of my mother friends are accurate, I should feel like a total impostor, a crappy mom, a complete failure at my "new career," but I'll also be so spaced out and slow that I'll wonder if I can ever return to my old career again. I'll have to let my husband wash the lamprey, just in case I turn into Andrea Yates in a weak moment. I'll be just like Brooke Shields was after her first baby was born, except that I'll look like shit and I won't have the energy to write a book about it -- and even if I do, no one will buy it.

Occasionally, I'll make desperate, weepy calls to friends, barely able to string enough words together to describe the feeling of walking around underwater, spaced out, stuck in some hazy existential crisis. My closest friends, who are childless, will sigh sympathetically, then hurry off the phone, depressed by the prospect of procreating. My friends who are moms will chuckle sympathetically, then hurry off the phone to prevent their toddler from sticking a fork into the nearest electrical outlet.

Now and then, I'll go out for a walk, lamprey in tow, just like I'm supposed to do. My lamprey will whine and then explode into tears, but I'll sally forth, determined to make it to the local coffee joint, even though I can't actually drink any coffee, since I'm breast-feeding and the caffeine is sure to give my lamprey ADHD or autism or asthma. I'll stumble over to the "child play area," which always seemed to be full of moms trading epidural stories when I worked there on my laptop -- you know, back when I was a successful writer with a flourishing career and a life of endless promise stretching out before me. There'll be one mom there with a toddler and a camera-ready model baby, sleeping in its expensive stroller. She'll point out that I have my Baby Bjorn strapped on incorrectly, in a way that's known to increase the risk of suffocation. While she readjusts my Bjorn, she'll ask me polite questions about the lamprey sucking the life blood out of me, as if it's not strange at all, as if I'm not clearly starring in some sci-fi horror flick that ends badly.

Then she'll launch into her enthusiastic views of attachment parenting and other all-consuming child-rearing techniques that I know nothing about, other than the fact that they demand that mothers annihilate their egos and bend the laws of space and time in order to accommodate their children. While she talks, she'll begin unpacking a seemingly endless array of tiny Tupperware containers from her leather diaper bag, each housing a different organic, wheat-free, lactose-free snack, and she'll pull out several scent-free sanitary wipes and a sippy cup full of juice and a very expensive breast pump, and she'll (very discreetly) feed her very attractive baby with one breast while (efficiently and effectively) pumping the other breast, and she'll hand out small, tasty chunks of food to her toddler, all of them rich in Omega-3 and iron and vitamin C. Watching her will suddenly make me feel very faint, and my lamprey and I will hit the floor with a sickening thud that causes everyone in the entire coffee joint to turn their heads and gasp and vow never, ever to forsake their very promising and brilliant writing careers in order to procreate.

But things will get better for me a few months later, don't you worry! The lamprey will start sleeping for two-hour stretches at a time (What a luxury!), enough time for me to actually call my few remaining friends and tell them I can't make it to whatever fun-sounding event they're planning. I'll blame it all on the lamprey, of course, and I'll describe, in excruciating detail, how cute the lamprey's expressions are these days, especially when it has gas. I'll even check my e-mail, just like I did in the old days! Of course, once I get tired of reading old messages, I'll just delete them all and send out a group e-mail announcing that I can no longer be expected to return calls or e-mails in a timely fashion and I can't drive for more than three minutes without the lamprey crying (unless I sing "Farmer in the Dell" in a very happy, high voice, but that only buys me another two minutes), so anyone who wants to talk to me or see me will have to come to my house, where I'll be distracted constantly and will have one or the other of my bloated, pale, blue-vein-covered boobs out at all times.

In my e-mail, I'll explain that, yes, I recognize that some women in Africa only pause for half a second to give birth, and then they return to toil in the fields while their baby is raised by their 3-year-old or their grandmother or their dog, but that's only because those women have very mellow babies, not colicky, fussy little creatures like my lamprey, and besides, studies have shown that babies in Africa often develop emotional insecurity from being raised by their 3-year-old siblings, who also don't tend to notice when they're getting loose stools or eczema or painful rashes from their non-hypoallergenic burlap bedding. I will remind my friends that American children have the distinct advantage of being the center of their parents' universes, and without overzealous, overbearing helpings of attention and care, they'll never grow up to be neurotic, overachieving, ulcerous mutants that fit neatly into our society's soulless, workaholic culture.

It will feel good to reconnect with my dear friends through the convenience of a mass e-mail! But best of all, every week or so, I'll venture out of the house without the lamprey! I'll get to take luxurious half-hour strolls down to the pharmacy for more diaper rash cream. It will feel so nice to get away from home, every corner of which is now filled with brightly colored plastic devices and discarded butt wipes and little radios that play happy baby songs that make you want to beat someone's head in with a tire iron.

Sure, I'll sometimes wonder if the lamprey is still breathing without me there, watching it closely, monitoring its every breath. I'll picture my husband, dropping the lamprey on the floor and then tripping over it. I'll picture the dogs, fighting over the lamprey like a chew toy. And then, while I'm in line for the cashier, I'll catch a glimpse of that Vanity Fair cover with Katie Holmes and Tom Cruise and that creepy, overstyled, wise little elf Suri tucked between them, the whole family looking painfully smug and rich and scary, and I'll break down sobbing and I won't be able to stop. I'll rush back home to the lamprey and I'll feel relieved that it's still alive, but I'll notice that it's got spit-up on its onesie and its diaper hasn't been changed, and I'll fly into a rage and accuse my husband of being a shitty father.

But things will get better after that, don't you worry! Eventually, I'll get divorced, and the lamprey will start to talk, babbling on about Teletubbies and Pokemon and other really tedious stuff, and then the lamprey will become a sullen big kid who proclaims that it's "bored" all the time, so I'll rush around to keep it busy and happy, and sooner than you know it, the lamprey will be an angry, temperamental teenager with a seriously overblown sense of its own importance. Finally, one day in the not-so-distant future, maybe after it has a particularly helpful therapy session, the lamprey will call me to tell me that, as part of its "healing process" it needs for me to understand that I was a crappy mother. On top of being seriously stupid and uncool, I was incredibly injurious to its sense of self, and I would've been a way better parent if I hadn't worried about it so much or driven it to piano lessons (which it fucking hated), because all of my energy and focus on it were just a total nightmare and that's why it was driven to drink and drive and shoot drugs and shoplift and catch venereal diseases from scary losers with gun collections and bad hair and corn-chip breath. When I start to get defensive, saying that maybe I made some mistakes, but really, all I wanted was to do my best and love my kid with all of my heart, the lamprey will scream that I don't understand anything -- I never understood anything! -- and then it'll hang up on me.

Several birthdays and holidays and Mother's Days will go by, unmarked, as I hobble around my cluttered, dusty, cat-filled house, but don't worry! Things will get better when I go to live in a nursing home, and my lamprey comes by one afternoon to introduce me to its lampreys (all grown up now), who seem to hate its guts almost as much as it hates my guts. And when the little (full-grown) lampreys cringe as they watch me unwrap and eat my apple sauce out of its plastic cup without the aid of my dentures, which are disinfecting in a glass by my adjustable bed, my lamprey will shoot me a sympathetic look. No, my darling lamprey won't say, "I'm sorry" or "I love you, Mom" or anything like that, but that look it gives me will more than make up for all of the pain and sacrifices I went through as a mother! I'll get a warm glow deep down inside, and I won't even feel bad later, when I discover that my antique gold watch and the roll of $20 bills I save for Bingo are both missing from my sock drawer.

To think, in just one month, the joys of motherhood begin at last! How blessed I feel, to be poised on the precipice of this wonderful new adventure!