In his best book in years, Bob Woodward has White House insiders confirming what we've known all along: Bush hid the truth about Iraq. 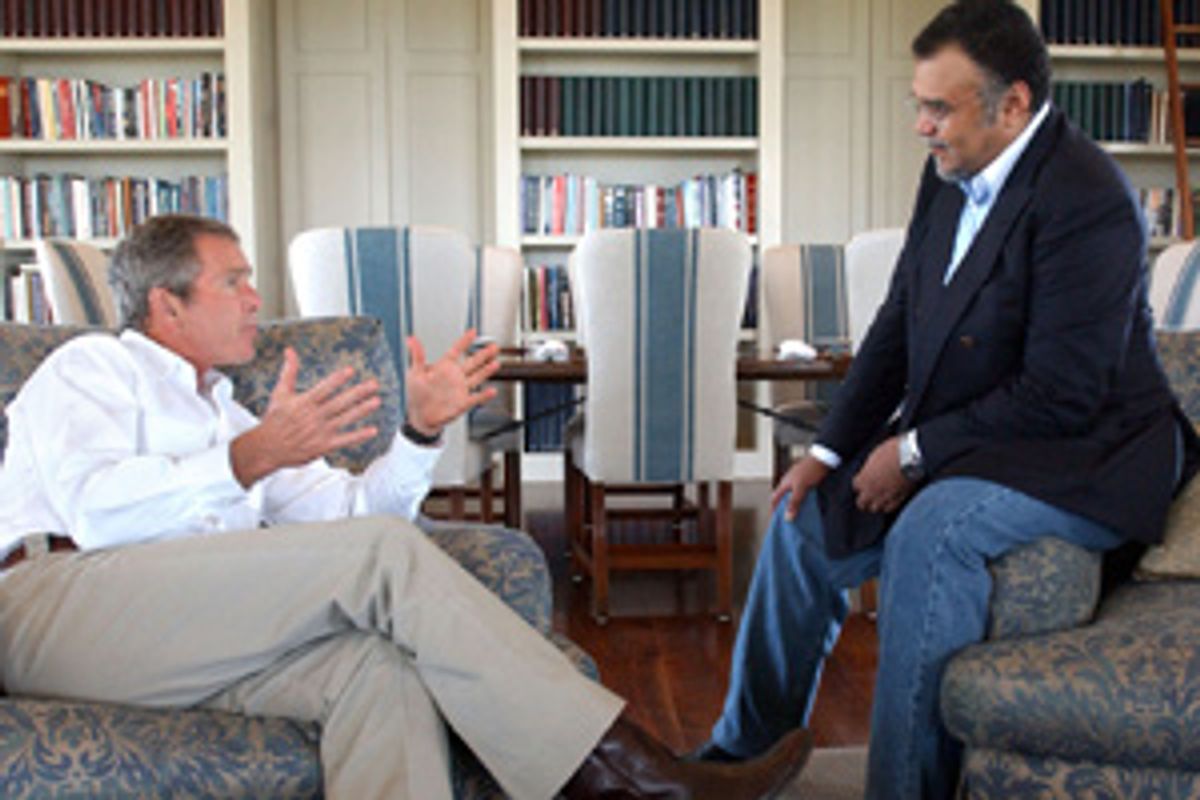 Bob Woodward's new book, "State of Denial," is the third in his George W. Bush trilogy, a saga that should carry the collective title, "All the President's Wars."

The book went on sale Saturday morning, 48 hours early because of -- sweet irony -- press leaks. By now, many Americans have already seen the front-page headlines, scanned the articles, skimmed the excerpts (in the Washington Post and Newsweek), watched the TV interviews (Woodward is on every network save perhaps Lifetime), heard the Democrats' gleeful talking points and the Bush administration's implausible denials. Caught up in the breathless Woodward buzz-fest, a literary hype machine unmatched since Gutenberg held his first book party, concerned citizens might yield to a patriotic obligation to buy the book, but then feel no compulsion to read all 491 pages.

That would be a mistake, since "State of Denial" is Woodward's best book in more than a decade. This verdict is not solely premised on the author's belated disillusionment with the commander in chief: "With all Bush's upbeat talk and optimism," Woodward writes in his final sentence, "he had not told the American public the truth about what Iraq had become."

What makes the book so compelling is the accretion of detail proving that Woodward can successfully operate as a nuanced critic of the administration as well as its quasi-official court biographer. "State of Denial" challenges some glib assumptions about the causes of Bush's tragic global follies while offering new reasons to be fearful about presidential decision making. While Woodward's old-style Joe Friday ("Just the facts, ma'am") style of narration can be frustrating for those who long for why-am-I-reading-this guidance, the never-before reported nuggets in every chapter provide more than enough compensation.

True, "State of Denial," like all Woodward books, should have this warning slapped on its cover: "Readers must pan their own gold." The difference this time, with many more internal Bush critics willing to confide in Woodward, is that the news stream is the journalistic version of Sutter's Creek.

As Woodward tells it, Nebraska GOP Sen. Chuck Hagel, a Vietnam veteran turned war critic, cautioned Bush after a rare invitation to a presidential luncheon in June 2005, "I believe that you are getting really bubbled in here in the White House on Iraq. Do you ever reach outside your inner circle of people, outside your National Security Council?" Surprisingly, Bush responded, arranging for Hagel to make his pitch to NSC staffers about the need to face up to the mess in Iraq. But this brief window on reality was quickly slammed shut after Hagel was branded as disloyal for repeating his critique in an on-the-record interview with U.S. News & World Report. Hagel's original warning to Bush that he was being "bubbled" (a wonderful verb) on Iraq fits with the familiar portrait of a dangerously out-of-touch president.

But, elsewhere in his narrative, Woodward provides compelling evidence that the real problem may be worse -- the rogue's gallery of outside advisors who do have regular unmediated access to the president. It is not accidental that "State of Denial" begins with a reprise of the Bush family's intimate relationship with a former Saudi ambassador to Washington, Prince Bandar. At the instruction of his father (Bush 41), Bush (soon to be 43) met with Bandar in 1997 and confided, "I'm thinking of running for president ... And I don't have the foggiest idea about what I think about international foreign policy." You do not have to be a Michael Moore-style conspiracy theorist to find it worrisome that a Saudi prince is put in charge of giving a future president his worldview.

Bandar, who may now be much more willing to go public with Woodward since he has returned home to Saudi Arabia, keeps popping up in the narrative in chilling ways. The administration's infamous rendition policy -- under which terrorist suspects are farmed out to foreign governments with a belief in the truth-telling virtues of torture -- may have begun shortly after 9/11 when Bush told Bandar, "If we get somebody and we can't get them to cooperate, we'll hand them over to you."

The book also describes Bandar's Oval Office meeting in early 2004 with Bush, Condi Rice (then the national security advisor) and White House chief of staff Andrew Card (another source, since he has now left the administration). Bush, Woodward writes, "thanked Bandar for what the Saudis were doing on oil -- essentially flooding the market and trying to keep the price as low as possible. [Bush] expressed appreciation for the policy and the impact it could have during the election year."

"State of Denial" underscores how difficult it is to discuss Iraq without seeing eerie parallels with Vietnam. To his credit, Woodward gets Peter Pace, the current chairman of the Joint Chiefs of Staff, to acknowledge in an on-the-record interview that Bush periodically requests "body counts" -- the estimates of enemy casualties that so misled Robert McNamara, LBJ's secretary of defense. Pace, who remembers the lessons of Vietnam, has tried to resist, telling Woodward, "I am satisfied that the president knows exactly where I am on body counts."

But the most alarming Vietnam specter is not body counts, but another two-word noun: Henry Kissinger. As Vice President Dick Cheney told Woodward in a 2005 interview, "Of the outside people that I talk to in this job, I probably talk to Henry Kissinger more than I talk to anyone else." Bush too fell under the sway of that Nixonian relic who did more than anyone else living to add names to the Vietnam Memorial through his stubborn refusal to admit that the war was a lost cause.

As Woodward writes, citing Card as his source, "Kissinger was one of the few nonfamily outsiders with a standing invitation to call whenever he was coming to Washington to see if the president was available."

Aside from passing references to Kissinger distributing copies of his 1969 "salted peanuts" memo (likening Vietnam troop withdrawals to an addictive snack), these anecdotes have not received much attention in the roll-out of "State of Denial." Instead the media blitz has centered on secret Pentagon and State Department reports that described the Iraqi civil war in candid terms at the same time when Bush and Company were indulging in Panglossian fantasies. (If anyone was shocked by these revelations, it is safe to assume that he or she is on the White House payroll.)

The other major motif of the news stories and TV interviews is the portrayal of Defense Secretary Donald Rumsfeld as the pivot of the axis of evil in the second-term Bush administration. As Woodward writes, early in the book, foreshadowing his theme: "It is an irony that Rumsfeld had set up a system that did not ensure that he receive warnings from the uniformed military about rosy scenarios like those that had been promised from Vietnam to Kosovo. Strong, forceful military advice was bleached out of the system."

The two engrossing extended narratives in "State of Denial" revolve around Rumsfeld's maladroit personnel decisions, which Woodward implies might have made the fatal difference in Iraq. This interpretation betrays the author's establishmentarian bias by suggesting that if competent officials had been given real power, Bush's Mesopotamian adventure would have gone just splendidly.

Most intriguing is the little-known story of how Adm. Vern Clark, the independent and outspoken chief of naval operations, almost became Bush's first chairman of the Joint Chiefs of Staff in 2001. As Woodward put it, "Clark was the one officer who might survive Rumsfeld and preserve some sense of dignity and independence for the uniformed military." Even though Clark bonded with Bush by stressing his deep-seated religious beliefs, the nomination was cleverly scuttled by Rumsfeld, who did not want a Joint Chiefs chairman offering independent advice to the president. Instead of Clark, Bush appointed make-no-waves Air Force Gen. Richard Myers, who proved predictably compliant during the planning for the invasion of Iraq.

Woodward also displays an obvious affection for retired Gen. Jay Garner, the first American proconsul in postwar Iraq. Quoting with approval longtime James Baker aide Margaret Tutweiler, who had been sent to Iraq to devise a communications strategy, Woodward writes, "Tutweiler liked Garner. He was a genuine patriot, she thought, without a personal agenda. But he was no Jim Baker. Garner did not know how to line up all the players in the Washington game." Back at the Pentagon, Rumsfeld, the master of backroom backstabbing, orchestrated Garner's being quickly replaced by Paul Bremer, the visionary who triggered the explosion of insurgency by disbanding the Iraqi Army and purging the civil service.

Just by statistical chance, not all of the Pentagon czar's decisions proved disastrous. Shortly after U.S. troops took Baghdad, Rumsfeld saw a draft of Bush's planned victory address from the flight deck of the aircraft carrier Abraham Lincoln. "I took 'Mission Accomplished' out," Rumsfeld told Woodward. "I was in Baghdad and I was given a draft of the thing and I just died. And I said, it's too inclusive. And I fixed it and sent it back. They fixed the speech but not the sign." As Woodward points out -- with none of the equivocation that marred his earlier Bush books -- Rumsfeld's story proves that White House spokesmen were lying when they claimed that the "Mission Accomplished" banner had been devised by the sailors on the Lincoln.

"State of Denial" is far from perfect, suffering from the problems that naturally flow from trying to write a historical narrative on the fly based on fly-on-the-wall reporting. Once- dominant figures in Woodward's earlier books virtually disappear with only a few words of explanation: "It was an uneasy time for Vice President Cheney ... The center of gravity on Iraq had shifted out of the White House." Big mysteries like the president's private rationale for invading Iraq and whether he and Cheney actually believed their own hyperbolic claims about weapons of mass destruction remain unanswered, despite additional reporting by Woodward.

But the book works within its self-imposed limitations -- and it offers the most revealing in-the-room glimpse of the Bush administration that we have so far. While "Mission Accomplished" is now a dangerous claim in all contexts, it is fair to say that "State of Denial" fulfills the expectations that invariably surround a new volume by Bob Woodward.