A lifesaving good deed by a meek crime novelist sets off a series of unpredictable events in Kate Atkinson's shrewd and witty new novel. 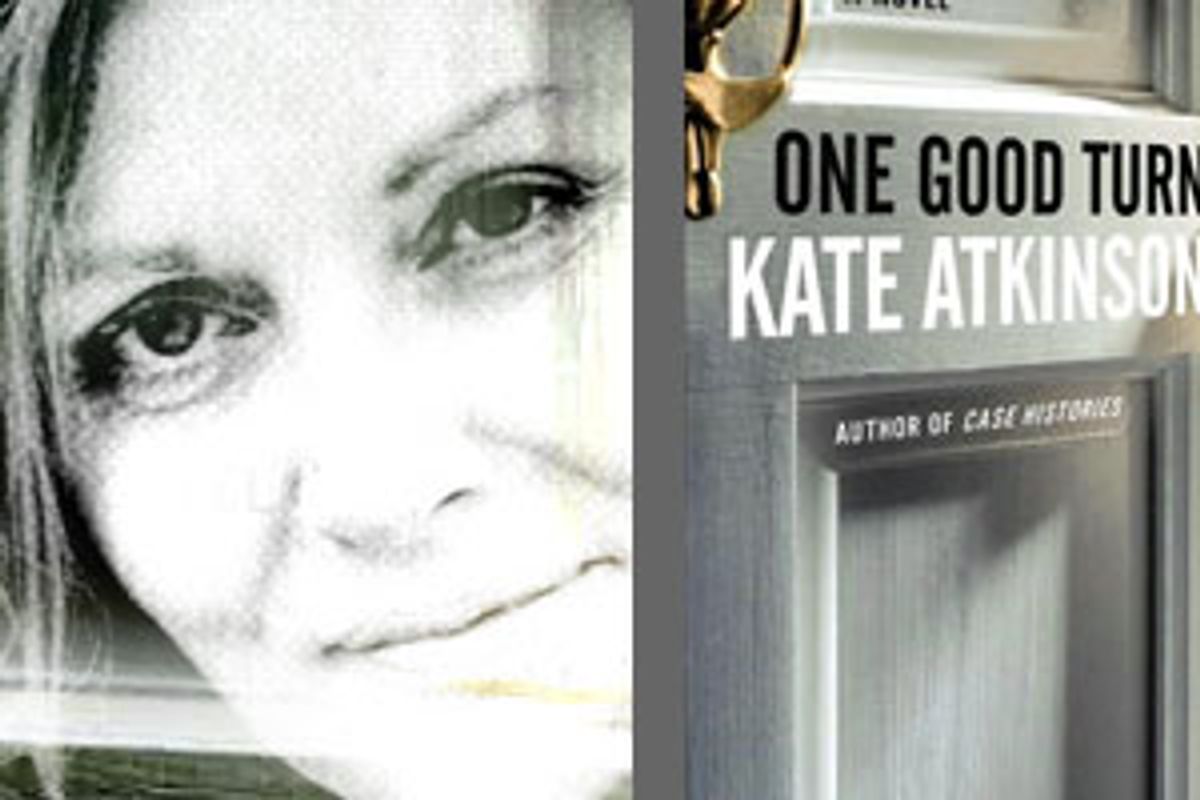 All but one of the principal characters in Kate Atkinson's new novel, "One Good Turn," witness the same disturbing incident. After a fender bender on an Edinburgh, Scotland, street, a driver gets out of his car and savagely attacks another man with a baseball bat. The assailant is about to finish the victim off with a blow to the head when someone in the crowd of bystanders flings a laptop case at him, clipping his shoulder and thereby chasing him off. The laptop-case flinger is Martin Canning, a meek crime novelist who's produced a successful series of nostalgic mysteries under a pseudonym. Tossing that case is the bravest thing he's ever done.

Martin's intervention is the "good turn" of the book's title, but does it lead, as the proverb would have it, to another? Not exactly. In Atkinson's universe, a good turn is more likely to set off a chain of unpredictable events, whose connections will only become apparent when the dust clears at the very end.

One of the witnesses to the assault is Jackson Brodie, a policeman turned private eye turned man of leisure, familiar to admirers of Atkinson's delightful 2004 novel, "Case Histories." That book came as a revelation to many readers. It was undoubtedly literary -- the characters were three-dimensional and idiosyncratic, the writing artful, the emotional nuances in the scenes never sacrificed to the exigencies of plot -- but it was also outrageously entertaining. Despite Jackson's profession, "Case Histories" isn't quite a mystery novel, and there's something impish about Atkinson writing another book with Jackson in it, as if she's playing at writing a genre series.

"One Good Turn" also isn't quite a mystery, despite the crimes and conspiracies that keep the plot humming along like an unstoppable little two-stroke engine. There are few clues to decipher, and you can probably make a pretty solid guess about who's behind the novel's skulduggery if you choose to try (though there is a final surprise). Atkinson has certainly borrowed some techniques from Olympian crime novelists like Ruth Rendell; she moves her authorial eye from one character to another, allowing each one to know a small piece of an overall pattern that only the reader and author can grasp in toto.

This is the opposite of the classic clever detective yarn, with its unflappable confidence in the preternatural deductive powers of the sleuth hero. Like Rendell, Atkinson has little faith in heroes, or in anyone's ability to figure out what's really going on in life, let alone control it. The pleasure here lies in watching the intricate branches of Atkinson's plot unfurl, and in savoring the tart, quirky character portraits that hang from them.

In addition to Jackson and the long-suffering Martin, those characters include Gloria Hatter, the 59-year-old wife of a shady real estate developer, who contemplates a potential new lease on life when her husband has a heart attack in a hotel room during a session with a Russian dominatrix. Gloria holds firm, mordant opinions about nearly everything, from her cohort, Pam (not "what Gloria would have called a friend, just someone she had known for so long she had given up trying to get rid of her"), to her suspicions about people "who had no time for sugar, it was a personality flaw," to her enthusiasm for the notion of "cameras watching everyone everywhere." Gloria is bullish on accountability, and she'd like the payback to start with her unconscious, hospitalized husband, Graham.

As for Jackson, having inherited 2 million pounds from a former client and fulfilled his lifelong dream of buying a farmhouse in southern France, he's dismayed to find himself feeling "unmanned." "Real men," he suspects, "didn't spend their days filling up their iPods with sad country songs and feeding apples to French donkeys." He's been dragged to Edinburg for the annual theater festival, where his girlfriend, Julia (another character from "Case Histories"), is performing in a ghastly, pretentious play. Like a real mystery series sleuth (say, Nina Riley, the Nancy Drew-style detective in Martin's books) he has a slightly absurd tendency to stumble onto crime scenes, but unlike the intrepid Nina, he's merely adequate at nailing the culprits.

Then there's poor Martin: His good Samaritan impulses manage both to endanger and to save his life. There are a couple of murders in "One Good Turn," but they aren't really much more gruesome than the killings in Martin's Nina Riley novels. Instead, it's the everyday slaps and pinches that Atkinson depicts with an excruciating -- and very British -- eye for life's routine humiliations. A BBC producer who's bought the rights to Martin's books announces that reading them is "'Like getting into a warm bath. Perfect fodder for the Sunday evening slot'... making it sound like an insult, which of course it was."

In truth, there's far less Agatha Christie in "One Good Turn" than there is Barbara Pym, the late great comic novelist who specialized in improbably funny stories about vicars' wives and village "jumble" (rummage) sales. Atkinson has updated the settings and injected some ambition into the mix, but she has the same shrewd, observant wit and surreptitious fondness for humble, put-upon people who try to behave decently in a cutthroat world. There may not be a great detective in "One Good Turn," but there are a few of these menschen, and they make much better company.