Back-to-school day came again, and with it an urgent question: Why does it take the memory of a Hello Kitty lunchbox to make you realize that life is not a drill? 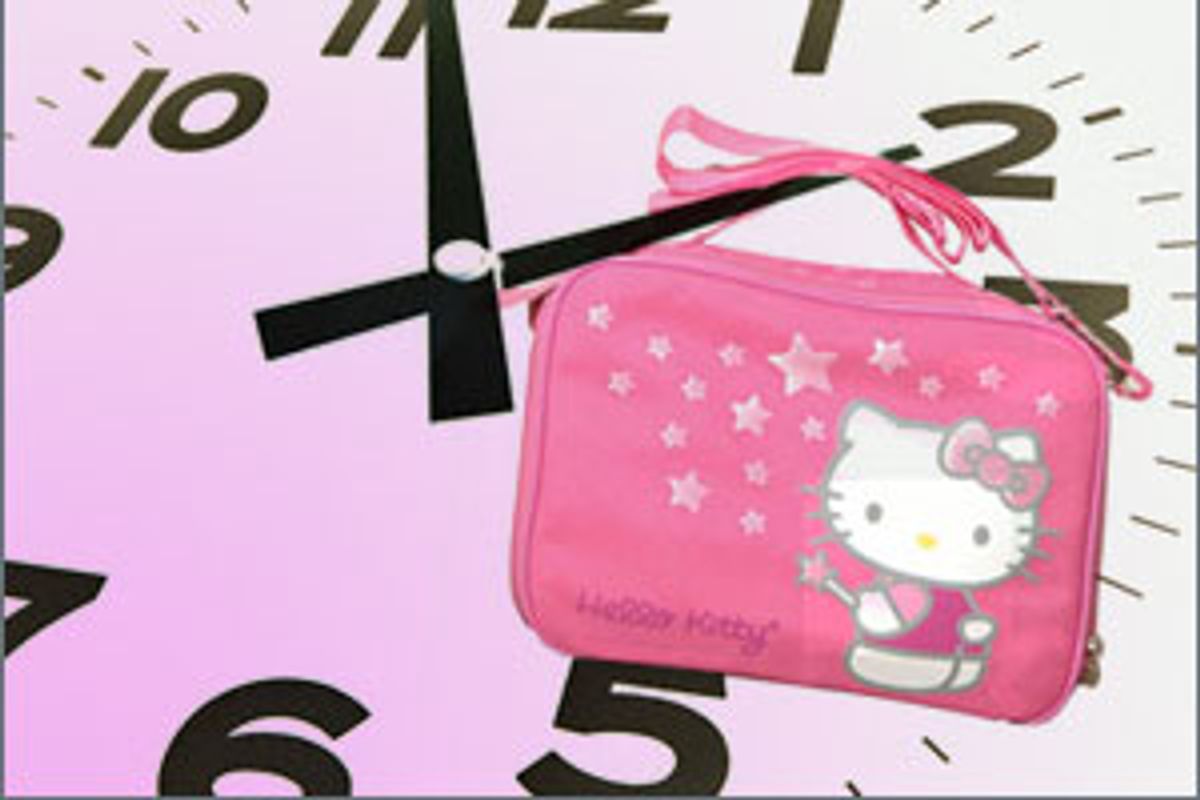 My daughter, Celeste, started fifth grade a month ago, and my stepson, Zachary, started his senior year of high school. For me, these annual back-to-school days are a more pointed reminder of the passage of time than birthdays, New Year's Eve or any of our society's other rituals of commemoration. I don't really feel the changes in my own life from birthday to birthday, and the change of the calendar year rarely inspires much reflection. But fourth to fifth grade? That's going from the Permian to the Triassic. You go to bed and your kids are fungal life forms; you wake up and they're reading Faulkner.

As a parent, you have a ringside seat to watch these transformations. That isn't true with your own life. As a grown-up, filing experiences away before you even have them, very little feels new anymore, and the hands of the clock spin around faster and faster. Your life slips away, with no promontories from which to observe it. Time fades you, washes out your colors, and maybe the fading itself, like the anesthetizing bite of a vampire bat, prevents you from noticing it.

But you do notice your children. They change so fast that even your tired old eyes can't miss it. And on these ceremonial occasions, like back-to-school day, images of all the other back-to-school days before them flash before your eyes. Your children get smaller and less argumentative with each one, their lunch bags get gaudier and gaudier. And remembering, you feel the finality of time. You realize that their old selves are gone and won't come back. And that you'd better enjoy the ride because it's a one-way line.

I recently witnessed a time-lapse version of this in my backyard, after we adopted two hatchling ducks from a county fair. Their growth was a science fiction-esque, almost frightening process: They went from balls of fluff that could fit in your hand to full-grown birds in a little over a month. If you blinked, you missed their entire development. Very strange.

And even stranger is that it takes the memory of a Hello Kitty lunchbox to make you realize that life is not a drill.

In his famous essay "The Sense of an Ending," the British literary critic Frank Kermode drew a distinction between the two Greek words for time: "kronos," which is the mere tick-tock of ordinary life, clock time, just "one damn thing after another," and "kairos," which is special or crisis time, transfigured time, time with the tragic dimension restored. He argues that Christianity, the central Western myth about time, instills that dimension; so does great literature.

So, in their own way, do children. They uncannily double your experiences, like an overtone or an octave note. You see yourself in your kids, but in a very strange way. Watching your children is like watching yourself through a window. You simultaneously live your life and observe it. This leads to a peculiar phenomenon: You frequently remember the experiences you have with your kids at the same time you're having them.

Why spend money on cumbersome volumes of Proust when you've got bundles of lost time conveniently located right in your own home?

A random example. I was walking back along the Embarcadero, the promenade along San Francisco's waterfront, from a Giants game with Zachary a few years ago. He was probably 11 or 12. He took my hand as we crossed the street, as he always did, and we kept holding hands after we crossed, when it suddenly entered my mind that this might be the last time we would ever do this.

Which, basically, it was.

So I enjoyed the moment, and at some point he let go of my hand. And I let go of the thought, which fluttered off like a butterfly and disappeared, and we walked up Jackson Street to our house.

The poignancy tap with kids is always open; you could drown in it. Luckily, unless you're a really melancholy or self-involved person, you don't. Because if you look at change and see only loss, you've taken yourself out of the game. The beyond-life perspective may create a tragic sense of time, but the tragic sense of time doesn't get the kids to school in the morning. For that, you need an alarm clock. Proust would probably have been a really bad parent.

Kids are an extremely irritating miracle. So parents are constantly tacking back and forth between the far shore, a place of sublime light and Turneresque shadow, and the near, a plastic wasteland adorned with broken Happy Meal toys. Hence the peculiar expression, simultaneously blissed out and pissed off, to be observed on the faces of so many parents.

Actually, if the unpleasant truth be known, we spend a lot more time on the near shore. Parenting isn't about compromise or negotiation. It's about complete and total collapse, cutting and running, the craven abandonment of all ideals and all pride. We're talking about letting the terrorists win, going home and having a drink.

It's hard to believe that George W. Bush was ever a parent. You want to transform the Middle East? Would you settle for a shwarma that's not too covered with flies? Of course, God speaks to Bush, so he has an advantage as an authority figure. I stopped believing in the voice of God when Celeste discovered the Disney Channel.

But chances are her demonic pact to worship Allie and AJ will eventually transmogrify into a love for Sarah Vaughan or Jimi Hendrix, like her older brother's. The far shore isn't -- and shouldn't be -- always in sight, but you see it often enough to steer by it.

So I watch them getting ready for their first morning of school. Celeste in her nice new skirt and top from Target, a little nervous but trying to be brave. Zachary a veteran, his painful freshman and sophomore years long behind him, already deeply immersed in subjects I didn't study until I was long out of college.

Is this the little 4-year-old who seized my leg and wouldn't let go, that moment in the kitchen so many years ago when I realized he had come to trust this strange man who had come into his life? Is this the little girl I carried in my arms for so long?

The river flows on, the same and not the same.

I take the keys and open the door. We don't want to be late on the first day of school, or of the rest of our lives.