Rep. Tom Reynolds is running scared, as the Capitol Hill sex scandal threatens to topple the four-term incumbent -- and his plans to keep a GOP grip on the House. 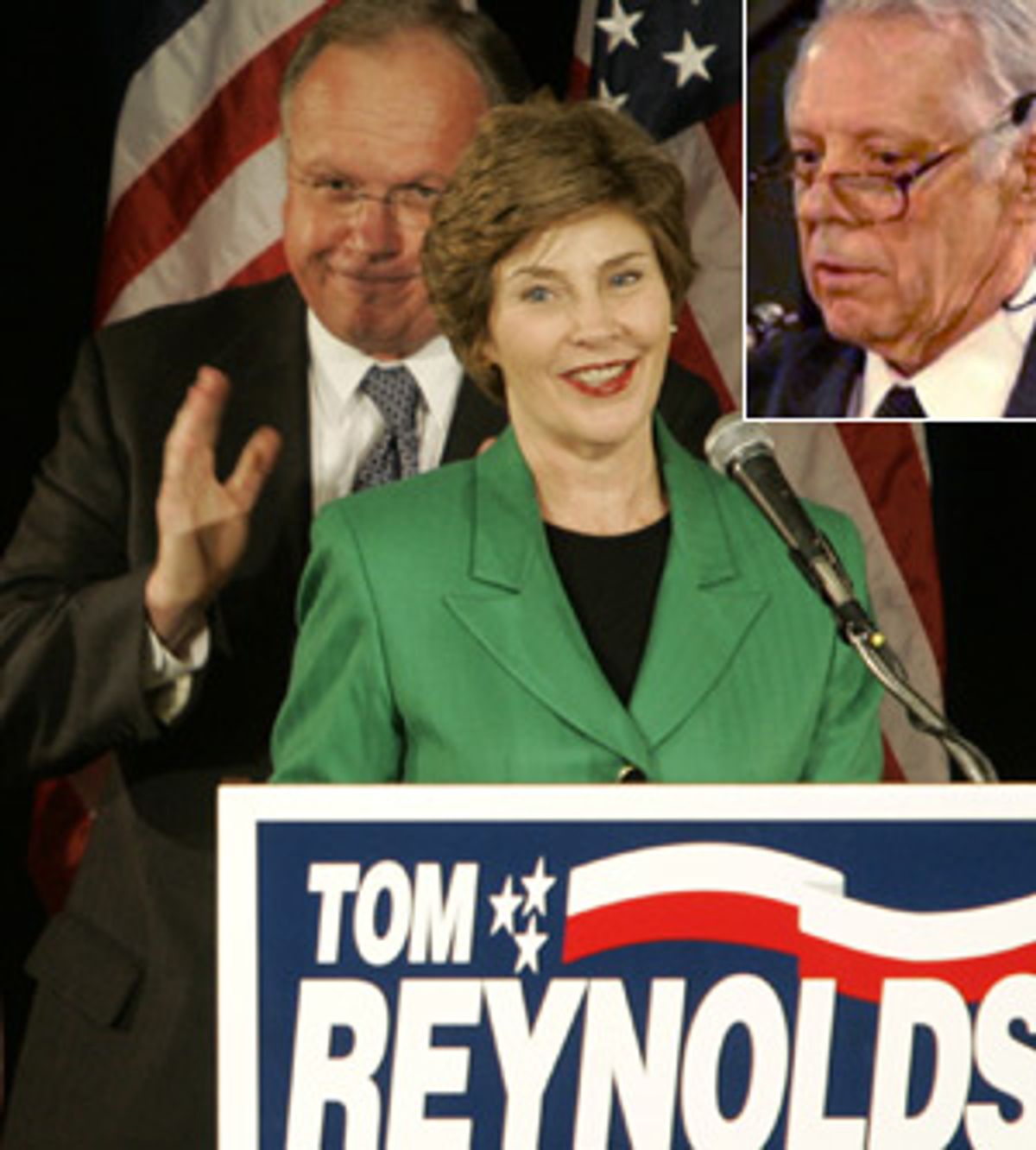 Entangled in the Mark Foley scandal four weeks before the election, Tom Reynolds invites comparisons to silent-movie comedian Harold Lloyd desperately clinging to the hands of a moving clock.

A four-term incumbent, Reynolds was so confident of reelection in this normally safe Republican upstate district that he signed on to head the national House GOP campaign committee, as he had in 2004. But Reynolds -- who had been warned months ago of Foley's improper e-mails to House pages -- is reeling from a new poll in the Buffalo News that shows him trailing his odd-duck Democratic challenger, Jack Davis, by a stunning 48 percent to 33 percent (with a 5 percent margin of error). Apparently that deficit isn't just due to the Foley problem; as the News commented, "Widespread opposition to [George W.] Bush and the war ... suggests Reynolds' re-election was in trouble before the congressional page scandal."

In this partly rural district dotted with pumpkin patches, a canvass of the Tuesday breakfast crowd at Settler's family restaurant further explained why Reynolds has the pre-Halloween jitters. "I'm a registered Republican, but I wouldn't vote for Mr. Reynolds if he were running for dogcatcher," said 72-year-old retired school administrator Russ Glowacki, who voted for Bush and "probably" Reynolds in 2004. In truth, Glowacki will not be voting in local dogcatcher elections in 2006 since he changed his residency to Florida to escape New York taxes. But Glowacki said that his wife, who is still registered in Batavia, will be voting against Reynolds for both of them.

At another table, four middle-aged men who work for a construction firm were carbo loading with $2.95 pancake specials and bacon-and-egg breakfasts. A mention of Reynolds by this reporter prompted hoots of derision. All four men, who did not want to be identified by name, had seen Reynolds' apologetic TV ad, which ends with the embattled congressman saying to the camera, "Nobody's angrier and more disappointed than me that I didn't catch [Foley's] lies. I trusted that others had investigated. Looking back, more should have been done and for that I am sorry."

That 60-second spot, double the length of a typical political commercial, has been blanketing the Buffalo and Rochester media markets since Friday.

"Reynolds is spending a lot on commercials," said one of the construction workers, who added he was normally an unshakable Republican. "That makes me think that he's a lot guilty." One of his breakfast companions added, "I think Reynolds is going to lose. If I were a betting man I'd say he's in trouble."

Reynolds might indeed be updating his résumé and preparing to join the ranks of defeated congressmen turned lobbyists if he were facing a conventional, work-the-district Democratic opponent. But none of the dozen or so voters interviewed at Settler's had any impression whatsoever of Davis, a 73-year-old militantly anti-free-trade businessman and former conservative Republican. Davis, who won a surprising 44 percent of the vote in 2004 against Reynolds, is putting more than $2 million of his own money into this year's rematch. As a retired hairdresser, a woman who is cynical about politics, said about Davis, "I don't know anything about him -- so far he's clean."

Much of this invisibility is the direct result of Davis' stubborn refusal to give up his day job, running his company in nearby Akron that manufacturers heating elements for industrial furnaces. A promised interview with Davis vanished Monday when, as the candidate's press secretary Curtis Ellis explained to me, the Democratic challenger was preoccupied with a crisis at the plant. Tuesday, according to Ellis, Davis spent most of the day meeting with a potential client. The septuagenarian Democrat was slated to emerge from his workaholic cocoon to make his first public appearance of the week: a long-planned speech to that pivotal up-for-grabs voting bloc -- the North American Die Casters Association.

Ray Yacuzzo, the Genesee County Democratic chairman, said diplomatically, "Jack doesn't have what I would call good campaign sense. He needs to be out at public events nonstop from here until the election." Even John Gerkin, a young lawyer who is Davis' second campaign manager of the year, conceded, "His style is definitely unique. But I certainly respect it."

Monday night at Davis headquarters (which is located on the second floor of the candidate's plant), eight volunteers -- mostly union members and elderly activists -- made calls from a prepared script to Democrats and independents in Amherst, a large Buffalo suburb on the western edge of the district. Listening to the telephonic chorus, a visitor could pick out the familiar phrases of old-style political canvassing in action: "Hi, my name is Kathy and I'm taking a political survey ... Which of these issues is most important to you? ... If the election were held today, would you vote for Jack Davis or Tom Reynolds?"

The phone-bank scripts did not include any mention of the Foley scandal -- and, according to the canvassers, only a handful of voters volunteered comments about Reynolds' involvement. What was dispiriting for the Davis volunteers was the cipher-like image of their candidate. "The sad part is that people are so confused," said Pat LaVell, a phone canvasser from Amherst. "They don't know who Jack Davis is and what he stands for. That's their biggest problem. So they're undecided."

Davis, whose "Save American Jobs" mantra invites comparisons to Ross Perot, had always wanted to turn the campaign into a referendum on trade with China and Reynolds' support for the Central American Free Trade Agreement. "Jack had a definite idea how he wanted this race run -- on populist economic themes and jobs," said Hank Sheinkopf, Davis' New York City-based media consultant. "And he's willing to put his own money where his mouth is."

But sensing opportunity, Davis and Sheinkopf shifted messages on Tuesday and began airing perhaps the most blistering political ad inspired by the Foley scandal. Accompanied by the usual arsenal of grainy images and ripped newspaper clips, the woman narrating the 30-second commercial declares, "Tom Reynolds knew the truth for months ... What did he do? He urged Foley to seek reelection ... Reynolds says he did nothing wrong. But when it comes to protecting kids, isn't it wrong to do nothing?"

Reynolds, who brought in Laura Bush last week for a fundraiser, is normally an eager glad-hander. But for tactical reasons the embattled incumbent has gone underground since Saturday, canceling a Sunday appearance on ABC News because of what his press secretary, L.D. Platt, described as "flu-like symptoms," and refusing to be interviewed for this article. Reynolds' strategy has been to not say anything about Foley that would get in the way of his 60-second defense for the scandal, currently airing on television. As Platt told me, "The reason we did this ad is to cut through the filter of the media. Reynolds did three press conferences -- and the media wanted more. This is our opportunity to talk directly with the voters."

Now Davis has answered back with an ad that suggests that this is about to become a race that is all Foley, all the time. Reynolds in Washington, in his role as chairman of the House campaign committee, freely invokes Tip O'Neill's legendary truism, "All politics is local." But this is a year when what happens in Washington dominates local politics -- even in the district of the Republican congressman whose seat was supposed to be so safe he could mastermind efforts to hold the House majority.