"Man of the Year" 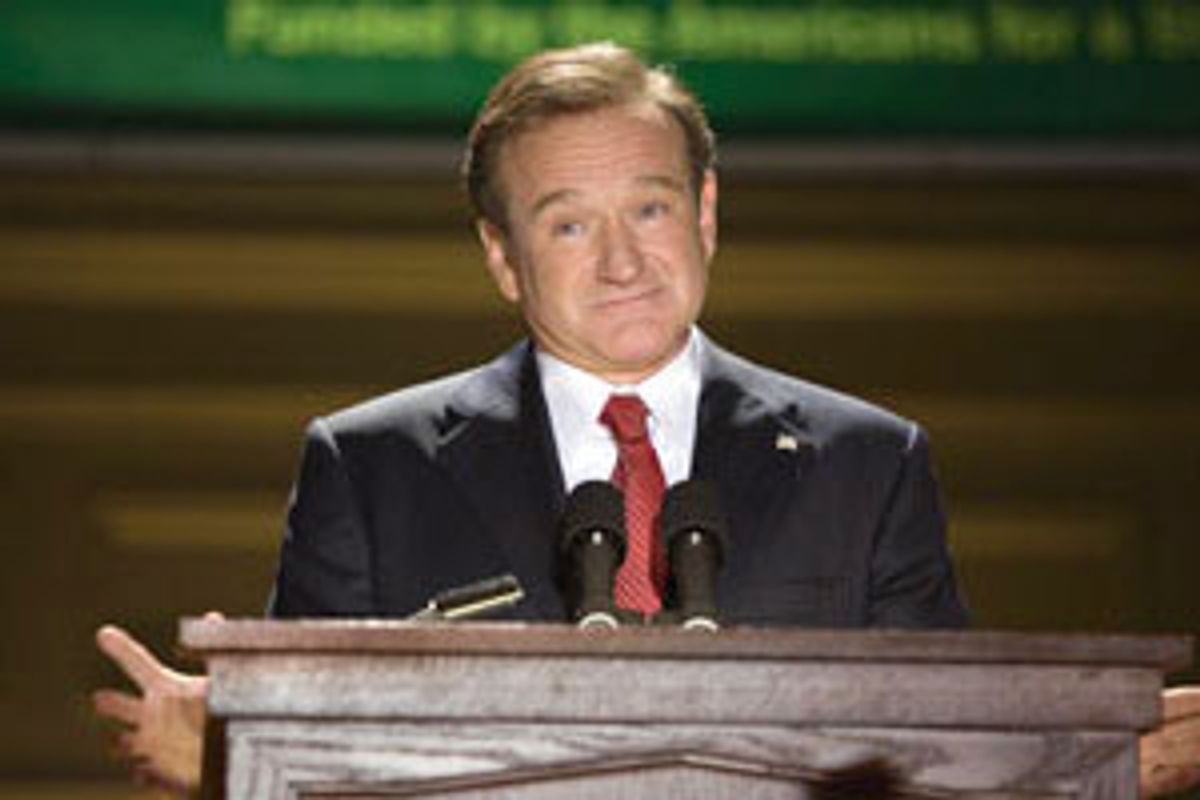 It's a comedy, a political thriller, a love story: Barry Levinson's "Man of the Year" tries to be all things to all people and fails on every count -- a little like the generic, ineffectual politicians it's pretending to excoriate. Robin Williams is Tom Dobbs, a Jon Stewart-slash-Bill Maher-style comedian who, on a lark, decides to run for president. His zany free-association platform, which includes squirrel impersonations and wisecracks about his ex-wife, captures the imagination of the American people, who, in the movie's view, are bored with the same old candidates and just want to hear some new ... jokes.

Dobbs is elected in the picture's first half-hour, which gives Levinson the rest of the movie to thrash about in an absurd subplot in which a plain-spoken programmer named Eleanor Green (Laura Linney) stands up for truth, justice and the democratic process -- you could call her the people's programmer. Eleanor works for the company that has developed the electronic voting system the government has just adopted (that company's name isn't Diebold, but it may as well be), and she's discovered a bug in the program that skews the election results. That means Dobbs isn't the president after all. The company's greedy top dogs (one of them is played by Jeff Goldblum) try to prevent her from making her findings public, first by hiding her favorite coffee mug and then by short-sheeting her bed.

OK, what they actually do to her is a little scarier than that. But then they sort of forget about her, remembering that they haven't revoked her access privileges only after she tiptoes into the company mainframe and starts mucking about. Damn, that minx!

"Man of the Year" isn't intentionally ridiculous: Levinson (who also wrote the script) expects us to take this stuff seriously, even though he's barely paid attention to the plot details. (He seems to have no idea he's fallen down on the job: He has one character quoting Mark Twain's assertion that the only difference between fact and fiction is that fiction actually has to be believable.)

Levinson doesn't really want to make a political statement here, offering little more than some vague "Mr. Smith Goes to Washington"-type mutterings about how the people want plain talk with no baloney. "Man of the Year" is so nonpartisan it practically slides off the screen: It's missing the glue of conviction. This is a political movie that works overtime to avoid alienating anybody -- and where's the fun, or even the sense, in that? We have no idea whether the incumbent who's unseated by Dobbs is a Republican or a Democrat; the point is that all politicians are the same. At one point Dobbs notes that the people voted for change for change's sake, as if that were a good thing -- forget about voting on the actual issues, or on a candidate's competence.

Williams is amusing here when Levinson unreels his tether and lets him natter off into outer space. (He has a great throwaway line about Angelina Jolie: "I just want to wet her lips and stick her to something!") But he's unbearable when he turns on the beatific high beams, grinning through his servant-of-the-people routine.

The most watchable actor here is Christopher Walken as Dobbs' longtime manager. His character's name is Jack Menken -- the "c" is conspicuously missing, but there's no doubt whom Levinson is trying to channel. Menken is the kind of guy who has a heart attack and continues to smoke; he relishes grim jokes about old-time cigarette slogans. (He quotes the advertising motto for "Old Gold": "Not a cough in the carload.") And because of that heart attack, Menken is confined to a wheelchair -- a grim joke by itself, considering Walken is such a marvelous hoofer. But he makes up for that infirmity by dancing with Levinson's silly dialogue: His lines spill out as if he were reading them off a teleprompter running inside his brain, but they're not rote -- they're dry, jazzy and syncopated. Walken is the only player in "Man of the Year" who has any style. He's the write-in candidate on a ballot full of losers.