What the former Virginia governor's surprising withdrawal means for Hillary, Edwards and the rest of the Dems vying for the Oval Office in '08. 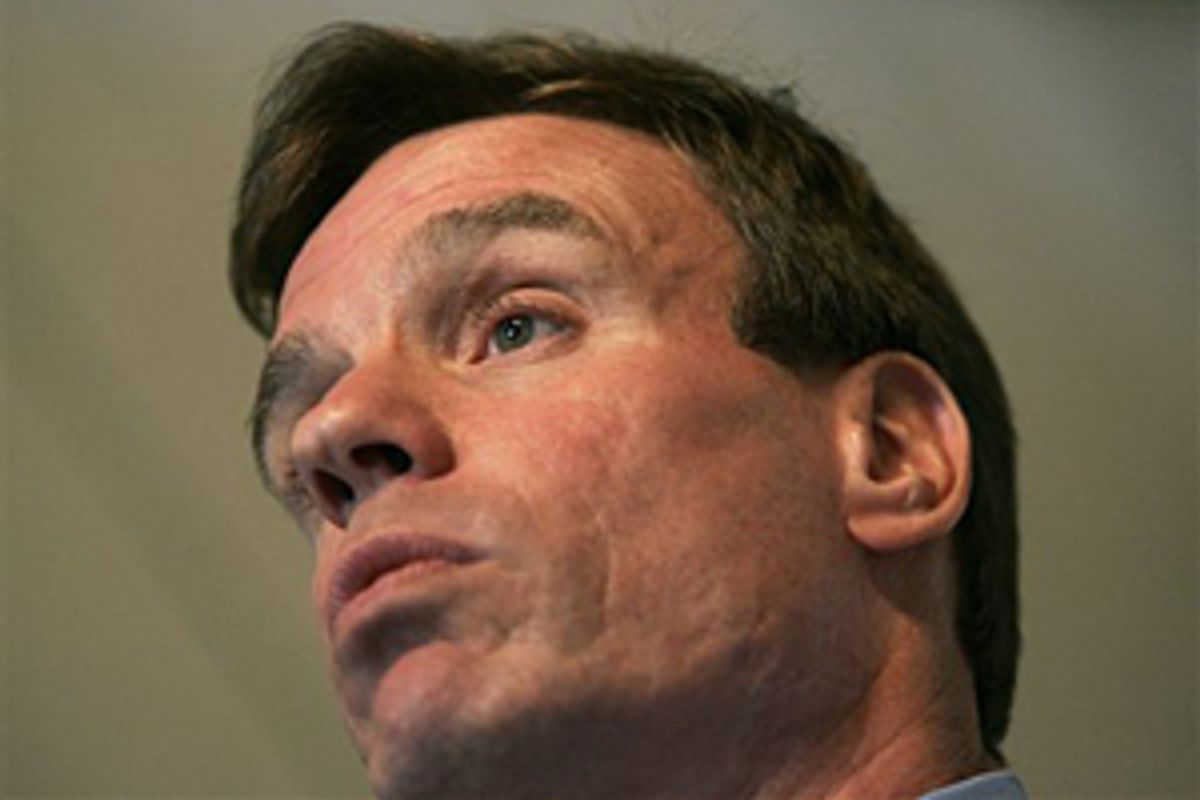 Mark Warner's explanation for his unexpected withdrawal Thursday from the Democratic presidential race ("I want to have a real life") did not equal Walter Mondale's 1974 classic rationale, "I don't want to spend the next two years in Holiday Inns." But the former Virginia governor's expressed reluctance to give up pleasures like college tours with his three daughters serves as a reminder that only monomaniacal candidates are ever elected president -- a chilling reality in the age of nuclear weapons.

Despite his negligible numbers in the meaningless early horse-race polls, Warner was probably the co-favorite, along with John Edwards, in the jousting to emerge as the anti-Hillary candidate in the 2008 primaries. Warner offered his desperate-for-victory party a successful red-state pedigree and an entrepreneurial how-I-made-my-fortune (Nextel) success saga. Small wonder that the Warner bombshell caught the Democratic political community by surprise. As a top consultant put it, "I've said from the beginning that some top-tier candidates wouldn't make it past September 2007. But I never thought it would be Warner and I never thought that the announcement would come now."

There is a natural tendency to be skeptical when a White House dreamer, who has been campaigning incessantly all year, suddenly declares, "And while the chance may never come again, I shouldn't move forward unless I'm willing to put everything else in my life on the back burner." But sometimes in politics, a cigar is just a cigar.

"Everybody has been calling around all day asking, 'What does it mean?'" said Steve Elmendorf, the 2004 deputy campaign manager for John Kerry. "What it means is that it is very difficult to run for president."

It is especially difficult for Democrats who are bracing to go up against the Clinton juggernaut. "It's good news for Hillary because I think Warner was the strongest anti-Hillary candidate," said Elmendorf. With a nine-digit personal fortune, Warner had the potential to donate enough money to his own campaign to neutralize the financial advantage that the New York senator would hold. Warner, who had launched a major effort to woo the Democratic netroots, would have been running as a moderate Democrat who, unlike Hillary, had artfully avoided angering the party's liberal base.

Edwards, the party's 2004 vice presidential nominee, is an immediate beneficiary of the Warner withdrawal. Not only is Edwards now the only likely candidate from the South (retired Gen. Wesley Clark has always been more the candidate from the Army than Arkansas), but he does not have to vie with a formidable Warner organization in South Carolina. The rejiggered Democratic 2008 calendar -- which begins in Iowa and then races through Nevada and New Hampshire -- gives the South Carolina primary a week all its own with no other delegate contests on the schedule.

Another name kept cropping up during my interviews with Democratic insiders after the Warner withdrawal: Sen. Evan Bayh of Indiana. Lou D'Allesandro, an influential New Hampshire state senator who backed Edwards in 2004, said, "It moves everyone up a notch." D'Allesandro mentioned Joe Biden and Chris Dodd, both veteran senators who have yet to gain traction. Then, he added, "It suddenly gives a guy like Evan Bayh, who people didn't have on their radar scope, an opening."

With Warner out of the picture, a major Democratic presidential fundraiser pointed out that Bayh could easily appeal to the Wall Street wing of the party, especially those donors who dislike Hillary and worry about Edwards' trial-lawyer populism. Anita Dunn, a Democratic media consultant who is advising Bayh, a former governor, argued, "It's a huge thing for Evan. People are looking for a new-face red-state governor -- and now there's only one left."

Technically, Iowa Gov. Tom Vilsack and New Mexico Gov. Bill Richardson, both eyeing presidential bids, can also claim Warner's mantle as a red-state Democrat, since George W. Bush narrowly carried both states for president in 2004. But Iowa and New Mexico, which went for Al Gore in 2000, lack the right-from-the-start GOP bastion status of Virginia and Indiana, two states that last voted Democratic for president in 1964.

Warner's departure from the Democratic scrum points up the danger of offering glib predictions about something as uncertain as presidential politics, especially 15 months before the Iowa caucuses. There are too many variables -- especially when you factor in the demons that would-be presidents wrestle with, sleepless at 3 in the morning, when there are no aides, no handlers and pollsters to consult. Staring at the ceiling in the dark, they presumably ask themselves how much are they willing to give up in the long-shot quest to become the 44th president.

Despite the shock waves from Thursday's announcement, Warner did give off hints that a presidential race in 2008 was not stamped on his desk calendar in indelible ink. Jim Jordan, John Kerry's former campaign manager who was advising Warner, recalled that the former Virginia governor had stressed last winter that a White House bid was not a certainty. Jerome Armstrong, who was overseeing Warner's Internet strategy, said about Thursday's decision, "I was surprised, but I wasn't shocked because the governor had not reached the level of committing to do this."

In mid-September, when I spent two days with Warner in Iowa, I detected a note of hesitancy in his voice when I pointed out that if he were successful in seeking the presidency, he would soon be shrouded in the bubble wrap of a security detail for the rest of his life. Warner said at the time, "I have thought long and hard about how this is as close to an irrevocable decision about the rest of your life." I carefully delineated all the if-clauses in his answers then about running for president. But even though I heard the talk, sitting with Warner in the back seat of a van in Iowa, the first caucus state, I could not bring myself to believe that he would not walk the walk.

Yet for a politician as successful as Warner, a self-imposed visit to the sidelines is rarely permanent. Warner made his announcement in Richmond, the capital of his home state where, by chance, there may be a vacant Senate seat in 2008. The Mondale model may also have occurred to Warner. In 1976, less than two years after he confessed to his distaste for Holiday Inns, Mondale was on the road as Jimmy Carter's vice-presidential running mate. Sometimes in politics the renunciation of ambition offers the best, if most circuitous, route toward realizing your dreams.