As much as I say "barf-o" to her perky "yum-os," I have to admit the frightfully popular TV host's quick and reliable meals can't be beat. 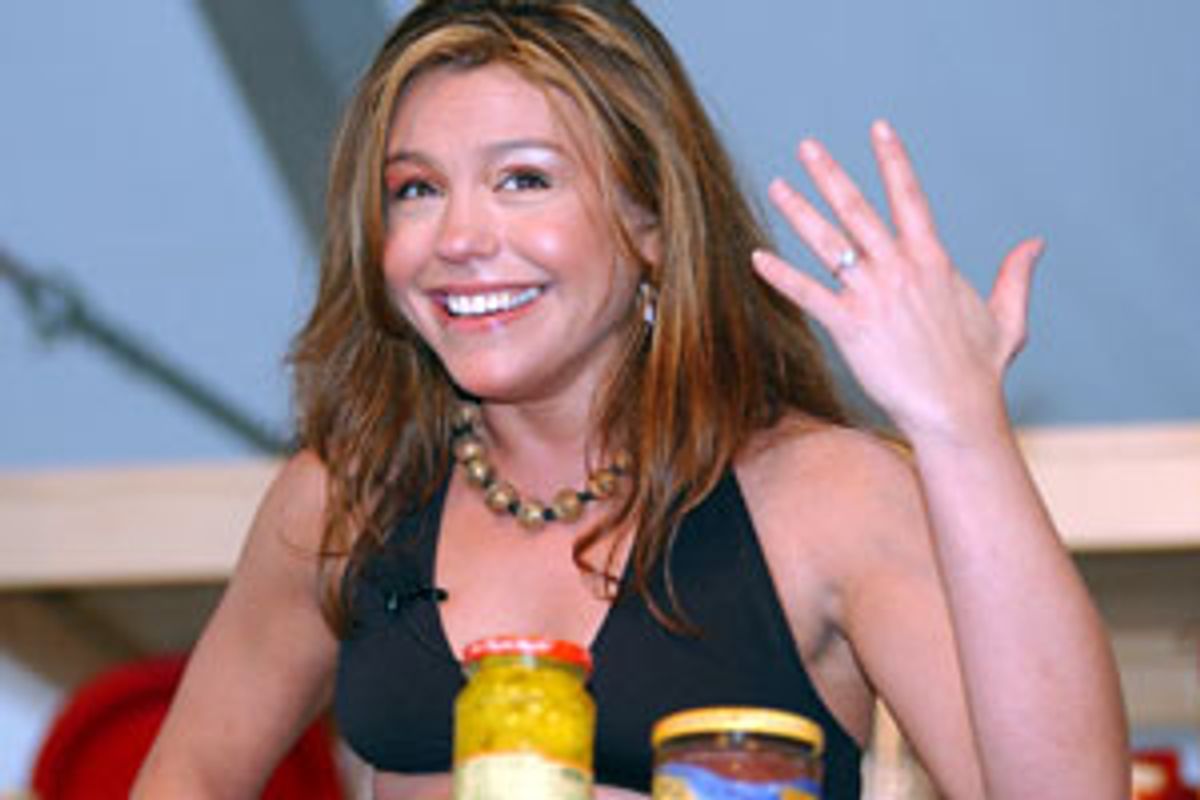 There is an entire industry built around the loathing of peppy media chef-phenomenon Rachael Ray. Google up "Rachael Ray" and "hate" and you'll uncover an enthusiastic community devoting considerable energy to "Raytard's" manic je ne sais quoi and dubious fashion sense. But does the "Joker faced" celebrity chef really merit that much scorn? This is a woman who, as far as we know, has never thrown a phone at an assistant, evaded her taxes, launched into any unfortunate, blood-alcohol-elevated tirades, or rapped at the Teen Choice Awards. If there ever comes a day that Rachael Ray is hospitalized for exhaustion, it'll be a safe bet that she really is exhausted. Why then is there such a thriving cult of antipathy toward the woman Forbes recently identified as the second most trusted person in America?

Because there are two kinds of people in the world. There are those who leap out of bed smiling and eager to start the day, the kind who come up with team-building exercises for their departments, who stay out late into the evening line dancing because it's just so darn fun, and who wake up again the next morning still smiling and eager to start the day. These are the kind of people who sell T-shirts on their Web sites that say "Yum-O." Then there are the rest of us, the ones who see people like that and want to barf-o.

Rachael Ray, the turbocharged personality who has built an entire career on the notion that anyone can pull dinner out of their ass in under a half-hour, has, in the past year, gone from high-profile basic cable star to full-blown media juggernaut. She is the face of her own magazine, the author of a string of bestselling cookbooks, and the host of approximately a bazillion Food Network series. In September, her eponymously named daytime talk show launched with the highest ratings for a syndicated debut since Dr. Phil hit the airwaves four years ago. Earlier this year, Time named Ray one of the 100 most influential people in the world. She has become, to crib from her bottomless supply of stock phrases, a big ta-da.

Hers is a quintessentially self-made American success story. Small-town girl and specialty food buyer hits upon the idea to teach "30 Minute Meal" classes as a way of moving the merchandise. The classes lead to TV appearances, which lead to cookbooks and a Food Network gig, which lead to guesting on "Oprah" and subsequent total media domination. Ray has no formal culinary training, and a brash willingness to embrace pre-washed produce and canned broth. She has boasted that she's completely unqualified for every job she's ever had. Unsurprisingly, she pisses a lot of people off.

Ray does not exist to wine you and dine you. She is here to wham-bam thank-you-ma'am you, an abundantly useful strategy. I may find her personality considerably off-putting. I may feel guilty for turning to her again and again at that certain hour of the evening when I need gratification. Rachael Ray is my dinner hooker -- fast, reliable, a sure bet. Her critics can bemoan the meteoric rise of the warp-speed dinner; they can turn up their noses at her "sammies" and burgers. But not every meal can be a truffle-infused work of art. Most nights, you're just grateful for a little culinary reach-around.

Therein lies the secret of her success. Perhaps she's a star because that breakneck energy and interjection-riddled vocabulary are genuinely appealing, although if that's the case I may have to move to another, far more dour corner of the globe. I prefer to believe she's made it despite the relentless ebullience, that she connects because she understands that for a whole lot of people, getting dinner on the table is a major accomplishment. You work late, you take care of your kids, you have no time to shop. You contemplate choking down a solitary Luna Bar or picking up a supersize bucket of trans fats at the drive-through. Rachael Ray says there's another option, and with her chipper, can-do attitude, she demystifies cooking. If she weren't sugarcoated to the gills, her message would be almost too tough to take. Suck it up, she's saying. If I can do it, you can to it. Take one lousy half-hour and get a hot meal together, for yourself and for your family. A real meal, preferably the kind with some lean meat and fresh vegetables. No expensive equipment or specialty store ingredients; no fancy French terms or techniques. No excuses.

My own relationship with Ray began in her early days on Food Network, when I was a frazzled new mother and the sight of watching people cook was the most soothing thing I could imagine. Her "30 Minute Meals" offered a warm and accessible personality, a regular gal who, like me, was just trying to get dinner made without having a nervous breakdown. I enjoyed the repetitive lull of her drizzling "EVOO" (that's extra virgin olive oil to you and me) "twice around the pan" night after night after night, even as her patter about Grandpa Emmanuel and Daddy's Cajun cred wore thin. Our bond was truly fixed, however, when I was pregnant with my second child, and I was helpfully gifted with one of her cookbooks.

It was a fascinating read. On the one hand, what legitimate cookbook author uses more exclamation points than a month's worth of Craigslist postings? Who in her right mind actually writes out phrases like "h-e-double-hockey-sticks" or "WHOA! I can't find the time to do all that!"? I, a semi-competent, fairly snobby home chef with a subscription to Cooks Illustrated, was appalled. On the other hand, the annoying chick delivered. Mere speed and convenience alone do not a successful recipe make, as anyone who's ever watched the Cool Whip-wielding nightmare that is Sandra Lee will attest. In contrast, Ray's roast leg of lamb was a crusty, garlicky hit, and her rosemary grilled chicken was, according to my mate, "restaurant quality." The last thing I made before going into labor was Rachael Ray's green minestrone. In the weeks and months that followed, her other cookbooks appeared on the shelf, and became battered and grease-spattered from constant abuse. She may grate on my nerves like a block of Parmesan on a blade, but dammit, she's my fix.

She wasn't always this irritating. Take a gander at the early episodes of "30 Minute Meals" that air regularly on Food Network, and you'll find a coherent personality putting together some pretty decent dinners. As her star has risen, so, apparently, has Ray's energy level and fondness for cutesy phrasing. The woman who could once do the "chop and drop" with a reasonable amount of serenity has been replaced by something resembling a hyperactive Red Bull addict going through a speed drill while delivering a stream of consciousness. Case in point: Her laid-back howdy-do of yore has been obliterated on her new show, which opens with a large metal gate parting to unleash Ray, bat-out-of-hell-style, upon the masses. As she patters a mile a minute and announces she's heading into her kitchen (emblazoned, à la Mary Richards, with the star's trademark monogram) to grab a cup of coffee, one can only pray that it's decaf. During the course of a recent episode, I heard the 38-year-old use the phrase "back in the day" twice in one minute, "awesome" in four staccato repetitions, and "girl" what felt like roughly 9,000 times. And when she settled down to nervously interrupt and giggle her way through the next interview, somewhere, I could hear the sound of a blogger's hands rubbing gleefully together.

But consider this: 66 percent of Americans are overweight or obese, while fast food and takeout consumption and portion sizes have ballooned. It's estimated that less than half of American families sit down to eat together every night. It doesn't take a genius to figure out how these things are related. So if the woman that Anthony Bourdain is not unjustified in referring to as a bobble-head can make dinner a little less intimidating, I can admit she may not be the antichrist. If she understands the vicissitudes of the dinner hour well enough to divide a recent tome into "Meals for the Exhausted," "Meals for the Not Too Tired" and "Bring It On! (But Be Gentle)," she can girlishly giggle herself all the way to the bank. And if, most important of all, a fair share of her recipes actually pass the taste test, she's welcome on my shelf any day.

Do the meals that have become my weeknight staples actually get made in under 30 minutes? Sometimes. My husband has been known to hopefully flip open a Ray recipe 30 minutes before he expects to eat, only to emerge considerably later, bathed in flop sweat and exasperation. But as Ray "eyeballs" her measurements, I do likewise with my time, and I can usually hit pretty close to her mark. The timing is realistically livable, and I'm not dialing for takeout or beating myself for not having a pot roast-compatible lifestyle. Our family sits down together. We eat our vegetables. We have time for the rest of the evening. The most frantic woman in America, ironically, brings a measure of peace and pleasure into my hummingbird-paced day. So I'll keep making Ray's seafood stew, her veal involtini, and, when the fear of a lingering, E. coli-related death leaves me, her spinach rolls. Just don't expect me to ever call them yum-o.